In his new role, Blake Meyers will be collaborating on plant… Expand ▸

It began with an article in the Chicago Tribune. As a sophomore studying biology at the University of Chicago in the spring of 1990, Blake Meyers read about how several Midwestern farmers were coming up with innovations in agriculture. The story highlighted an organic farmer in rural Missouri who was growing high-quality vegetables as well as fresh-cut flowers for the Kansas City restaurant market.

“At that point I knew I was interested in plants and so I wanted to get connected to agriculture,” Meyers said.

Meyers called up the farmer, Mark Marino, out of the blue. Meyers asked Marino if he needed help around his farm near Stover, Missouri, during that upcoming summer. He did. A short time later, Meyers found himself about 70 miles southwest of Columbia, helping grow more than 150 varieties of vegetables and flowers.

“It just seemed like an excellent fit. I could see how I fit at both institutions with my work, interests and personality. The joint position is a great opportunity to build collaborations.”
― Blake Meyers

“That was my first in-depth experience of agriculture and I would say it was a formative experience for me. I really enjoyed it. I loved the diversity, loved working with plants,” said Meyers, who would later go on to pursue both master’s and doctoral degrees in plant genetics at the University of California-Davis with an emphasis in vegetables. “Ever since then I’ve had a close investment in agriculture from the perspective of a plant biologist.”

Little did Meyers know he would be returning to Missouri 26 years later as the first of four hires as part of a joint faculty initiative to enhance globally impactful plant science research between the University of Missouri and the Donald Danforth Plant Science Center in St. Louis. The person hired gets to choose which department/division will be their tenure home, so in this case, Meyers chose to be a part of the Division of Plant Sciences in the College of Agriculture, Food and Natural Resources.

“This is something that we and Mizzou worked very hard on for the last year and a half,” Danforth Center president James Carrington said. “He represents a new milestone, a new page, or a new book, really, between the Danforth Center and Mizzou.

“Blake is one of the most energetic, smart, far-sighted and creative people that you’re ever going to meet in science. On top of that, he’s a heck of a nice guy.”

Under the arrangement, Meyers and his team of seven researchers will be housed at the Danforth Center, as a principal investigator. He also has a joint appointment as a professor in the Division of Plant Sciences, and will be conducting a variety of collaborative projects with his counterparts in Columbia. In addition, he will be making several trips to the MU campus during the academic year to give guest lectures and provide face-to-face advising with students. 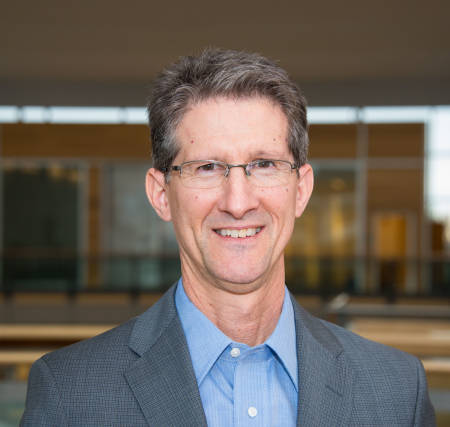 “It just seemed like an excellent fit,” Meyers said. “I could see how I fit at both institutions with my work, interests and personality. The joint position is a great opportunity to build collaborations.”

“The Division of Plant Sciences community is very excited about Blake’s recent arrival,” added Jim English, director of the Division of Plant Sciences. “Our faculty members are looking forward to working with him and exploring new ideas and avenues of study in plant biology research.  Our students will benefit greatly from Blake’s contributions to teaching and student advising.”

Meyers already has one MU graduate student, Suresh Pokhrel, on his research team. In the upcoming months, he hopes to be able to establish other opportunities for MU students, such as summer internships as well as distance-learning programs that will connect students and researchers at both locations. He is scheduled to give his first guest lecture May 5 at a plant biotechnology class, co-taught by David Mendoza-Cozatl and Zhanyuan Zhang.

“I’m thrilled to join MU,” he said. “My interactions with students, faculty and staff have all been wonderful and it seems like a great family to join.”

Meyers previously spent 13-and-a-half years at the University of Delaware as a professor in the department of plant and soil sciences. He is one of the foremost experts in the genetic analysis of small ribonucleic acids (RNAs) in plants — working in both a traditional laboratory setting and with computational bioinformatics. Starting nearly 15 years ago, Meyers earned national acclaim as a pioneer in the field of next-generation sequencing (NGS), also known as high-throughput sequencing, when he was funded as a postdoc at the University of California-Davis by the National Science Foundation to test a pilot project using the new technology.

“I had never been an RNA biologist prior to that, but it was a great application of the technology and got me interested with where we could go with this,” Meyers said.

Added Carrington: “Blake became relevant to everybody in science. He developed technology that allowed us to sequence vastly more DNA than what we did in the past and the tools that he developed rapidly became indispensable in the field to many, myself included.”

Before arriving at Danforth as both the president and a principal investigator in 2011, Carrington served as the director for the Center for Genome Research and Biocomputing and a professor of botany and plant pathology at Oregon State University. In 2002, Carrington was the first to identify and characterize the first small RNAs using Sanger sequencing, the precursor technology to NGS.

“We’ve been working in the same field, but never quite had a moment where we were working together on the same set of problems,” Meyers said. “And so now my lab is next door to his.” 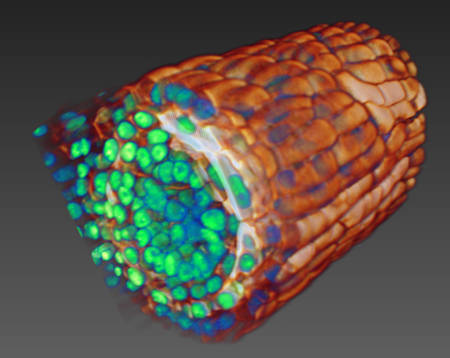 As Meyers puts it, the main mission of his laboratory is to discover the unique developmental regulatory steps in plant development which involve small RNAs. These steps are directly connected to reproductive biology and the genetic controls and switches, so to speak, that he believes plays a role in how healthy pollen is produced from anthers within the flower. “We’re hot on the trail of some really unique and interesting small RNAs that appear to be important for pollen development,” Meyers said.

At the moment Meyers and his team are collaborating with the laboratory of Virginia Walbot, a developmental biologist at Stanford University who specializes in anthers, “to really understand what small RNAs are doing to drive the development of pollen.” In addition, Meyers and his team are working on research relating to plant disease-resistance genes and the roles that small RNAs play in plant immunity.

His lab has traditionally focused on maize, soybeans, rice and Arabidopsis — the last being the universal model plant for his field of study — but his work in Delaware started to diversify to include other plants, recently including asparagus and strawberries.

One overall goal of his work, Meyers said, is to find ways to create a higher yield of crops with hybrid seeds. One way of achieving this is through a better understanding of the reproductive biology and the process of pollen development. “I think if we can facilitate hybrid seed production in different species, we have an opportunity to boost yield,” Meyers said. Another way is through a better understanding of plant defenses, and determining how to create a resistance to a broad spectrum of pathogens.

A ‘plan in motion’

In the spring of 2014, Carrington began to work with a team of MU administrators, including Hank Foley, the current interim chancellor who served as the senior vice chancellor for research and graduate studies at the time. That group also included Bob Sharp, director of the Interdisciplinary Plant Group who also serves as a professor in the Division of Plant Sciences.

“Before long it became very clear that if we pooled resources and pooled forces, we could do something that was bigger than what either of us could do on our own,” Carrington said. “So we envisioned a joint hiring program, envisioned something that would recruit superstars in the field, and we put the plan in motion.”

“The partnership with the Danforth Center will propel Missouri’s leadership in plant science research and education, and provide the next generations of plant science students with unique opportunities to address today’s and future challenges facing plant biology and agriculture,” Sharp added.

“Blake wanted to stay tightly connected to a university community and this provided an opportunity for him to do that.”
― James Carrington

With talks between MU and Danforth on full boil, Carrington met with Meyers in July of 2014 at the annual conference for the American Society of Plant Biologists in Portland, Oregon.

“That really piqued his interest even more because Blake wanted to stay tightly connected to a university community and this provided an opportunity for him to do that,” Carrington said.

It is the hope to have the other three hires in the joint arrangement made by 2017. Two of those researchers will be stationed at MU, while the other will be at Danforth. All three will be — in the words of Carrington — “intrinsically collaborative.”

The Danforth Center was founded in 1998 in St. Louis as a not-for-profit research institute with a mission to improve the human condition through plant science. Since first opening the doors to its main building in 2001, the center has continued to grow. This most recent expansion has a direct connection to the joint faculty initiative with MU, Carrington said.

“A lot of points of contact are happening today that weren’t happening a few years ago. I think this is a really important development that is impacting the work and the competitiveness of our scientists at both institutions,” he said. “We’re at this point where we’re looking ahead and defining what our future looks like, so the joint hiring initiative is part of defining what we’re going to look like in the years to come.”