A farm economist’s work is never done. But despite their ongoing projects, faculty and staff at the University of Missouri’s Food and Agricultural Policy Research Institute never abandon their above-and-beyond approach.

The institute kicked off 2016 by bringing in a slew of awards for outstanding policy efforts — highlighting its long-term initiatives in creating baseline projections for the farm economy and assisting farmers, economists and policy makers with the recent implementation of the 2014 Farm Bill.

Texas A&M awarded its Vice Chancellor Award to Westhoff and Peter Zimmel, FAPRI program director of the Representative Farms Project. The award highlighted the team’s more-than-20-year collaboration with Texas A&M’s Agriculture and Food Policy Center on the periodic Farm Bill. Zimmel, a Texas A&M alumnus, traveled to College Station, Texas, Jan. 14 to accept the award on behalf of FAPRI. The team was nominated by Parr Rosson, professor and head of the department of agricultural economics at Texas A&M.

“We’ve worked with Texas A&M since the late 1980s doing this type of policy,” Westhoff said. “The award encompassed the whole body of work, but it also focused on the implementation of the 2014 Farm Bill.”

FAPRI received the 2016 Outstanding Extension Program Award from the SAEA, a regional professional organization. The group accepted the award at the organization’s annual meeting Feb. 8 in San Antonio. The award recognizes FAPRI’s efforts on the planning and implementation of the 2014 Farm Bill. 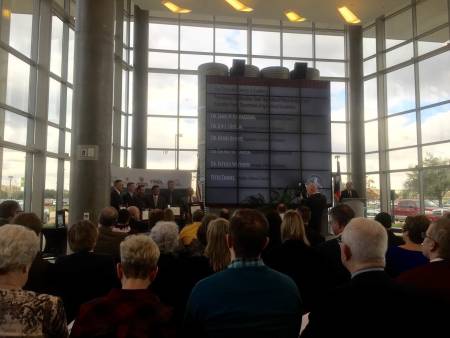 The USDA Economist Group awarded the Bruce Gardner Visiting Economist Award to Westhoff, highlighting his lifetime achievement as well as FAPRI’s work with the Office of the Chief Economist at USDA and his participation on the recent Farm Bill. Robert Johansson, USDA chief economist, nominated Westhoff for the award.

“Since 1996, Pat has been at FAPRI,” Johansson said. “For the [last] two decades, various entities of the USDA and Congress have relied on FAPRI’s un-biased analysis of farm policy changes when crafting the last five farm bills, as well as in many other capacities. That collaboration began as a way to share information between FAPRI and USDA and was formalized beginning in 2012 to provide the OCE with analyses on a host of agricultural issues affecting the farm economy.”

The team took an approach to the 2014 Farm Bill process that was different from what they have done in the past. The new Farm Bill had several options for producers to choose from, and FAPRI collaborated with Texas A&M to do everything they could to assist farmers to choose the best option for them.

“The whole 2014 Farm Bill had a big impact on farmers across the country,” Zimmel said. “They had decisions that they had to make as to which program in the new Farm Bill that they wanted to sign up for. So that’s what a lot of our efforts went into.”

In the past, FAPRI prepared five-year projections for about 10 commodities once every year for public resources. For the 2014 Farm Bill, the team produced projections for 21 commodities every month to provide farmers with the most up-to-date information possible. These farm economy projections were based off of approximately 100 representative farms located in around 25 states.

“Having to have this built into a program that we had to do on the fly was a bit of a challenge,” Westhoff said.

Covering a lot of ground

FAPRI developed an online decision aid that made it easier for farmers to understand each program and feel comfortable with choosing the best option for their farm. Along with baseline projections from FAPRI’s representative farms, the tool also built in the USDA’s price projections for producers to consider when signing up for a program. Zimmel estimated that about 50,000 producers across the country used their decision aid.

The institute also provided a technical support phone line which producers could call with questions about the Farm Bill programs and the decision aid. Zimmel spent many days manning the phone line and returning calls to producers nationwide to assist them with signing up without making the choice for the producer.

FAPRI held educational meetings locally and across the country to help explain the complexity of the new Farm Bill process and the tools provided through the decision aid.

“It is a daunting task for some of these producers to make these decisions because in the past is has been, ‘Here’s the program. You sign up for it,’ and potentially get a payment or not,” Zimmel said. “This time they had to make some decisions.”

On March 1, Westhoff will report to the U.S. Senate’s Agriculture Appropriations Committee on the status of the farm economy. He received the invitation to speak from Committee Chairman and U.S. Sen. Jerry Moran of Kansas.

“We work with Senate staff very closely, and we typically brief them at least once a year,” Westhoff said. “It’s rare that we speak to the members themselves, but here’s an opportunity where we’ll have a chance to speak to the senators.”

Zimmel will continue to reconnect with farmers and ranchers at representative farms nationwide with whom he meets every two to three years.