Did you miss the first airing of the ninth installment of our new Insight series? LISTEN NOW to the program or to the extended version of the interview.

Given Anne McKendry’s status as one of the world’s top wheat breeders, you might think that she uses state-of-the-art equipment to extract the small anthers of the male part of the wheat plant and place them into the female part of another plant. Then you see her pull out a set of trusty tweezers.

“It’s very high-tech,” McKendry says with a smile. “The only thing you have to really be careful about is that you keep track of them all.”

She specializes in soft red winter wheat, which is used mainly for sweets such as pastries, cookies and cakes — and even some beers. Missouri is usually in the top three states as far as annual production of this type of wheat, in spite of the fact that it is part of the western border of its growing region.

It takes as an average of 10 years to release a new wheat variety, often trying up to 400 different combinations of plant crosses “and then we’ll hit one that works,” says McKendry, who serves as an associate professor in the Division of Plant Sciences in the College of Agriculture, Food and Natural Resources.  Since arriving on the University of Missouri campus in 1987, McKendry has released 12 different varieties to the Missouri and national wheat markets, some of which are public releases with human names and some which have been kept proprietary.

Successful wheat breeders deliver lines that meet a variety of characteristics including strong yield potential, good end-use quality, environmental adaptation and resistance to relevant diseases. For years, McKendry has been able to do just that — all the while keeping farmers who use her varieties in mind.

“Our goal is to give them better genetics that they can then grow and make a profit from,” McKendry says. 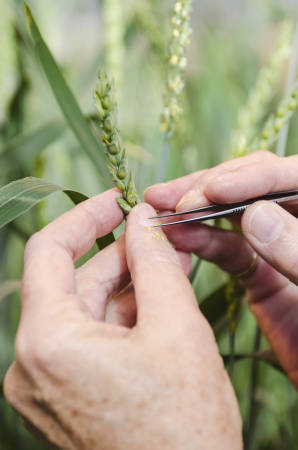 Anne McKendry is able to do all of her work crossing wheat plants using a simple pair of tweezers.

In 1993, McKendry began to tackle the devastating Fusarium head blight fungus (also known as “wheat scab”) following the aftermath of traumatic overall losses in Missouri in 1990 and ’91. In fact, the state economy lost a quarter of a billion dollars alone in those two years alone.

In susceptible varieties, the Fusarium pathogen grows in the plant’s head and reduces yield in every head that is infected. In addition to reducing yield as much as 80 percent, this pathogen also produces a mycotoxin that causes health issues in both humans and most animals.

“Seventy to 80 percent of the crop can look great today, but then two weeks from now, it can, and does, look like nothing,” McKendry says of the infected wheat.

Spores from the pathogen can cling to crop debris. If there is a constant rain when the wheat crop is flowering, those spores can splash up and infect the head at flowering time. Thus, the consistent rainfall in 2015 fueled another Fusarium outbreak across Missouri.

After years of research on her own, McKendry joined fellow wheat breeders and researchers in 12 other states in 1998 to form what is now known as the U.S. Wheat and Barley Scab Initiative, as a part of an effort to address a national and international issue of food safety and security. The Initiative receives funding from the U.S. Department of Agriculture and the Agricultural Research Service.

“Anne is as careful and conscientious a scientist as I know.  She has developed some remarkably scab-resistant wheat varieties through great skill and plant breeding acumen, augmented with a willingness to check and doublecheck and doublecheck again, the quality and robustness of the data,” says David Van Sanford, a professor and wheat breeder at the University of Kentucky who also co-leads the Initiative. “I trust Anne’s data without question and value her tremendous contributions to the U.S. Wheat and Barley Scab Initiative and to the entire wheat community.”

Given the many factors that she has to take into account when considering wheat, finding a plant that is genetically ironclad against Fusarium has proven to be a major challenge. “It  has really resisted us trying to find that Holy Grail of a plant that doesn’t get it,” says McKendry, adding that the Chinese first started to look for a cure for it in 1936. 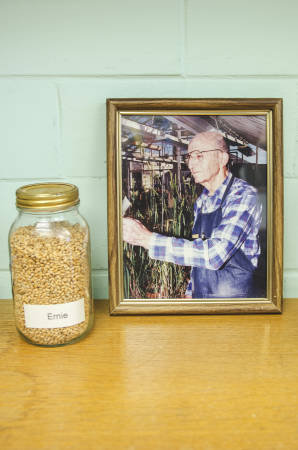 Still, McKendry has made considerable progress on that front, starting in 1995 with the public release of a variety called Ernie, named after Ernie Sears, a National Academy of Sciences member and renowned wheat researcher, who worked at MU for 50 years. Ernie lowered the losses associated with wheat scab from about 90 percent to 20 percent.

Sears passed away four years before the line was released. There was a brief debate on whether to call it Sears or Ernie. “We all said, ‘My gosh, he’d like Ernie, because that’s who he was to us.”

Another well-known public release was Truman, which came out in 2003. Truman futher lowered the losses associated with wheat scab risk to about 5 percent. McKendry is often asked whether the line is named after President Harry S. Truman (from Lamar, Missouri), or the Mizzou mascot. “Depends on your politics,” McKendry says with a smile.

Milton was her most recent public release in 2009, named after former MU agronomy professor John Milton Poehlman. Milton turned heads due to its “photoperiod insensitivity,” which allows it to be broadly adapted by in climates with both longer and shorter daylight hours.

McKendry’s latest release, initially labeled “MO 010804,” improved upon Milton’s photoperiod insensitivity by providing a higher yield potential and higher Fusarium resistance equal to Truman’s. It could make the biggest splash on the market yet.

MO 010804 has proven to out-yield other varieties all the way from Nebraska to the Atlantic coast to Upstate New York down to Louisiana and Georgia. McKendry will admit that the reasons why this line has done so well over such a wide geographic area are not well understood. “Adaption itself is something that is genetically quite complex,” she says of the line that could have the potential to cover up to a million acres in the U.S. annually in the upcoming years.

With the help of the Office of Technology Management and Industry Relations (OTMIR), McKendry and MU were able to enter into an exclusive licensing and marketing agreement with an international company for MO 010804. “I think Anne is the best-kept secret in Missouri as far as wheat breeding goes,” says Nancy Parker, a licensing associate at OTMIR who has been working with McKendry since 2012.

The source of her concern 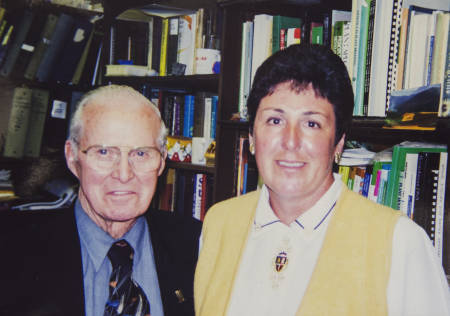 While working on her undergraduate studies at Queen’s University in her hometown of Kingston, Ontario, McKendry had plans of becoming a biology or chemistry high school teacher. She discovered her passion for addressing global food issues, though, from 1976-79, during her stay in Nigeria as part of the Canadian University Services Overseas organization (the Canadian equivalent of the Peace Corps). At the time, the Federal Military Government of Nigeria was encouraging citizens to grow their own food in an initiative that was called “Operation Feed the Nation.”

In 1987, while still not finished with her Ph.D., she came down to MU for an open position “simply to get some interview practice” and to meet Sears. “Much of what we know about the wheat genome came from his research,” she says of the man whose office would be just down the hall from hers.

In spite of his accomplishments, Sears was a very humble man, McKendry says, who often could be found in a plaid shirt and denim apron. McKendry tells the story about her parents’ visit from Ontario soon after she had started at MU. When they arrived on campus, Anne was not yet in her office to greet them. 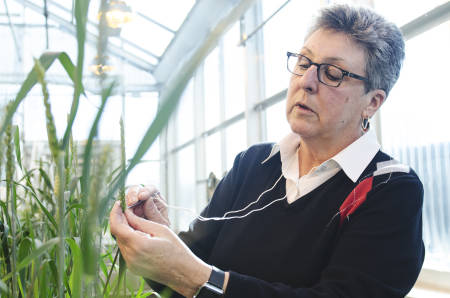 She was surprised to find them in her office upon arrival, because a friendly “janitor” had let them in. “He had been the man who had let them in. My mother never forgot it and was terrifically embarrassed, while Ernie was just delighted,” McKendry says.

Ten years after his passing, in 2001, the Sears Greenhouse was opened in his honor. The building houses McKendry’s working area where hundreds of wheat plants grow before moving onto her plot of land at the Bradford Research and Extension Center.

And even though the MO 010804 line has barely been out on the open market for a year, McKendry glows when talking about the possibilities of one of its offspring.

“The next line is even better,” McKendry says. “And that’s what we do. You release something. It’s out the door and then we try to beat it.”