Did you miss the first airing of the eighth installment of our new Insight series? LISTEN NOW to the program or to the extended version of the interview.

It was a study that was borne out of frustration in a restaurant in Portland, Oregon. In 2007, Laura McCann, was there attending the annual meeting of the American Agricultural Economics Association when she came across a dual-flush toilet in the women’s restroom that suffered from a lack of an intuitive design: It required the user to push down for a full flush and up for a half flush.

“It was so stupid,” McCann recalled. “I said to myself ‘I can’t believe that they designed it that way, that you have to push up for the low-flow option.’”

That experience served as impetus for a study that McCann, who serves as a professor of Agricultural and Applied Economics in the Division of Applied Social Sciences, conducted with one of her graduate students, Jade Arocha, four years later in 2011. The study, which was recently called “one of the most readable academic studies of all time,” in a recent article by the Houston Chronicle was published in American Water Works Association journal in 2013.

Setting up the study

For the study, special flush-counting sensors designed by the MU Engineering Lab were installed on eight Sloan Uppercut dual flush toilets in eight separate women’s toilet stalls in Columbia’s new City Hall, a building which features dual-flush toilets as part of its LEED (Leadership in Energy and Environmental Design) certification.

The toilets used in the study uses 1.6 gallons when someone pushes down (generally used for a “No. 2”) and half that amount when pushed up (for a “No. 1”). According to research done by Sloan, there is generally a 2:1 ratio (67 percent) between pushing the handle up versus down. After collecting data for seven weeks, though, only 26.6 percent of users were up flushes. Thus, people were incorrectly using the toilets, which only featured small instructional signage on the handle.

“I think if somebody had it in their house, they would figure it out,” McCann said. “What I particularly don’t think is a good idea would be for this to be in public areas where people don’t have a chance to learn and develop a new habit.” 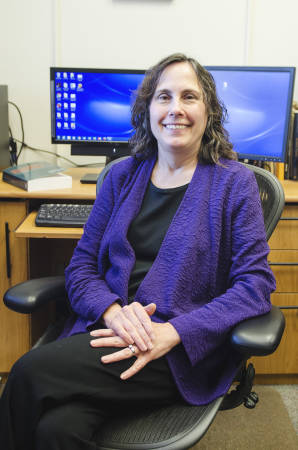 Furthermore, based on the research, McCann recommends that if people are seeking an alternative toilet system, to buy a low-flow toilet, which uses about a half of a gallon less water than a regular toilet. In fact, low-flow toilets have become state requirements in California and Texas.

The heart of the matter

Like this study, much of McCann’s research relates to behavioral economics, which integrates both economics and psychology in an attempt to better understand human behavior and how people make decisions. It stems from the notion that people don’t always do the right thing for a variety of reasons, so providing a decision-making environment that facilitates making better decisions is important.

“There’s this whole area where the actions that we do are automatic,” McCann said. “We don’t even think about them.”

The most famous example is when companies automatically enroll employees in a savings retirement plan and let them opt out instead of opt in. Or take food, for instance. In his book Mindless Eating, Brian Wansink, a professor at Cornell University, shares all of the various traits that accompany eating decisions such as the fact that people make 200 food decisions a day without realizing them all and will eat less food if given smaller plates. 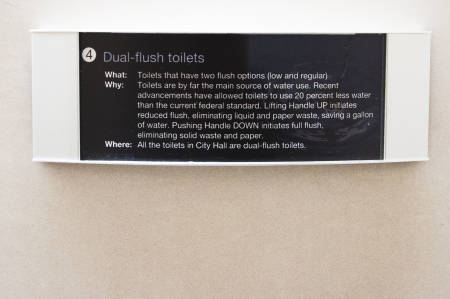 For several years, McCann has run a research program that relates to the adoption of environmentally friendly practices — and extends into behavioral economics. The program was created after she and a graduate student, Michael Stahlman, determined through a survey that area livestock farmers were unknowingly using an enzyme called phytase in their supplemental feed that is beneficial to both the animals and the surrounding environment. According to their study, only 17 percent of farmers knew that they were using it.

‘There’s no habit there’

In the case of the dual-flush toilet study, the action of guiding people to make the right decision to use less water when flushing became overshadowed by a general lack of usability — and simply not knowing the user. “The biggest issue from this research is that how people actually behave needs to be incorporated into the design process,” McCann said, “and I think that findings from behavioral economics can help in improving the design of fixtures as well as all kinds of situations.” 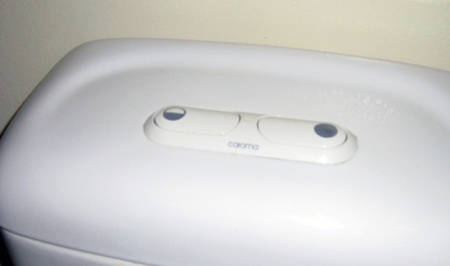 She also suggests there may be an underlying gender issue if most dual-flush toilets are designed by men, but are mainly used by women — given that they are not as common in men’s restrooms because of the prevalence of urinals.

Dual-flush toilets can be found all over the world, McCann said. Most of them have a much more intuitive design such as the Caroma brand in Australia that show a half circle for a half flush and full circle for a full flush. “You have to make a choice. There’s no habit there. Designers need to know their users,” she said.

Other toilets have a small square button in the middle of a large button. McCann said she was at an engineering school in France where none of the women graduate students knew that the toilet was a dual flush. “They always pressed the big button,” McCann said.