Did you miss the first airing of the eleventh installment of our new Insight series? LISTEN NOW to the program or to the extended version of the interview.

They are all around us, raising trouble in their wake. They are so small, though, and silent that most of us have no idea they exist. But not Judy Wall. As a Curators Professor of Biochemistry who has been at the University of Missouri since 1978, Wall has spent her career driven by the fascination of microbes that corrode ferrous iron metal — among their list of crimes.

Wall started her career studying hydrogen production for a number of years before switching her focus to these microbes that can only live in the absence of air. “I then realized that these microbes also have a huge deleterious impact on human activities that we don’t even think about, we just pay for it,” Wall says. “We’re so used to it. We don’t pay any attention to it.”

One of those forms of payment came in the mid ’80s when every gas station in the U.S. had to switch from bare steel storage tanks to plastic or fiberglass tanks to prevent gas leakage from corrosion caused by the metabolic processes of sulfate-reducing bacteria, which has been the focus of her research for many years.

It turned out that this type of bacteria — that she affectionately calls her “bugs” — lives in water and plays an important role in the methylation of mercury in the environment, a process that produces a deadly neurotoxin.

After mercury is emitted into the atmosphere through burning coal and volcanic eruptions, it is oxidized and then comes back down to the earth’s surface as ions in rainwater. The mercury then becomes methylmercury in the sediment of waterways, such as rivers and lakes, where it is taken up by aquatic organisms such as phytoplankton, which are then eaten by fish. As the food chain progresses, methylmercury accumulates along the way.

Therefore, the main way humans and animals get exposed to it are through eating fish and other forms of seafood. When ingested at toxic levels, methylmercury can cause serious health issues, such as birth defects, neuropathy in the hands and feet, and disorders of the brain, reproductive system, immune system, kidney and liver.

Wall does not have a list of exact freshwater or saltwater fish to avoid on a regular basis to lower the risk of methylmercury exposure. Instead, she says to go by one mantra alone: “If the fish is old and big, then I shouldn’t eat it. 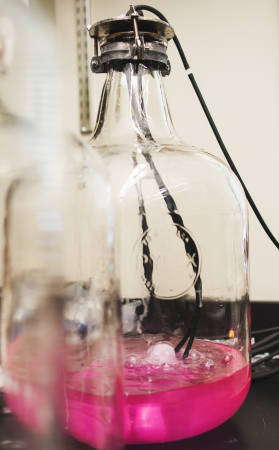 “Top predators are what we like to eat. As long as you are eating top predators, you are getting the highest magnification of the neurotoxin,” Wall says as she flips through the pages of a recent Missouri Conservationist magazine. She comes across a picture of a 120-pound catfish. “So it’s talking about the big guys that have been caught here,” she says. “It did not get that way in two years, I suspect.”

She adds that she recommends visiting the Missouri Department of Health and Senior Services website and search for the Fish Advisory to keep up to date with the current suggestions for consumption of fish that are found in Missouri for “sensitive populations.” In this case, that would be pregnant women, women of childbearing age, nursing mothers and children younger than 13.

In addition, Wall also suggests checking out information on mercury levels in fish and corresponding warnings on the U.S. Environmental Protection Agency and the U.S. Food and Drug Administration websites.

“There are a lot of benefits with eating seafood, so you have to be careful to have a balance,” she says.

Wall has been analyzing the production, elimination and the overall effects of methylmercury on the environment for about six years now. She was first approached by Tony Palumbo, a scientist at the Oak Ridge National Laboratory (ORNL)in Tennessee, about a project there.

Palumbo was the lead investigator for a research focus area that was competitively funded by the Department of Energy to understand the effects of clean-up procedures and decontamination of the land around the laboratory, which is about a five-hour drive from Wall’s hometown of Pfafftown, N.C.

Oak Ridge had been a weapons productions site for a number of years. As a result, a number of contaminants had been generated and were found in the soil, including uranium, nitric acid and mercury. The DOE began to raise questions about the proper way to manage the cleanup — for some of the toxins, that question couldn’t be answered. 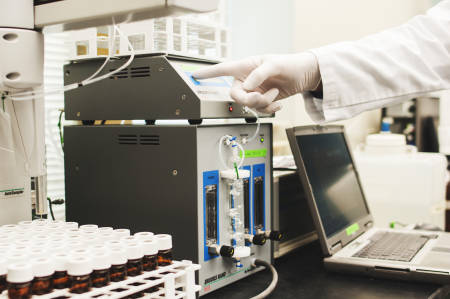 Palumbo was aware of the array of tools Wall and her team had created in her laboratory in Schweitzer Hall relating to the genetics of microbes and the identification of the parts of proteins involved in the catalytic reactions that turn mercury into methylmercury. At the time she was asked to participate, she did not realize that the microbes she worked with were those most active at making methylmercury.

Since that time,  the ORNL team in association with Wall’s lab have come up with a series of discoveries relating to the deadly neurotoxin. For one, it has been determined that the genes associated with methylmercury are rarely found within the human microbiome, so outside of drinking a large amount of water from a body of water, the only way to get exposed to it is through the consumption of seafood.

Wall did mention a finding that came out a few years back, in which the creation of organic rice syrup, which was being marketed as an alternative to high fructose corn syrup, had been found to be a source of mercury and arsenic. “It is demonized, but we have a lot of data that it isn’t going to be killing you tomorrow,” Wall said about the fructose corn syrup, “whereas, for substitutes, we don’t often have the data to know.”

From their research, Wall and associates determined in 2013 that there were two particular unique genes that had to be present in strains of the microbes that made methylmercury. “That was the first time that we actually knew the biochemical enzyme necessary for actually methylating the mercury,” says Wall, who was named as a recipient of a Southeastern Conference Faculty Achievement Award in 2014.

With that knowledge, Wall has been able to successfully edit the genes out of the bacteria inside her lab. In addition, the ORNL team was able to provide one of the fully sequenced strains, called ND132, to the scientific community to become a focus of study for mercury methylation.

From the genetic data gathered on the so far, Wall and her collaborators at Oak Ridge have been able to send data to a computer-based modeling system, which will attempt to predict the length of the life cycle of mercury and quantify the number of organisms that are methlyating mercury in a given environment. Wall stresses, though, that these data are in their infancy. “We can begin to see in various contaminated environments how many of these copies of genes we have present,” Wall says.

“All of the contributions that we’re making are to provide the tools needed to be able to evaluate the potential of our environments to produce this neurotoxin. The ultimate goal of the research is to limit the effects of mercury contamination.”