Did you miss the first airing of the fifth installment of our new Insight series? LISTEN NOW to the program or to the extended version of the interview.

From the backside, the machine that is the prized possession of Peter Sutovsky’s laboratory in the Animal Sciences Research Center at the University of Missouri may look like a souped-up all-in-one printer. In spite of its modest appearance, the next-generation FlowSight flow cytometer has put the lab in select company.

“It really brings the lab to a whole new level and gives us a lot more capability,” Sutovsky said. “Typically you find this in a core facility, not in a single laboratory. We do so much work on flow cytometry here that we pretty much run it daily, so it gets a great deal of use here.”

A traditional cytometer takes a given sample and counts cells that are labeled for a positive biomarker that has been rendered in a fluorescent dye and detectable through a laser. The new machine goes one step further by taking individual pictures of all of the cells, allowing it to take nine to 12 pictures of each cell at a speed of up to 2,000 cells per second.

The combined rapidity and accuracy of the analysis has opened up new doors for Sutovsky, who serves as a professor of reproductive physiology in the Division of Animal Sciences. Since he arrived on campus in 2001, Sutovsky, who also serves as a professor of obstetrics, gynecology and women’s health in the MU School of Medicine, has been studying the connections between human and animal fertility — in particular those related to biomarker-based sperm analysis, by looking for molecules associated exclusively with defective sperm cells.

“The general mechanisms of sperm cell function are similar or shared between humans and animals,” Sutovsky said. “So we can learn about one from the other.”

In both realms, there are numerous instances when bad sperm looks like good sperm under a traditional microscope, requiring a more accurate level of analysis to both unambiguously evaluate for fertility in livestock male animals (in this case, bulls and boars) while at the same time, being able to better diagnose infertility in humans. 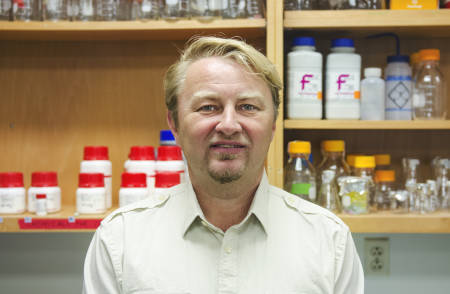 On the animal side of this translational medicine conversation, common artificial insemination (AI) practices are often affected by low sperm quality. Another popular method, semen sexing, allows farmers to get more female calves and piglets, but it can be damaging to sperm, thus having a direct impact on the costs of animal production. Furthermore, bulls and boars that are genetically superior sires are valued due to production traits, but not selected for reproductive traits. Therefore, in some cases producers may be selecting against good fertility.

On the human side, currently there are approximately 500 infertility clinics administering more than 170,000 treatment cycles a year, Sutovsky said, costing approximately $2.2 billion a year in the U.S. alone to face an issue that affects close to 20 percent of the country’s population.

Along this line, Sutovsky was the first researcher in his field in 2009 to take the new-generation flow cytometer to develop a way to conduct a quick analysis on a sperm sample to determine whether a male partner from a given couple is infertile or if a doctor should focus treatment on the male or female partner. 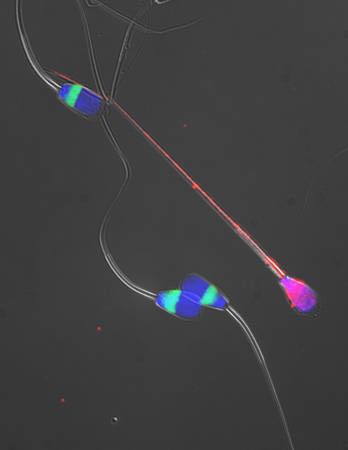 A flow cytometer counts cells labeled positive for a given biomarker that has been rendered in a florescent dye. Photo courtesy of Peter Sutovsky.

Furthermore, the derived analysis also can help a doctor determine what the treatment option should be, such as in vitro fertilization (fertilizing a mature egg with sperm in a laboratory) or intrauterine insemination (placing sperm into a woman’s uterus when she is ovulating). “It helps you in the decision making,” said Sutovsky, whose most recent paper on the subject was published in the Asian Journal of Andrology in May of last year.

The power of magnets

But not all of Sutovsky’s findings have come through state-of-the-art technology. His innovative work with nanopurification involved only a test tube and a small magnet. In 2007, he discovered that metal particles coated with certain defective-sperm binding molecules, when mixed with semen, bind only to defected sperm cells.

So, a special type of nanopurification magnet can pull the bad sperm down, while the good sperm stay on top, when placed below the test tube. The good cells can then be easily skimmed from the top and processed for AI use, while the defective sperm that produce potentially harmful (to other sperm) substances are discarded.

“What we can do is actually have a probe that binds to that defective sperm associated-molecule and instead of attaching it to a florescent dye we attach it to magnetic nanoparticles,” Sutovsky said.

The resulting nanopurified semen would later undergo a series of trials when Sutovsky ended up working the U.S. Department of Agriculture for two years (2011-12). During that time, 798 cows were inseminated with the nanopurified semen. Their findings resulted in the dosage of semen being cut by half to produce near the same pregnancy rate of approximately 65 percent, using 10 million nanopurified sperm per dose instead of the usual 20 million raw (as in “not purified”) sperm. 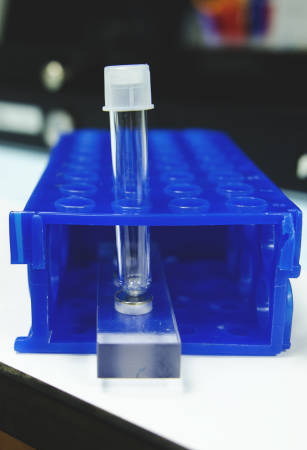 “That means from the most precious sires, the most valuable bulls, we could make more doses,” Sutovsky said.

The findings were published in September 2014 in the Biology of Reproduction journal and were presented at the 2014 USDA Agriculture Outlook Forum and at the inaugural Gordon Research Conference for Nanoscale Science & Engineering for Agriculture & Food Systems held in the Boston area last June.

A team of researchers has since adapted the nanopurification method to boar semen at Mississippi State University. In addition, there are several clinical collaborators who are now trying to adapt this method for human fertility by using it to preselect the best sperm cell for injection.

Another byproduct of his research was the development of an inorganic pyrophosphate (PPi) additive that essentially makes what Sutovsky calls “super-charged sperm” that can be added to semen sperm cells just like an electric booster motor to a high-performance gasoline-powered sports car. He has been validating his work using the modern FlowSight machine, adding that this is “the beginning of the point of discovery” as another way to fight on both fronts in the war against infertility.

“It could be fully useful for livestock and for humans,” Sutovsky said, “so this could improve the shelf life of semen and improve the ability to fertilize.”