Mark Kloeppel, center, serves both as the frontman of the… Expand ▸

To some, the sound of extreme metal music might come across like a cacophony of distortion and inaudible guttural vocals. To the ears of Mark Kloeppel, though, it’s a symphony in which he can hear each instrument and discern every throaty lyric. 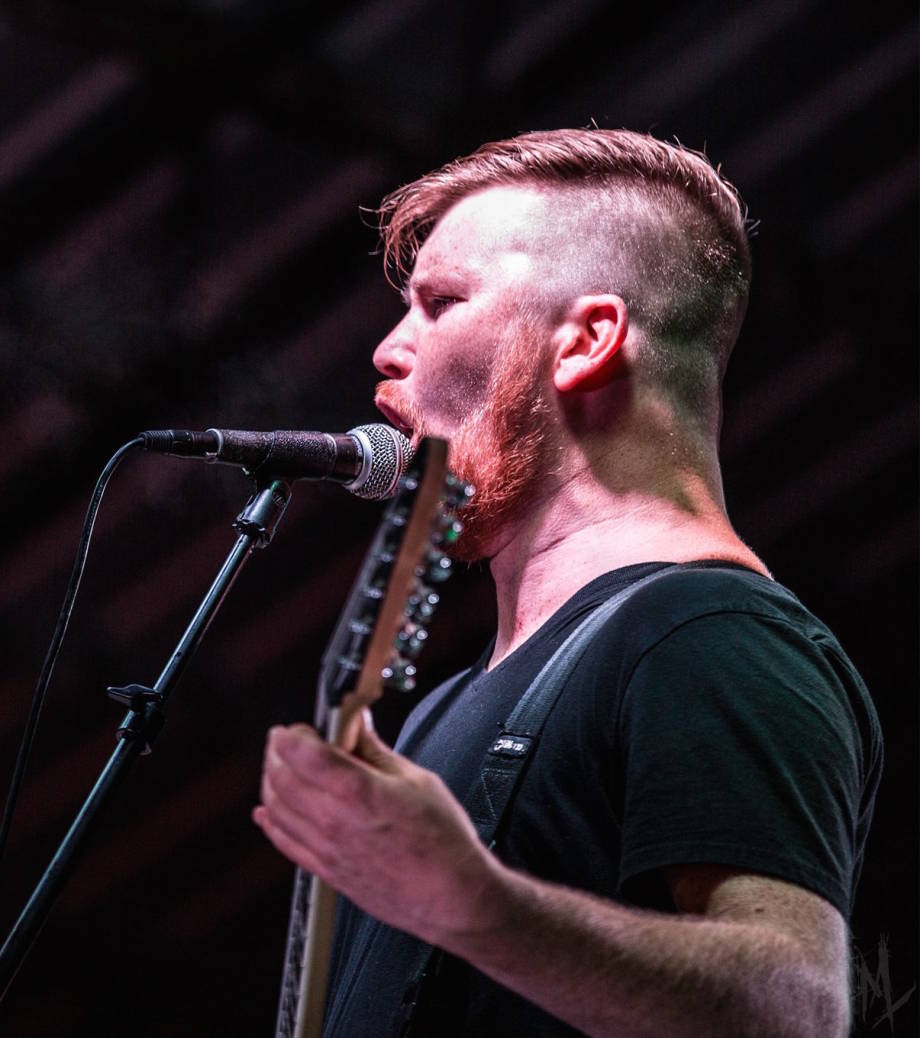 Mark Kloeppel has been a part of the death metal band Misery Index since 2005. Photo courtesy of Jeff Christopher.

“I can remember very clearly when I was listening to music and I started to be able to hear the individual instruments by just picking them out,” says Kloeppel. “You start digging in with in your ear and it starts forming in your mind, like you can almost see the ensemble… I don’t think anyone who listens to metal can’t hear all of the instruments that are going on. Like with any music, it’s just this process of being able to break it down and understand the elements and why they’re there and how they’re there.”

The idea of an ensemble is appropriate metaphor for Kloeppel’s life at the moment, with many elements resting along a complex continuum. There’s the graduate student in the department of parks, recreation and tourism (PRT) in the School of Natural Resources taking an academic look into the tourism culture behind metal festivals. Then there’s the Mark who, since 2005, has been a member of Misery Index, a death metal band with an international following who tours around the world. Then there’s the part of the family man with a wife and young child in Columbia.

And somehow Kloeppel keeps the song going by seamlessly balancing all of the elements. Case in point: He recently returned from a lengthy U.S. tour. During that time, he did not miss any classes, meetings with his master’s thesis advisor, Grace Yan, or the Oct. 30 birthday of his 4-year-old son, Avi. How did he make it through, in his words, “a logistic nightmare”? By coordinating days off, finding cheap flights, and then typing sometimes as much as eight hours a day in an impromptu office in the back of a van —before playing a show, of course.

Away from the stage — where he regularly encourages and channels the energy from his band’s fan base — Mark the graduate student is usually calm and quiet when immersed in academia. “Yeah I’m pretty reserved most of the time, but I when I get on stage, I know what’s required of the context,” he says. “I always feel the same. I’m always carrying around my experience, but it would be entirely out of context to act like a frontman in the classroom.”

“He’s someone who cannot be further from the generic assumption that you have as an extreme medalist,” says Yan, assistant teaching professor in PRT.

Yet, when he started his master’s program, he was encouraged by Yan to combine those two worlds. The idea was to provide a very unique perspective and insight into a genre of music that has been the focus of only a finite of academic research in spite tracing its roots back to the ’70s. Yan eventually asked Kloeppel how he could relate his cultural experiences to academics, following the initial thought of focusing his thesis on the history of extreme metal itself.

Yan, whose favorite music includes the classical works of Frédéric Chopin and the class rock of the British group Dire Straits, was fascinated by the narrative and insight that Kloeppel could provide since first joining Misery Index in 2005 in spite of her very different tastes in music: “Wrapping my head around Mark’s music is somewhat of a unique experience for me.” 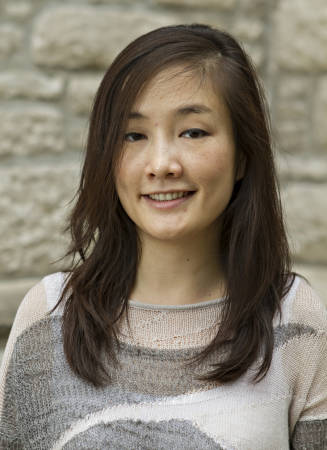 It was determined that Kloeppel would form his first academic paper around five interviews during last summer with extreme metal festival producers in Europe, where hundreds of thousands of people converge each year.

“It’s a big circuit in the summertime that I’m pretty familiar with,” Kloeppel says. “These are tourist events. People are traveling from all over the place to get there and so that’s sort of the justification for looking at this kind of thing.”

Using an academic approach called Lacan’s gaze (named after French psychoanalyst Jacques Lacan) to examine the festival management experiences of the five producers, Kloeppel found several common ties between them — in particular the ongoing conflict to sustain a culture that is proudly transgressive and anti-capitalist at its heart while still selling tickets, generating revenue and running a business. Misery Index’s name comes from the term that was coined by U.S. economist Arthur Okun, calculated by taking a country’s unemployment rate and adding it to the inflation rate.

“If approached staunchly it’s a hypocritical dilemma. How can you possibly be anti-capitalist and sell things, right? But that’s what you’re faced with and you have to navigate those waters, so to speak,” Kloeppel says. “It becomes a negotiation and a compromise and it’s like that on many levels.

“If you think about metal, it’s basically a reaction to things that are wrong. It’s accepting things not being right and being oppressive towards you as a person and screaming about it.”

One of those producers interviewed runs a festival in Belgium rooted in ecological concerns that go beyond traditional business motives. Thus the festival features items such as composting toilets and vegan food options.

“They all seem interested in being cultural arbiters,” Kloeppel says of those he interviewed. “They want to keep it going. They feel since it’s a transgressive culture it’s always under the pressure of being squeezed out of existence. Many of them are enforcing some staunch ideals.”

‘It reflected what I felt inside’

Before any of his success as a metal musician, Kloeppel was a sixth grader in Wentzville, Missouri, with a friend, Andy Huskey, who had an older brother who listened to metal bands such as Slayer, Pantera, Faith No More and Megadeath. Andy introduced Mark to a musical world alien to his own up until that point.

“I heard Pantera for the first time and it was the most crazy thing I had ever heard in my life; I just really kind of identified with it,” Kloeppel says.

Suddenly the 12 year old who had grown up in a broken home had found an outlet to cope with his feelings. “It was dissonant atmosphere and I didn’t have a lot going on in the area to really identify those emotions with,” Kloeppel says, “and so when I heard that music it reflected what I felt inside, so I just sort of got addicted to the distorted guitars and the admission of emotions, I guess.”

Quickly after that introduction, Mark (armed with an off-brand electric guitar) and Andy (with his brother’s drumsticks) put a tape recorder on the ground and started jamming. This partnership lead to Kloeppel’s first band in eight grade by the name of Hostile Aggression.

Kloeppel would go onto be in several successful metal bands in the St. Louis area, before he found himself at MU in the fall of 2000 as an undergraduate student to honor the request of his father, who had saved up money for him to get his degree. After earning an English degree in 2004, he went back to pursuing his extreme metal aspirations full-time with a black and death metal group named Cast the Stone, formed while he was at MU. 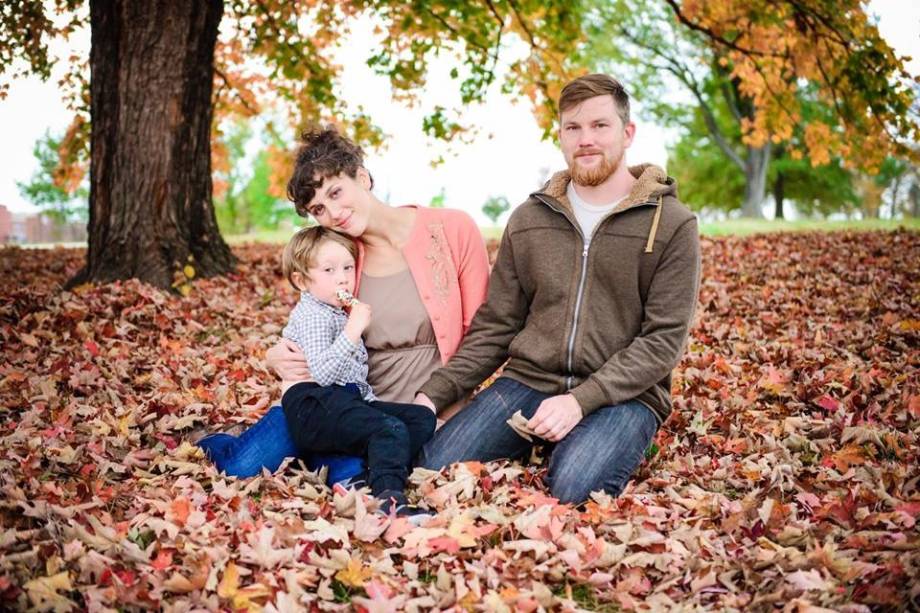 Later that year, Misery Index was looking for a new vocalist and guitar player after one of the founding members, Mike Harrison, went in a completely different career path and took a job with Apple. As luck would have it, the band’s new drummer, Adam Jarvis, is a native of Troy, Illinois. He had known Mark through the St. Louis metal scene and had replaced an original band member himself. He put in a word for Mark. This lead to an audition, a series of international touring and eventual relocation to the band’s home base in Baltimore in August 2005.

The band would play sometimes as many as 280 shows a year. Kloeppel estimates that his band has played in approximately 45 countries. Such popularity lead to a record contract with acclaimed independent label Season of Mist in 2010 after previously been on Nuclear Blast Records and Relapse Records.

But eventually more elements entered the ensemble. First, his now wife, Veronica, a high school classmate and fellow MU graduate, reconnected with him in 2008, which lead to their wedding in 2011 after she followed him to Baltimore. Shortly thereafter, the decision to move back to Columbia (where she works as a nurse at Women’s & Children’s Hospital after earning both an anthropology and nursing degree from MU) came when they discovered they were pregnant with their son, Avi. On a related note, Veronica is currently pursuing a doctorate degree in family practice nursing from MU’s Sinclair School of Nursing. The move and pregnancy made Mark realize that he had to come up with a different plan that didn’t involve excessive touring, thus leading to him stopping by the PRT office.

In the near future, Kloeppel will begin doing part-time work in January in band management for groups who are under the Extreme Management Group. After hopefully finishing his master’s thesis next spring, he would like to possibly pursue his doctorate degree in the department of sociology after being heavily influenced by a class focusing on narrative and identity taught by Jaber Gubrium. He plans on using the concepts of narrative and identity as the main premise of his upcoming master’s thesis, while still focusing on the stories of the same five metal producers. “Identity seems to be a good place to observe where contexts diverge,” he says.

In April, Mark and his band’s bass player and fellow vocalist, Jason Netherton, will giving talks at Grimposium, a traveling festival that combines an academic symposium with a concert. Netherton is currently finishing up his doctorate degree in media and communications studies at the University of Western Ontario, so Kloeppel has not had to go very far for empathetic support during their musical exploits on the road. They were asked to take part by Vivek Venkatesh, a professor at Concordia University in Montreal who is considered to be a pioneering metal music scholar.

Perhaps one day, Kloeppel and Netherton will be looked as two academic experts in the field of metal music. Right now they are college students chasing down degrees and bandmates looking to work on their next album, unfazed by the lack of academic papers produced about the lifeblood of their careers.

“That seems about right,” Kloeppel says. “Things need to be around for about 50 years before academia starts digging into it because there’s not enough to dig into, I guess, before that point.”