Students in the College of Agriculture, Food and Natural Resources raised $2001.08 for Tiger Pantry, a campus food pantry which provides food assistance to the MU community. The money was raised as part of CAFNR Week, a week-long celebration showcasing CAFNR’s staff, faculty, students and alumni. Throughout the week, directors worked to achieve philanthropic goals while hosting events and networking opportunities for students and alumni. 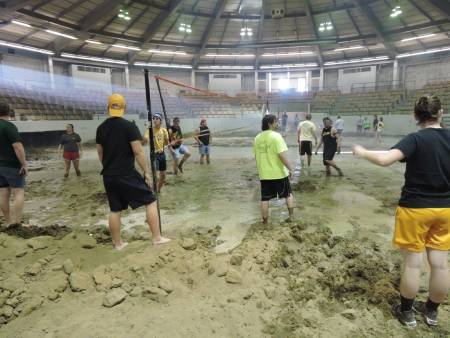 “Regardless of organization, regardless of your major, it brings everyone together,” Betty Thomas, one of this year’s CAFNR Week co-directors. “I think that’s really important.”

To kick off the celebration, students joined the Ag Alumni Association at the organization’s annual CAFNR Week Bonfire at Bradford Research Center. Students also competed in a mud volleyball tournament, and ate ice cream together at an ice cream social featuring CAFNR’s own Buck’s Ice Cream.

Elanco, an animal health company, partnered with students to host a penny drive on campus. Student organizations competed to see which could collect the most pennies. The change was donated to Tiger Pantry, alongside a $1,250 check from in the name of the winning organization.

“I have a tremendous amount of appreciation and respect for Elanco,” Thomas said. “We could not have done it without them.”

In sum, CAFNR Week raised $2001.08 for Tiger Pantry, as well as 250 cans contributed by the Beta chapter of Alpha Gamma Sigma and 20 turkeys donated by Cargill, Inc.

Tiger Pantry Director Grace Gabel said monetary donations will be used to purchase bulk orders of foods that aren’t regularly donated, including eggs and produce. Cans and turkeys will be given to members of the Mizzou community through Tiger Pantry’s food pick up program.

“As a whole, the donation allows us to talk about food insecurity on campus, take away the stigmatization and come together to change the perception of hunger on campus,” Gabel said. “CAFNR and its partners have always been extremely supportive of Tiger Pantry’s mission, and this will just further assist the Mizzou community.”