Of all the spots on the University of Missouri campus, the favorite of Lizzie Obeng is a bench in front of the Agriculture Building on the corner of Hitt and Rollins streets. The perch provides a great place to people watch regardless of the weather. On warm summer days  — perhaps between sips of a strawberry smoothie from Infusion coffee shop at the MU Student Center across the street — she finds herself drifting off and envisioning her family and friends in her home country of Ghana, a West African nation that sits more than 6,000 miles southeast of Columbia.

“Mostly I come to sit here and look at the students going up and down,” Obeng says. “And mostly also because of the weather being similar to Ghana, I just miss home also… More or less, I try to just picture what’s going on.”

That picture includes her husband, Rexford, whom works in the banking industry in Kumasi, the second largest city in Ghana. “It’s not been easy, with me being a distance apart,” she says, “but we are looking at the brighter side of the opportunity and so we are managing.”

The opportunity that she speaks of is one that has been close to three decades in the making after first starting as a seed in the late ’80s. Obeng is the first recipient of the Freeda Yeo Endowment, which is funding approximately two of the three years of her doctoral degree in natural resources conservation in the forestry department of the School of Natural Resources under the advisement of Francisco Aguilar, associate professor of forestry. After completing her Ph.D., Obeng plans to return to Ghana to help serve as an invaluable resource as her country — just as Ms. Yeo envisioned.

The first time around

Obeng first was introduced to MU through the U.S. Department of Agriculture’s Borlaug Fellowship Program. She arrived in Columbia in October 2012 for a three-month stay, with Aguilar assigned as her mentor, in large part to study the ecosystems and agroecology of cocoa agroforestry systems. 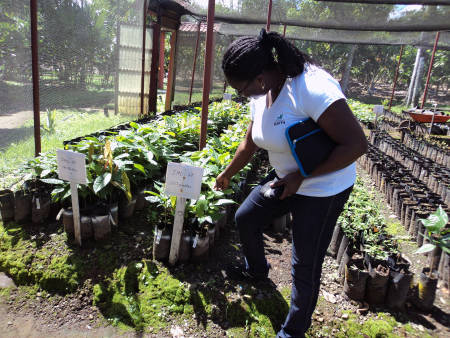 Given that Missouri lacks cocoa plants, Aguilar relied on his connections in Central America to arrange for Obeng to study for two weeks at his alma mater of EARTH University. “I did not know that was part of the plan,” Obeng says.

When she arrived in Costa Rica, she was pleasantly surprised how much the country resembled Ghana. It is a land that shares nearly the same latitude (nestled just north of the equator), the same trees, the same farming systems and close to the same food. She remembers walking into a restaurant and being served a dish meat and bean stew with fried plantains that is known as “red red” in Ghana. “I did not really expect to find almost the same conditions as in Ghana,” Obeng says.

Using her trip as fuel, Obeng went on to write an academic paper with Aguilar about her findings that ran in the Agroforestry Systems journal in September 2014, which was recently featured in an article about shade-grown cacao in The Washington Post.  When she gave a PowerPoint presentation about all she learned during the Borlaug program to the members of CAFNR International Programs, her final slide mentioned that she hoped to one day come back to MU as a doctorate student.

“When I came to Mizzou and I worked with Francisco I really found this place very nice, and I felt like it would be a good opportunity to come back for a Ph.D.,” says Obeng, who felt comfortable studying in America given that English is the official language of Ghana. She was impressed with how many students from Africa she encountered on campus, particularly those from Ghana. “I really liked the atmosphere.”

‘She was a very gentle woman’

The exact day is not known, but Ken Schneeberger remembers the first time he talked to Freeda Yeo. She was a farm owner from Milan, Missouri, a town of less than 2,000 people about 30 miles south of the Iowa border. She also was battling cancer, which caused her to visit University Hospital on several occasions, including the first time they met. “She was a very gentle woman,” Schneeberger says. 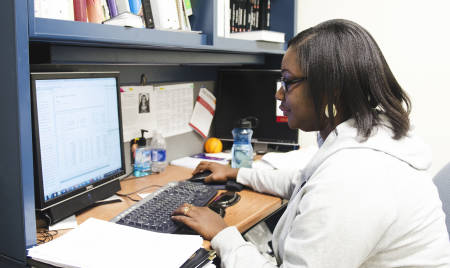 Lizzie Obeng is working on her doctorate degree in nature resources conservation in large part to the Freeda Yeo Endowment.

Given that she was a widow with no children, Yeo was interested in giving the farm to the College of Agriculture, Food and Natural Resources to set up an endowment or other gift option for a very specific recipient: “I really want to help somebody or multiple people who are from Africa who want to go back and help people in Africa, particularly farmers,” Schneeberger recalls her saying.

Still her heart was in agriculture, and having attended MU in the early 1930s, she wanted to leave her legacy in Columbia. “She said, ‘It was just a real pleasure to see these young people coming from other parts of the world and getting an education,’” Schneeberger says.

After meeting with Yeo several times, Schneeberger oversaw all of the legalities that came with the College acquiring the farm and surrounding land following her death just a few years after their first meeting. The acquisition was made during the much-publicized farm crisis, so the property was rented by a tenant before eventually being sold in the late ’80s. The money from the resulting sale was then tucked away, waiting its turn to grant Yeo’s request, which was to help a student or multiple students who are from Africa to return to help people in Africa, particularly those involved in farming.

Schneeberger says that to have such an elongated period of time between the formation and the actual awarding of an endowment represents a very uncommon set of circumstances.

“It is unusual, but there were these constraints in terms of who qualifies for the scholarship or the fellowship that might be given as a result of the conditions that were established for the donor and we are committed when we make our pledge to a donor to carry it out to the best of our ability, so that’s what we tried to do,” he says.

“Here is a Borlaug fellow and so we got to know Lizzie then and saw that she was very bright, very dedicated, committed to making a difference and thus when she applied for the graduate work she seemed to fit those attributes that we were looking for in a person to be funded.”

Lizzie Obeng hails from Nkwatia Kwahu, a town in the eastern region of Ghana that is too small for most maps. Her late father served as a sub-chief to his home town while also spending time as a business entrepreneur in the capital city of Accra. The home town’s surrounding natural resources, with its lush forests to the east of Lake Volta and the surrounding industries of corn/maize, cassava, cocoa and plantain production would go on to serve as significant influences in her career path.

Obeng earned her first college degree in agricultural economics in 2003 from the Kwame Nkrumah University of Science and Technology in Kumasi, before being assigned to the Forestry Research Institute of Ghana (FORIG), also in Kumasi. The assignment at FORIG was part of her year of national youth service (a requirement for any Ghanaian after finishing a four-year degree). She had no control over where she was placed. “I say I was lucky,” she says about realizing her passion for agroforestry. After several stops and six years later, she would go on to become a research scientist at FORIG in 2009 before taking part in the Borlaug program. 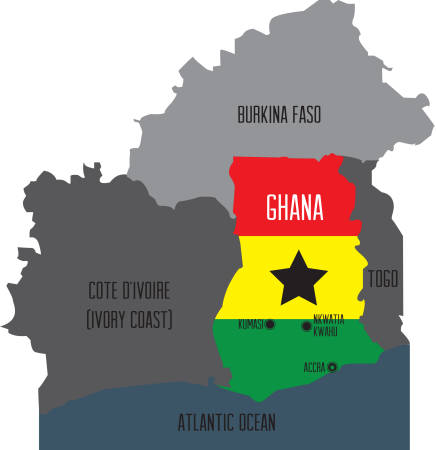 Currently, Obeng is preparing to embark on work under the broad framework of ecosystem valuation in the spring semester of 2016 that will become her doctoral dissertation: Conducting a series of surveys to U.S. citizens to see if they would be willing to pay not only for ecosystem services in their country, but perhaps other services in other countries as well, such as the preservation of threatened wildlife species in South Africa or trees in Ghana.

It’s a dialogue that needs to happen, Obeng says. Several countries, including Costa Rica, have already implemented ecosystem payment programs. Through these programs, countries have been able to increase their forest cover and enhance biodiversity through the creation of financial incentives for land owners to protect forests in return for the benefits they provide. These benefits include c0nserving wild species, regulating river flows and storing carbon. What she envisions would be more comprehensive than the current Conservation Reserve Program (CRP) run by the USDA, in which a yearly rental payment is paid to farmers in exchange for “removing environmentally sensitive land from agricultural production and planting species that will improve environmental quality” (in the words of the USDA web site). This theoretical program would use the CRP as a model but would be extended into other countries.

“At some point just as we would want to enjoy intangible services provided by the forest, it will get to a point where we might not be restricted to a specific governmental funds to really manage these services,” she says, “but I would believe that definitely there will be a point where almost everybody will be brought on board to contribute to the management of forests to continuously supply intangible services such as maintenance of a favorable climate and clean air.”

In December 2011, Ghana joined a delegation of developing countries taking part in the UN-REDD Program (Reducing Emissions from Deforestation and Forest Degradation) that is run by the United Nations. Obeng says that the country is moving into the second phase of the program, which will focus on implementing the Cocoa Forest REDD+ Program and associated activities, where farmers can be compensated to keep on trees on their farms so that greenhouse gases can be lessened. For years, the country has been dealing with many illegal logging issues and other deforestation issues that have dramatically caused her home land to lose a significant amount of its forest cover.

When she finishes her degree and returns to FORIG, she will look to conduct more research — and possibly teach — on ways and policies of human dimensions and natural resource conservation. “Given her profile, given her personality, I expect her down the road to take a stronger leadership role in Ghana,” Aguilar says. “Here is a very bright, young, dedicated and hard-working female with excellent leadership skills. She will get far.”

Her future success may ultimately be determined on how well she can bridge practical applications between the realms of agriculture and forestry with the conceptual design of landscapes for the provision of ecosystems that extend beyond farm commodities — and in turn, galvanize the Ghanaian way of thinking when it comes to land management and conservation issues.

“There has to be that synergy where we should be able to encourage farmers to kind of integrate trees and farms to create that atmosphere,” Obeng says, “that will not allow them to move onto new fields every now and then and clearing more forest.”