It’s fair to say that Peter Sutovsky is a man of varied tastes. He knows his way around bovine sperm cells and Cabernet Sauvignon. At the University of Missouri, Sutovsky does double duty as a professor and award-winning researcher of reproductive physiology in the Division of Animal Sciences in the College of Agriculture, Food and Natural Resources and a professor of obstetrics, gynecology and women’s health in the School of Medicine. Yet, he still finds time outside of the lab to be a self-identified “wine guy.”

Sutovsky grew up in Western Slovakia in Central Europe. He hails from the edge of prime wine country, at the northern border of a patch of a cool climate viticulture covering parts of Slovakia, Hungary, Austria and the Czech Republic. It’s an area famous for its white wines, specifically its Riesling and Grüner Veltliner.

After a post-doctoral fellowship at the University of Wisconsin, Sutovsky and his wife, Miriam, relocated to Portland, Oregon. The couple lived in the Willamette Valley, a designated American Viticulture Area. 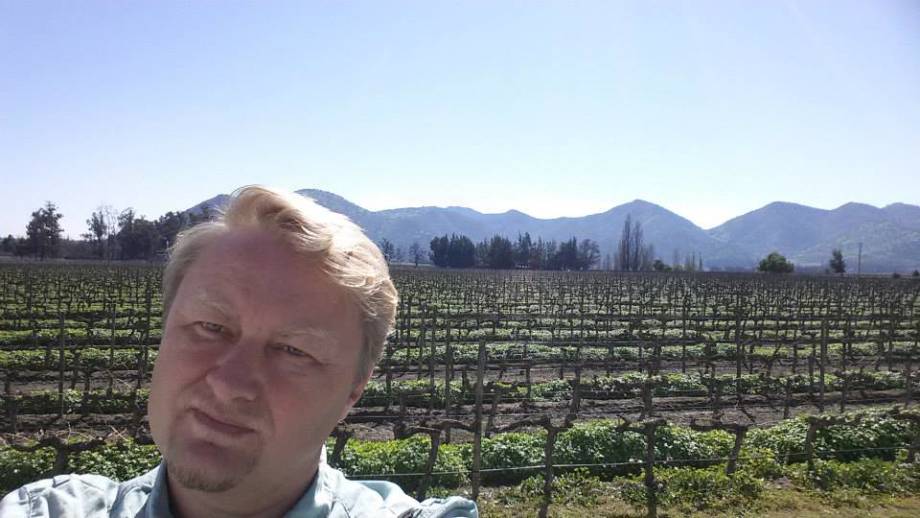 Peter Sutovsky, a professor of animal sciences, snaps a photo of himself at Viña Santa Rita vineyard in Chile. Photo courtesy of Sutovsky.

“It’s essentially the Burgundy of America. Some of the best Pinot Noir in the world comes from exactly that area, so I literally had it in my backyard,” Sutovsky says. “That culture obviously cares about wine a lot.”

Wine was everywhere. Sutovsky sampled Pinot Noir while grocery shopping. He read about it. On television, people talked about how the grapes would fare impending weather. He and his wife became more interested in wine as they attended more tastings and began to read about it. The pair didn’t start collecting wine, though, until they moved to Missouri.

“Wine buying is a disease,” Sutovsky says. “The saying is that ‘Wine drinking in small doses is good for your health, but wine buying is an incurable disease.’”

Around 2008, Sutovsky reconnected with an old friend who had become an owner and publisher of agricultural magazines in Slovakia. They went to wine tastings together, and Sutovsky suggested starting a wine magazine.  “He told me that he was already thinking about that.”

Thus, Vinotéka was formed. In 2010, Sutovsky wrote an article for the first issue. He contributed many more articles to the magazine here and there, before he was asked to become a columnist. Today, he writes a column called “Wine Gossip from America” for the bi-monthly publication. He covers a variety of “gossips” from the States, as varied as the etiquette of bringing wine to a swimming pool and the overturning of a truck carrying 1,000 cases of champagne.

Sutovsky sees wine very similarly to entomology. “Wine is like a caterpillar turning into a beautiful butterfly,” he says. 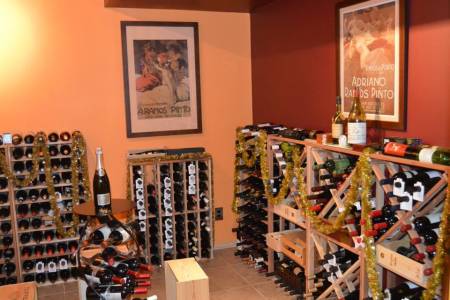 Sutovsky stores many bottles of wine in a humidity- and temperature-controlled cellar in the basement of his home. Photo courtesy of Sutovsky.

When it is stored in the right conditions, for example, a wine rack in Sutovsky’s humidity- and temperature-controlled cellar, chemical reactions between tannins in the grapes and the oxygen slipping through the cork change the wine’s flavor and make it more aromatic.

This is the wine’s chrysalis stage. When it becomes a butterfly, it has reached its peak and will decline if it continues to age. There is only one way to find out when a bottle is a butterfly. You have to drink it.

Sutovsky buys his favorite wines by the case. Each year, to track its progress, one bottle is opened. With each opened bottle, Sutovsky analyzes his wine. To realize when the wine has peaked, he has to remember exactly what the wine tasted like before. Once it is perfect, he finishes the case, paired with his wife’s cooking and sharing with family and friends.

“It’s such a wonderful luxury to have to basically just walk down to your basement to the wine cellar and pick bottle that’s six, seven years old and probably just at its peak and have that wine,” Sutovsky says. Most people buy wine for immediate consumption, so the wine found on the shelves of liquor and grocery stores is usually intended to be drank soon after purchase. “Unless you go to specialty shops, you don’t get those older vintages of those wines,” he says.

For novice wine lovers, Sutovsky has a few recommendations. He suggests finding a good wine shop with knowledgeable personnel who are willing to speak to you and educate you without being snobby about it. It may take some time to find the right people in the right spot. Finally, he says you should have a good time.

“Just enjoy. That’s my advice. Have a good time. Drink in moderation, so you can actually remember what you had the night before,” Sutovsky says. “If you can travel to wine country, do it, because it’s always amazing.”