A group of University of Missouri students took home the gold at the 94th Collegiate Dairy Products Evaluation Contest held in September in the Chicago area. The team won first place overall in the milk division of the competition. 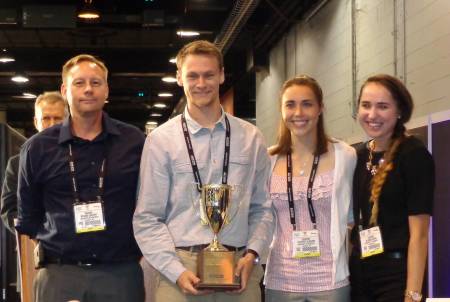 Teams from universities across the nation competed in the regional and national competition, both held in the Chicago area. The team practiced daily for weeks before the competition to learn exactly how to detect attributes in six different products: milk, cheddar cheese, ice cream, cottage cheese, strawberry yogurt, butter and vanilla ice cream. They learned how to detect fermentation in cheddar cheese or the flavor of garlic and onions in milk. The students built a memory bank of different textures, tastes, smells and sights for product comparisons.

Participants observe, smell and taste each product. Then, they score samples of each product against the ideal. A winning score comes the closest to matching the scores of the experts who serve as judges.

“Just to get to know dairy products so closely, and have such a good understanding of them at the end of the day from a producer’s perspective, from a scientific and sensory perspective was great,” Datta said. “I got to know so much about dairy products. I’ve been lactose intolerant all of my life, so it’s not that I have consumed a lot of dairy.” Competitors don’t consume the products. They taste each product before spitting them out. Most people wouldn’t want to eat that much dairy in so few hours anyway, Datta pointed out.

Linhardt said team members were selected based on their interest in the competition. He also recruits students from the dairy product evaluation course he teaches in College of Agriculture, Food and Natural Resources’ food science department.

“I knew it would be a great experience because a lot of my friends have had the opportunity to go and compete… This is a great résumé builder if you are going into anything related to dairy products,” Berge said.

Linhardt has been involved with the dairy product evaluation team since 2001. He received the position as coach after the retirement of Robert Marshall, a food science professor emeritus and one of the researchers who pioneered MU’s signature Tiger Stripe ice cream. Both are current superintendents of the Missouri FFA Dairy Foods Career Development Events, which includes the state FFA dairy product evaluation competition.““The dairy product evaluation is a great experience. Students should really pursue the opportunity to be a part of that because it opens up so many doors in the dairy industry.””
―Courtney Kleekamp

“It gives them a sense of camaraderie within the food science department,” Linhardt said of the team. “Once you’re in it, it’s for life.”

The evaluations team can bring job opportunities for participants. Linhardt said several former team members now hold jobs in the industry. Berge even ran into an MU alumni who judged the competition. Students often have the opportunity to speak to the dairy professionals who judge the competition once judging has ended. Kleekamp received two job interviews through her participation at the national contest and the dairy evaluation team.

She landed a position as a bake lab technologist at AB Mauri in St. Louis. This is only one page of a new chapter in Kleekamp’s life, as fellow dairy evaluation team member Adam Berge recently proposed to her during MU’s 104th Homecoming celebration. The date also fell on the couple’s fourth anniversary.

After she graduates in December and begins her new position, Kleekamp said her experience on the team will help as she evaluates the sensory aspects of new recipes and ingredients for baked goods.

“The dairy product evaluation is a great experience,” Kleekamp said. “Students should really pursue the opportunity to be a part of that because it opens up so many doors in the dairy industry.”