Food safety programs and mentorship may be the antidote for foreign food poisoning. 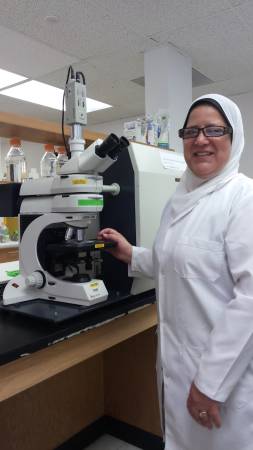 The University of Missouri and the USDA have joined forces to educate foreign scholars about food safety. Azlin Mustapha, professor of food science, is a research mentor with the College of Agriculture, Food and Natural Resources’ International Programs. Over the past two years she has mentored five scholars from Egypt who came to MU as part of the USDA Scientific Exchange Scholars Program to receive training on food safety.

“Her previous work helped me so much in my training on detection of food pathogen by PCR especially differentiation between live and dead pathogens,” said Asmaa Fayed, an Egyptian scholar who participated in SESP in 2014.

Mustapha was born in Malaysia and came to the U.S. in 1981 to pursue her college education at Doane College in Nebraska. She came to MU in 1996 after earning her Ph.D. from the University of Nebraska-Lincoln in 1993.

Along with her reputation as an accomplished professor who has been with Mizzou for nearly 20 years, Mustapha’s innovative research in food microbiology, rapid and novel molecular and analytical detection methods for food borne pathogens, and investigations of the application and safety of novel antimicrobial agents, make her the prime candidate to mentor fellows from around the world.

At a recent meeting in Cairo, the scholars collectively gave high praise to their experience working alongside Mustapha.

“Azlin Mustapha, from my opinion, is the best mentor I have ever had,” said Jehan Ouf, a member of the 2014 SESP. “She is scientifically strong, flexible, good organizer and hard worker. She helped me a lot to achieve my goal through providing me with scientific knowledge and all facilities.”

As researchers at the Animal Health Research Institute in Egypt, the scholars focused primarily on food processing and safety. Ouf and Fayed applied to the SESP to enhance their ability to promote food security and safeguard against biohazards in Egypt.

Mustapha organized individual training programs for each of the scholars to coordinate with their specific research goals. Her graduate students assisted the fellows in specific lab-training procedures.

That training allowed Mustapha to then present the fellows with a small-scale project using the tools available to them in the lab. This allowed the fellows to receive hands-on experience that was supplemented by attending courses taught by Mustapha. 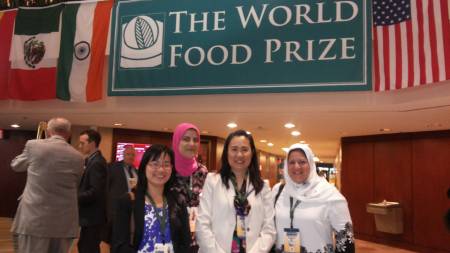 “First and foremost, I wanted them to get the training they needed to be able to independently apply the skills in their specific positions in Egypt,” Mustapha said. “I also wanted them to see first-hand how things work or are conducted here, including the way our courses are taught, the way the research labs are run and the way the food industry and regulatory agencies work.”

This hands-on technique proved to be most effective in the eyes of the fellows Ouf and Fayed.

“She gave me a lot of experience in this field. The entire program was very useful for my work and improved my lab skills,” Fayed said.

Ouf and Fayed also got a taste of Missouri culture during their stay at MU, including visits to Lake of the Ozarks, the Clark Produce Auction and local attractions around Columbia. Both fellows had the opportunity to attend the Missouri Environmental Health Association’s annual meeting in Lake of the Ozarks during their stay. Representatives from the Centers for Disease Control and Prevention and the Food and Drug Administration presented an introduction to U.S. food safety standards. Dr. Mustapha believes that cultural and traditional experiences are just as important to international fellows as academic ones.

“My first responsibility was to provide each of them with a high quality and meaningful experience here that they could apply to their careers in Egypt,” Mustapha said.

According to Ouf and Fayed, Mustapha has successfully delivered a program that has enriched their personal and professional careers, and, equally important, the scholars have built lasting connections with the University of Missouri.

Mustapha will travel to Egypt for a mentor follow-up with Ouf and Fayed in January 2016. She will visit the Institute and discuss how the scholars’ research has continued since leaving MU. The trip will further reinforce the collaboration between MU and the Animal Health Research Institute.