On a sunny Monday morning in Room 217 of Mumford Hall, Zlatina Baleva reached for a cup a coffee and looked around at the empty chairs. “I’m surprised I’m one of the first people here,” she said. “I’m not a morning person.” 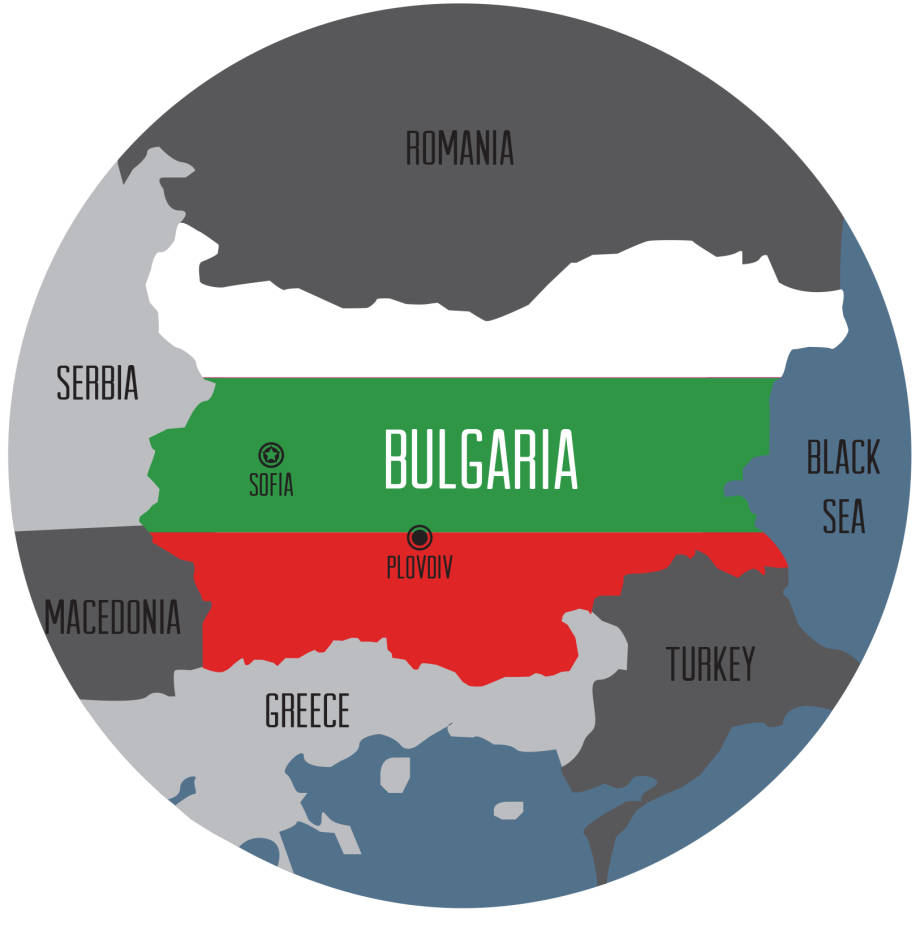 Baleva and the rest of the delegation from the Agricultural University of Plovdiv (AUP) were at the midway point of a two-week study visit to Missouri as students of a master’s degree program geared toward agribusiness and entrepreneurship.

With the hospitality and planning of Willi Meyers and Ken Schneeberger with CAFNR International Programs (CIP) and Michael Sykuta, associate professor of Agricultural and Applied Economics in the Division of Applied Social Sciences, the group spent time both talking with CAFNR faculty on the MU campus as well as visiting key players in the local agribusiness scene in the mid-Missouri, Kansas City and St. Louis areas — to help drum up inspiration for ways to improve business conditions in their homeland.

In doing so, they renewed a partnership between the two universities that extends back to the fall of the Communist Eastern Bloc in Europe in 1989, back when the 27-year-old Baleva and a majority of her other nine classmates were toddlers.

“They were kids during the transition,” Sykuta said. “They don’t have any memories of what the Soviet allocation models were, but then they’ve kind of lived through this transition and the uncomfortableness of what markets are and how they work, and to see what that looks like and to see them react to it was really cool for me.”

The Bulgaria they know is one where opportunity grows as thick as the grape vines in one of the world’s oldest winemaking countries. The students represented both private and public sectors of the nation’s agricultural industry. 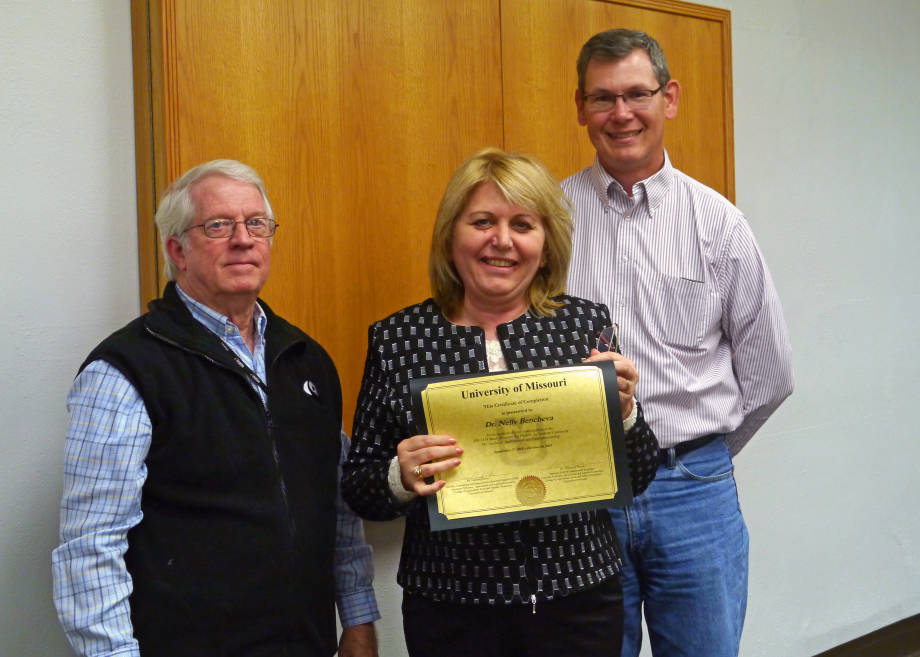 Nelly Bencheva, the vice rector at AUP who co-organized the visit, said that Bulgaria as a whole has great technical training when it comes to agronomy and scientific areas of expertise, but needed more exposure to the inner workings of everyday business practices. “We see that we have to provide the knowledge and experience in the area in entrepreneurship,” she said. “We have knowledge of all kinds of technology and improvements, but the lack of knowledge is in the business area.”

“As far as the production is concerned, we are on the same level, but as far as marketing techniques, the States are far more sophisticated,” noted Baleva, who works as an organization secretary for the Bulgarian Association of Agricultural Producers.

At that point, one of the stops that had made the biggest impression on Baleva and her fellow students was a visit to the Jowler Creek Vineyard and Winery in Platte City, Missouri, 30 miles north of Kansas City. They were fascinated by how the venue is able to maintain a six-acre sustainable vineyard through such tactics as using sheep to control weeds and chickens to mitigate the effects of insects.

“That is something that we can do in Bulgaria, to involve the animals to be close to the people. If I want to start my own business, that will be a very good idea,” said Albena Dimitrova, a student who currently works as a business assistant at Vinprom Peshtera, her country’s largest producer of both wine and other alcoholic beverages.

Another discovery that could be applied to the Bulgarian commerce system is the idea of a farmers’ market, like the one they went to in Columbia, where producers directly sell their goods to consumers with no third-party vendors involved (as is usually the custom). “Bulgaria is a small country but I think this is the future for Bulgaria: small business in a rural area,” said Vladislav Tsvetanov, a student who works for the Ministry of Agriculture in his home country. “This is important link between customers and farmers.”

One of the biggest takeaways from the delegation was an affirmation of some of their current agribusiness practices, such as viticulture and winemaking.

“What we saw and learned during these two weeks will be extremely useful for us and not just due to the good examples that can be used in Bulgaria,” Bencheva said, “but because we realized that there are certain areas in which we are doing quite well and have good traditions on which we can count on.”

A chain of connections

“I think the fact that it had existed made it possible to do what we’re doing,” Meyers, the director of CIP, said of the relationship between the two schools before the study visit.

The exact formation of the 5,550-plus-mile pipeline between Columbia and Plovdiv is not clear cut, but the bond can be traced back to Bob Goodman, a longtime plant pathologist at MU whose research on grapes netted him contacts in Bulgaria, including AUP plant pathologist B.K. Nakov, right around the fall of the Soviet Union in 1989 before Goodman’s passing in 1999.

Goodman learned about a program being offered by the U.S. Department of State that would give funding to U.S. universities to help train the agriculture leaders of the Eastern Bloc about agricultural economics and land management in the western world. Goodman relayed the information to Phil Warnken, a professor emeritus of agriculture economics at MU, who submitted the successful proposal as the principal investigator. 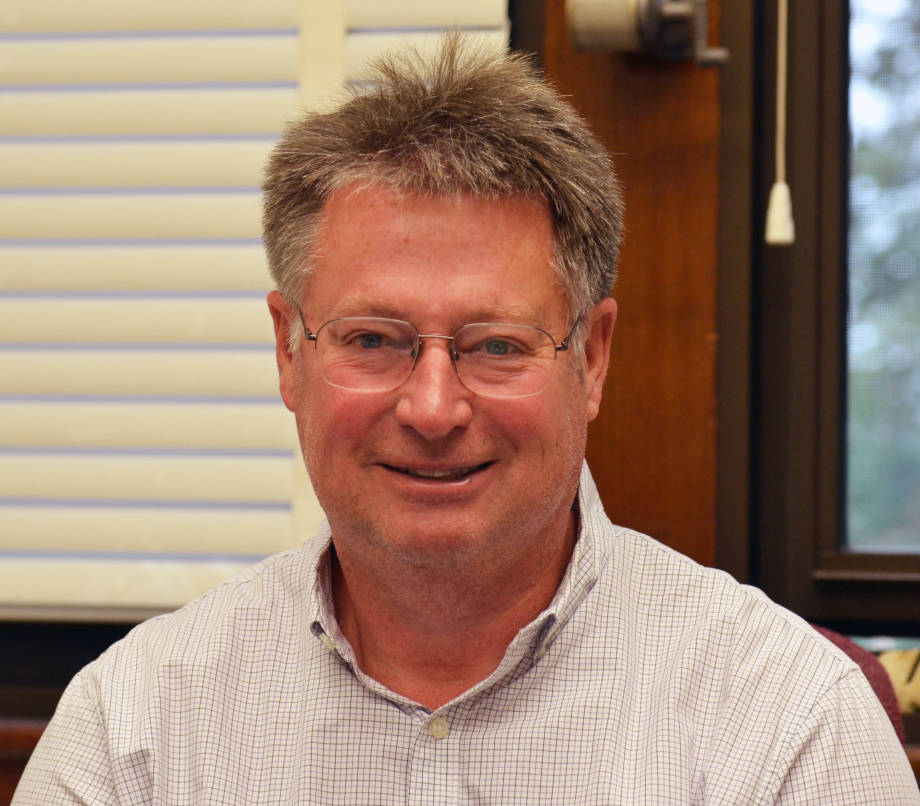 As part of the arrangement, in 1993 a delegation from Plovdiv came to MU, which included Bencheva, an assistant professor at the time who helped serve as a translator. That same year, Hrabrin Bachev, a professor from the Institute of Agricultural Economics from Bulgaria’s capital city of Sofia, arrived at MU as a Fulbright visiting professor.

Quickly thereafter a delegation from MU arrived in Bulgaria to teach a class on the basic principles of business management. That group included Michael Monson, an associate professor in Agricultural and Applied Economics. Monson’s favorite anecdote of the disarray takes him back to a farmhouse where tomatoes were being grown out of the cracks of a sidewalk, instead of the untilled fields that surrounded them, as the country was confronted with the concept of privatization. “In our initial visit they were still trying to figure out who owned what assets. Anything they planted in the field that time, nobody really knew who it belonged to,” he said.

“It’s like one guy in Ukraine told me: ‘What if you woke up one day and the entire government of your country and everything was just gone?’ I mean you’re like starting from scratch,” Meyers said.

Or as Warnken said to a group of Bulgarian colleagues during a lunch:

“‘Under my wildest dreams, I could never conceive something like that happening in the United States, in my country.’ And their response was ‘we didn’t expect it either.’ It was their wildest dreams.”

In 2003, Sykuta received a phone call from Bachev, asking him to co-teach a summer course on agrarian institutional analysis that he was putting together at Central European University in Budapest, Hungary. When Sykuta arrived, he was introduced to one of Bashev’s doctoral students, Bozhidar Ivanov, who had heard positive comments about MU through his mentor. 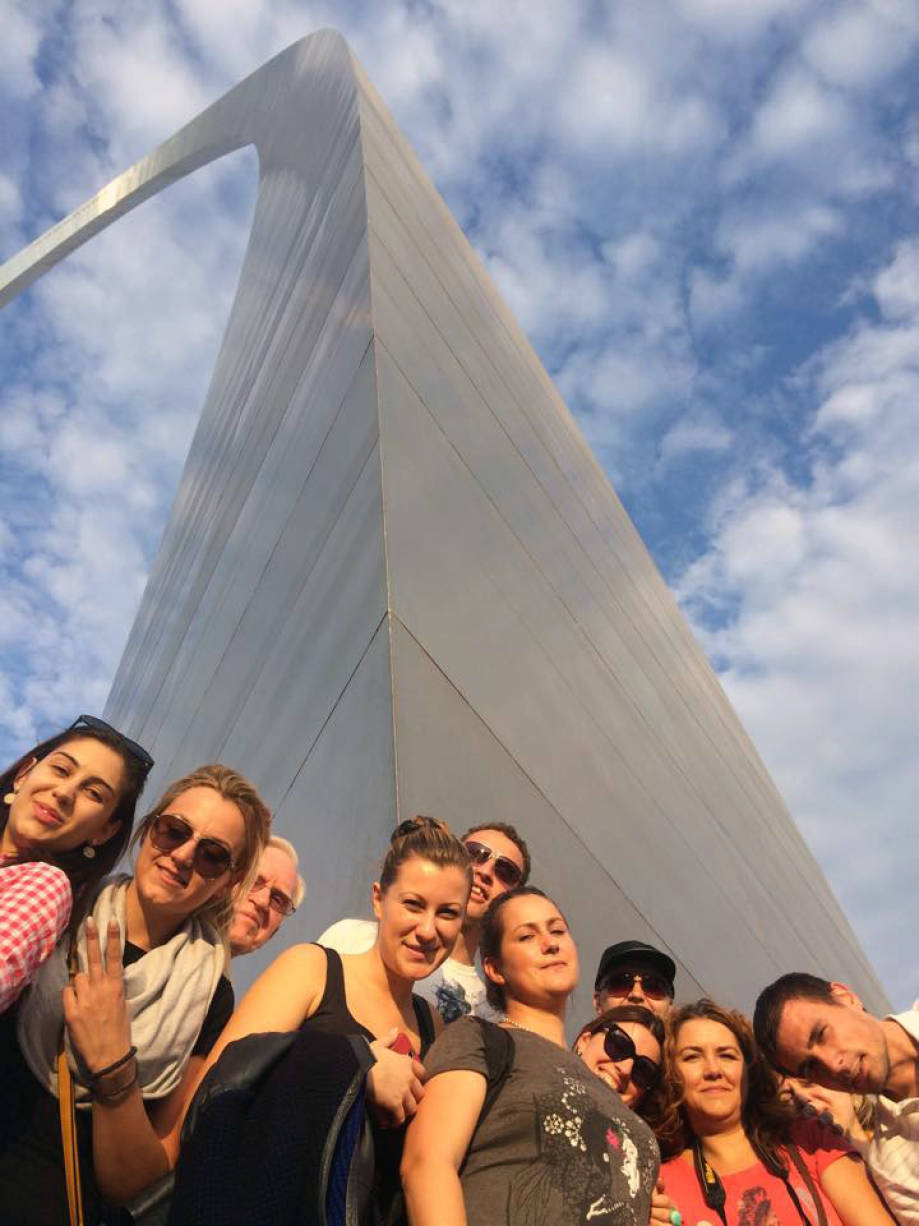 Fast forward three years. Bencheva first met Meyers at an agronomy conference in Long Beach, California, in 2006. When she bumped into him at a conference in Poland five years later, she was with the AUP rector, Dimitar Grekov, who would go onto become Bulgaria’s agriculture minister. The three of them started talking about the idea of re-establishing an alliance between the two schools. As fate would have it, in the spring of 2012 Ivanov is awarded a Borlaug Fellowship and comes to MU, where he is mentored by Meyers in the hopes of starting the Bulgarian equivalent of the Food and Agricultural Policy Research Institute.

“That was my dream, my goal… to come here and to learn how to do this and adopt this and bring it home to Bulgaria,” said Ivanov, who helped chaperone the students on the recent trip.

What followed was a series of visits between both delegations. In 2013 (the same year that Ivanov’s dream, the Center for Agricultural Policy Analysis, a.k.a. CAPA, opened), Bencheva and Grekov visited Columbia and presented the groundwork of the agribusiness study visit under the financial support of the America for Bulgaria Foundation.

Last November, Sykuta and Meyers returned to Plovdiv, the country’s second largest city located on a fertile plain south of the Balkan Mountain range, to attend the launch of the graduate program by AUP officials. Sykuta stayed to co-teach a course with Dimitar Terziev from the New Bulgarian University. In May of this year, Sykuta went back to co-teach a course in management strategy with Bachev, thus completing a circle of collaboration.

Meyers, who now regularly keeps in contact with Ivanov and his team, recently returned from Bulgaria after giving a presentation on the global market situation based on projections from FAPRI at CAPA’s annual outlook conference. Following some rough financial times in the late ’90s, Ivanov said that the country has been enjoying a gradual stable turnaround ever since it joined the European Union in 2007. “Now we are on the right way,” he said.

The hope for Meyers and the rest of those faculty and staff at MU involved in the partnership is to see a group of CAFNR students spend a few weeks in Bulgaria, a place that features many of the agricultural features as Missouri. Sykuta said that he recently read that Bulgaria’s Black Sea Coast had become the most popular holiday destination for British travelers due to both its beauty and cheaper costs than its counterparts in France and Spain.