Did you miss the first airing of the sixth installment of our new Insight series? LISTEN NOW to the program or to the extended version of the interview.

The monarch butterfly population has seen a steady decline during the past two decades.

There are many factors beyond our control, including climate, which negatively impact the monarch population. One way to help, though, is by supporting and planting habitat specific to the monarch.

Monarchs fly up to 3,000 miles during their two-way migration. To fly that distance, monarchs need waystations – which are resting plots full of sources of nectar and host plants.

“Monarch waystations are places that provide resources necessary for monarchs to produce successive generations and sustain their migrations,” said Chip Taylor, University of Kansas professor of entomology. “Without milkweeds throughout their spring and summer breeding areas in North America, monarchs would not be able to produce the successive generations that culminate in the migration each fall. Similarly, without nectar from flowers these fall migratory monarch butterflies would be unable to make their long journey to overwintering grounds in Mexico.

“The need for host plants for larvae and energy sources for adults applies to all monarch and butterfly populations around the world.”

Along with being a professor of entomology, Taylor runs monarchwatch.org. The website is devoted to informing the public about the plight of the monarch. Taylor’s work has had an impact on the University of Missouri College of Agriculture, Food and Natural Resources.

Thirteen Agriculture Research Centers across the state will plant monarch waystations, giving monarchs migrating through Missouri a chance to rest and recover.

The Research Centers will plant a total of 22 acres of monarch habitat.

“It’s really about us doing our part,” said Dusty Walter, Agricultural Experiment Station director of natural resources. “We’re taking land that we’re probably just mowing and using it to provide habitat that the caterpillars can develop on. Additionally, the plants used in the mix will provide flowers and nectar throughout the migratory season.”

The idea to create monarch waystations at Agricultural Research Centers across the state started with a presentation by Taylor. He presented at the University of Missouri on what individuals can do to help revive the monarch population. 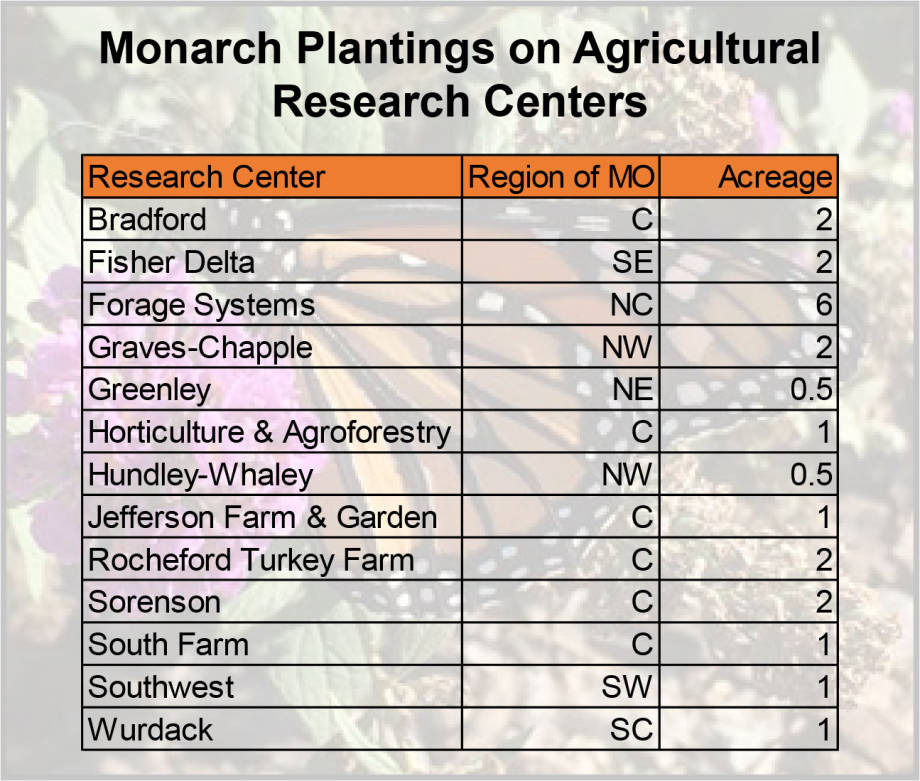 “The presentation really opened our eyes,” Walter said. “We started looking at what more we could do.”

The 13 Research Centers will plant monarch waystations starting this winter. The milkweed is already ordered and Walter said they would do naturalized seeding. He said they will let the snow and cold temperatures work the seed into the soil. In the spring, they will spray sites to control grass. There will be post-seeding management if needed as well.

“There are always areas of the farm that are not utilized,” Walter said. “If there are ways to use those areas to support the balance in nature, we need to develop them.

“We’re still learning. It’s so easy to lose a population like this. We’re looking at those underutilized areas on the farm and how those can balance and sustain some of the more sensitive elements in our world.”

Walter added that the plots are for demonstration right now. There is no current research tied to the project, although future research is a definite possibility.

“We just want to support the monarch population at this point,” Walter said. “Our goal right now is to demonstrate. Hopefully we will see the population grow.

“We’re doing what we can. Oftentimes, observation is the beginning of scientific endeavor. What we see in these demonstration plots may help bring to light some questions that researchers can look at. The combination of population support and future research endeavors should place us in a better position to target efforts that mean we’ll enjoy monarch migrations for generations to come.”

Monarch butterflies and their importance

Monarchs by themselves are not great pollinators. However, they do share a habitat with other good pollinators. By creating a safe habitat for the monarch butterfly, other pollinators will benefit. 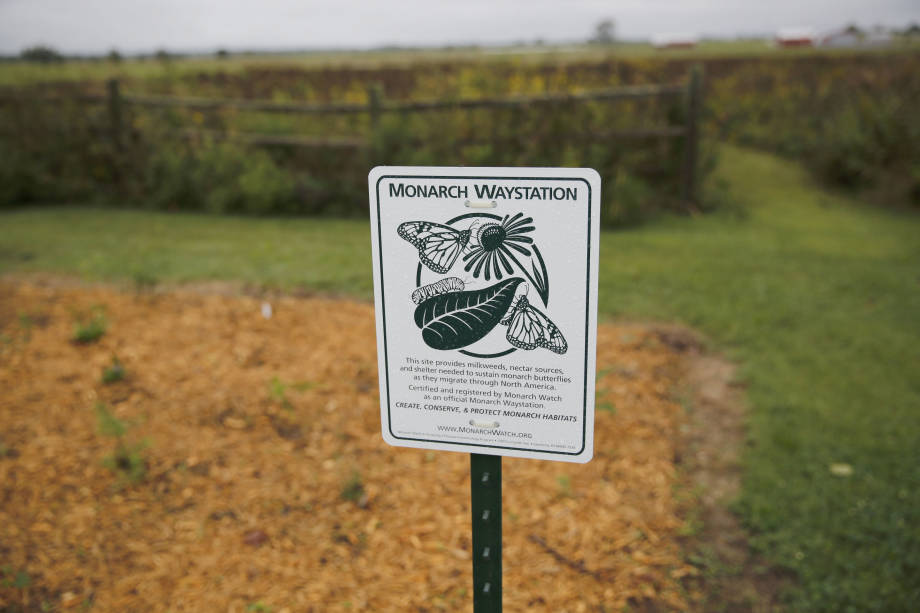 Bruce Barrett, professor of entomology at MU, added that the monarch is one of the more recognizable insects.

“The monarch butterfly is an iconic insect,” he said. “It’s a symbol of the conservation movement. It adds an aesthetic beauty to our world.

“We should be concerned about its decline. It brings to people’s attention the plight of the environment, and as such, is a reminder that individuals need to be good stewards of the land. It’s symbolic of what nature can be like and should be like.”

Barrett is also part of the CAFNR Monarch Working Group. Along with being a very well-recognized insect, Barrett said the monarch is unique in regards to its migration. While the distance covered is incredible, the monarch’s realization of needing to migrate is unusual.

The generation of monarch that travels to Mexico has never made the trip before. It’s an instinctive action. That generation also tends to live the longest.

“The first two generations, and maybe parts of the third, generally have shorter life cycles,” Barrett said. “It’s really not a long life span. The generation that overwinters (in Mexico) may live for several months.”

As that last group heads north for the spring, they look for milkweed to begin a new generation of monarchs.

The monarch migratory corridor runs through Missouri and while there are other factors as to why the monarch population has seen a decrease, habitat loss continues to be an issue individuals can change. Milkweed is the food source of choice for monarch larvae. The plant has seen a decline, too, due to the constant fight against weeds in our agricultural fields.

That’s why planting milkweed along the corridor is extremely important. 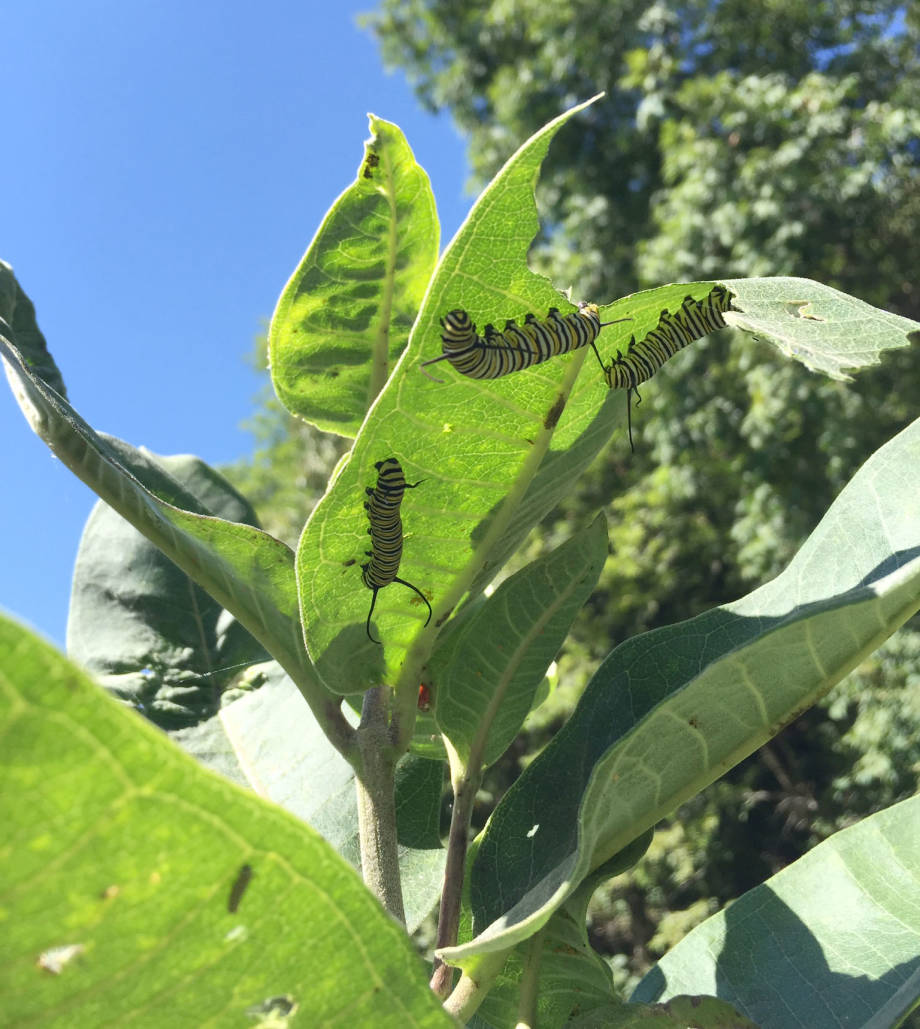 Milkweed is the food source of choice for monarch larvae. Photo courtesy of Dusty Walter.

While the Agricultural Research Centers are planting monarch waystations in a larger capacity, individuals can do their part, too. Anyone can plant milkweed and nectar sources in their backyard.

“The more area that is designated for butterflies, the more likely they are to continue their migration,” said Amanda Marney, Agricultural Experiment Station program director. “Anyone can plant a waystation. This is a great project that a family can do together.”

Marney is located at the Southwest Research Center in Mt. Vernon, Mo. That Center has been developing a monarch waystation since July and will plant an acre of milkweed at their site.

As far as waystation seed, Walter said the seed used by the Centers is something that individuals can use if they choose to do so. There are several variations of milkweed species. Walter encourages individuals to find one that they like and plant it.

The MU Agricultural Research Centers will continue to focus on educating the public on the importance of protecting the monarch population – and other pollinators.

“We’re doing whatever we can to not only promote the monarchs but also inform the public about their decline,” said Tim Reinbott, Bradford Research Center superintendent. “It’s all about improving the monarch habitat and providing education. It really doesn’t take much to improve both.”