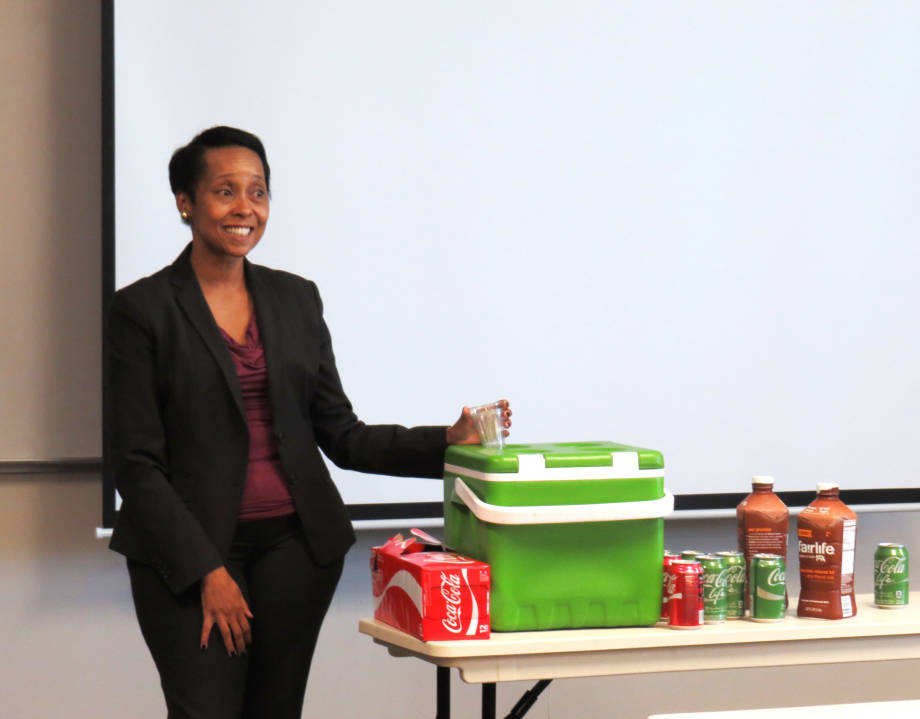 Wamwari Waichungo, vice president of global scientific and regulatory affairs at The Coca-Cola Company, presents products to students.
A

s a self-proclaimed foodie growing up in Kenya, Wamwari Waichungo dreamed about working with food or agriculture, but she had yet to learn of opportunities in food science until attending college in the United States. Today, she is an executive at the iconic Coca-Cola Company, whose products she knew well from childhood.

On Oct. 20-21, Wamwari, vice president of global scientific and regulatory affairs at The Coca-Cola Company, returned to the University of Missouri for the first time since receiving her Ph.D. in food science in 1996. During her visit, Wamwari served as an Executive-In-Residence for the College of Agriculture, Food and Natural Resources (CAFNR).

As an Executive-In-Residence, Wamwari attended a luncheon with scholars, gave a lecture in a New Products Marketing course and visited with Kenyan students at the International Center. She also had the opportunity to taste test beverages in the New Products Marketing course instructed by Assistant Teaching Professor Jamille Palacios Rivera. Another taste testing opportunity was available in in the Food Product Development Capstone course instructed by Andrew Clarke, an associate professor of food science. She also had a chance to engage with Food Science Association students and met with Vice Chancellor and Dean Thomas Payne.

The Coke side of life

Wamwari first started working for The Coca-Cola Company in 2000 as a marketing manager. Growing up in Kenya, she said that she was familiar with only a few large, widely distributed food and beverage companies, and Coca-Cola was one of them.

After graduate school Wamwari worked for ConAgra Foods and the Campbell Soup Company. She always aspired to work for Coca-Cola while in the U.S., but did not have the opportunity. When she returned to Kenya, Coca-Cola contacted her about becoming part of their regional marketing team. 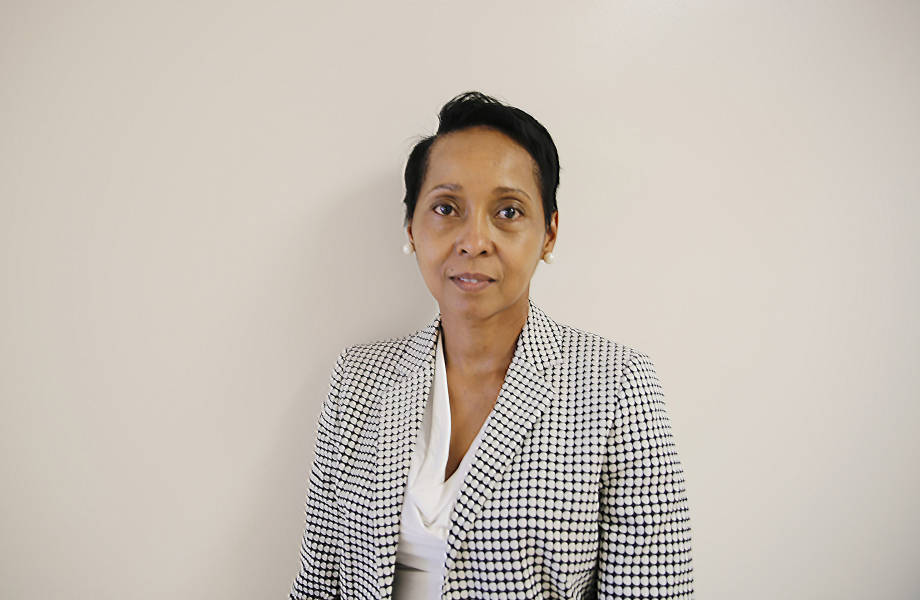 “Actually, it’s interesting because I didn’t apply for the job,” Wamwari said. “They reached out to me and asked if I would be interested in a job in marketing. And I said, ‘I’m not a marketer.’ And they said, ‘No, but we think you can do it. Why don’t you try it?’”

During her first 12 years at Coca-Cola, Wamwari held several positions of increasing seniority including marketing manager, innovation manager, and strategy and business planning director, to name a few. During various assignments, Wamwari had a chance to live in many cities including London, Cairo and Johannesburg. In 2012 she relocated to Atlanta to become the global program director where she led an end-to-end review of the scientific & regulatory affairs function. In 2013, Coca-Cola promoted her to vice president of global scientific and regulatory affairs and in 2014 she was elected vice president and an officer of The Coca-Cola Company by the board of directors.

As vice president of global scientific and regulatory affairs, Wamwari’s responsibilities consist of ensuring the ingredients, manufacturing, labeling and packaging complies with local regulations in all 207 countries where Coca-Cola is sold.

Wamwari has two types of work days: one in the Atlanta office and one where she travels internationally — which is about 60 percent of the time.  In the office, she usually meets with her team and engages with her colleagues and peers. When traveling to other countries, she meets face-to-face with team members, regulators and other policy makers and visits the marketplace and manufacturing plants.

In terms of communicating with diverse persons from various cultural backgrounds, Wamwari has learned that despite their differences in geographical location and history, people are quite similar when it comes to what they care about.

“When it comes to communication, sometimes people think that people will be very different,” Wamwari said. “Because many expect that people from different countries will be different, we often conduct the same research in multiple countries whether it relates to new products or marketing campaigns…but the truth is at the core people are the same. Yes, there are differences with language and some cultural differences, but you’d be surprised by how similar people are.”

She came to this realization that people are similar through doing community work with Coca-Cola such as their 5by20 initiative, a global commitment to enable the economic empowerment of five million women entrepreneurs by 2020.

“When you visit a person who has benefited from the 5by20 program in South Africa versus visiting someone who has benefited from the program in the Philippines, you could just switch out the name and picture of the person.  They talk about how they’ve been able to educate their children or how they’ve been able to provide for their family…It’s a different location and language — the person looks different — but the story is the same.”

Wamwari said one of the best things about working for a global company like Coca-Cola is the opportunities to experience different cultures and places world-wide.

‘The ticket to get in’

After attending primary and secondary school in the Nairobi, Kenya’s capital city, Wamwari came to the U.S. to attend college at Montclair State University in New Jersey. On the day of registration, she was in line to register as a mathematics major when she saw a man sitting at a table labeled “Food Science.” She walked up to him to inquire about the area of study. After his explanation, Wamwari started taking classes as undeclared and eventually made the switch to major in food and nutrition.“I was just telling these young students, ask for what you want, but believe that you deserve it. Because a lot of times we ask for things, and we don’t believe we deserve them.”
―Wamwari Waichungo

“Montclair did not necessarily have a food science program so what Dr. [John] Specchio told me was ‘I’ll help you do a degree in food and nutrition, and it will help prepare you to do a master’s in food science,’” Wamwari said.

While visiting her parents who attended seminary school in Kansas City at the time, Wamwari decided to make a trip to the Mizzou campus because she had heard the university offered a master’s in food science. Wamwari was able to meet with the head of the food science program at the time, William Stringer, to discuss the program. During that conversation she asked for a scholarship, and to her surprise Stringer granted her one on the spot. This exchange was a pivotal moment in Wamwari’s life because it taught her that ambition is often rewarded.

“I use this example all the time,” she said. “I was just telling these young students — ask for what you want, but believe that you deserve it. Because a lot of times we ask for things, and we don’t believe we deserve them. For example, later when I asked Dr. Stringer why he gave me the scholarship, he said it was because of the way I asked — with conviction and confidence. Again, like I deserved it, so he felt obliged to give it to me.”

After the Advanced Food Processing course she took while finishing her master’s, Wamwari’s professor at the time, Dennis Heldman, who now teaches at The Ohio State University, asked her if she would consider pursuing a Ph.D. through the food science program.

“I think it was one of the best things I did because I learned a lot from the experience, but I also think I needed more time to grow and develop before I went out into the job market,” Wamwari said.

Wamwari said the education, exposure and credentials she earned through her time in the food science graduate program at the university was crucial to getting her where she is today. Once in a while she even pulls out a 20-year-old textbook because there were some fundamental classes she took that aid her in her day-to-day work.

“I would not have gotten this position if I didn’t have a Ph.D.,” Wamwari said. “It also really helps me as I engage with scientists and regulators around the world that I have an advanced education. My educational background is fundamental. It’s like the ticket to get in.” 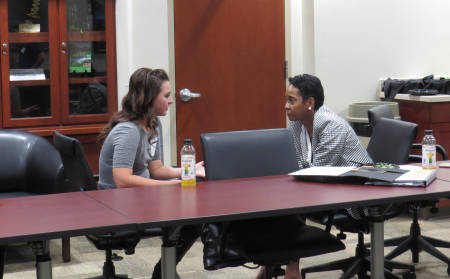 As a graduate student at Mizzou, Wamwari would often take road trips to explore the United States. When she had meetings in various places around the country, she would drive there and enjoy the scenery along the way. While in school, Wamwari traveled to about 40 states.

“During my time as a student, I got to see the country. I drove to a lot of places because I was a poor student and couldn’t afford to fly… I would say that I’ve seen more of the U.S. while I was a graduate student than I have seen in the last three years I have been living in Atlanta.”

Along with encouraging students to be curious and determined, Wamwari also advised that students ought to make the most of their college years.

“Really take advantage of your time here,” Wamwari said. “Live in the moment. Engage with your professors and take advantage of the resources you have here. These things are priceless. Once you graduate, you’ll never get these years and resources back.”