Without flavor research, life would be bland.

“Everything hinges upon the flavor in food. If it doesn’t taste good, no one eats it. So the more we can do to understand what makes things taste good, the better the products are going to be,” said Richard Lane, president of Meridian Flavors and former student of Milton Bailey. 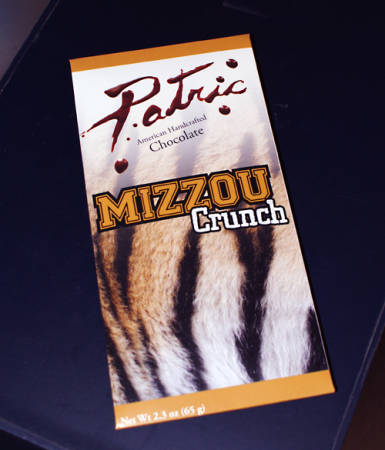 The Milton Bailey Graduate Student Support Fund was created to help fund the education of future graduate students who intend to pursue research in the discipline area of flavor chemistry. During his 43 years teaching, Bailey committed much of his time to conducting research on the flavor of shrimp, meat, pet food products and many other agricultural products.

On April 6, 2013, the University of Missouri honored the retired professor by naming the flavor chemistry lab in Eckles Hall after him. Lane played a key role in the formation of the endowment fund and the naming of the Milton Bailey Flavor Chemistry Laboratory.

Lane is a former master’s student in the food science program and was CAFNR’s 2015 Alumnus of the Year. He has kept in touch with Bailey over the years and said he benefited in the industry from the insight Bailey provided as well as the knowledge that came from research conducted by students in the lab. This sparked an effort to create an endowment fund in Bailey’s name that would help support graduate students who enter the program.

“I recognized that there was a lot of good work that had come out of that laboratory over the years—and there still is a lot of good work coming out of it,” Lane said. “I thought it would be good to recognize that program and try to encourage more contributions to help graduate students in that area.”

In 2006 McClure and Viviane Ducret, his wife, started Patric Chocolate, a craft chocolate company based in Columbia that converts cocoa beans to bars. McClure received a bachelor of arts in religious studies from Mizzou in 2005, but he found it difficult to delve into the complex domain of flavor chemistry without the knowledge one would gain from a food science degree.

“I had been struggling for almost ten years to really understand flavor chemistry as it pertains to chocolate and chocolate ingredients, but without a chemistry background, I’d gotten about as far as I reasonably could by myself,” McClure said.

“I had been struggling for almost ten years to really understand flavor chemistry as it pertains to chocolate and chocolate ingredients, but without a chemistry background, I’d gotten about as far as I reasonably could by myself.”
―Alan McClure

After taking prerequisites for the master’s program and beginning his first semester of graduate classes, McClure has since discovered an enthusiastic approach to food science.

“Already I can look at various food products, take yogurt for example, and make some pretty good guesses about the various genera of microbes that have played a role in their production,” McClure said. “It’s like a food nerd superpower.”

McClure’s interests include various dimensions of food science such as cheese-making, brewing and fermented food products, but his formal research will delve into the issue of bitterness in dark chocolate. Although Patric Chocolate had to slightly cut back production and sales so McClure can receive the training necessary to provide the best product possible, McClure still finds time to experiment with his craft.

“In the little spare time that I have, I am working on new chocolate bars here and there,” McClure said.  “It can be tricky though, since we have to source the raw cocoa beans for our bean-to-bar process.  But it is quite rewarding and delicious of course.”

McClure first developed a relationship with the food science department at MU’s College of Agriculture, Food and Natural Resources when he partnered with CAFNR to produce the Mizzou Crunch chocolate bar. This already established relationship gave the university an opportunity to provide something in return for McClure’s contribution to the Mizzou Crunch bar project.

Ingolf Gruen, associate professor and the chair of the food science program, selected McClure as the first recipient of the fund. As Bailey’s successor, Gruen’s research also revolves around analytical flavor chemistry with highlights of his research being the development of a functional ice cream that is purportedly healthier as well as an ice cream that has a delayed flavor release.

“Giving the fund to a person who has already made an intellectual contribution to the university—[Mizzou Crunch] was done with Alan’s expertise, his support,  we used his company to make the bar and all the students learned something—is kind of a win-win situation,” said Ingolf Gruen, associate professor and chair of the food science program. Gruen has extensive background in the study of ice cream, wine and other food flavors and he will guide the activities of McClure’s future research. 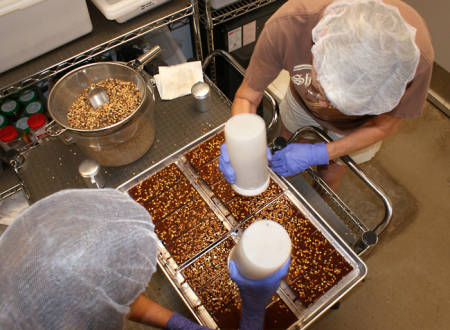 “[The students] were really able to think outside of the box,” McClure said. “Of course, ‘the box’ is often there for a reason too, so I was able to give direction regarding what types of ingredients simply wouldn’t work in a chocolate bar—for example high-moisture additions that could damage texture.  Overall, I think that everyone had a really enjoyable experience, and the resulting bar was fantastic.”

The support fund has enabled McClure to work on his research without an abundance of financial stress. Gruen said that the endowment fund acts as a motivating factor for students to explore the mysteries of flavor chemistry.

“The Milton Bailey Graduate Student Support Fund is permitting me to spend the time I need to better develop my food chemistry skills in the lab and beyond,” McClure said. “This is imperative if I am to shine some light on one or more of the mysteries that still exist regarding chocolate’s wonderful flavor, and there are many.  I am truly thankful to be the first recipient of the fund, and I’ll certainly work hard to make the most of it.”

Bailey, a World War II veteran, attended college at Tulane University in his home state of Louisiana after serving in the Army Air Force Cadet Corps and in the Eighth Air Force in England from 1943 to 1946. He received his B.S. degree from Tulane University in 1949. Bailey then attended Louisiana State University where he received his M.S. and Ph.D. in biochemistry under the direction of E.A. Fieger, chair of biochemistry. Bailey served on the LSU research faculty where he used bioanalytical chemical technologies to study the flavor and color changes in foods during processing and storage. His knowledge in fundamental biochemistry was accumulated from completing seven courses taught by Jordon Lee, who received his Ph.D. in biochemical nutrition during study under Albert Hogan at MU. Hogan was a renowed biochemist who determined the requirements of farm animals for certain B vitamins and trace elements. Bailey joined the MU faculty in September 1958 when he accepted a position in animal husbandry. He taught and carried out research for a total of 43 years: eight at LSU and 35 at Mizzou.

“[My favorite thing about teaching and researching was] to help a number of students develop an interest and association with food and flavor precursors,” Bailey said. “I loved the challenge of constantly investigating the relationship between chemical content, palatability and flavor of food.”

Bailey was one of the founding faculty members of the food science program at MU when it was created in 1967. During his years at the university, flavor research played a significant role in the creation and development of meat products. Bailey co-authored a book, “Warmed-Over Flavor of Meat,” and has authored over 100 journal articles. He taught more than 11 courses and mentored numerous graduate students during his time at MU. At one time, 15 of Bailey’s former students worked as flavor chemists in the industry. 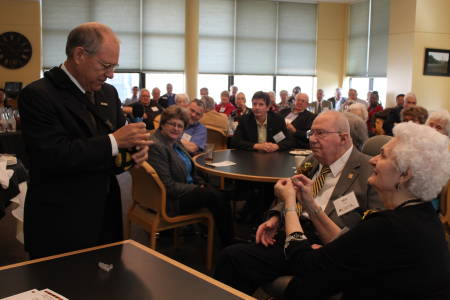 One of Bailey’s students was Lane, now the president of Meridian Flavors, Inc. based in St. Louis. Lane said as a teacher Bailey was known for having some difficult tests, but also noted that he had a unique ability to get his students interested in his lectures.

“His lectures were always interesting,” Lane said. “He did a lot of really careful reading and investigation. So when he gave a lecture, he had really done his homework. He would bring in different facts that you could relate to in the subject matter and made it very interesting.”

Since graduating with a M.S. from the food science program in 1973, Lane has been active in the industry as a flavor chemist and entrepreneur. Lane first met Bailey when inquiring about entering the graduate program, and over time Lane and Bailey have kept in touch while united by a shared interest in food chemistry.

“I think he was interested in what I was doing career wise, and I kept in touch with him because he was always a source of information, and he just kept doing things and was on the cutting-edge of some really unique analytical technique,” Lane said. “I kept in touch with him because he became a very useful resource in my career and I would go back to him if I had technical issues in the line of work I was doing in flavor development.”

Along with sharing an interest in flavor chemistry, Lane and Bailey enjoy spending time fly fishing.

A legacy to be continued

The Milton Bailey Graduate Student Support Fund has raised 40 percent of its $100,000 goal. The fund is still accepting donations and hopes to reach its goal in order to produce a long-lasting endowment fund that will be able to support several graduate students over a long period of time.

“There is a lack of important data demonstrating the link between chemical content and flavor of food,” Bailey said. “Hopefully further research will contribute this data to help resolve these flavor problems and impact teaching programs and industry.”

Lane, who led the effort to create the fund, received a fellowship from the Pork Producers Association when he was a graduate student. He said that without this funding, he would have not been able to finish the program because it became impossible to work 20 hours a week, attend classes full-time and to conduct research. After graduating from the program, Lane co-created his own food flavor manufacturing company, St. Louis Flavors. In 2002 Lane and his colleague sold the company to Kerry Group and went into retirement. In 2009 he came out of retirement to start Meridian Flavors. Without financial support, none of this would have been possible.

“I thought that if there was a way we could set up a type of stipend to help graduate students who were in the same boat I was in, then that would help the program and the students. I feel that there is really good research that has been done in that laboratory over the years and it needs to keep going.”

Lane said that the endowment fund is prosperous for the university and the flavor industry in more than one way. The university benefits because with the support fund it is able to fund graduate students in the program that in turn can produce better research without the stress of financial burden. The industry benefits because it obtains access to academic research in flavor chemistry and will gain educated, well-qualified job candidates who will later enter the workforce.

“There aren’t that many schools that have a flavor research capability,” Lane said. “There’s only a handful. If there is something we can do to just keep building on the history of it, then that is good for the university, but I think it is also really good for the flavor industry.