AFNR professors do everything to sharpen the understanding and skills of their students, but a student can only grow so much within the confines of the classroom. Over the summer, several CAFNR students seized the opportunity to branch out into professional organizations while also putting their academic knowledge and skills to the test.

Senior Abigail McNeill honed her food science skills while interning with Hormel Foods during the summer of 2015. McNeill will take root in the company as a full-time employee after she graduates in December.

“One of the main things I loved about my internship in quality control was that every day was different,” McNeill said. “I got to work on a variety of projects at different locations including temperature validations, management systems, employee training, and just learning about the daily responsibilities of a quality control supervisor.”

McNeill is originally from Foristell, Mo. Along with cooking and baking, McNeill’s interests include Mizzou football, fishing and spending time with family and friends. McNeill will assume a position at Hormel as a quality control supervisor upon graduating in December with a Bachelor of Science in Food Science and Nutrition and a minor in agricultural economics. McNeill originally found out about her internship opportunity through the College of Agriculture, Food and Natural Resources’ Career Services.“Hormel treats their interns like regular, full-time employees. I was given responsibilities and projects that were meaningful for the company and gave me amazing real-world experience.”
―Senior Abigail McNeill

One of McNeill’s favorite aspects of interning with Hormel was the way the company made her feel like an active, essential member of the team. This paved the way for her engaging in educational activities and professional experience she could not receive in the classroom.

“Hormel treats their interns like regular, full-time employees,” McNeill said. “I was given responsibilities and projects that were meaningful for the company and gave me amazing real-world experience.”

Despite Hormel’s size and its prominence as a major meat processor, McNeill found the opportunity to network with the company’s executives because of its close-knit community.

“I was also impressed with how accessible that upper management in such a large company was — everyone from the vice presidents down were truly excited to talk to you and help you any way they could,” McNeill said. “I even ran into the CEO in the hallway one day and had a conversation with him about my internship.”

McNeill had the opportunity to travel to facilities in Texas, Illinois, Wisconsin and Nebraska. During the internship, she learned that working in quality control was something that she would enjoy as a career choice. McNeill said that the position was a great fit for her.

“I feel very lucky to have be able to travel and work at so many different types of production facilities that make a variety of products; it was great exposure to the food industry,” McNeill said. “Also, I got to meet a lot of incredible people, both employees of Hormel and other interns, along the way.” 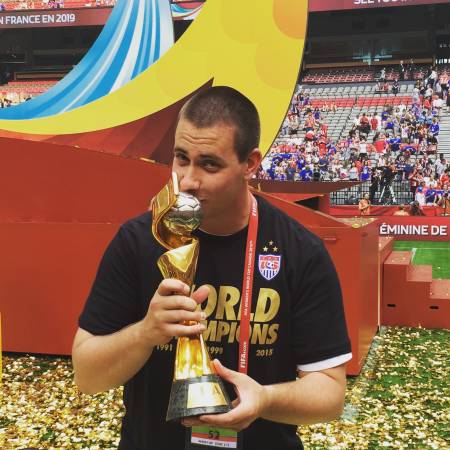 Senior Ryan Dell kicked off his career as assistant equipment manager for the U.S. Soccer’s Women’s National Team (WNT) as it traveled across the globe this year and eventually conquered the World Cup.

Dell is a senior pursuing a degree in sports management. He grew up in St. Louis where he played soccer at Mehlville High School. After originally coming to Mizzou for journalism, Dell found a passion for sports management while serving as a manager for the Mizzou soccer program. After he graduates, Dell will continue working with U.S. Soccer.

“I think sports gives you an opportunity that not everyone gets to see: the traveling, the involvement, the view from the other side,” Dell said. “You’re not just a fan anymore. You’re more than that.”

Dell was hired as an assistant equipment manager in January 2015. Dell found the opportunity through working for Mizzou Soccer and the Women’s National Team’s U-23 Youth camps. Part of his responsibility was to move the WNT’s equipment across the country along with preparing the equipment for use on the field during practice and games. Dell said his biggest challenge was probably transporting all the gear around the globe during the World Cup tournament and the games that led up it.

“I think the thing about sports is that it’s not easy,” Dell said. “And you’re always doing more than you think you’ll ever do. And I think that’s part of the fun of it because you have touched so many pieces of the operation.”

But despite the strenuous activity of moving the team from plane to field to hotel, Dell was able to stay enrolled full time at the university while juggling internship classes and his full-time commitment to the WNT. That was another challenge, but Dell looks forward to traveling with the team without worrying about classes.

“People are going out to socialize, and you’re going back to your hotel room to do homework,” Dell said. “And that part was difficult because you want to go out. You want to see the cities. You want to hang out with your friends and everything, but you’re back in your room trying to get an assignment in.”

On July 5 the U.S. Soccer WNT won the 2015 FIFA World Cup against Japan. For Dell, the moment was especially rewarding because it was the moment that he realized that everything he, the staff and the team’s extensive training and hard work had finally paid off.

“There’s all this tension that leads up during the tournament for months and then finally you achieve what everyone wants to — it’s a dream,” Dell said. “It’s a dream come true. All the tension you let go, and you get to enjoy yourself finally. It was a special night out there in Vancouver, and it’s something I’ll never forget.”“That’s the pinnacle of soccer. It’s winning the World Cup. It’s what you dream about when you’re a little kid lying in your bed.”
―Ryan Dell

Dell said that his favorite moments from working with U.S. Soccer over the last 10 months has been his first international game in France and the St. Louis game where he had the opportunity to work in the St. Louis Cardinals’ clubhouse in his hometown with family and friends in the stands among the largest stand-alone crowd for a WNT home game. And, of course, Dell will never forget winning the World Cup.

“Just like any other meteorology major, I absolutely love it when storms are about to roll through the area,” Fairman said. “I want to know how everything works, and the more I learn about the weather, the more I realize how little we really know, which is really fascinating to me — it’s something humans don’t have much control over.”

Fairman is from Wildwood, Mo., and is a student in the School of Natural Resources pursuing a Bachelor of Science in Atmospheric Science. After receiving her degree, Fairman plans to go to graduate school for a master’s in the same field. Fairman’s interest for weather and her passion for science and math made her a perfect fit for the internship.

“I love how much math and physics are involved, and how equations can supply an explanation on how the atmosphere works,” Fairman said.

Fairman worked with a mentor to collect information and create data sets that will help meteorologists produce more accurate cloud cover forecasts. This information was collected from a sensor on one of NASA’s satellites.

“I would walk into the office, grab a cup of coffee, and get straight to the research project that my mentor needed help with,” Fairman said. “As complicated as the research sounds, I was able to learn how satellites can be used to detect clouds, how scientists can improve the accuracy of this, and how new research can actually be used by meteorologists, none of which I really understood prior to the internship.”

At first Fairman was intimidated to be working among top-notch researchers and rocket scientists, but her initial thoughts were relieved within the first few days. NASA employees encouraged her to be an active part of the team and were willing to help when needed. Fairman’s experience at NASA helped her cultivate a determination to find her niche in the field.“I have learned that having confidence in myself is the most important thing when it comes to working in a science field.”
―Sarah Fairman

“I have learned that having confidence in myself is the most important thing when it comes to working in a science field,” Fairman said. “There will be people who know more than me no matter what, and even if that is the case, I can still contribute my own ideas and opinions to help with whatever research is going on at the time.”

“In policy, there is no average work day, and I think that is what makes it fun,” Beach said. “You kind of focus on whatever the topic is on that particular day. In general, I was working with specific offices in Congress to set up visits, attending committee hearings, and writing policy briefings on issues that would affect fellow Land O’Lakes employees or business units at Land O’Lakes.”

Beach is an agricultural economics major with an emphasis in public policy from Pilot Grove, Mo., where she grew up on a farm. She has three minors that build on her understanding of public policy: international agriculture, rural sociology and leadership in agriculture. After graduating in May 2016, Beach plans to return to Washington, D.C., to pursue a career in agriculture policy. “I don’t know if that means being on the Hill and working for a member of Congress, working for a trade organization or industry or doing a lobbying or political action committee role,” Beach said. 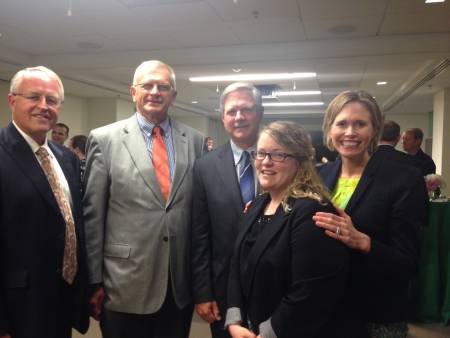 While interning with Land O’Lakes, Beach had the opportunity to attend events like the World Food Prize Laureate and a Women in Agriculture luncheon where she was able to network with professionals and learn about international initiatives to end world hunger.

In terms of policy, Beach wants to work with agricultural issues tied to the farmers’ role and how they produce, distribute and export commodities to those who need them.

During her summer in Washington, Beach’s experience reinforced her desire to work at the Capitol in agricultural policy. Beach said she is grateful for the roles her professors and fellow Land O’Lakes employees played while helping pave the way for her desired career path and teaching her how to set an example as a leader.

For Beach, her Land O’Lakes experience taught her the true meaning of networking.

“I think the best piece of advice I got while working in D.C. was that networking is not how many people you meet or how many business cards you take away, but instead it’s how well you do your job and how willing your boss is to speak on your behalf,” Beach said.