Researchers at the Department of Soil, Environmental and Atmospheric Sciences recently found a correlation between climate variability patterns and crop yields: Missouri crop yields can be positively or negatively affected by two climate patterns in the Pacific.

“Really the purpose of this was for long-range forecasting of crop yields, so we can kind of give farmers a heads up of what the next year is going to be like for them,” said Chasity Henson, a SEAS graduate research assistant.

The climatologists studied two climate variability patterns, the El Niño Southern Oscillation, or ENSO, and the Pacific Decadal Oscillation (PDO). During the El Niño phase of ENSO, the surface temperatures of water in the Pacific Ocean are warmer than normal at the equator. It typically changes phase every two to seven years. In Missouri, El Niño creates wet summers and dry winters. The positive phase of the PDO affects the state in a similar way, but has a longer variability of around 20 years. 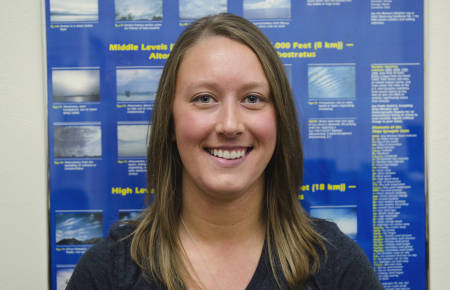 Climate and crop yields vary on different time scales. Henson wanted to see if these two time scales lined up. They did. “If you compare crop yields for each ENSO phase as well as each PDO phase, then the yields are different,” she said.

The opposite of these phases, the La Niña and a negative PDO phase, corresponded with higher wheat yields and unfavorable yields in summer crops.

“I quantified it, so I have actual bushels per acre and how it varies with each ENSO phase, so El Niño or La Niña.” Henson can pull data for each region in Missouri, and make a prediction down to bushels per acre, of how these weather patterns affect growers.

Henson’s findings also suggest PDO may affect ENSO. She compared the two oscillations to waves. They can be positive or negative, and every once in a while, the waves will overlap, creating an even more powerful spike in crop yields about every 15 years.

Henson plans to use these results to build long-term predictions for growers. It could prove to be a useful tool for Missouri farmers when planning crop rotations. If the upcoming weather pattern shows a poor year for corn, farmers can plan ahead and plant soybeans instead. Henson also said knowing which crops are more likely to be successful can help predict market outlooks. She hopes to begin publishing long-term forecasts in early 2016. 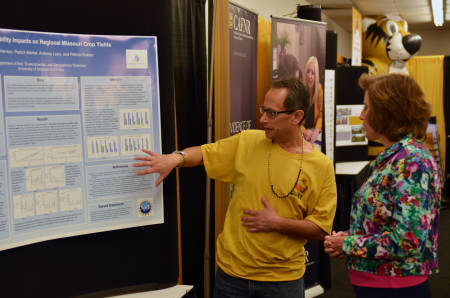 The methodology of the study comes from prior climate studies conducted by Lupo and Professor Igor Mokhov, director of the AM Obukhov Institute for Atmospheric Physics in Moscow. In the past, researchers used the same method to find correlations between climate variations to the occurrence of smaller weather events like tornadoes. Henson used the same technique, instead applying it to agriculture.

“I’m done with this study now, but it’s always applicable to other crops and other regions or other states. Anybody can copy this same methodology and repeat the same thing and come out with results for a specific region for a specific crop,” Henson said.

Henson said she is looking forward to researching more thoroughly the correlation between PDO and ENSO, a relationship climatologists call an interaction harmonic.

After completing her master’s in atmospheric science in May, she plans to pursue a Ph.D. and continue researching the interaction between PDO and ENSO. While her most recent discovery provides significant evidence that the two systems affect each other, she wants more.

“I have strong evidence that it exists through these crop yields, but it’s not actually been proven, I guess I should say. You can’t really prove anything anyway, but I just want to have better evidence.”