They had all played the game of basketball to varying degrees before — but never like this. As sunshine peaked through the windows of the MU Student Recreation Complex on a sunny September afternoon, the students and professor of the Sport Management Freshman Interest Group from South Hall had gathered at Court No. 7 to see one of the world’s most popular sports in a new light. 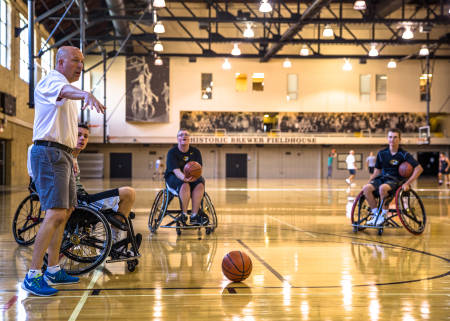 Ron Lykins, head coach of the MU wheelchair basketball program, provides instructions on how to play the game to a group of students.

The class of 20 students took turns figuring out to how to maneuver in 10 specialized wheelchairs that are the same kind used by the University of Missouri’s wheelchair basketball intercollegiate team as a fun and unorthodox way to fulfill a diversity requirement under the instruction of MU head coach Ron Lykins and his assistant, Scott Meyer. The duo first went over how to move around in the chairs before moving onto ball handling, dribbling and shooting.

“Getting used to the chair is one thing but when you have to dribble you enter a whole new, different world because you’re only allowed to touch your wheel twice for each dribble, so push, push, dribble, push, push, dribble,” said Nick Watanabe, an assistant teaching professor in the Department of Parks, Recreation and Tourism who oversees the Sport Management FIG, which is one of several thematically focused academic programs (and one of 11 connected to the College of Agriculture, Food and Natural Resources) in which a group of 15 to 20 students take classes together and live in the same community under the guidance of a peer advisor.

He later mentioned that it would be possible to smell burning rubber from the tires going so fast on the court. Watanabe was referring, though, to the fast play of Lykins’ team, a tempo that comes as a result of experience, comfortability in the chair and significant upper body strength. Those elements were lacking for the first-time participants, but in their place was a growing appreciation by the students for athletes with disabilities. 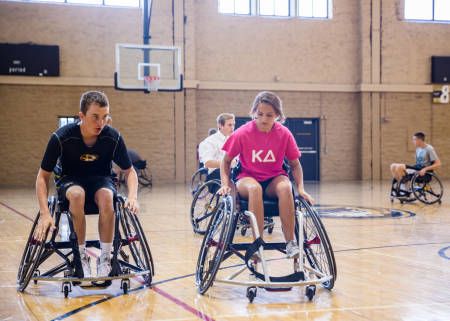 Freshman Mike Carr and Hanna Wimberly try their best to generate speed in their wheelchairs.

“I didn’t shoot as nearly as hard as I need to. The game’s really hard. I was just rolling and then from half court Clayton just shoveled it into me and I was wide open for a 3-pointer. I need to be way stronger,” says Mike Carr said about his failed attempt at shooting the ball passed by classmate Clayton Alferman.

“I was really intimidated at first,” added Riley Christiansen. “The chair’s actually pretty easy to maneuver, but the shooting, the passing and the ball handling is definitely more challenging than stand-up basketball.”

Hanna Wimberly said that she found it easier to pick up loose balls than she thought it would be. “I played basketball my whole life so it was a little difficult to sit in a chair and not use my legs because I’m so short,” said Wimberly, who stands 5 feet tall. 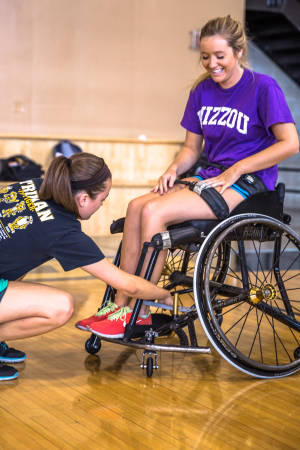 Emily Russo, a peer advisor in the Sports Management FIG, helps Elizabeth Burkett get situated in her wheelchair.

Emily Russo, a junior PRT and journalism major who serves as the FIG’s advisor, remembers the first time she stepped into one of the chairs last season when the event was first conducted after Watanabe brought up the idea to Lykins and Bryan Maggard, MU’s executive associative athletic director who helps assist with Sport Management FIG.

“I was a 3-point shooter in high school so it was like all legs and here it’s the opposite. It’s all arms,” said Russo. “It’s so much more upper-body strength. It’s the same follow through, but you’re always short in comparison to what you were.”

During the games themselves, the experience of Russo and Watanabe was evident as they appeared to have a different gear when it came to getting to where they wanted to go on the court. Watanabe’s students all agreed that he was the overall top performer. “He goes hard in everything, I’d say,” remarked Carr.

“Last year they found out what a pain I can be,” Watanabe said. “I was going “Let’s go! Gimme the ball!’”

Watanabe talked about how he thought the event would be a good fit for the PRT program and its lineage of coming up with like-minded programming such as the Boots on the Green golfing event that was started by associate professor Jerry Hitzhusen. 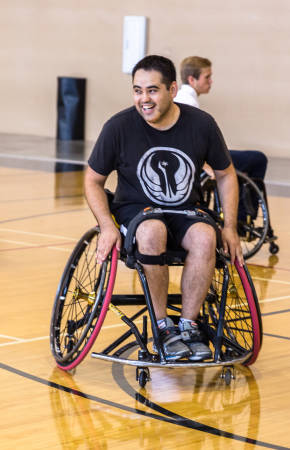 “We have a tradition of those programs and the hope was to sort of continue that while building awareness and having fun at the same time,” Watanabe said.

As Lykins informed those gathered before the activities began, wheelchair basketball formed in the 1940s, as a form of fitness and rehabilitation for World War II veterans. The sport is now played by athletes from more than 90 countries.

At the Paralympic Games, the final event is always the gold medal game of men’s wheelchair basketball — which is exactly where, as the head coach of the U.S. men’s team, Lykins hopes to be with his team when it travels to Rio de Janeiro, Brazil, next year.

MU, which started its wheelchair basketball program 10 years ago, is just one of seven schools in the country that has a team at the intercollegiate level, though that number should rise in the upcoming years. The team will open its season on Oct. 23 at a tournament at Southwest Minnesota State University.

Maggard, who watched the festivities from the stands, said given the program was already established here by Lykins, it was “a natural fit to expose our Sport Management FIG students to this caliber of sport.”

Maggard recalled how a large portion of the MU’s team showed up for last year’s version of the event, and how they gave an exhibition of a much faster game. “What I’ve noticed from our past two experiences here is these individuals are true athletes,” he said. “When you really watch somebody who knows what they’re doing in a chair, it’s amazing to see. They’re just so smooth, so fluid. It is definitely an acquired skill and very fun to watch.” 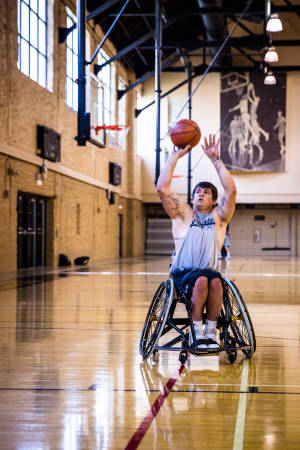 Matt Bollig, a CAFNR senior, has been playing for the MU wheelchair basketball team for three years.

One senior member of the team, Matt Bollig, took the action in next to the baseline of the baskets. Sitting in a tank top, his large, defined arms affirmed the need for advanced upper-body strength to succeed in the sport. “It takes quite a bit for sure,” he said.

Out of anyone gathered in the gym, Bollig might have known what the students were experiencing the best after picking up the game four years ago. Bollig, a CAFNR student who is a PRT major, started playing the game just five months after suffering a weightlifting injury as a football player at Ottawa (Kan.) University.

“What they would realize is probably how high the goal seems to be and then how hard it is to maneuver the chair while trying to shoot the ball and trying to dribble. When I first started playing, that was the biggest trick for me and I started all four years in high school. It was just different,” Bollig said of his playing days as a shooting guard at Chanute (Kan.) High School.

“This is easier to me than regular basketball, but that’s because I’ve put more effort into this than I ever did regular basketball. I was a football guy in high school, so I didn’t necessarily try too hard, but now I’m committed because this is my college sport. I’ve gotten a lot better and made some good strides with it.” 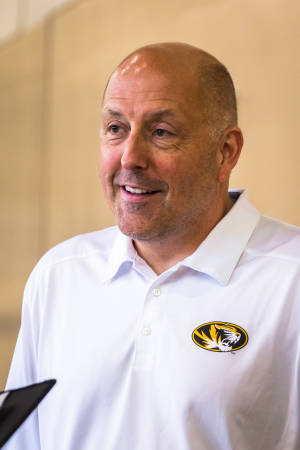 Ron Lykins serves as both the head coach of the MU wheelchair basketball intercollegiate team and the U.S. men’s national team.

Lykins first saw Bollig playing for a club wheelchair basketball team at a tournament at Pittsburg State University before inviting him to Columbia. “He was a very good athlete before he got hurt,” Lykins said. “You could just see just how quick he’d pick the game up, so we really wanted to get him here and be a part of this because his athletic skill level was so high.”

After play ended, one student went over to Watanabe and informed him that this was the best class that he had all year. “I think this is great because they learn something and they have fun,” Watanabe said.

Lykins then gave his take on the outing. “I think they were afraid you were going to have a heart attack,” he said to Watanabe with a laugh before continuing his thought. “It’s one of those things they’ve never done before. Very seldom does someone say ‘Oh yeah, I’ve done that.’”

The experience gave the class a great segue to its next meeting to talk about the issue of diversity in a traditional classroom setting. “They can think about ‘Well yeah, I’ve tried out the wheelchair and man, it’s so different compared to everything else I’ve done, especially from a sporting context,” Watanabe said.

They could also chat about the spirited play of their professor.

“You know what’s going to happen tomorrow? I won’t be able to move my arms probably.” 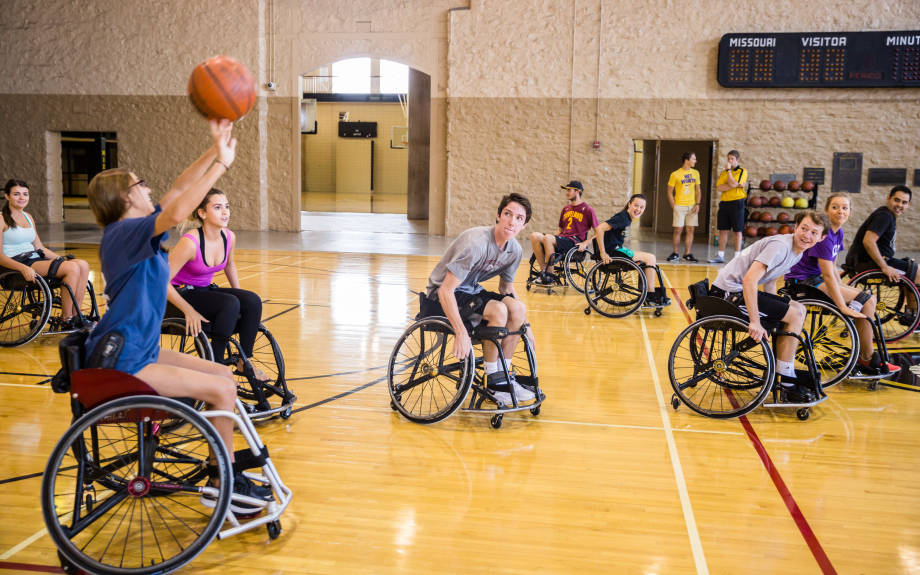 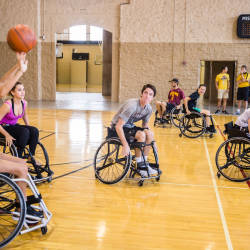 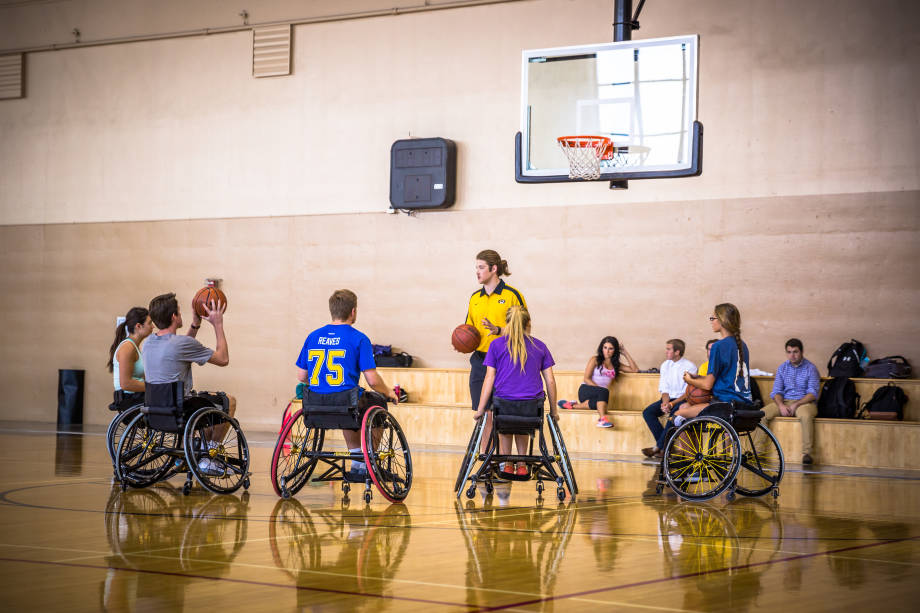 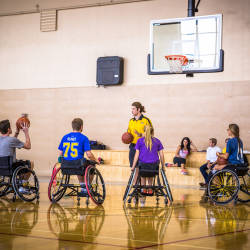 Scott Meyer, assistant coach for the MU wheelchair basketball team, instructs a group of students on the fundamentals of shooting. 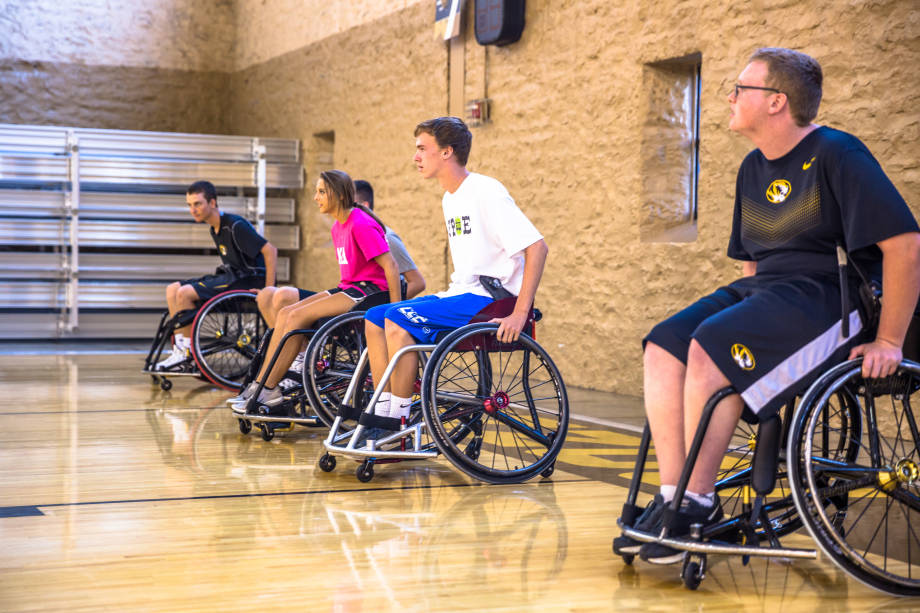 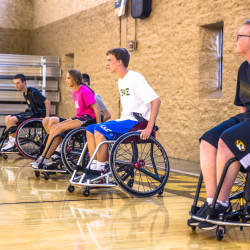 Freshmen (from left) Mike Carr, Hanna Wimberly, Matt Whitley and Jake Reiling prepare to do a drill during a wheelchair basketball demonstration. 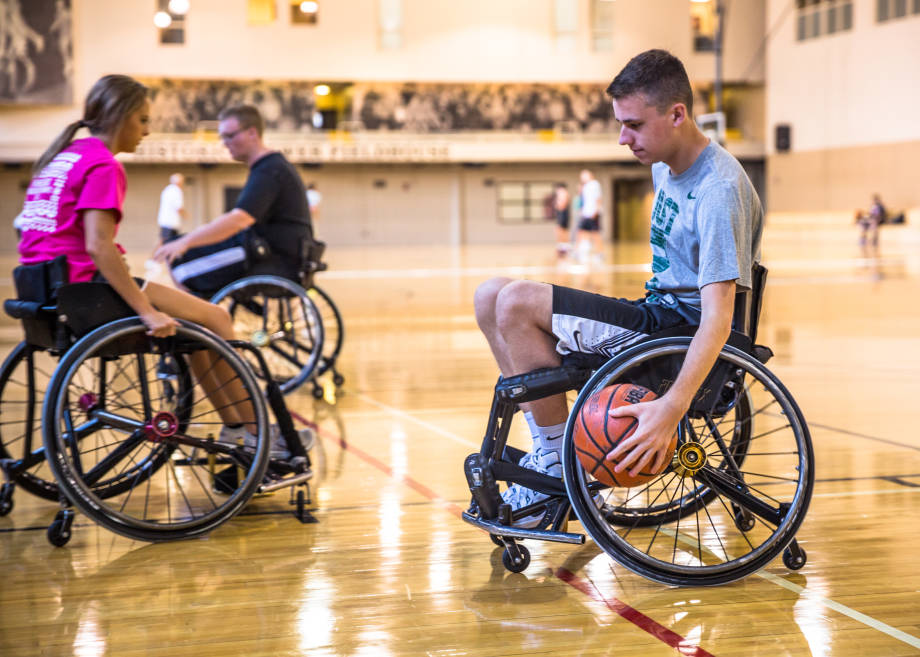 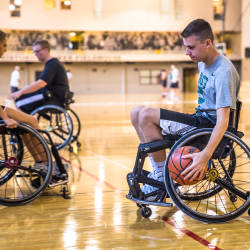 Freshman Clayton Alferman works on handling the ball for the first time while in a wheelchair. 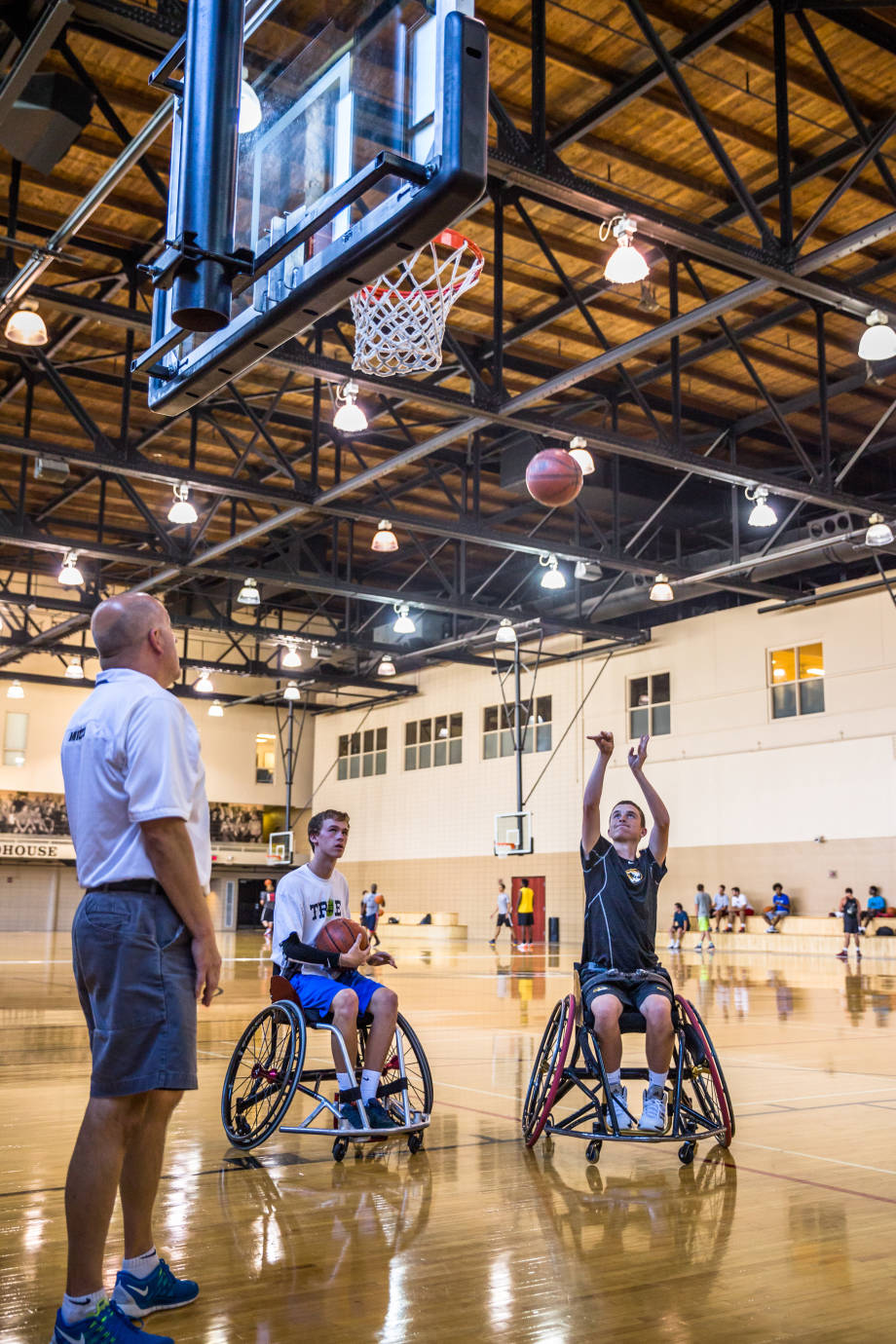 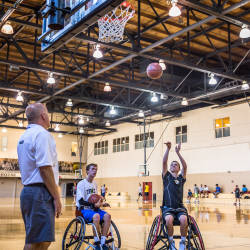 Coach Ron Lykins looks up as Mike Carr attempts a shot during a wheelchair basketball demonstration at the MU Student Rec Center. 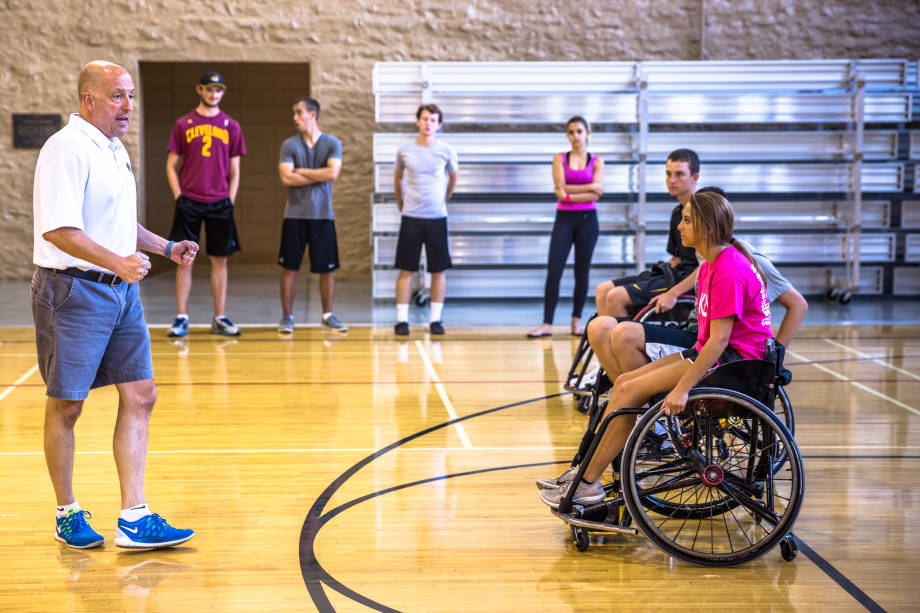 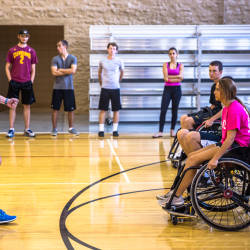 Ron Lykins, head coach of the MU wheelchair basketball program, instructs Hanna Wimberly and other students how to properly use their wheelchairs. 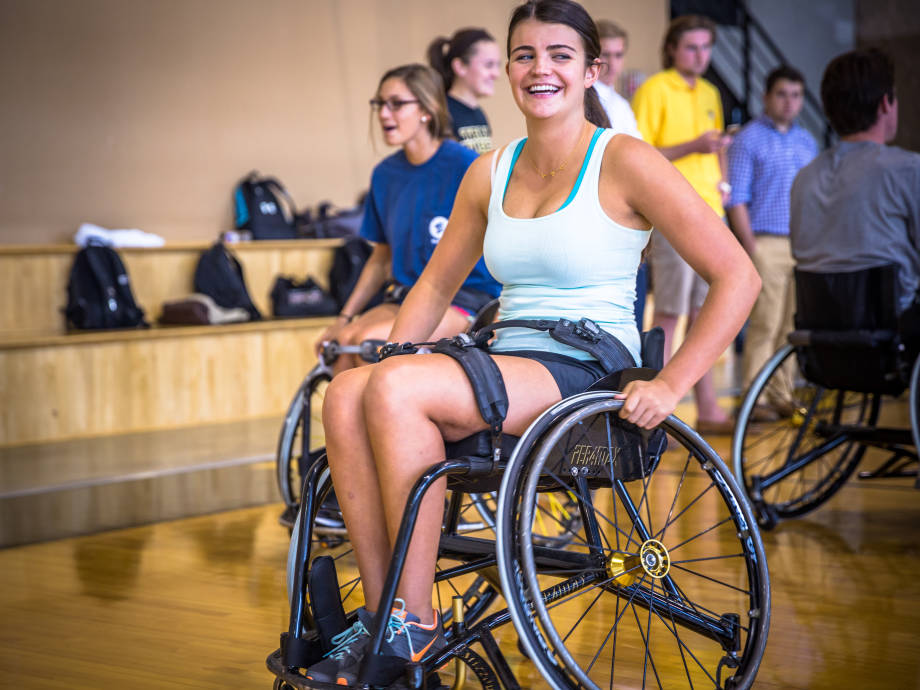 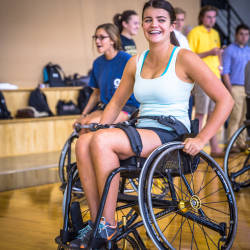 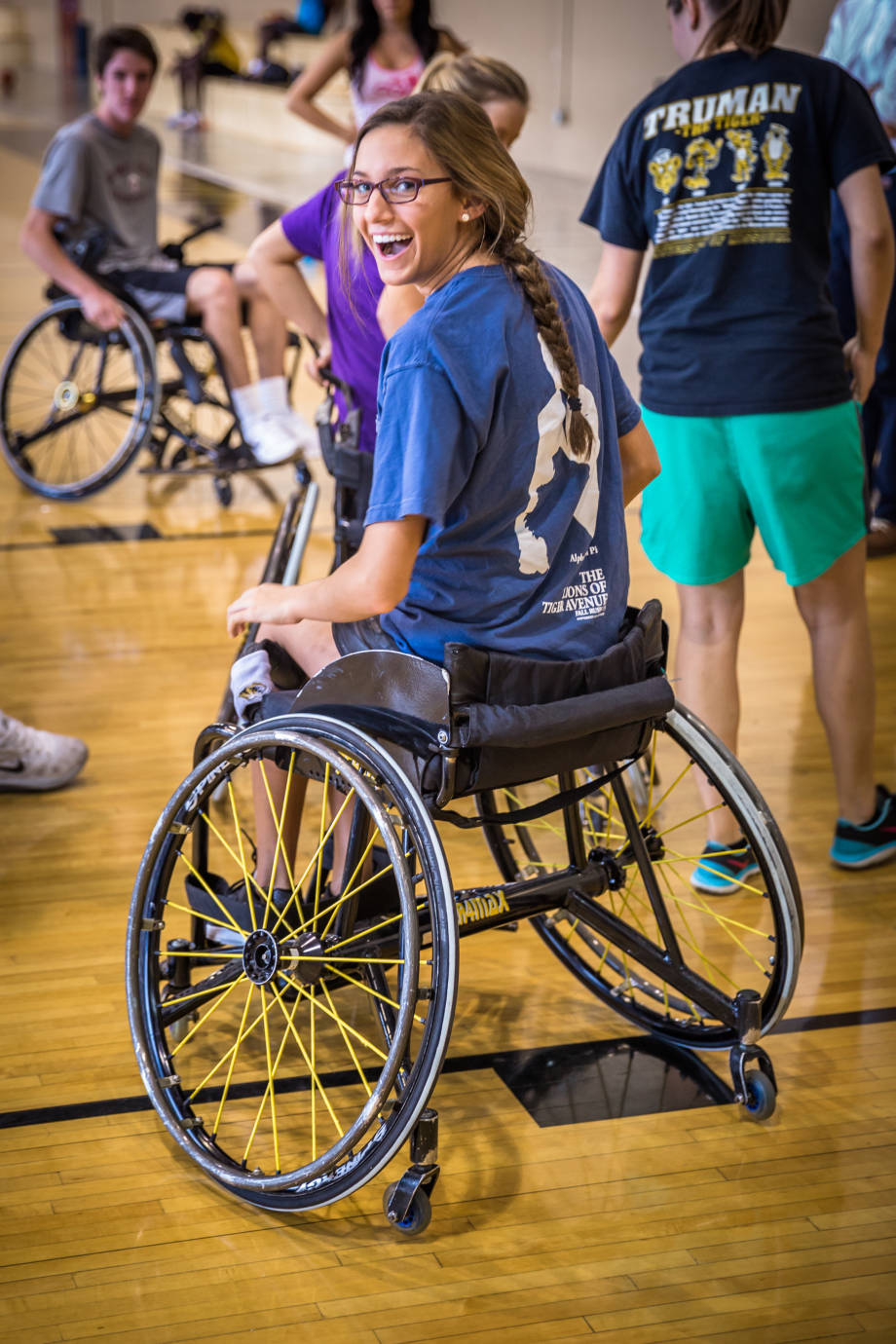 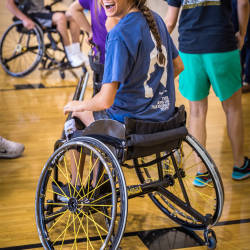 Freshman Cosette Eshelman is all smiles in her wheelchair.