The voice of Grant Bolton, a graduate student in MU's… Expand ▸

During the day, you can find him in an entomology lab, sending electrical impulses through invasive fruit flies. But after the kids are asleep, plant sciences researcher Grant Bolton moonlights as a freelance voice-over actor.

“I didn’t really know much about voice overs until I really got into it, but if you listen for them they’re everywhere. Not just the radio. Radio, television, over the PA system at an airport—someone’s got to do that,” Bolton said. “Someone’s got to say that. There’s a person behind the voice.”

Bolton, who is working on his doctorate degree in Entomology, started doing voice work almost by accident. In his undergraduate years at Missouri State University in Springfield, he set up a small homemade recording studio to produce music for his garage band. A friend put together an animated advertisement for a start-up called Snip Story, and asked Bolton on board about three years ago. 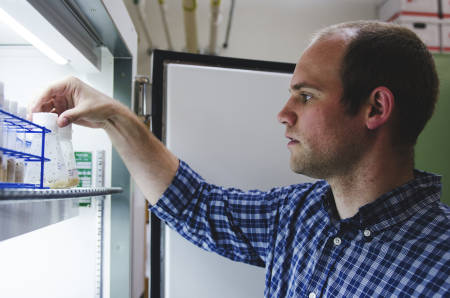 Bolton looks at a sample of spotted wing drosophila, the invasive fruit fly he studies.

“I actually did the music and the voiceover for that start-up company, a little YouTube video. I really enjoyed the project, so I started looking online for other jobs I could take,” Bolton said.

“Some of my audio books were some of my favorites. I did one that was a western romance. I’m not much of a romantic reader, but it was fun to do all the different accents. There were so many accents in that.”

Bolton said his experience in theater has helped with his characters, but the best practice for a voice actor is talking to yourself and learning how to imitate other voices. He’s been copying cartoon characters since he was a child.

“You really just got to make mistakes and be silly and sound like a dork…. It’s really through experimentation and talking to yourself a lot,” he said.  “A lot of people like to sing in the car. I like to have conversations with myself in the car.”

Outside of the studio

Things slowed down as Bolton got married and started a family. Today, he balances his family life with Ph.D. work and a handful of voice over projects. Bolton finds quiet time to record in his homemade studio after his children’s bedtime. His most recent project was a promo for College of Agriculture, Food and Natural Resources International Programs. 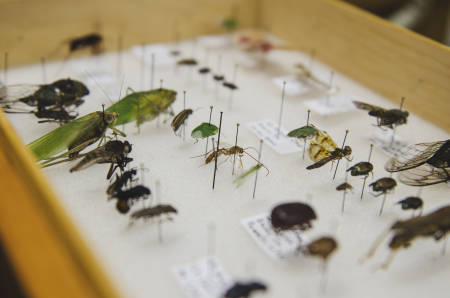 Bolton has been interested in insects since he was about six years old.

Bolton’s day job is a far cry from voice acting. Since Aug. 2014, he has studied the chemical ecology of spotted wing drosophila, an invasive fruit fly. It’s no surprise. Bolton has been following ant trails since he was six years old.

“I’ve been passionate about bugs since I was probably six,” Bolton said. “My dad always told me I should be an entomologist, and I would tell my teachers that, and a lot of them would be like ‘What is an entomologist?’ So I felt like I had a one up on some of my teachers… That kind of encouraged me to pursue it.”

Spotted wing drosophila is an invasive berry pest introduced to the U.S. in the last decade. Adult flies lay eggs in ripened fruit, which can then become contaminated with larvae. Bolton is studying what chemical these flies are attracted to in order to build traps to help researchers and growers better understand how to prevent them.

He is eager to bridge the gap between his position as a researcher and as a voice actor. “I’d love to narrate news. If people have a newsletter they’d like to put into a podcast form. I’m all for it,” Bolton said. “If people want to communicate science, I’m ready.”