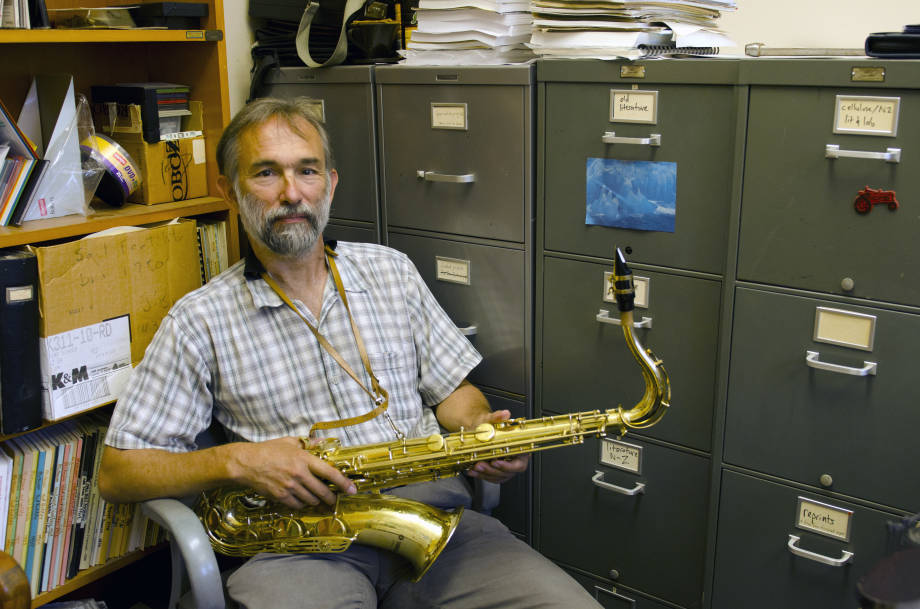 Peter Scharf, a professor in the Division of Plant Sciences who specializes in nutrient management, poses with his saxophone.

It all started in a neighborhood park in 2009, when Peter Scharf, a nutrient management extension specialist in MU’s Division of Plant Sciences, hopped on stage to perform at an open mic event with another MU faculty member at Rock Quarry Park in Columbia.

The following year, a guitarist joined them, and this time they invited the entire neighborhood to participate in “Quarry-oake.” The trio invited their friends to sing along to any of the 50 songs to which they had learned the backing instrumentation. The event went on for hours, until the park closed for the evening.

During the day, it’s a toss-up whether you will find Scharf in his office on MU’s campus, or in the field, explaining or studying new nutrient management techniques. As a nutrient specialist, Scharf helps communicate new materials and methods learned from research to the farmers and growers whom can implement them. He specializes in fertilizer and nutrient management and erosion prevention techniques. Scharf studies these techniques at the College of Agriculture Food and Natural Resources‘ Bradford Research Center. He also teaches a graduate seminar to improve students’ public speaking skills.

‘In the middle space’ 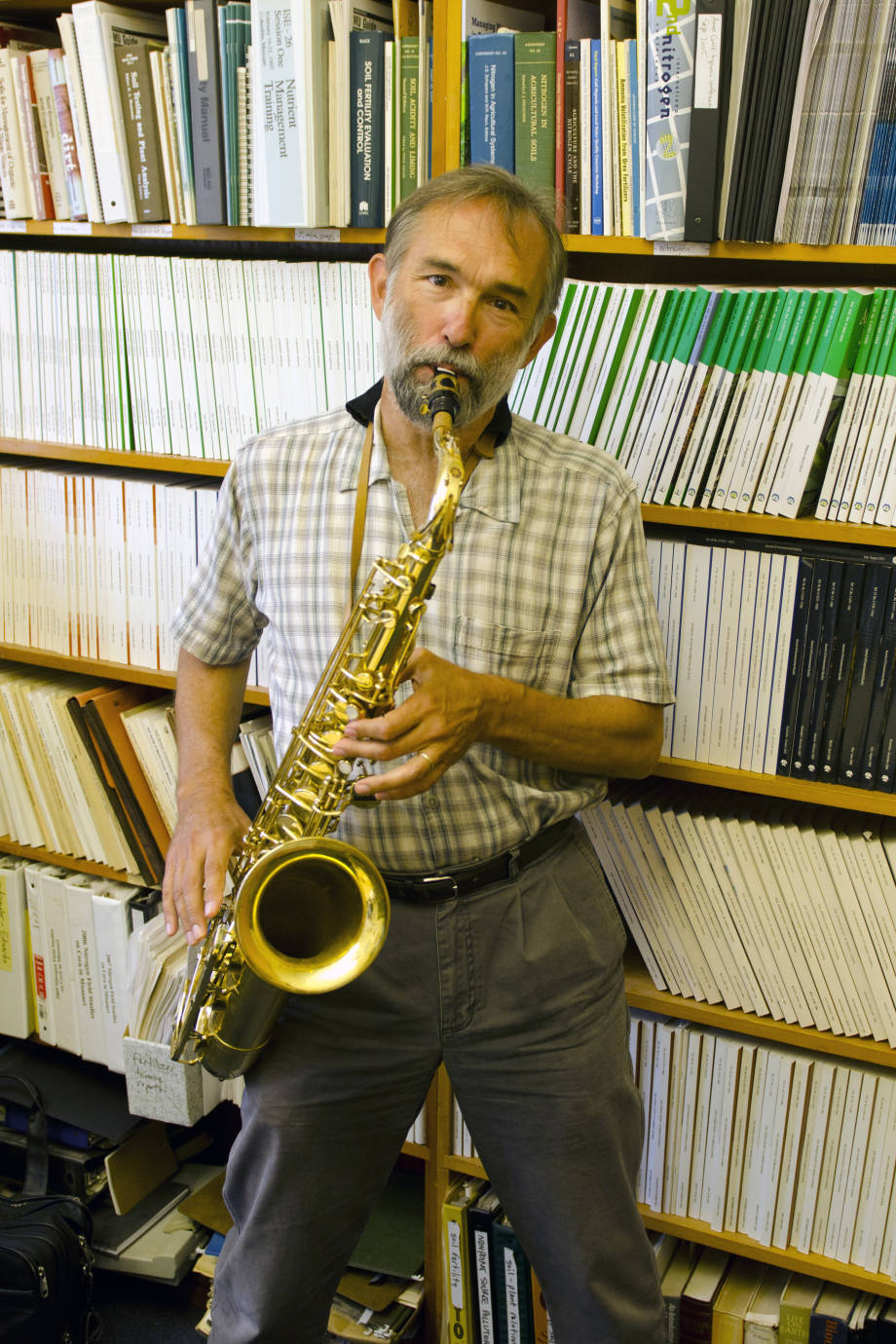 Peter Scharf plays both saxophone , flute and even percussion for a band called the Hellbenders.

Scharf has been playing with the Hellbenders since the band formed. He plays saxophone, flute, and on some occasions he sings and plays percussion. The band is almost entirely made up of MU faculty members, including professors from the English, biology, and psychology departments. Each semester, the group picks a weeknight to get together and play.

The Hellbenders play a mix of almost every genre on the map. There are influenced of pop, folk, rock, rhythm and blues and even reggae. “It’s kind of in the middle space,” Scharf said. “I mean the guy who wrote the song that I say the reggae is in — he claims it’s not, but it is,” he said with a laugh.

The group went on hiatus last year, as its guitar player went away on sabbatical. The Hellbenders now have regrouped and began practicing again in September. Now, the group is working on creating goals. Scharf said they will either begin focusing on another public appearance, or they will begin creating a second album. They completed their first album around 2011.

“When we play in the basement together… We’re doing it with something in mind. We’re having fun but we’re also trying to work toward a particular goal,” he said.

Much like the Ozark salamander they are named for, the band only makes a handful of public appearances. They perform two or three times a year in the Columbia area. They have performed at the Columbia Area Earth Day Celebration twice. Occasionally, the Hellbenders can also be found on the bill at local haunts like the Bridge and Rose Music Hall in downtown Columbia.

“There’s a little bit of an edge, getting on stage. A bit of heightened awareness that people are watching you and you have to truly pay attention and really focus to do the music well,” he said. It’s best when the audience really reacts to the music. Scharf said this creates energy between the crowd and the performers. “It’s supposed to be an interaction… If there’s a performance that I’ve really enjoyed, it’s because there’s an interaction between the audience and the band, and the more active that interaction is, the more fun I’m going to have.” Scharf said he likes small stages. He likes to be close to the audience.

This is something that applies to his work as an extension specialist as well. “I’m the same way when I’m giving extension presentations. I never stand behind the podium,” he said. “I get close to the audience, so they feel I’m there to talk to them. I want them to ask me things or tell me things when I’m presenting.”

For Scharf, music has been a way of life. In his family, it was not a matter of if they would play an instrument, but when. “I get joy from it. It’s expressive. It’s freeing in a way. A lot of possibilities are opened up both as a listener or a performer… That’s the best I can explain it I think.”