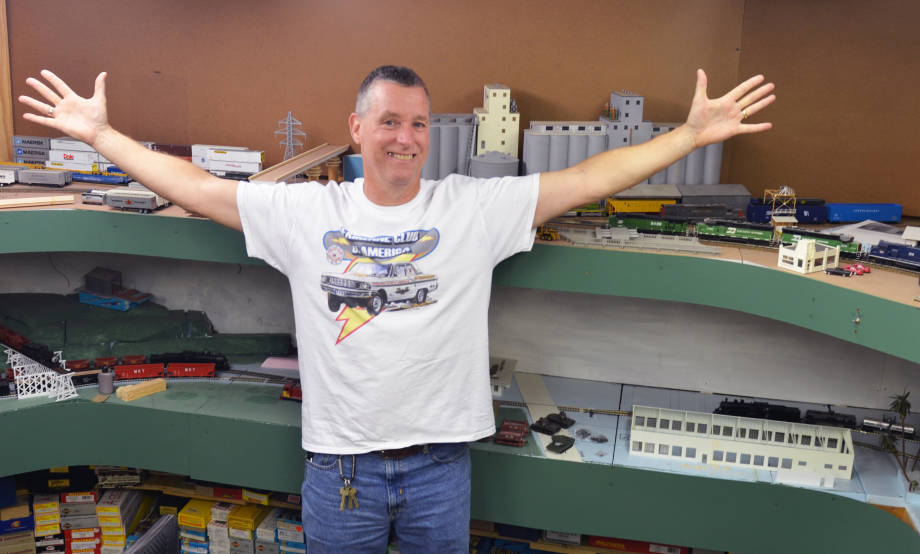 I’m growing older but not up
My metabolic rate is pleasantly stuck
So let the winds of change blow over my head
I’d rather die while I’m living than live while I’m dead.

These words form the chorus of one of Jim Reese’s favorite songs, “Growing Older But Not Up,” by Jimmy Buffett.

More than a catchy song of an artist who he has seen in concert 21 times, they have become the mantra for man who has no intention of losing his eclectic, child-like wonder for all things with a motor as his 60th birthday stands eight months away. 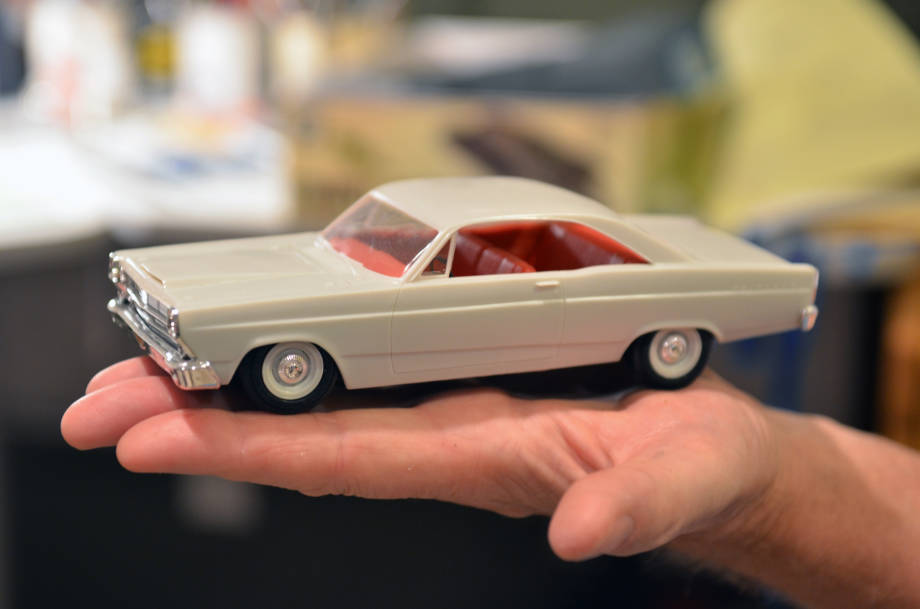 Reese talks about the song while standing in the middle of a double-decked miniature train realm, complete with train cars of every variety and even a large factory that he made using parts from other plastic models.

“This is my world!” he exclaims with his hands outstretched.

You can go ahead and call him a big kid. He does not mind.

“I think it’s a compliment,” he says.

Reese, who works as a senior multimedia specialist for CAFNR’s Division of Animal Sciences, is a hobby shop’s dream customer. It takes him a while to list his main interests away from the office: vintage car refurbishing, model building, miniature railroad building, book publishing, photography and magazine editing, just to name a few. His hobbies mirror the spacious serpentine basement in his home where each room unveils one more hobby.

“Yeah, I’m kind of all over the place,” Reese admits. “There are hobbies everywhere. It just sort of goes on and on.”

In his father’s footsteps 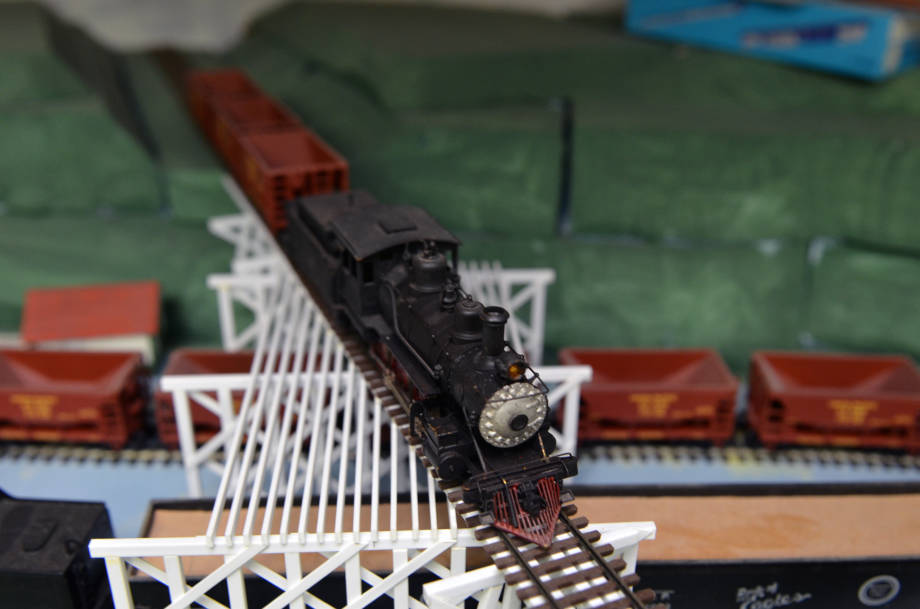 This black locomotive model train was given to Jim Reese from his father, Gerald. It is one of many that Reese owns.

Surrounded by all of his miniature trains, Reese focuses in on a black locomotive that his father, Gerald, had passed down to his son after getting it as a retirement gift from the California State Division of Highways. It was Gerald who had collectively passed along a love for modes of transportation of all kinds. Growing up just southwest of the Los Angeles city limits in the ’50s and ’60s, it’s fair to call Jim a chip off of the old cylinder block.

As a Navy man who served on the U.S.S. California, Gerald first shared his love of ships – in particular battleships – with Jim and his brother before taking them to air shows, train shows and car shows. Eventually his father started compiling a collection of sports cars, including a 1961 Ford Thunderbird, which revved up his love for Fords. Jim became enamored by the Ford Falcon line — which is the predecessor of the more popular Mustang line — and the Fairlane series in particular.

Earlier this year, Reese became the editor of the Fairlaner, a bi-monthly publication that goes out to the 3,000-plus members of the Fairlane Club of America.

He currently owns four classic Ford cars: a 1969 Ford Mustang (sportsroof edition), a ’63 Falcon convertible, a ’65 Ranchero and a ’70 ½ Falcon. Only the Ranchero, which had been his regular ride to campus for years before having some mechanical issues, has found a spot near the garage of his home, where two other newer Mustangs also call home. The rest of the cars are kept at other garages in the mid-Missouri area. 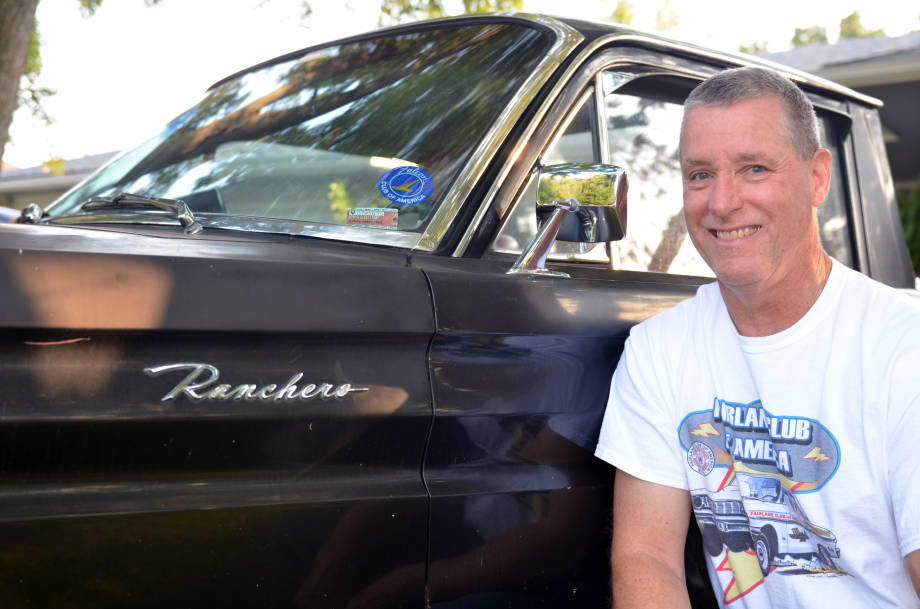 Jim Reese poses next to his one of the four vintage cars that he owns. This one is a 1965 Ford Ranchero.

“We’re at a saturation point right now, so if he wants a new one, one of these has to go,” says his wife, Jean Brueggenjohann, who works as a fine arts professor in MU’s College of Arts and Sciences. “Otherwise we’re going to have them out on the lawn.”

Brueggenjohann adds that she can’t wait to see when his latest project, the ’70 ½ Falcon, is ready to roll.

“I’ve seen pictures of it,” she says. “It’s something I might want to drive to school one day and impress my students with.”

Inside Reese’s garage one will find a scattering of dash plaques and other memorabilia from the various car shows that he’s been to over the years, but none are prominently displayed and some have been tossed. What he keeps with him are the stories that car show patrons share with him.

Like his list of hobbies, the amount of various jobs he has had and places he’s lived is quite extensive. While living in Arlington, Va., in the early ’80s, Jim met Jean, a college professor at Boston University, at a mutual friend’s beach house in Nag’s Head, N.C. The friend thought the two would be perfect for each other, and conveniently forgot to mention that the other person would be there for the weekend. In Jean, Jim found someone who shared even more of his art-centered interests, including those of graphic design, and a fondness for mid-century furniture (post-World War II to the early ’60s). 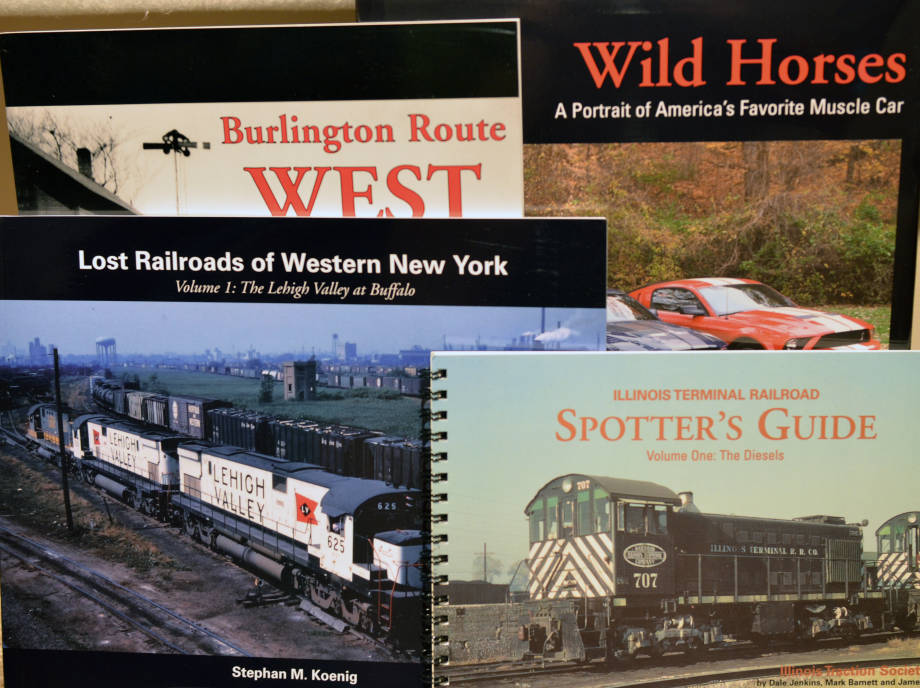 In the mid ’80s, the two moved back to the L.A. area, where Jim did everything from running a print shop to a publishing company — all while photographing trains and railroads, another love he picked up from his father. He would go on to publish approximately 70 coffee table books devoted to trains and railroads, as well as write a few with the help of his wife. He estimates having taken 5,000 to 6,000 railroad slides.

After 11 years in Southern California, Jim and Jean realized that they wanted to find a better place to raise their two children, Hannah and Carson. Jean, who is a native of Hermann (Mo.), found a job opening at MU. They landed in Columbia at the same house they’ve called home for 20 years. Reese first worked for CAFNR from 1997 to 2006 in the Agricultural Engineering Building before returning to the MU campus in 2012 in his current role after working at KOMU from 2006 to 2009.

Next to a large bookshelf filled with railroad books that he either published or wrote sits a gargantuan Handi-Quilter long-arm sewing machine that “floats” as it works on large quilts.

“That’s our next adventure,” Jim says. “You sort of dance along behind it and do some quilting.”

Probably with some Jimmy Buffett on in the background.