Palmer amaranth is extremely competitive and can cause major… Expand ▸

Palmer amaranth, one of the most aggressive pigweed species, is native to the desert regions of the southwestern United States and northern Mexico.

So why is the weed randomly showing up more and more in Missouri and throughout the United States, even as far north as Michigan?

It’s a question that Kevin Bradley, associate professor of plant sciences, was interested in finding an answer to.

Palmer amaranth is a summer annual broadleaf weed and is closely related to waterhemp, which is currently the most common and troublesome weed found in Missouri. 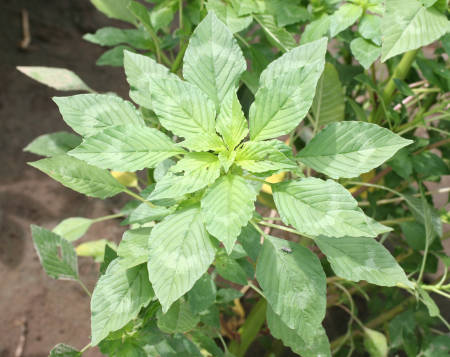 Palmer amaranth is one of the most aggressive pigweed species. Photo courtesy of Kevin Bradley.

Palmer amaranth is extremely competitive and can cause major yield losses if it finds its way into field crops. It is also showing resistance to glyphosate and the Group 2 and 14 herbicide families.

“Most farmers aren’t concerned with a weed that has never been on their property,” Bradley said. “However, this weed can spread into our area, and it can cause major yield losses in either corn or soybeans.”

Palmer amaranth can spread in a number of ways, the most common of which is in feed or hay transported from the south. Bradley said he has also seen the seed carried with farm equipment, bought from the south, which was not adequately cleaned.

Bradley tracks where Palmer amaranth shows up and was surprised by some of his findings.

“We were tracking Palmer amaranth distribution in Missouri around four or five years ago,” Bradley said. “We noticed that we were finding it in the Missouri and Mississippi River bottoms, which really didn’t make much sense. It’s a weed that grows very well in the southern United States, and it didn’t use to be present at all in the northern United States.”

So where else was the weed coming from? Bradley thought waterfowl could be the answer, and he asked graduate student Jaime Farmer to see what he could find.

Farmer has a degree in plant science with an emphasis in crop management. He is currently in the crop, soil and pest management graduate program at the University of Missouri.

Farmer began the research last fall. The first step in starting his research was getting the correct permits. Farmer had to have permits from the Missouri Department of Conservation to collect the waterfowl. Once that step was completed, he had to find the actual waterfowl to study. With the help of Bob Pierce and Lisa Webb in the University of Missouri’s School of Natural Resources and using connections throughout the state, Farmer was able to collect nearly 240 hunter-harvested ducks. He drove all over the state to collect the donated waterfowl carcasses. Farmer couldn’t house all of the ducks either, so several volunteers froze and kept the ducks for him to pick up at a later date. 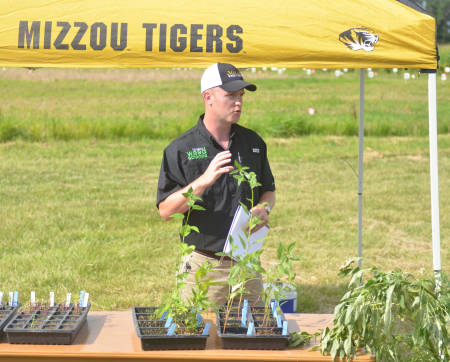 “It was a lot of time and it wasn’t the most pleasant job,” Farmer said.

Once the seed was removed from each portion of the digestive tract, including the esophagus, gizzard and intestines, Farmer planted the seed in the greenhouse. So far, he has identified nearly 50 separate species of plants and more than 15,000 total weed seed that have germinated from his 240 ducks.

“I didn’t think we would find that many,” Farmer said. “Some of the esophagi we found contained 230 to 250 grams of plant material.”

The two most common plants found in the waterfowl were barnyard grass and smartweed, neither of which were too surprising considering those are species planted for waterfowl habitat. The third most common plant, waterhemp, was a bit of a surprise but backed up Bradley’s initial thoughts – that waterfowl do transport pigweed seed throughout Missouri. The predominant pigweed found so far has been waterhemp, but given the similarity between waterhemp and Palmer amaranth, Bradley and Farmer suspect that Palmer amaranth is being transported in this manner as well.

Farmer’s initial research has proved that waterfowl are carrying large amounts of pigweed seed across Missouri. He also found that his hunter-harvested ducks ate more weeds than anticipated.

These initial results have led to a secondary research project. 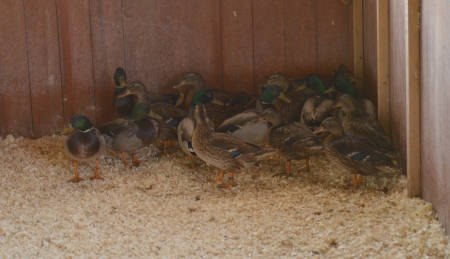 Farmer is currently precision feeding live ducks to determine the viability of 16 different weed seeds after digestion and passage through ducks, and also to determine how long it takes for these weed seeds to pass through the ducks.

“We’re precision feeding a known quantity of seed,” he said. “We’ve tried to eliminate all other variables. All of the meal sizes are the same. We’re monitoring them for a 48-hour period. Every four hours, we collect their feces. Once we get the repetitions done, we’ll be able to determine the number of intact seeds that we find. That will give us a recovery rate.”

Farmer will then test the viability of that seed to see how much of it actually grows. Factoring in flight patterns and how long waterfowl fly each day, the research could give very specific results as to where and when waterfowl spread Palmer amaranth.

Farmer currently has 115 hunter-donated snow geese from the 2014-15 season that have been dissected and their digestive system contents have been planted. His process will be the same as with the waterfowl. The ducks that he studied were traveling from the north to the south but the geese that were harvested were traveling from the south to the north. Farmer said he’s interested to see if there will be any differences between the weed seeds transported by geese compared to ducks.

“We’re curious to see if our prediction is accurate again,” he said. “Geese spend more time in fields and ducks are found in the water more. Maybe the geese are more selective eaters. Those are the type of things we’re trying to find out.”

While there is no way to stop waterfowl from eating pigweeds like waterhemp and Palmer amaranth, the research shows that these weeds can be spread through these migratory birds.

“It’s a significant finding,” Bradley said. “And it’s really eye-opening. It helps us to know where to be looking for this weed first. We definitely need to keep an eye on it.”