A young deer is found wearing a GPS collar. The animal is… Expand ▸

To everyday motorists, they might be a potential calamity on a curvy road late at night. To hunters, they might represent an opportunity for a victorious weekend morning.

To certain individuals at the Department of Fisheries and Wildlife Sciences and the Missouri Department of Conservation, though, white-tailed deer are the reason behind an extensive five-year undertaking to study the survival, reproduction and movement patterns of a dynamic mammal that affects nearly everyone in Missouri in one way or another. The findings will be applied to future deer population models, disease management protocols and localized deer management practices.

“It’s a proactive approach to manage the deer herd more effectively that will benefit all Missourians,” said Jon McRoberts, a postdoctoral research associate who is helping oversee the project. “The project is not something that’s being done for a select group. If it can be managed to effectively reflect what people want and what’s environmentally sound, then it’s going to be a good situation for everybody… It just allows for a more complete understanding of what might happen.” 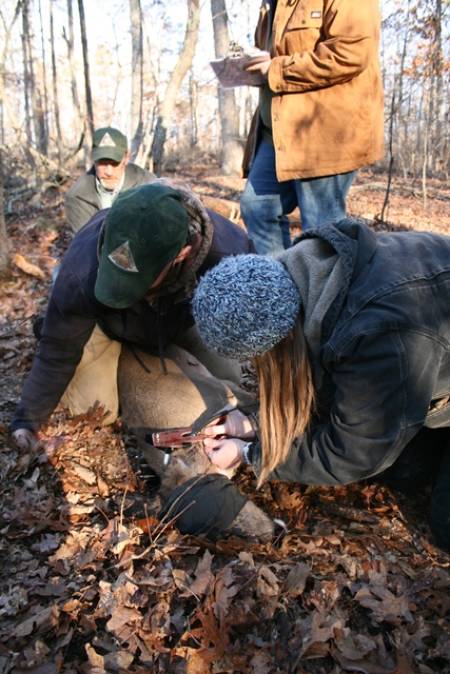 Starting this past January, a team led by McRoberts, graduate student Chloe Wright, and MDC deer biologist Emily Flinn, has been conducting research by collaring and tracking both male and female deer of all ages in two four-county areas in the northern glaciated plains in the northwest (Andrew, DeKalb, Gentry and Nodaway counties) and the in the Ozarks in the south-central (Douglas, Howell, Texas and Wright).

It should be noted that 100 percent of the land in the northwest and close to 95 percent in the south-central being used for the study is privately owned. “Without that private land cooperation, we wouldn’t be able to do this study,” McRoberts said of the partnerships his team has formed with farmers and landowners.

“I just wanted to know how the deer population was in our area,” said Ernie Ehlers, a participating farmer who owns approximately 1,100 acres in western Texas County and a smaller portion in Wright County. “I was glad to let them try to track deer on our farm.”

Ehlers, who is a member of the CAFNR Leadership Society after graduating from the college in 1987, said that based on his observations, he would classify the deer population on his land as being “good.” “We’re not overrun, but we’re not scarce either,” said Ehlers, whose wife, Kim, graduated from CAFNR in 1986 and whose daughter Erin is a senior majoring in biochemistry.

With the help of a crew of four people in both sectors (including Vance Vanderweken as the crew leader in the northwest and Billy Dooling as the crew leader in the south-central), the group was able to capture using rocket nets and Clover traps, fit with a GPS collar and release a total of 100 deer (both does, yearling males and adult males) from just after the end of the hunting season in mid-January to March.

The group went on to go through the same process with a total of 56 fawns from May to June. The sample of collared deer will be annually replenished to make up for natural and hunting mortalities.

With hunting season starting back up on Sept. 15, McRoberts and Flinn both emphasized that hunters should not let whether a deer has a collar on it to affect their actions. 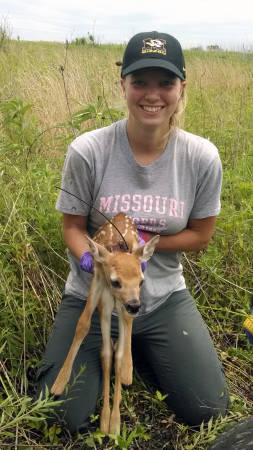 “It reflects what’s happening in a population and that’s what we want,” Flinn said of the study. “We want our hunters to act as they normally would so that our harvest rates are similar to what is on the landscape.”

“The response that we would hope for is that the hunter pretends that the collar isn’t even there,” added McRoberts.

If a hunter does harvest a marked deer, he or she is asked to contact the number on the collar or tag as soon possible.

Although it is hard to pin down an exact number of the total amount of white-tailed deer in the state, Flinn estimates that amount to be somewhere between one to 1.4 million. With such high numbers, it may be hard to fathom that the state was down to about 400 deer in the early 1900s, according to Flinn.

After that point, the population began to grow, up until the early 2000s when in some areas the amount of deer reached a “socially unacceptable” level to Missourians, leading to temporarily liberalized hunting regulations to keep the population in check. A series of outbreaks of various hemorrhagic disease outbreaks, such as epizootic hemorrhagic disease (EHD) and the bluetongue virus (BTV), helped with stabilization as well.

A similar study was conducted in the late ’80s and early ’90s — albeit with very high frequency (VHF) equipment that is far less accurate than the GPS collars that are now being used and monitored on a daily basis by McRoberts and other crew members.

“We use that data from the late ’80s, early ’90s in our population models, yet we know that that information is likely not reflective of the current conditions due to changes in the deer population,” Flinn said. “We’ve grown substantially since then, but the population has essentially stabilized, so we know that influences what we’re looking at.”

McRoberts said that although the GPS technology that the tracking system the team uses has been around for about a decade, its current form of lighter weight usability only came into the market a few years ago. 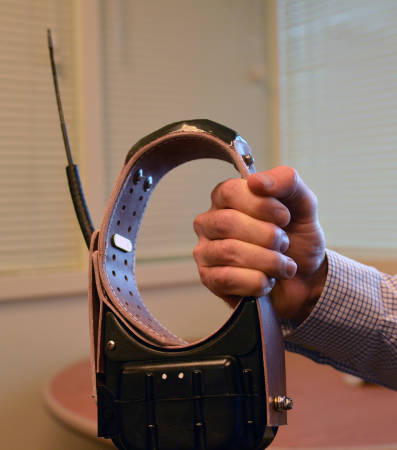 “For the work we’re trying to do, it’s pretty revolutionary. It’s a game changer with the quality of data that we receive with these collars,” McRoberts said recently at his desk while looking at the movements of a young male deer in Gentry County.

The collar, which weighs a scant 825 grams (1.8 pounds), records the coordinates of the animal every five hours. Each recording is marked on his computer screen as a brown dot, allowing him to easily see that this particular deer has traveled approximately 18.5 kilometers (11.5 miles) since being tagged in January. By zooming in, McRoberts can also see that the specimen has been fond of traveling up a down a certain timberline that is surrounded by farmland. “It’s pretty amazing how far he’s moving,” McRoberts said.

It wasn’t that long ago that McRoberts did his research as a graduate student at Texas Tech University using the less reliable methods of compass bearings and VHF equipment, waiting outside for the strongest signal beep of an antenna.

“Using the past VHF methods we wouldn’t be able to locate this deer,” he said. “With this, I can sit here and drink coffee and know exactly where this animal is going with a much, much higher degree of accuracy.” 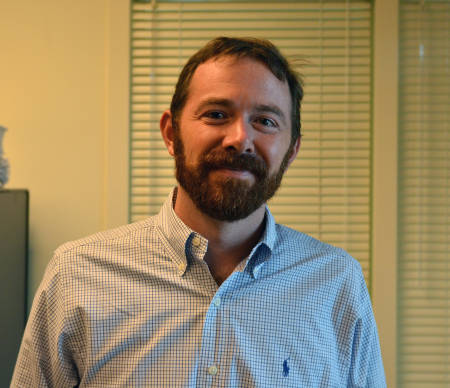 After earning his undergraduate degree from the College of Agriculture, Food and Natural Resources in 2005, McRoberts returned to Columbia a week after defending his doctorate dissertation at Texas Tech  in August 2014 to help oversee the project.

The opportunity to work with deer in his home state and be reunited with Josh Millspaugh — one of his favorite professors at MU who is now the interim director of the School of Natural Resources in addition to serving as the Pauline O’Connor Distinguished Professor of Wildlife Management — made this a position he had to take.

The project is being 75 percent funded by the Wildlife & Sport Fish Restoration Program, in which  federal excise taxes are charged on hunting and sporting equipment.

Although the project has required a significant amount of time waiting in freezing temperatures and living in the cozy confines of a field house for extended periods of time, those involved in the project cannot imagine spending their time doing something else.

“You don’t have a normal day,” McRoberts said. “It keeps things exciting. I have not found myself bored with this work since I started.”

“How many people get their hands on live deer? That’s pretty special and unique,” Flinn added.

“And it’s something different every single day,” Wright said. “Sometimes that is frustrating, but mostly it’s fun.”