Kim Martin didn’t know what to expect when she started developing a floral design program for the University of Missouri College of Agriculture, Food and Natural Resources’ Division of Plant Sciences.

She just knew that she wanted to provide her students a pathway to internships and jobs.

That desire led her to the American Institute of Floral Designers.

“I kind of dove in headfirst,” said Martin, inaugural advisor of the Mizzou chapter. “I knew nothing about AIFD. I read about it in publications and online. I knew it was the leading floral affiliation in the world and had several student groups affiliated with it – I just didn’t know anyone involved with it or any AIFD members.” 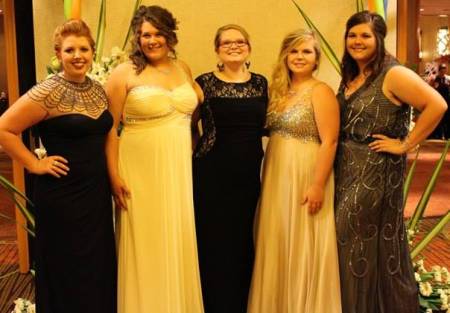 Martin and a student went to the AIFD Symposium in 2012 to drink in as much information as possible. They came back and started working right away on creating a chapter at the University of Missouri. At the 2013 symposium, the Mizzou Student American Institute of Floral Designers Chapter became a reality.

In just three short years, the Mizzou SAIFD Chapter has seen significant growth. The organization had only seven members when it first started and is now up to 15.

That experience has led to recent accolades as well. The Mizzou SAIFD took four students to the 2015 AIFD Symposium, with all four earning top 10 finishes in at least one category during the competition portion of the event. They even had a first place finish – senior Hanna Souther in Arrangement Design.

Those top finishes also led to a third place finish as a team.

Not bad for an organization just three years young.

Forming a SAIFD chapter can be a tough process. There are currently only 15 chapters – one in Canada and 14 spread throughout the United States. A SAIFD chapter can only exist if there is a floral design program in place. Once that program is a go, the chapter must have an advisor.

Funding is also an issue. Attending symposium each year is not cheap.

“There were some rough times in the beginning,” Martin said. “It was a lot of work. We had to do a lot of fundraising. Symposium is expensive and it was hard to find students dedicated to the amount of work it took. I found myself dedicating a lot of time and there were moments that I wanted to give up on it.”

Once the group got to the 2013 AIFD Symposium, the competition portion of the event opened their eyes in another way.

“I will just say it was a learning experience,” Martin said. “We didn’t practice enough and overall did not place well, although we did have one student place in the top 10 of one arrangement.”

The Mizzou SAIFD did receive some good news during the 2013 symposium. Martin passed the hands-on portion of the AIFD’s Professional Floral Design Evaluation, becoming an accredited member of AIFD. She earned her Certified Floral Designer title in 2012.

The Mizzou SAIFD took eight students to the 2014 AIFD Symposium – the most a university can take to the weeklong event.

Lesleighan Kraft said that fundraising is always a challenge – but it was really tough that second year. Kraft, who has been with the Mizzou chapter since it began, said with so many individuals attending the symposium it was a task to raise funds.

“Finding the funding was the toughest part early on,” said Kraft, an event assistant with Tiger Garden, MU’s student-run floral shop, and recent graduate of the floral design program. “It costs almost $2,000 to send a student to the symposium.”

Karyn Brooke, a close friend of Martin’s and an AIFD member, made things much smoother in the way of finances.

“Karyn was able to pull through with some big-time sponsors those first couple years and helped us greatly,” Martin said.

Kraft also took on more responsibility during the 2014 AIFD Symposium.

Along with competing, Kraft took on more advisor responsibilities. It was an important experience, as she now serves as an instructor for the Mizzou Chapter.

Martin is still involved with the team. She is currently in Italy with her husband, who is in the military. 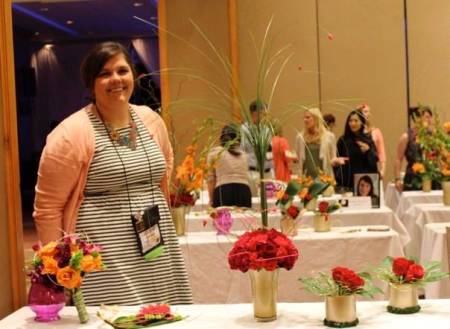 Those finishes led to a third-place team honor. It was a far cry from last year’s event, where the team finished second to last.

“Since we’re such a new chapter, this was really exciting,” Kraft said. “For us to come in and place, I don’t think people knew where we came from.”

There were 14 programs that sent students to this year’s event. Of those that attended, 48 competed in the four categories.

To attend symposium, Mizzou students had to complete 50 hours of outside design time, two practice competitions and attend at least 80 percent of SAIFD functions.

“We don’t want to just throw out the money if you’re not really committed,” Kraft said.

The rest of the week was full of volunteer work, traveling to floral design shops, listening to speakers and partaking in hands-on work.

“There are hundreds of opportunities to volunteer,” Kraft said. “We try to make those connections during those volunteer opportunities.”

Focused on the Future

The Mizzou SAIFD Chapter has plenty in store for the upcoming year as well. Along with normal practices, the team works with several high schools. They will go in and speak at schools, doing presentations on what can be done with floral design. They also work with FFA chapters.

“There is a lot of outreach,” Kraft said. “It’s really exciting.”

In the past, the chapter has sold bouquets at graduation and sold wreaths at other functions. They’ve worked with master gardeners as well.

Sometimes they just open a magazine and study a certain arrangement.

“We’ll pull pictures out of magazines and dissect them,” Kraft said. “We go on as many trips as we can afford, just so we can see how other places do things.

Kraft said they are also always on the lookout for materials that they can use, especially flowers. The team does mostly fresh arrangements during practice. If you would like to help out, contact Kraft at lk4zc@mail.missouri.edu.

“I love keeping up with what all the students are doing,” Martin said. “Working with students is so inspiring. There is so much growth in the four or so years they are part of our program. I think this is only the beginning for the SAIFD group. As we continue to do better at the national level, we will meet more people and have more opportunities.”