Lisa Webb has been a competitive cyclist for five years. She… Expand ▸

It’s attention-grabbing. It’s out of the ordinary. And as Lisa Webb will tell you, the souped up “speaker bike” that normally rests in the middle of her garage is fully functional in spite of its front-heavy appearance. 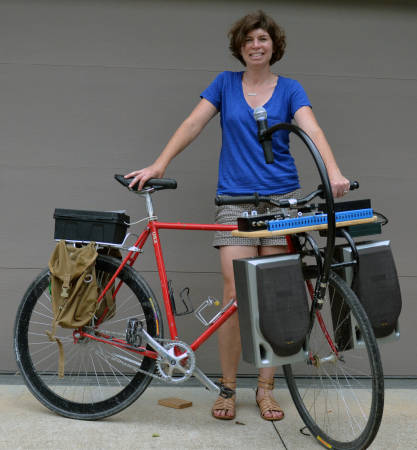 The red Trek road bike sports twin speakers, a karaoke system, an iPod station and a microphone stand – among other wires and other rigged-up electrical items.

Webb’s husband, Keith, first attached the speakers and sound system in 2012. The bike quickly became a hit among social and group rides in Columbia, which tend to be rolling parties themselves. “We noticed a lot of people singing along,” Lisa says.

The karaoke equipment was added the following year, allowing the cooperative assistant professor in the department of fisheries and wildlife to belt out her go-to song (Kenny Rogers’ classic “The Gambler”) when the time is right.

To say that Lisa Webb is a cycling enthusiast is putting it mildly. Regardless of the weather, she tries two to three times a week to take the five-mile bike commute from her house (by design, she lives a short ride from the MKT Trail) to the Anheuser-Busch Natural Resources Building, where she has specialized in waterfowl and wetland ecology as part of the USGS Missouri Cooperative Fish and Wildlife Research Unit Faculty for the past four years.

She recently returned from a trip to the Hudson Bay to help the Canadian Wildlife Service round up and place bands on the legs of Canada geese to help monitor the birds’ population before they migrate south. 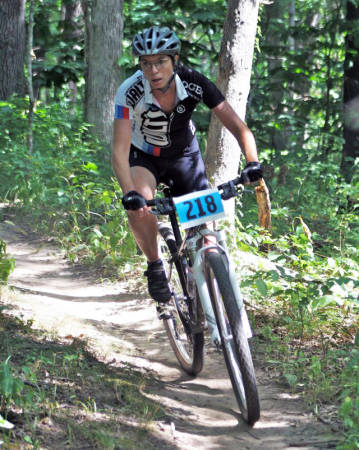 The speaker bike is one of 15 bikes that she and her husband collectively own. She takes some of those bikes to about 10 races in a given year as a member of the Walt’s/Logboat Race Team since beginning to bike competitively about five years ago. During her career, she has about 10 top-3 finishes – and has won a few races as well.

Growing up near the Canadian border in the Thousand Islands region of Upstate New York, Lisa’s first bike was a Schwinn complete with a banana seat and streamers she received as an explorative 5-year-old. “The freedom,” Webb says of why she was drawn to cycling. “It lets you go where you want to go. Growing up in a small town, you could bike anywhere that you needed to.”

Know when to hold ’em

These days she prefers mountain biking over any other discipline, but that was not the case in 2004 when Webb was a doctoral student at Texas Tech University in Lubbock, Texas, looking for a partner in a relay team adventure race that involved running, mountain biking, canoeing and rock climbing. She needed a mountain biker, so she asked two guys she overheard discussing the sport at a local outdoor store if they would be interested. 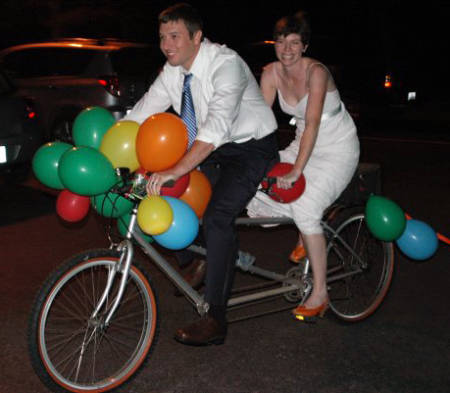 Lisa Webb and her husband, Keith, pedaled away in a tandem bike following their wedding in 2008 in western Arkansas. Photo courtesy of Lisa Webb.

One said yes. Keith. That Keith. “And we want on to win the race,” Lisa says.

He would later go on to teach her how to mountain bike, so when they were married four years later it was only fitting that their “Just Married” getaway vehicle was a tandem bicycle festooned with bright balloons (see photo).

Keith, who is also an avid biker (“Probably more.”), worked as a bike mechanic while in college, so Lisa has no fear of flat tires or gear issues along their rides.

“I thought it was a probably a good policy if I was going to be into biking, to marry a bike mechanic so I was guaranteed bike maintenance for life,” she says with a laugh.

In addition to competing in races, the Webbs also enjoy incorporating biking into their vacations, such as last year when they took part in a famed ride in Moab, Utah, called the “Whole Enchilada.” It consisted of being shuttled to the point of highest elevation and then going approximately 30 miles down a gradual descent of mostly rocky terrain.

“The views are incredible,” Lisa says. “But you want to make sure that if you fall, you fall in the right direction, away from the 300-foot drop-off.”

We’ll take your word on that. 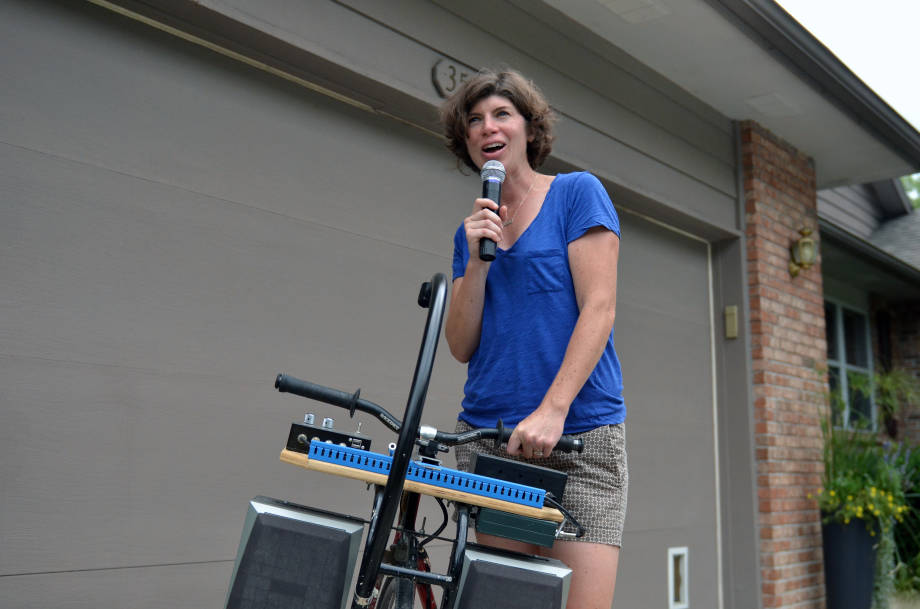 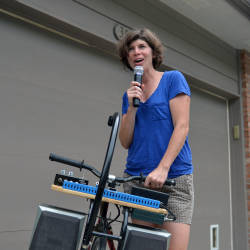 Lisa Webb demonstrates how the "speaker bike" works that her husband built in 2012. Photo by Stephen Schmidt. 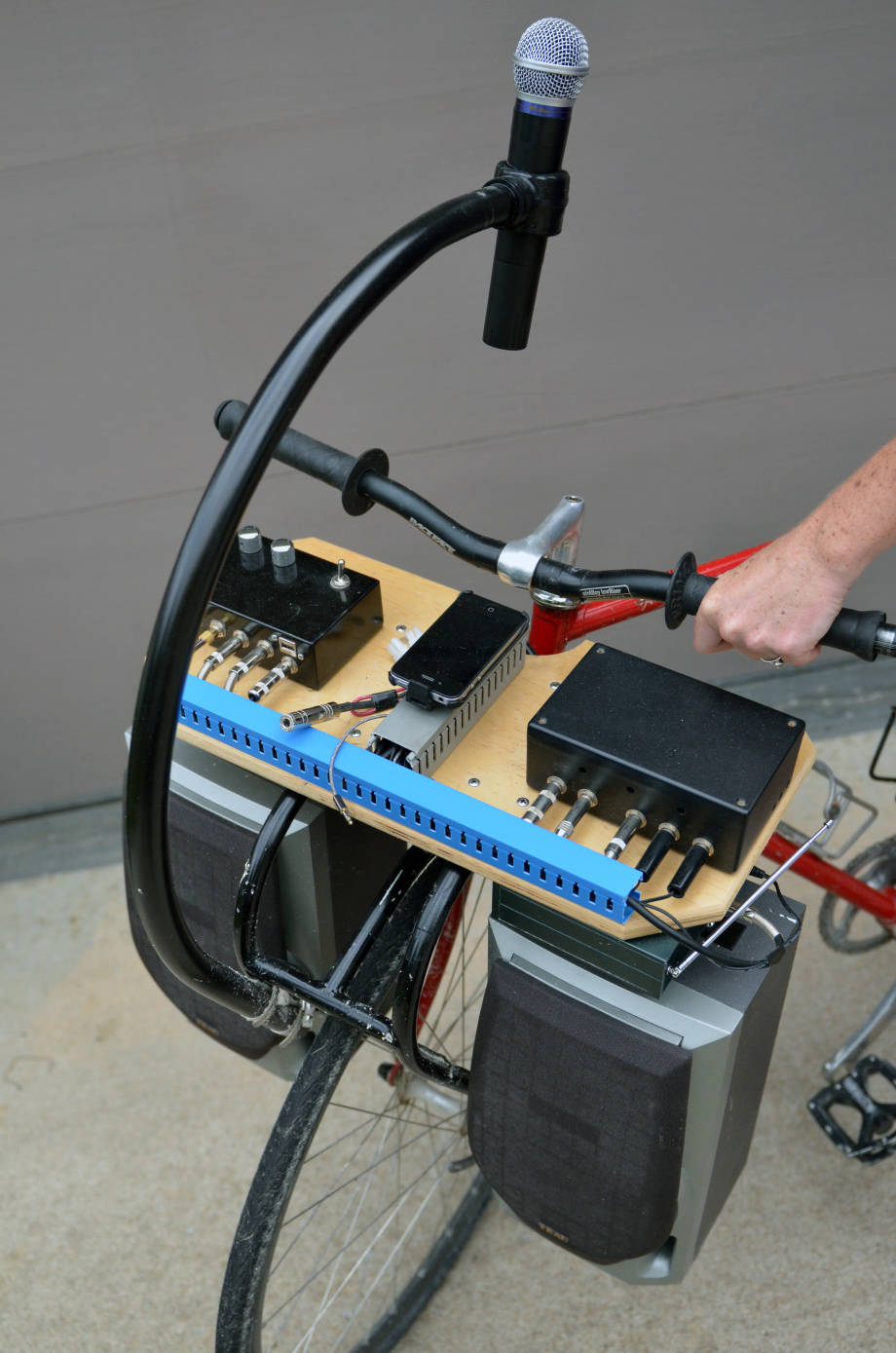 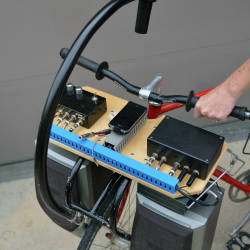 An up-close view of the "speaker bike" reveals a complex system of wires connected a sound system to all of the equipment. Photo by Stephen Schmidt. 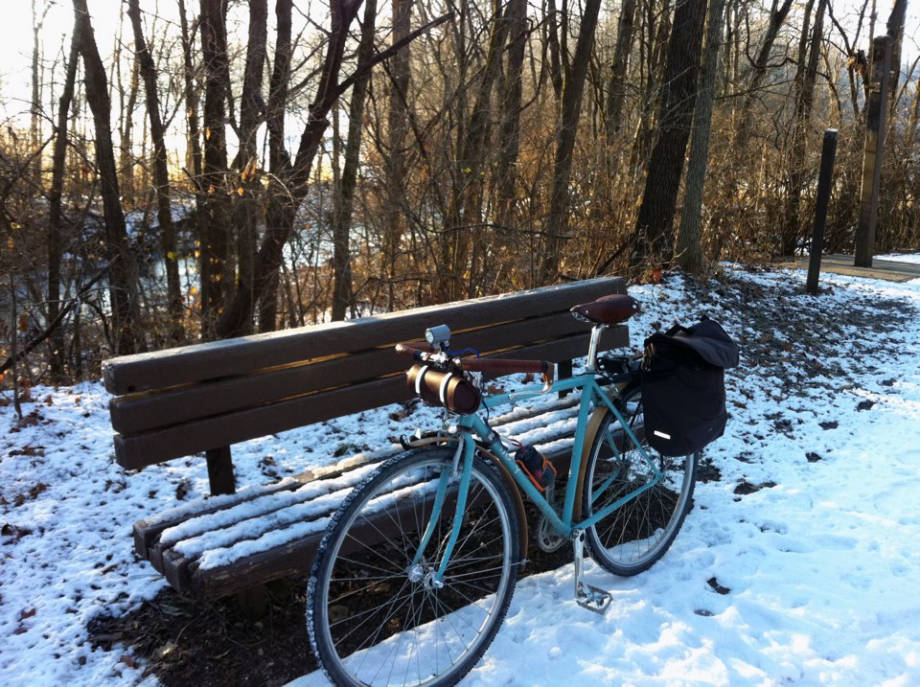 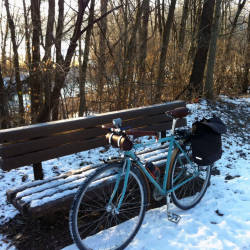 No matter the weather, Lisa Webb normally uses this bike to go from her house to campus. Photo courtesy of this Lisa Webb. 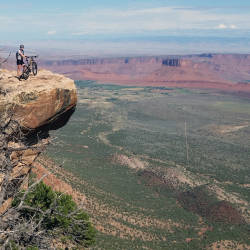 Lisa Webb stands on top of one of the many lookout points along Kokopelli Trail in Moab, Utah, where she and her husband did a significant amount of mountain biking. Photo courtesy of Lisa Webb. 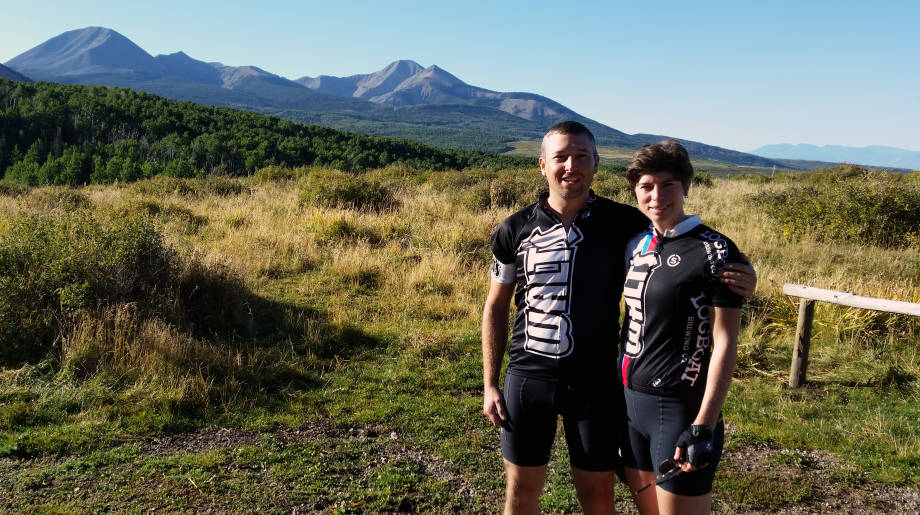 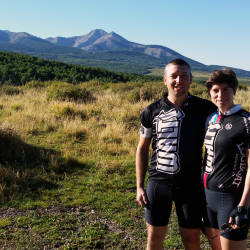 Lisa Webb and her husband, Keith, strike a pose among a mountain range near Moab, Utah. The two are wearing their Walt's Logboat Racing Team uniforms. Photo courtesy of Lisa Webb. 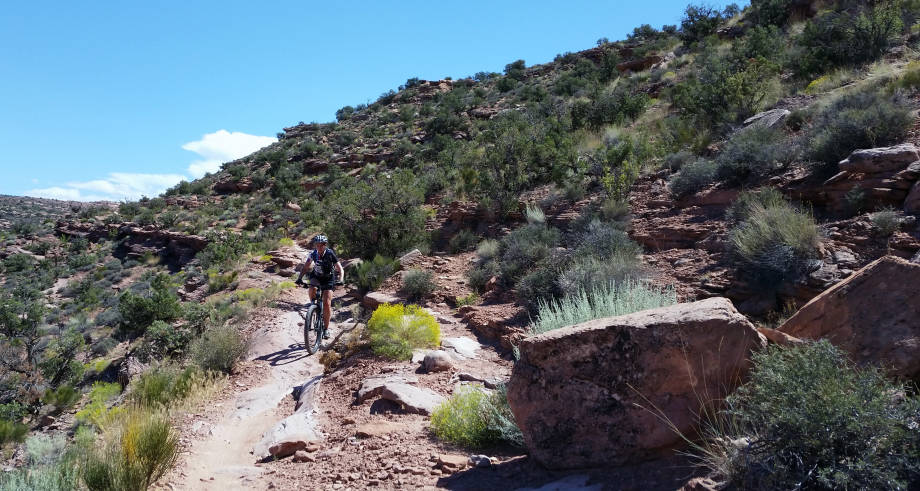 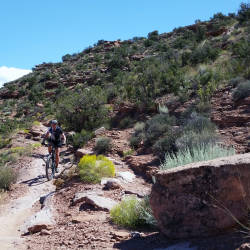 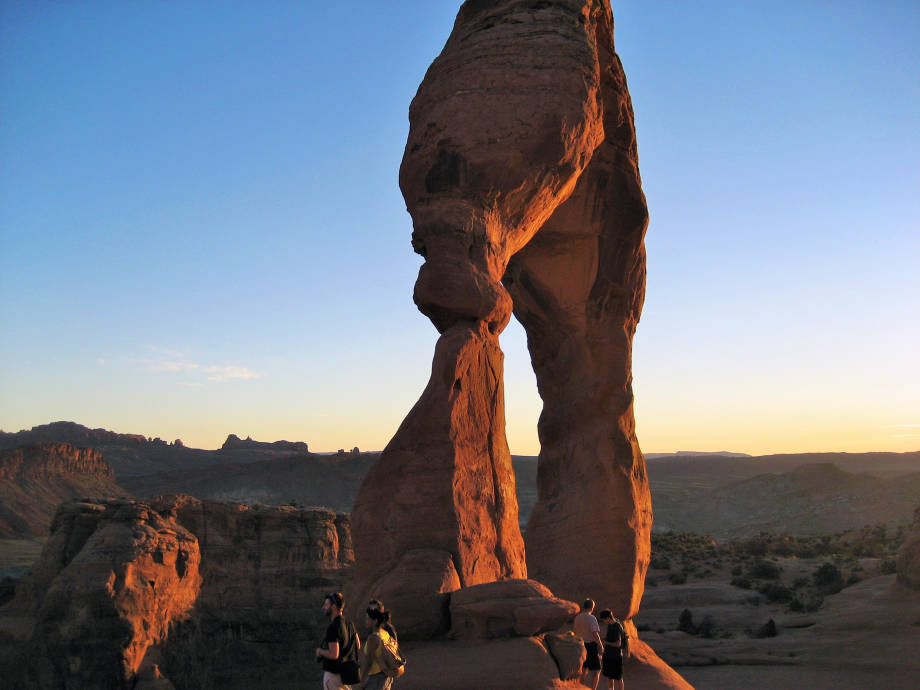 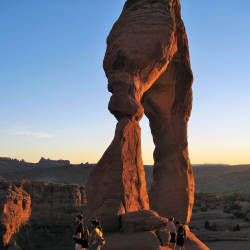 The Delicate Arch at Arches National Park in Moab, Utah, was just many of the sites that Lisa Webb and her husband saw on a trip there last September. Photo courtesy of Lisa Webb. 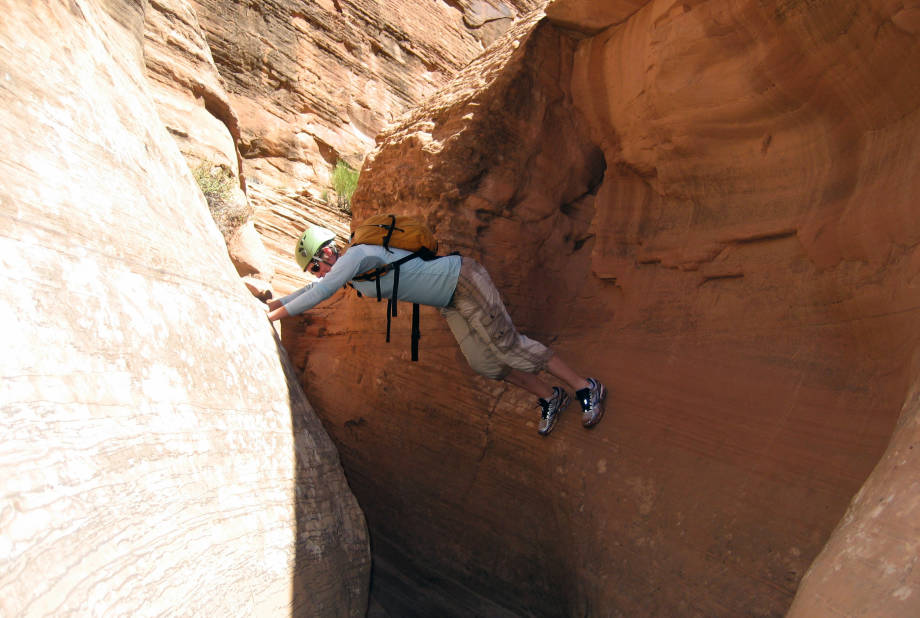 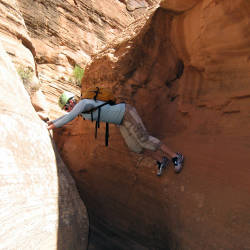 When Lisa Webb and her husband were not mountain biking in Moab, Utah, they were attempting other adventurous activities. In this picture, Lisa is a canyoneering up the side of a rock face. Photo courtesy of Lisa Webb.