They came from as far southeast as the Florida Keys and as far northwest as Fairbanks, Alaska, as a congregation normally separated by physical distance, but united by one growing concern: to find ways to help lessen the effects of climate change upon North American fish and fisheries.

From June 1-5, a diverse collection of 27 fish experts (plus two remote attendees) representing a wide gamut of sectors, including the U.S. Geological Survey (USGS), universities, conversation agencies and state natural resource departments from both the U.S. and Canada converged in Bozeman, Mont., at the Northern Rocky Mountain Science Center for a workshop under the working title of “The Effects of Climate Change on Fish and Fisheries” that was organized in large part to the efforts of two members of the CAFNR community: Craig Paukert and James Whitney. 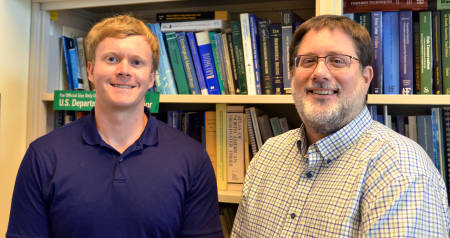 “From an administrative side of things, I think it really shows the link between the academics right here at the University of Missouri as well as other universities to applied research to help states, federal agencies and the nation to deal with this complex issue,” said Paukert, who serves as a cooperative associate professor as part of the USGS Missouri Cooperative Fish and Wildlife Research Unit Faculty.

The results of their discussions and related research conducted in preparation of the workshop, which focused on freshwater and diadromous (those that migrate between freshwater and saltwater), will be published as four papers in a special climate change issue of the peer-reviewed journal Fisheries next spring.

“We wanted to look at documented changes of fish to climate change because there has been a fair amount of research on projected changes,” Paukert said. “We felt that there was at least enough information to start getting at some of those trends now.”

Among the discussion topics at the workshop was the uncertain future of fish that only live in cooler waters, including trout and smallmouth bass, when compared to fish that prefer warmer waters such as catfish, bluegill and largemouth bass. Furthermore, in studies conducted by Paukert and other CAFNR researchers, it was discovered that for every one degree increase in stream temperature, a smallmouth bass had to eat 27 percent more food to grow just 6 percent. Additionally, smallmouth bass that use the coolwater areas near springs may have faster growth.

In addition to the known water factors such as increasing temperatures and decreasing amounts of dissolved oxygen content, many other determinants remain unknown, including invasive species and land-use change. 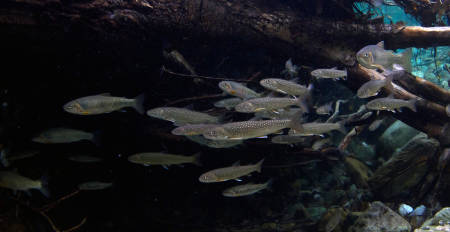 “There are several examples of climate change affecting the fish’s physiology but there’s still so much we don’t know about how that’s happening,” Whitney said. “We really need to do more work looking at how climate change interacts with these other human-caused stressors to affect the physiology of fish.”

Here in Missouri, Paukert said the numerous springs found within the Ozarks add to the complexity of predicting the survival or possible adaptation of certain fish.

Still in spite of all of these challenges, Paukert remains optimistic about what can be done after listening to stories of how several state conservation and natural resources departments have begun to pool their resources and set up collaborative initiatives.

“There’s a lot of partners and partnerships, whether it’s across agencies or even with The Nature Conservancy or other non-government organization that can help,” Paukert said. “We’re all in this together. Especially just like in any other discipline with tight budgets and priority settings, anywhere we can combine our efforts and get more bang for our buck is great.”

Last summer — when the Earth’s temperature would go on to be the warmest on record since 1880 — Paukert was asked by the National Climate Change and Wildlife Science Center to conduct a holistic workshop on all matters relating to climate change and fish, following an initial request from the American Fisheries Society. He had previously served on a committee related to biodiversity and ecosystems as part of the federal National Climate Assessment in 2011.

Paukert hired Whitney to help run the workshop in November 2014. The two then worked with Abigail Lynch at the USGS to compose the list of invitees and to create four subcategories, which are the subjects of each of the published papers: the overall effects of climate change on the physiology and organismal biology of fish, climate change’s effects on fish populations and communities, how to help management agencies make fish more resilient to climate change and the human aspects of climate change, such as recreational fishing.

Over the next several months, Paukert, Whitney, who will be begin teaching at Pittsburg State University in January as an assistant professor in biology, and other members of the USGS will be sharing their findings with presentations at the American Fisheries Society’s annual meeting in August in Portland, Ore., and the North American Wildlife and Natural Resources Conference in March in Pittsburgh, leading up to a possible Capitol Hill briefing on the matter later in the spring.