Forestry student Elizabeth (Lizzy) Wernert describes herself as a tree hugger, but, in fact, she’s the one collecting grateful hugs from the guardians of a historic state cemetery and final resting place for veterans.

The Missouri Veterans Cemetery in Waynesville, Mo., announced in June that Wernert’s landscape design will be used to replace the cemetery’s failed landscaping. The plan extends over 25 developed acres of the 227-acre site located near Fort Leonard Wood, a U.S. Army installation in Missouri Ozark Mountain country.

Implementation of the new design will be done in stages beginning in July with work on landscaping around the Committal Shelter, a structure used for services to honor the veterans or their spouses being interred. That area is often the first impression families have of the facility. 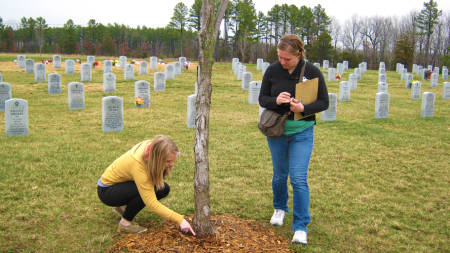 Casey Pearcy (left) and Lizzy Wernert make notes during a visit to the Missouri Veterans Cemetery in March.

After visiting the site in March, six students of Instructor Tim Moloney developed plans and presented their design ideas to cemetery officials in May as part of their Advanced Landscape Design Course. Moloney teaches the senior Capstone Course in the College of Agriculture, Food and Natural Resources’ Division of Plant Sciences.

Selecting a winning design from the six plans was difficult, cemetery Director Charles Baxter says. “The students did a marvelous job. All the ideas submitted had elements that would work wonderfully in the cemetery. Lizzy’s happened to be the one we liked the most.”

Baxter commended Wernert’s plan for her inclusion of plant symbolism and her “special notes,” particularly on maintenance, that helped place her ideas ahead of all others.

Wernert’s detailed instructions on the planting, long-term care and replacement of the trees and shrubs were critically important inclusions. The cemetery has lost 128 trees to dry summers, disease, soil problems and pests – a recipe for landscape failure. Even the surviving trees aren’t thriving in the very thin soil over rock and clay. All the students suggested hauling in soil as the greatest need.

“The students had excellent ideas to enhance the survivability, and we will use their suggestions,” Baxter says.

Wernert expects to tweak her design to include some elements suggested by her classmates: Raschély Flint, Jessica Banuelos, Liz Leingang, Casey Pearcy and Chris Harrington.

Wernert, who is from St. Louis, plans to graduate in December with a degree in urban forestry and begin a career as an arborist and landscape designer. Her studies toward work as a “tree doctor” were an important fit to the cemetery’s needs. She’s working full time this summer with Droege Tree Care in St. Louis.

A design to remember 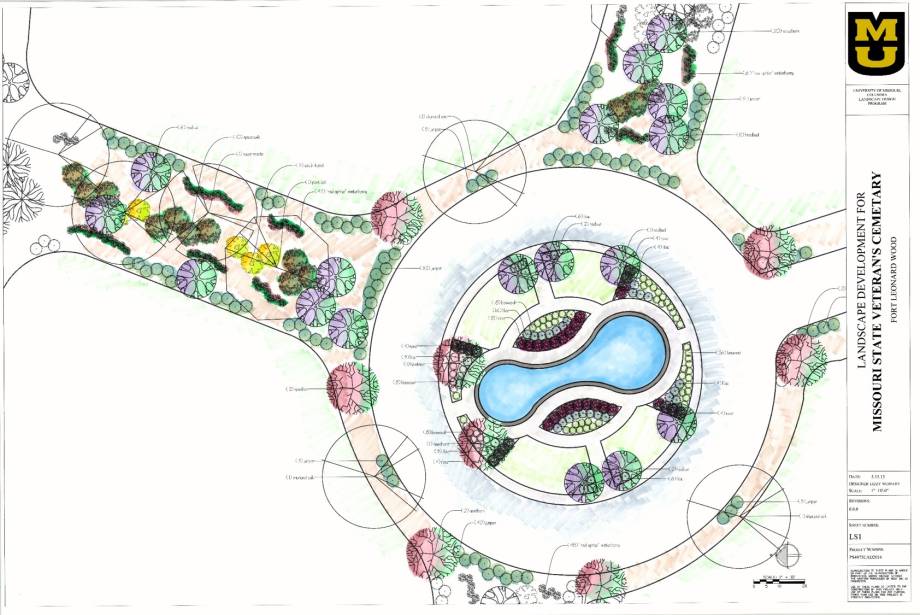 Wernert’s design had to cover 25 acres of the 227-acre site. This drawing incorporates her plans for the memorial fountain feature.

The Missouri Veterans Cemetery is the final resting place for 530 soldiers and their spouses, with an additional 1,300 grave sites preregistered. Baxter expects the 6,917 burial sites in the 25 acres to be occupied in the next 100 years. The site eventually will accommodate tens of thousands of burials.

“The sheer scale of the design was a challenge,” Wernert says.

Before tackling the Capstone project, Moloney’s class had drawn designs that were mostly imaginary front and back yards, so a 25-acre actual site redesign was a whole new level of experience.

To sell their ideas, the students focused on the cemetery’s specific problems and developed workable solutions. They also had to keep the emphasis on focal points and consider ease of care for the five staff members who will implement and maintain the design. Wernert’s designs will allow burial trucks, equipment and mowers multiple access points to the gardens for interment and maintenance. 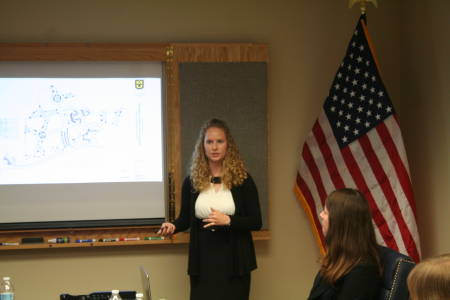 Raschely Flint presents her plan for the site.

“Our guys can learn a lot from the students,” Baxter says of the maintenance instructions.

To help visitors find their loved ones in such a large expanse of land, the cemetery is divided by landscaping into gardens or “rooms.”

Wernert’s tree and shrub placement created a peaceful atmosphere and made clear divisions among the gardens without obscuring the interment gardens. She used native, perennial plants that can survive a sun-soaked, wind-swept terrain yet provide the aesthetic needs for the cemetery. But it was the symbolism in her choice of plants that drew the most attention to her plan.

“I’ve always been fascinated by mythology and folklore. Many people don’t realize that plants have folklore, too. For example, the ancient Celts cut holly branches and hung them in their homes as protection from evil spirits during the winter months, which is the origin of our modern, ‘deck the halls with boughs of holly,’” she says.

Wernert used oak, “our national tree, long associated with strength” and roses, “our national flower,” to symbolize the love veterans have for their country and the love descendants have for the deceased. She also incorporated fringe trees, a “tree of peace and relative of the olive tree,” as well as hawthorn and dogwood, Missouri’s state flower and state tree.

To help mourners feel at home when they visit loved ones, she used native Ozark plants near the graves, but she incorporated a more formal style in areas around the memorials, the entrance and the interment building, reflecting the respect that soldiers deserve.

“It’s hard not to have your heart strings plucked when you’re dealing with a situation like this. This is not a place people go for a picnic. This is a place people go to remember and to pay their final respects to people they loved, to people who gave everything for this nation. So it is a very somber site, but at the same time, it is very alive,” Moloney says. 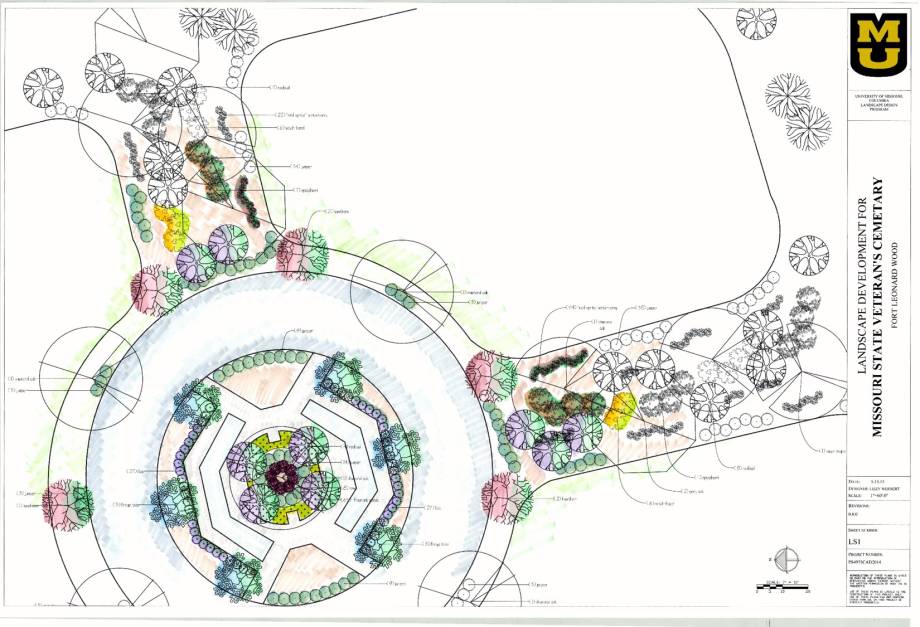 Wernert’s plan had to cover a variety of features. This drawing shows her plan for the Columbarium Wall area of the cemetery.

Baxter appreciates how respectfully Wernert dealt with the cemetery’s main reference points that include the entrance corridor and signage; the Committal Shelter; the Avenue of Flags, a boulevard lined with 20 American flags on poles; the Flag Plaza, where rifle teams and buglers stand to perform taps; the Columbarium Wall, which holds above-ground cremains; and the Memorial Garden, a place of solitude for mourners and visitors.

“This is a final home and forever site, outliving the designer and outliving future generations, so Lizzy is creating a concept now that has to go beyond us,” Moloney says.

Wernert functioned as a problem solver as she created her design. For example, one of the areas she needed to fix is a strip of land between the cemetery’s outer fence and driveway, where erosion has exposed the foundations of the fence and created an unsightly ditch.

“My solution was to plant the slope with aromatic sumac to stop the erosion and conceal the exposed foundations and to pour gravel into the ditch to create a sort of impromptu sidewalk/pull-off parking area,” Wernert says.

Baxter considers it a simple fix that will save hours of maintenance work.

Volunteerism at its finest

The value of Wernert’s landscape redesign reaches beyond the need for a healthier landscape and new look. It has implications for a possible national honor for the cemetery.

Dedicated as one of Missouri’s five veterans’ cemeteries in 2010, the Missouri Veterans Cemetery is newly eligible to apply for the designation of National Shrine, an award from the Department of Veterans Affairs National Cemetery Association.

Such a designation could lead to greater recognition and additional funding for future expansion and beautification, but a major element of consideration for the honor is the appearance of the cemetery.

“This is a very important achievement, and our biggest hurdle currently is our landscaping,” says Louis Colasanti, vice president of the Assistance Association for the Missouri Veterans Cemetery. AAMVC functions as a compassionate support group for veterans and raises funds for cemetery beautification projects.

It was Colasanti who thought of asking Mizzou for help with the landscaping and who contacted Moloney about the redesign.

Colasanti knew the organization could save a great deal of money by using students rather than hiring a professional designer. He figured the students would provide multiple designs with a pool of ideas to choose from instead of a single concept.  And he hoped Moloney would value the volunteer project as a great addition to the students’ portfolios.

“I saw this as a win for the cemetery, the AAMVC, the students and the university as a whole,” he says.

Colasanti has taken the association’s lead role on the project, working with the AAMVC board and president, Virgie Mahan. His main tasks are fundraising and recruiting volunteers to help with the installation, which may lead to another stage of involvement for CAFNR’s plant sciences students.

“Our hope is this becomes a partnership for the future. We can do project management and help with installation. The MU Horticulture Club takes projects, so maybe we can send down a van of students with shovels,” Moloney says.