Ky Pohler, left, and Mike Smith, a professor in the Division… Expand ▸

“Tell me and I forget.
Teach me and I may remember.
Involve me and I learn.”
– Benjamin Franklin

Mike Smith is no stranger to award podiums. During his 35-year tenure in the Division of Animal Sciences of the University of Missouri’s College of Agriculture, Food and Natural Resources, Smith has accumulated a mass of hardware for his achievements in the field of reproductive physiology – but his most recent honor, the L.E. Casida Award, stands out from them all.

At the American Society of Animal Science/American Dairy Science Association Joint Annual Meeting earlier this month in Orlando, Fla., Smith accepted the award, which recognizes excellence in the mentoring of graduate and/or postdoctoral students, while a former graduate student of his, Ky Pohler, received the Agri-King Outstanding Animal Science Graduate Student Award at the same meeting. 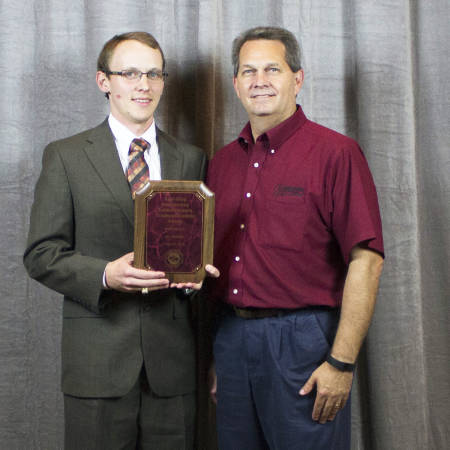 “It was sort of a composite of two awards that really were linked,” Pohler said. “Out of all the awards that I’ve seen Mike get, which is really an extensive list, I could tell that that award meant the most to him, so it was just unique for me to get my award at the same time he was getting his.”

Smith  agreed with his pupil’s assessment. “Training graduate students has been the most enjoyable and rewarding part of my career,” he said. “It’s certainly the most meaningful award I’ve received.”

During his acceptance speech, Smith mentioned his philosophy on graduate education, which really boils down to viewing any students who work with him as partners in research and teaching, who Smith tries to guide along the way.

“The important thing about graduate school, that I like, is that it is very individualized. The students identify a set of goals and then they try to find a mentor who can help them accomplish those goals,” said Smith, noting that the approach stands in contrast to that taken at a professional school.

“I don’t look as grad students as my employees who work for me or anything like that. I feel like we’re working as a team. Ky really embraced that concept. Our personalities were such that we were able to communicate and work really well together.”

Pohler, who began working as assistant professor with an appointment in beef cattle reproduction at the University of Tennessee on June 1, first met Smith in 2009 as he was finishing his undergraduate degree at Texas A&M University. He had asked his advisor, David Forrest, who had been classmates in the master’s program at Texas A&M with Smith, for a list of three names of experts in reproductive physiology to possibly study under in the fall. Smith was at the top of the list.

“It was basically a no-brainer to come there,” Pohler said. “I don’t think I even emailed the other people.” 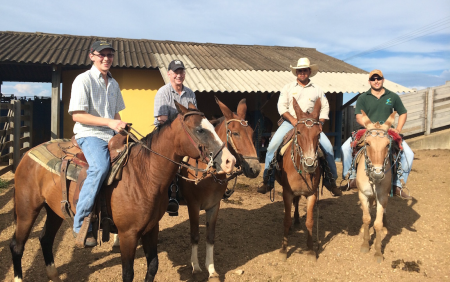 Under Smith’s tutelage from 2009 at the start of the master’s program until finishing his doctoral degree this spring, Pohler authored or co-authored 11 peer-reviewed journal articles, two book chapters and several industry publications. In addition, he conducted research in a variety of locations outside of Missouri.

Those opportunities included a series of trips to Botucatu, Brazil, for work with cattle that would lead to his dissertation topic, which was identifying ways of detecting which cows would lose an embryo and which ones would not. Pohler received the Dorris D. and Christine M. Brown Fellowship in 2011, which lead to the start of the initial projects in Brazil.

Out of all the memories that Pohler has from his time at MU, his fondest was when Smith traveled down to Brazil with him to help him collect data that lead to the research direction he is now pursing further at Tennessee.

“I would say that that the 10 days that we spent together on the farms in Brazil allowed us to realize all of the hard work we had put into starting these projects in Brazil and how much fun we were having in research,” Pohler said. “It really is what lead to me being able to generate an independent program… which then allowed me to transition into a faculty position.”

When he first heard that we would receiving the Casida Award, Smith was surprised, simply because the honor tends to go professors who frequently mentor about twice the number of graduate students that he will during his career. He often only has two or three students working for him at a time to allow more time for personal interaction. 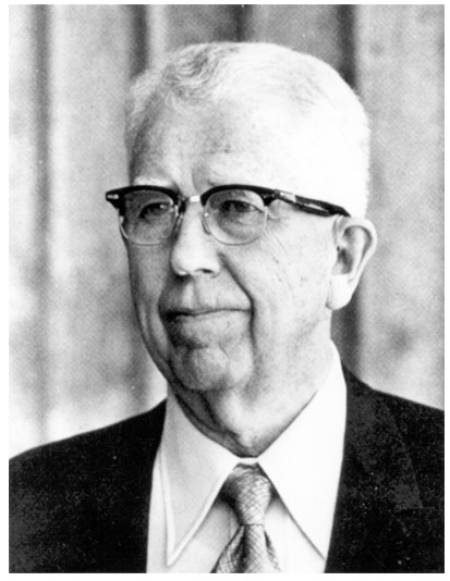 “He understands how to push students in a positive direction,” said Pohler. “I can tell you that I’ve worked with him for a very long time and we never had a negative day together, that’s for sure.”

In addition to the Casida Award being the pinnacle recognition in his field, the award holds special significance to Smith, given his academic background. When he was a graduate student at Texas A&M in the late ’70s, Smith was mentored by Jim Wiltbank, who was mentored by Casida at the University of Wisconsin.

In the summer of 1975 on his way back to Texas A&M for the fall semester, Smith went from his childhood home in a northern Detroit suburb on a decidedly western detour to stop by the agriculture building at the University of Wisconsin on the chance that Casida would be there. As luck would have it, he was. They talked about Smith’s latest research, and later visited at several academic conferences after that before Casida passed away in 1986.

Casida, a native of the small town of Chula, Mo., had gone north to Madison, Wisc., in 1932 to teach at the school after being mentored as a doctorate student at the University of Missouri under Fred McKenzie, who is considered to be the forefather of modern-day reproductive physiology in livestock species. Furthermore, McKenzie was taught by Frederick Mumford, who served as a dean of the College of Agriculture after presiding as the first department chair of the Department of Animal Husbandry (as it was known back then).

“It’s kind of fun to have a scientific pedigree that links me back to Missouri,” Smith said. 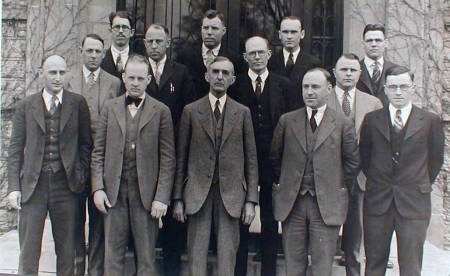 Although Pohler has now made the trip east from Columbia to Knoxville, he still plans on maintaining his own connection to Missouri through a series of collaborative projects with Smith, Jonathan Green, associate professor of reproductive physiology and molecular biology, and other researchers in the Division of Animal Sciences.

Furthermore, Smith and Green mentored him in writing a pending USDA grant proposal that would in part allow MU researchers to help assist with the work that has provided the fuel to Pohler’s dissertation. A decision on the grant should be known by some time in August.

As far as whether he will pull for Missouri or Tennessee whenever the two meet up athletic contests in the Eastern Division of the Southeastern Conference, Pohler will not take a side.

“I’ll root for A&M,” Pohler said with a chuckle, “because that’s where I did my undergrad.”