The timing just seemed right. That was the consensus of those who helped organize the first tour of the University of Missouri’s Foremost Dairy Research Center by members of the Missouri Dairy Association and the Missouri Dairy Growth Council – and several other dairy farmers across the state June 19. 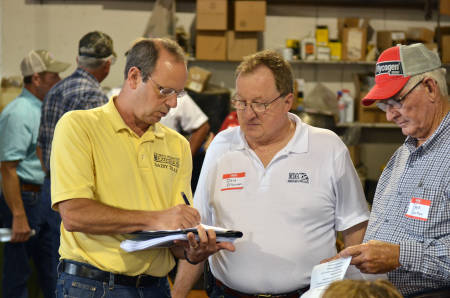 “The stars aligned for us this year to be up here,” said Missouri Dairy Association executive director Dave Drennan. “It just seemed like a good opportunity to focus on what Foremost means to the dairy industry in this state – not only the research, but what’s in the pipeline.”

Those stars included June being recognized as National Dairy Month and the recent approval of the Missouri Dairy Revitalization Act earlier this year, which was sponsored in the Missouri House of Representatives by Bill Reiboldt from District 160, Neosho, and later signed by Gov. Jay Nixon. The landmark legislation, the first to be passed by any state, provides additional support to the dairy title provisions of the federal Farm Bill.

Creating a ‘higher level of awareness’

The Act includes the addition of 80 scholarships at $5,000 each toward tuition at any college or university in the state for students who major in agriculture-tied degree programs, as well as the continuation of a loan program for large-animal veterinary students.

In the spirit of the act’s approval, the College of Agriculture, Food and Natural Resources’ Division of Animal Sciences joined forces with MU’s College of Veterinary Medicine to show how both schools can provide invaluable resources to the state dairy industry. The MU Extension Dairy Team includes faculty from both colleges and MU Extension. In addition to student-guided tours of the facility, students from each of the programs displayed posters of recent findings and discussed their research with attendees. 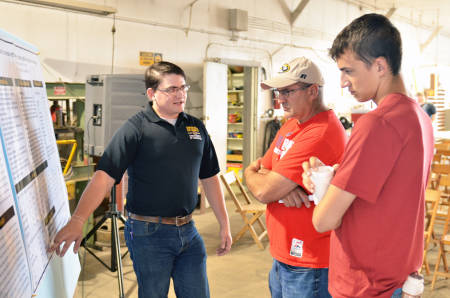 “What we’re really looking forward to doing with you folks going forward is to have a much higher level of awareness of what we’re doing in our programs here at the University,” said Tom McFadden, director, Division of Animal Sciences, to the gathered crowd of approximately 80 people. “We really emphasize experiential learning, which means not just theory while you’re sitting in the classroom, but getting out and learning how you apply that theory and really develop the skill set, so that we can improve our supply of employees and future managers and owners of the dairy industry in Missouri as well as our dairy animal veterinarians.”

McFadden added that he hoped the event “will be the initial rung of what will come to be annual Dairy Days that we can host here at Foremost and continuously give you updates on what’s going on at your University.”

Along with Drennan, McFadden organized the event with Scott Poock, associate extension professor in veterinary medicine and leader of the Extension Dairy Team; and Joe Horner, extension associate in agricultural economics in CAFNR’s Division of Applied Social Sciences. Eric Adkins, research specialist at Foremost Dairy, and Foremost staff and student employees led tours and preparation of the facilities. 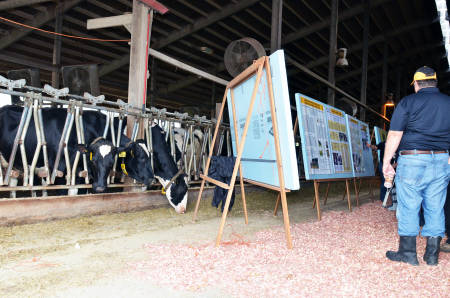 Pamela Adkins, large animal internal medicine specialist at CVM, said she would like to see the continuation of the partnership between the animal sciences and veterinary medicine programs.

“I think when we work together with the animal science group we can combine our different expertise to be able to help dairy farmers from across the state,” Adkins said. “This type of collaboration also allows us to highlight multiple aspects of what we’re doing here at the University at once.”

Those in attendance included Missouri State Rep. Chuck Basye of District 47 and Reiboldt, who addressed the crowd at the start of the event.

“It is a pleasure to work on agriculture issues in the Missouri House and in particularly our dairy legislation that we got through,” Reiboldt said. “The work’s not done. We’ve got it passed. We’ve got it signed by the governor, but we still have a lot of work to do because we need to have it funded.” 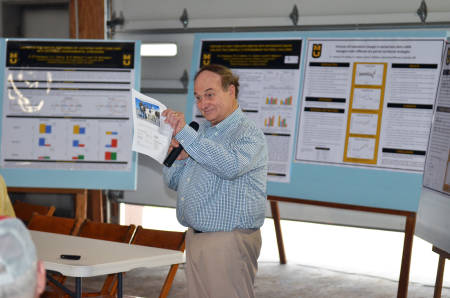 State Rep. Bill Reiboldt addresses the crowd before a tour at the Foremost Dairy Research Center.

Reiboldt took part in one of the tours with his wife, Kathleen – both of whom were raised on dairy farms in the far southwest corner of the state in Newton County. They later had a farm of their own before Bill ran for office.

“What I see is that the transition over the years from my dad’s dairy to my dairy to the dairy of tomorrow and today, the future,” he said.

That sentiment was reflected in the tour participants who ranged from 85-year-old Arlen Schwinke, who became the first Missouri Dairy Association president in 1984, to the young children of dairy farmers.

Foremost, which is located 10 miles northwest of the MU campus, features approximately 425 head of cattle of mostly Holstein and Guernsey breeds on 819 acres. The land was first donated by Missouri businessman J.C. Penney, along with a herd of prize-wining Guernsey cows. The farm is named after Langwater Foremost, Penney’s favorite bull who was purchased for the then-record sum of $20,000 in the 1920s. 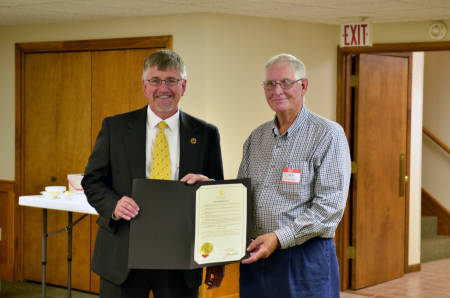 Following the tour, several attendees headed to a luncheon at the home offices of the Missouri Pork Association, where Richard Fordyce, the director of the Missouri Department of Agriculture, presented Missouri Dairy Association President Lloyd Gunter with a proclamation from Gov. Nixon as June as Dairy Month in Missouri.

“They do an awful lot of work,” Gunter said of those who work at Foremost and the rest of the research centers around the state, “and we as dairy farmers we need to holler at these people because they have some of the expertise we need.”