To some, it’s a freezer bag stuffed with soil. To those who run the College of Agriculture, Food and Natural Resources’ Soil Health Assessment Center, it’s the lifeblood of a national initiative to analyze the organic matter quality of soil that could reap significant dividends for Missouri farmers and landowners.

Traditional soil testing practices — checking the levels of nitrogen, phosphorus and potassium, for example — date back to the 1840s. The work that Randy Miles and his staff have been doing for the last three years at the center represents a movement that is essentially a few weeks old by comparison.

“We’ve done a good job of assessing the physical and the chemical properties over the years. Now it’s the biological assessment,” said Miles, an associate professor in soil science at CAFNR who also serves as the director of the Sanborn Field and Duley-Miller Research Plots.

One approach, many benefits

As part of the five-year initiative spearheaded by the Natural Resource Conservation Service, the assessment center has received recent funding from the state office of the NRCS as well as the Missouri Department of Natural Resources.

The DNR has recently placed additional emphasis on the testing by making it mandatory for those farmers and landowners who take part in its cost-share program. Within the next couple of days, the program will be begin to be partly funded through the Missouri Parks & Soils Sales Tax (one-tenth of one percent), which also helps fund the maintenance of state parks.

“The Soil and Water Conservation Program in DNR is supporting this because they want to know that as they do cost share with a farmer who says I’m going to get X dollars per acre to put in these improvements, they want to know what the improvement is after three years or five years,” Miles said. “We’re trying to get a baseline to understand what happens and so [farmers] can show or at least somehow account for the money they spend and how much improvement in quality of the soil or health of the soil there’s been.” 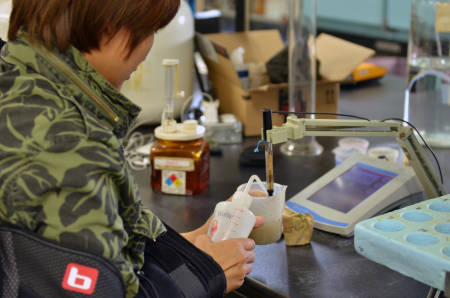 By researching active carbon and overall microbial activity in soil, the center hopes to be able to make more informed recommendations on possible cover crops or other factors that could stimulate plant growth and lead to healthier soil. Other benefits of this new approach could less erosion and runoff, and therefore, a cleaner water system by reducing sedimentation in rivers and streams.

“The soil microbes have been found to be a lot more important that what we previously thought for a variety of reasons,” said center research specialist Donna Brandt. “The soil is a huge sink for carbon and the amount of carbon in the soil has decreased greatly through the years and if you can, for example, grow cover crops and have that carbon go back into the ground instead of harvested and taken off, then you’re taking carbon out of the atmosphere and putting it into the soil.”

Through testing such factors as aggregate stability and bulk density, the center also aspires to gain a better understanding of water infiltration to serve as buffer against drought and to help combat what Miles refers to as “climate variability.” He talked about how several farmers have mentioned to him that they have been receiving the same amount of annual rainfall in recent years, but in really intense spurts followed by extended dry periods.

“I would contend from a climate variability aspect that a healthy soil would be more resilient in capturing a higher percentage of that water that’s in that quick burst,” Miles said. 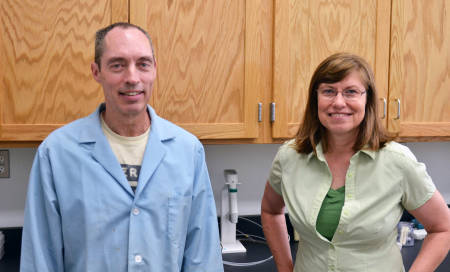 Russell Dresbach and Donna Brandt oversee the operations of the Soil Health Assessment Center at the South Farm Research Center.

In addition to farmers and landowners, the center also serves other clientele such as researchers, consulting firms, state agencies and landscape architects.

By his account, Miles and his colleagues are developing “the first comprehensive soil health assessment lab at a land-grant institution” that will serve not only Missourians for commercial purposes, but clients from neighboring states as well. “The intention is to make this a regional center,” said lab supervisor Russell Dresbach, who also mentioned that part of the center’s mission is to build a first-ever database for soil health.

The assessment center, which began in 1985 as the Missouri Soil Characterization Lab to assist with the Missouri Soil Survey, has been housed in various buildings on the University of Missouri campus. It was most recently housed in the Civil & Environmental Engineering Department in Lafferre Hall before moving into a remodeled facility at the university’s South Farm location this past January. The new locale has made it easier for clients to drop off soil samples instead of having to head to the main campus. “We’ve got a garage door that we can just lift up and roll them in,” Brandt said. 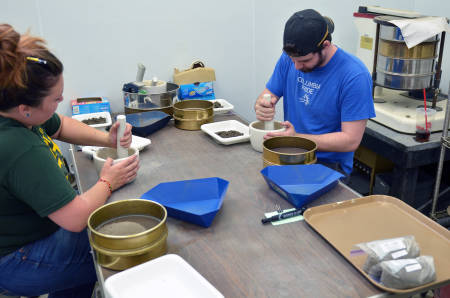 Currently the center is in the midst of a three-phase plan. Phase one consists of the main building, where new cabinets and countertops were recently installed. It is here where one will find the room specifically designed for all of the new biological testing — right next to tall shelves brimming with soil samples.

Phase two is comprised of offices and space for sample preparation and storage in an adjacent building. A breezeway with freezer storage compartments (all soil samples being tested at the biological level must be kept either refrigerated or frozen) will connect the two buildings in the third and final phrase.

Once the center is up and running this summer, Miles envisions the center one day resuming its partnership with the National Soil Survey Center in Lincoln, Neb. Miles and company did some sample analyses for them on a contract basis a few years back when the lab, which receives soil from across the globe, had more samples than it could handle.

“We have worked with them before and we will look at working with them again,” he said.