It’s always a CAFNR family affair when Float Your Boat for The Food Bank takes to the water each spring.

Not only is CAFNR the presenting sponsor of the fun, family-friendly event, but many boats have a connection to the College of Agriculture, Food and Natural Resources. This year was no exception — and what an exceptional year it was. Float Your Boat raised more than $32,000 for The Food Bank for Central and Northeast Missouri as nearly 70 teams took to the water of Bass Pro Shops Lake.

“We were so happy with the turnout this year — especially since there was a quite a bit of rain in the forecast,” said Vice Chancellor and CAFNR Dean Tom Payne. “The community — especially our CAFNR community — really steps up to help feed hungry people in mid-Missouri. It’s a fun way to raise funds for The Food Bank.” 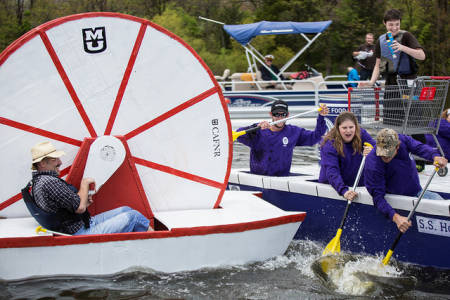 CAFNR’s Riverboat knocks into The Food Bank’s vessel as the race gets underway.

CAFNR organizations including Agricultural Communicators of Tomorrow, CAFNR Student Council, Ag Systems Management Club and Alpha Gamma Rho participated, most for the second or third or even fourth year. Alpha Gamma Rho even nabbed the Pirate Award, meaning they used too much duct tape or other prohibited materials (whether by accident or on purpose)! SNR’s Limnology Lab also took to the lake with Yertle, educating attendees about turtles in their pit area before the event. Captaining the Yertle boat was Dan Obrecht, research specialist senior, fisheries and wildlife sciences. 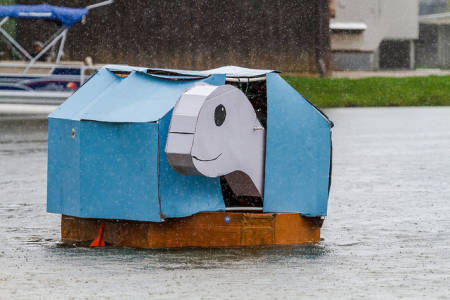 Yertle takes to the water.

And in a different take on the phrase “CAFNR family,” children of faculty members Julian Binfield, assistant research professor, FAPRI, and Joe Parcell, professor and department chair of agricultural and applied economics, participated in the short course. Binfield’s family had two boats, including the Turkducken. The Parcells boat was called the Bear Hunters.

The April 25 event was the fourth annual Float Your Boat. The event has grown every year, with about 20 boats the first year, 40 the second, 50 in the third race, and now 70 in 2015. The money raised has also grown proportionately. The money raised this year will help to provide 400,000 meals or 480,000 pounds of food. Funds are raised through sponsorships, registrations, event concessions and by the teams themselves as they compete for the People’s Choice Award, given to the group that raises the most donations for their boat.

Plans are already underway for the fifth annual Float Your Boat — the most important of which is the goal of raising $50,000. The event challenges teams to create vessels solely from cardboard, duct tape, adhesive and latex paint. At least two people must ride in each boat, although some had as many as eight or nine.

See video from the event at: https://www.youtube.com/watch?v=GP5KwIT5ko8