Trista Strauch, assistant teaching professor of animal sciences and fisheries and wildlife sciences in the MU College of Agriculture, Food and Natural Resources, has received one of the 2015 William T. Kemper Fellowships for Teaching Excellence. 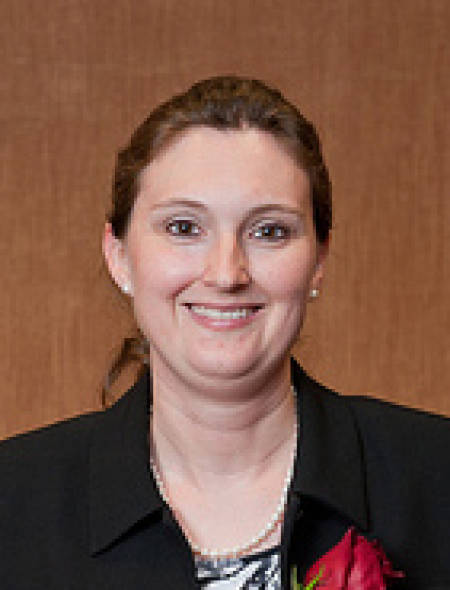 Chancellor R. Bowen Loftin, Commerce Bank Chairman Jim Schatz and a group of professors, administrators and staff surprised Strauch by honoring her with the Fellowship, which includes a $10,000 check. Kemper Fellowships are awarded to five outstanding teachers at the University of Missouri each year. This year is the 25th anniversary of the first William T. Kemper Fellowships for Teaching Excellence.

Strauch is the 26th CAFNR teacher so honored since the Kemper awards were begun in 1991.

Trista Strauch’s students and colleagues say she has excelled in her role as an educator, improving student learning, performance and enthusiasm.

“Dr. Strauch is not only a gifted teacher but also has the compassion to help students become self-learners and problem-solvers in any field they choose,” says Rodney Geisert, professor of reproductive biology at MU. “Students love her not because she is easy but because she pushes them to accept responsibility for their own educations and choices. Dr. Strauch is willing to help every student, but she expects nothing short of their full commitment and willingness to go beyond average. For that, many have moved into careers which previously were only dreams. I believe Dr. Strauch’s dedication to and success in teaching and in establishing a new program in food and agriculture sciences exemplifies the purpose of the William T. Kemper Fellowship for Teaching Excellence Award.”

Originally hired in 2006 to serve as coordinator for the Division of Animal Sciences’ newly established captive wild management minor emphasis, Strauch has since taken on the revision and updating of the Department of Fisheries and Wildlife Sciences’ introductory zoology course.

Strauch says her philosophy of teaching has four main components: 1) Teaching is interactive and requires the establishment of trust. 2) Students learn best through personal discovery. 3) Students must be trained to critically evaluate and apply information. 4) Students need to take personal responsibility for their education.

“Hands down, our most successful undergraduate experience, involving some 150 students, is entirely due to Trista’s efforts and energy,” says John Jones, professor and chair of the department of fisheries and wildlife sciences. “She teaches an introductory course on captive animal management that includes guest speakers from the industry. The senior seminar is taught in two sections to accommodate class conflicts, and she oversees scores of summer internship experiences at zoos and similar facilities in numerous locations, including Alaska.”

In addition to teaching, Strauch advises nearly 200 students a year, and in 2014 she wrote more than 65 letters of recommendation for those students. Strauch also serves on a number of committees and boards, including the CAFNR Advising, Learning and Teaching Enhancement Committee, the Office of Service Learning Advisory Board, the Animal Sciences Academic Affairs Committee and two subcommittees within the Commission for Student Success.

“Dr. Strauch is clearly a professor any student would be lucky to have, but she also works just as hard to be an excellent adviser,” says Rachel Gerrard, an MU graduate student. “I know that during the time before class registration, it is hard to not find her in her office with a student intently listening to her advice on how to best structure his or her schedule for the next semester or what internship will get him or her prepared for a future career. From personal experience with her as an adviser, I know that she will spend as long as it takes with students to talk out any issues until they can leave her office feeling comfortable with their schedule, career objective or project design.”

Strauch earned bachelor’s and master’s degrees in animal sciences from the University of Missouri and a doctorate in physiology of reproduction from Texas A&M University. She completed post-doctoral research at the Animal Physiology Research Unit at United States Department of Agriculture’s Agricultural Research Service in Columbia, Mo.

The William T. Kemper Fellowships for Teaching Excellence were established in 1991 with a $500,000 gift. Kemper, a 1926 MU graduate, was a well-known civic leader in Kansas City until his death in 1989. His 52-year career in banking included top positions at banks in Missouri, Kansas and Oklahoma. Commerce Bank manages the trust fund.