Plants have mechanisms for protection against pathogens including bacteria, but if a plant is unable to effectively induce and control its defenses, pathogenic bacteria invade and colonize the host, which can lead to reduced yield and nutritional quality of crops.

A University of Missouri research team has uncovered new regulations of defense pathways for plants. This discovery could lead to helping garden plants like tomatoes fight off certain bacteria better and has implications for pear trees, roses, soybeans and rice. 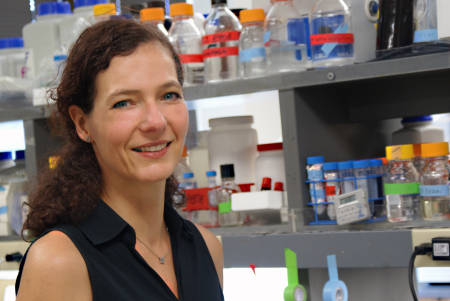 “Each year, millions of dollars are lost from damage to crops and ornamental plants caused by pathogens, which include a bacteria known as Pseudomonas Syringae,” said Antje Heese, assistant professor of Biochemistry at MU. “This bacteria directly affects tomatoes and causes speck disease that permanently damages the fruit and leaves. In our study, we used Arabidopsis thaliana, a plant that has the same immune response as tomatoes but grows at a faster rate, to study the immune responses of plants.”

Previously, researchers thought that a plant defended itself against bacteria by activating a specific, several-step process. However, Heese’s team found that if the plant is exposed to bacteria, it actually activates its immune system using three separate mechanisms.

Heese and her research team, including MU graduate student John M. Smith, confirmed that each mechanism responding to the infection is doing so independently of the other two mechanisms, and that each of these mechanisms must have the right amount of specific proteins, called immune receptors,  in the right place to respond appropriately. Having the right combination provides the plant with an effective and efficient immune response. 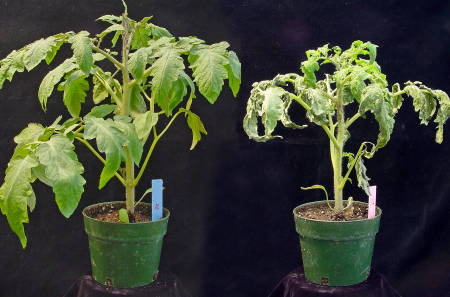 Plants that are infected with speck disease (right) often have wilted leaves and damaged fruit.

This discovery could allow future scientists to create new strategies to help plants fight disease and lead to better crops.

“Like any living organism, plants have limited resources and they have to use those resources effectively,” Heese said. “If the plant makes too much of the proteins responsible for these mechanisms, they will suffer in other areas, such as creating quality fruit. This same discovery can be applied to many crops, including rice and soybeans, and ornamental plants, including roses, pear and apple trees. The information discovered in this study gives scientists something new to study in plants, with the eventual goal of better crops and ornamental plants.”

The study, “Loss of Arabidopsis thaliana Dynamin-Related Protein 2B Reveals Separation of Innate Immune Signaling Pathways,” was published PLOS Pathogens. Sebastian Bednarek, professor of biochemistry at the University of Wisconsin-Madison and MU assistant professors Abe Koo and Peter Cornish contributed to this research. The study was supported by grants from the National Science Foundation and the University of Missouri.

The MU Department of Biochemistry is housed in the College of Agriculture, Food and Natural Resources and the School of Medicine.