Though his laboratory is still mostly empty except for stacks of unopened boxes, his excitement at being a professor and signature hire at the University of Missouri couldn’t be more full. Thomas Spencer has arrived at MU after accepting an appointment in CAFNR’s Division of Animal Sciences with a joint appointment in the School of Medicine’s Department of Obstetrics, Gynecology and Women’s Health. He was drawn to MU’s “critical mass” of talent in animal science and commitment to One Health/One Medicine, which fosters research and knowledge sharing to improve human and animal health.

Spencer is internationally recognized for his research in reproductive and developmental biology. He studies how to increase fertility in beef and dairy cattle, which can help cattle farmers be economically successful and feed a growing world population. In addition, he studies how to translate animal research to human medicine to solve fertility problems in women and improve their reproductive outcomes.

“This is an exciting and relatively under explored area in the health profession,” Spencer said in his office in the Animal Science Research Center. 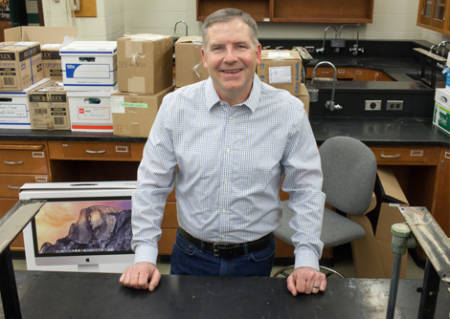 The Best in the Field

Administrators and colleagues are happy to have Spencer aboard. “Tom is by all accounts one of the very best animal scientists in the world today,” said Hank Foley, executive vice president for academic affairs, research and economic development at the University of Missouri System. “His decision to join MU at this point in his career speaks volumes about the department, college and university.”

Though an expert in livestock fertility, Spencer did not grow up on a rural farm. He was raised in Auburn, Alabama, a city much like Columbia. There he was drawn to a high school vocational agriculture program. This led to his membership in the Future Farmers of America and establishing a 120-head livestock operation, which helped fund his college career.

Spencer earned a bachelor’s and master’s at Auburn University and a doctorate in reproductive biology from Texas A&M University. After postdoctoral training at Baylor College of Medicine in Houston, he became an animal science professor and researcher at Texas A&M and, most recently, Washington State University. He’s won numerous awards, published hundreds of journal articles and has more than 11,000 citations.

Spencer’s area of study has been the hormonal, cellular and molecular mechanisms regulating development and function of the uterus and placenta. For 20 years he has focused on increasing livestock fertility.

Decades ago, scientists bred cattle exclusively for maximum production of milk or beef. But “when you select only for one thing, you always sacrifice something else,” Spencer said. The effect was a substantial decrease in cattle’s fertility and health, a death knell to efficient selective breeding.

In the 1970s and ’80s, scientists at the University of Missouri and other institutions began research into methods to increase fertility. Since then, Spencer and other animal science experts like MU’s Jerry Taylor, Curators Professor of Genetics and Animal Sciences, have further advanced the field.

Spencer is excited to collaborate with a team using leading-edge technology to identify genes of fertile cattle that are also high producers. That’s a money-saver for cattle farmers in Missouri and around the world, since farmers could raise animals for two years only to discover they have fertility issues. “The [dollar] footprint of what it takes to produce X pounds of meat or X pounds of milk is reduced if you can increase fertility,” Spencer said.

The distinguished scholar hopes to have his laboratory bustling with research by late May. In the meantime, he’s establishing collaboration across the campus, working with other animal science researchers and preparing to teach a graduate class.

“Rarely in life do you get the opportunity to be in a profession that really excites you,” Spencer said. “I’m in that profession and now at a university where the potential is unlimited.”