During a visit to help some of the poorest farmers in Sub-Saharan Africa adopt soybeans as a new crop to boost their nutrition, income and soil quality, University of Missouri researchers came across an unexpected problem. Farmers were reluctant to grow the beans as manually shelling the seed pods tore into their hands. In an area where medicine is as difficult to obtain as mechanized farming, the objection was a big hurdle in getting the farmers to accept the new crop.

Going beyond the original federal grant, Kerry Clark, research associate in the Division of Applied Social Sciences, and who is working with the farmers to improve their agricultural practices, is coordinating an effort to seek donations of work gloves for the farmers. So far, almost 1,000 pair have been collected. 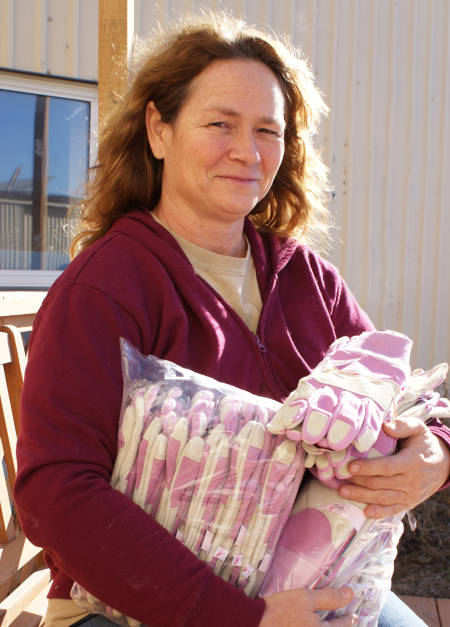 The first package of gloves to Ghana, along with a kit to begin the growing of soybeans, will be shipped in March when Clark revisits the country. Each kit contains five pounds of soybean seeds specifically selected by Mizzou plant scientists to grow best in the poor soil of the region.

The gloves were donated by Midwestern glove manufacturers. The gloves have leather palms and are made for women. Women make up the majority of subsistence farmers in countries like Ghana. The initial donation was made by Midwest Gloves & Gear, Chillicothe, Mo., and Kinco Gloves, Norwalk, Iowa. Tammy Hudson, a buyer at Orscheln Farm and Home, Moberly, Mo., coordinated the gift.

The soybean project will send seeds and expertise to Africa for the next four years. Clark said the effort will require 1,000 gloves for each of those years.

A Tough Harvest by Hand

Soybean harvesting in western countries is done by machine, technology undreamed of by the poorest farmers in Africa where only hand tools, at best, are available, Clark said.

“The problem is, the soybean husk is hard, brittle and sharp,” Clark said. “Farmers put the husks in tarps and beat them with sticks to break them up. You can’t help but cut your hands when you pull the soybeans out from the broken husks.”

Clark, a native of Columbia, began her MU career in 1989 as a soybean breeder. She earned her undergraduate and masters at CAFNR and will soon complete her doctorate in soil science. Her other research duties look into improving organic farming practices.

Part of a Global Effort

The soybean project is officially called the Feed the Future Innovation Lab for Soybean Value Chain Research project. MU is a partner with the University of Illinois at Urbana-Champaign and University of Mississippi in the effort. It is one of 10 new U.S. government Feed the Future Innovation Labs designed to increase global food security and help small farmers in Africa boost incomes and improve nutrition. These Innovation Labs draw on the expertise of top U.S. universities and developing country research institutions, and will tackle some of the world’s most challenging agricultural research problems.

MU is also partnering with Pennsylvania State University on another project to develop climate resilient phosphorous-efficient beans for Africa. Other projects are looking to boost production of poultry, sorghum and millet, wheat, and aquaculture and fisheries. 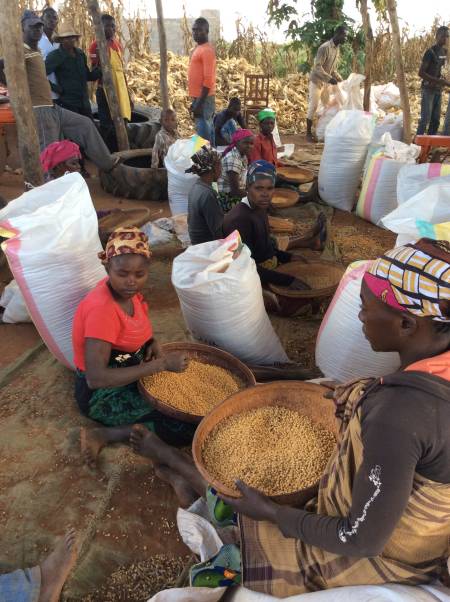 The soybean project is intended to accelerate small farmer access to transformative agricultural technologies. The project is working in four countries within the G8’s New Alliance for Food Security — Ethiopia, Ghana, Mozambique and Zambia — where it will help governments strengthen commercialization, distribution and adoption of improved seeds and other key technologies. The project aims to increase production of high-quality seeds by 45 percent in three years and ensure that 40 percent more farmers gain access to innovative agricultural technologies.

Many of the farms of Sub-Saharan Africa are small, generally just a few acres, and operate at an almost subsistence level. Electricity is rarely available. These farms are mostly run by women using hand tools, animal power and manual labor. Men tend to take paid employment in the villages.

Like much of Africa, Ghana has poor soil. According to the USDA, 55 percent of the land in Africa is unsuitable for any kind of agriculture except nomadic grazing.

About 16 percent of the land has soils of high quality and about 13 percent has soils of medium quality. This land has to support about 400 million people. The USDA estimates that with better management, an additional 4 million kilometers can be made suitable for agriculture.

Consequently, malnourishment affects roughly 223 million people in Sub-Saharan Africa — about one-quarter of the region’s total population — according to estimates by the Food and Agriculture Organization (FAO) of the United Nations.

An International Center for Soil Fertility and Agricultural Development report said that more than 60 percent of Africa’s population is directly engaged in agriculture; but crop productivity has remained stagnant, while cereal yields in Asia have risen three-fold over the past four decades.