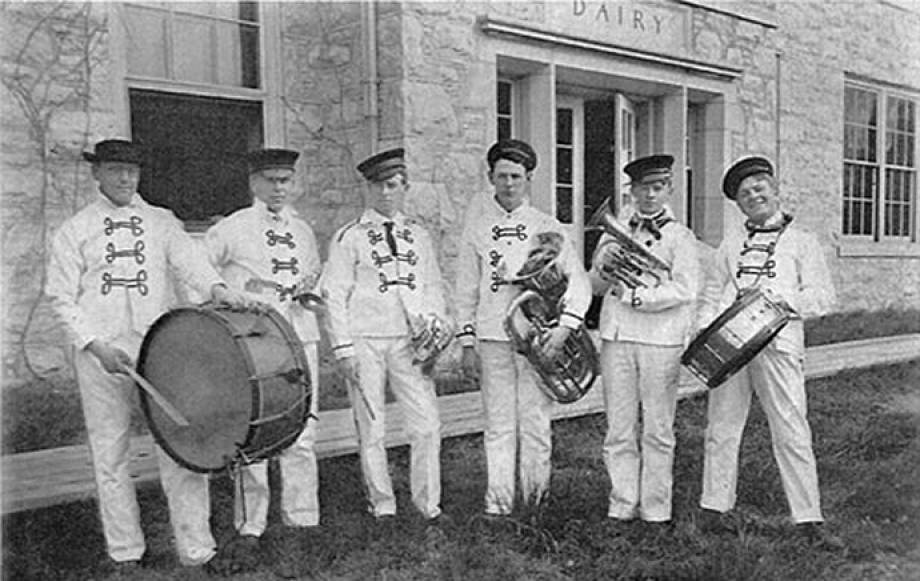 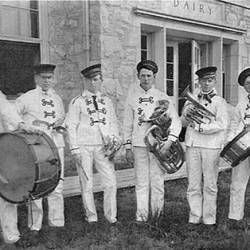 In later years Barnwarming would headline national touring dance bands. In 1906, the first year of the event, music was provided by marching dairy students. 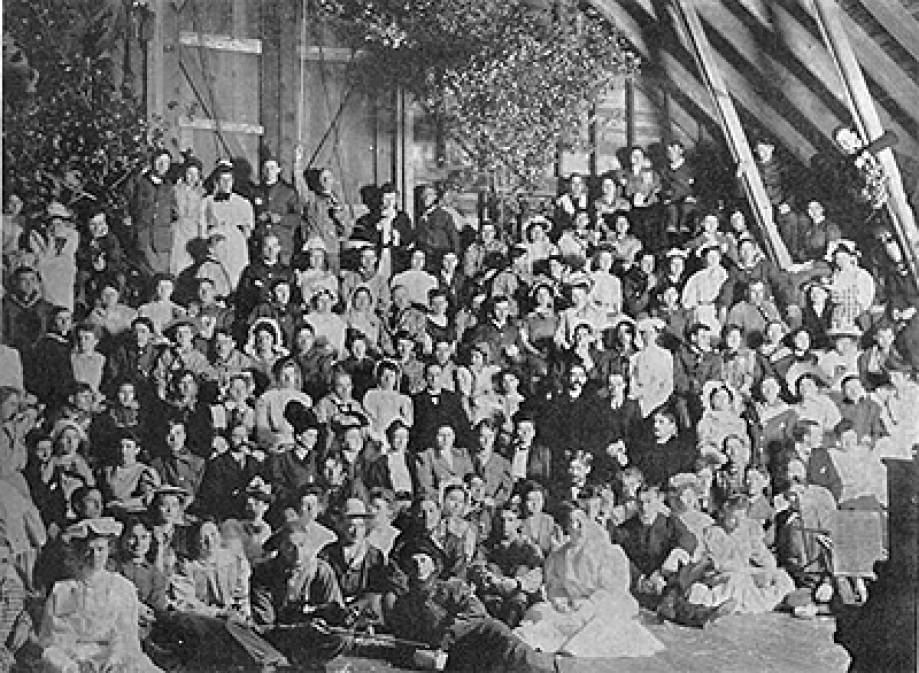 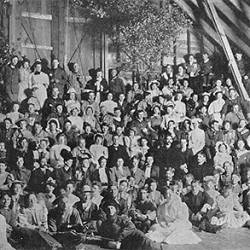 Barnwarming was a more formal affair in 1907, centered around a dance in the Horse Pavilion on the University Farm. Popular songs of that year were Irving Berlin's Marie from Sunny Italy and Alexander's Ragtime Band. 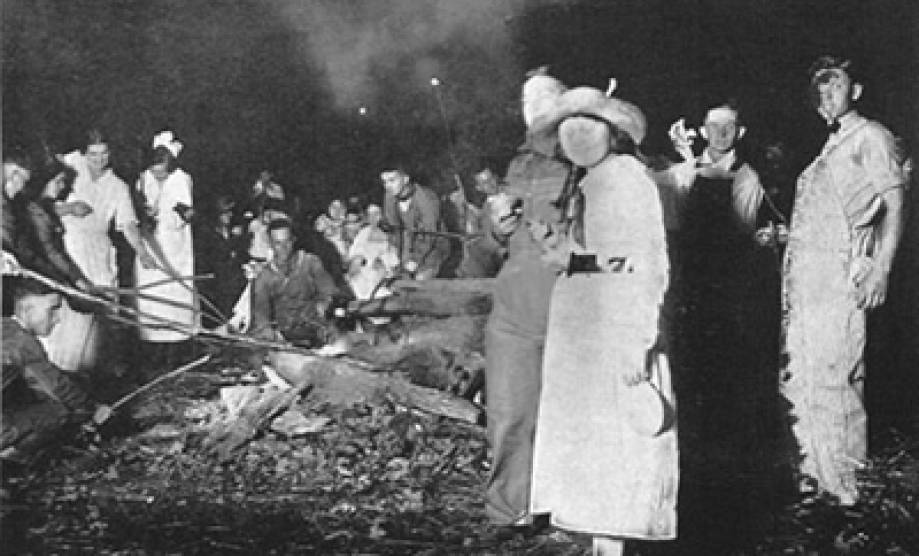 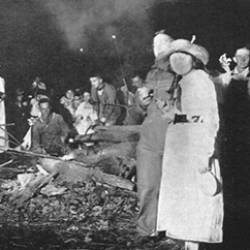 During the early years Barnwarming was decorated with dried cornhusks and autumn leaves. Burning them during the 1920 event was a great opportunity for a marshmallow roast. 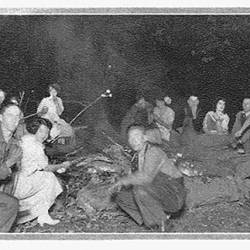 The marshmallow roast of 1923, as captured by a photographer for the Savitar. 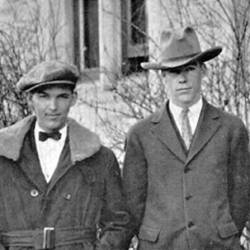 The MU College of Agriculture was considered a professional school in 1923, and the student committee in charge of Barnwarming dressed accordingly. 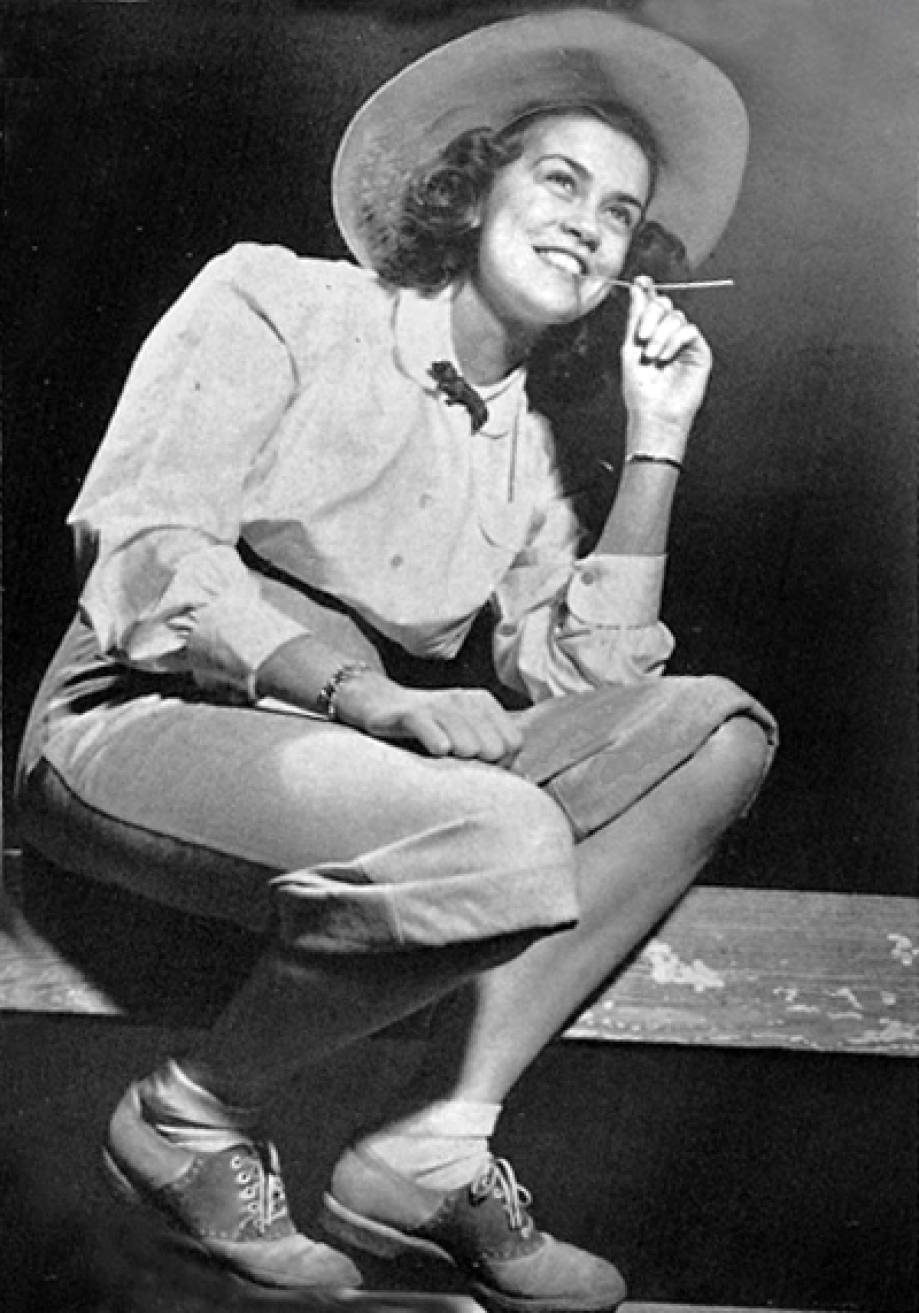 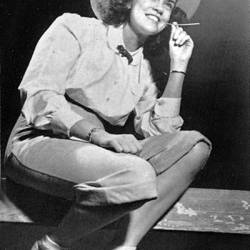 The 1941 Barnwarming Queen was Suzy Schiesl. 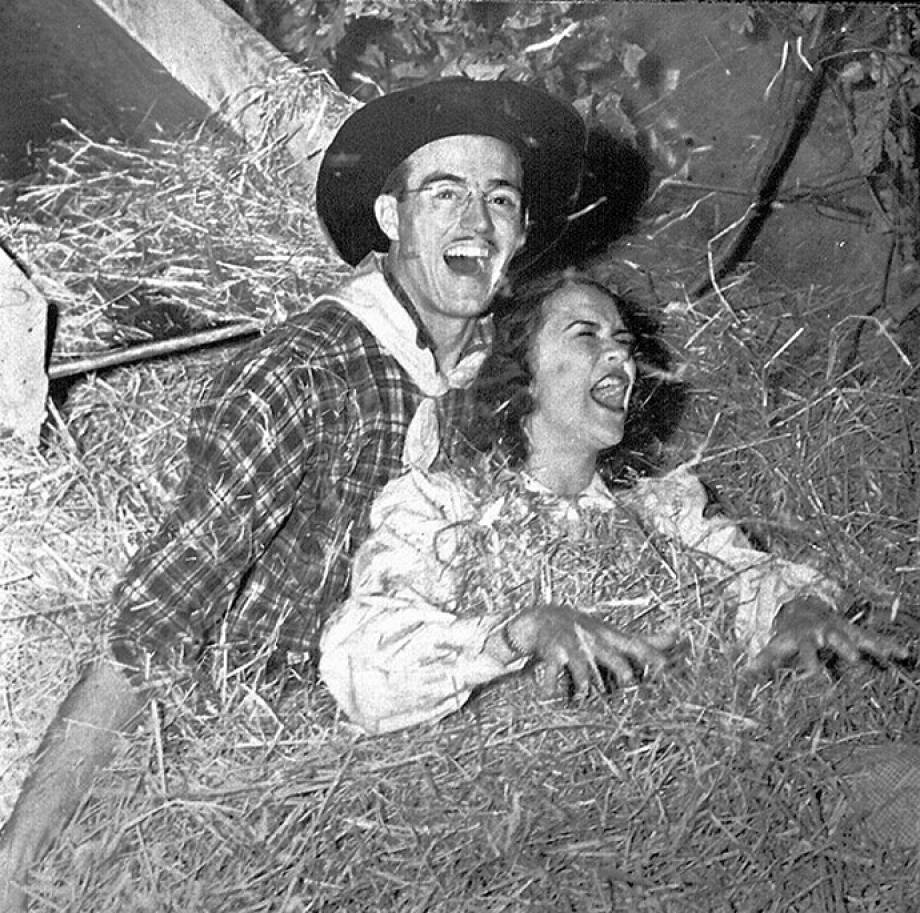 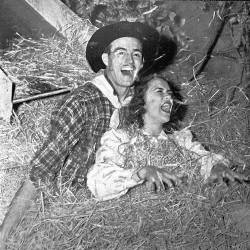 Kermit Baily and Barnwarming Queen Suzy Schiesl arrive on the greased slide at the 1941 Barnwarming. 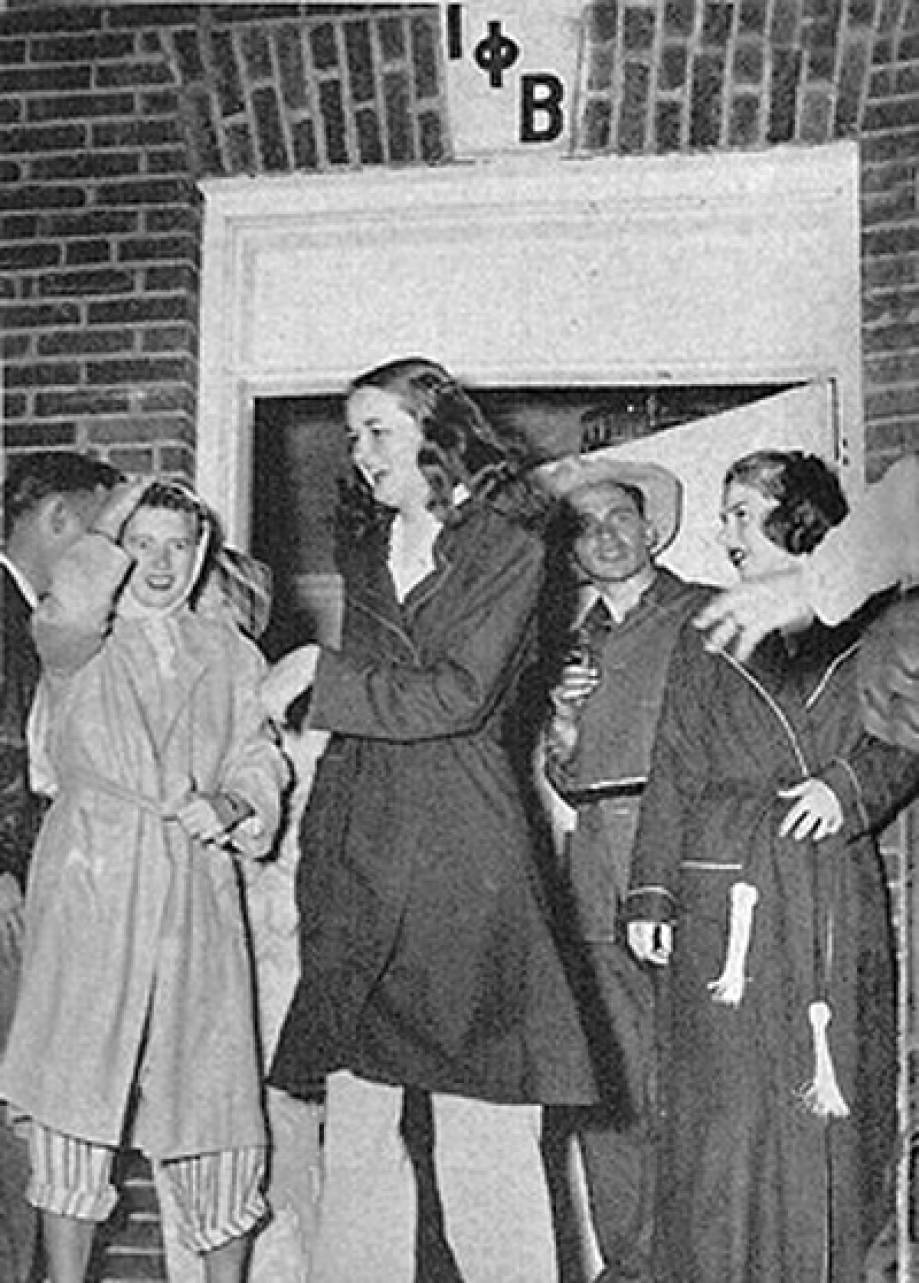 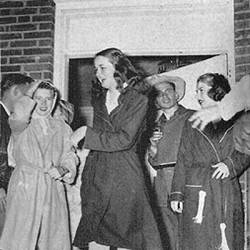 Beginning at 4 a.m., male agriculture students would make hog calls outside sororities to bring out their intended dates. This Savitar photo was taken in 1946. 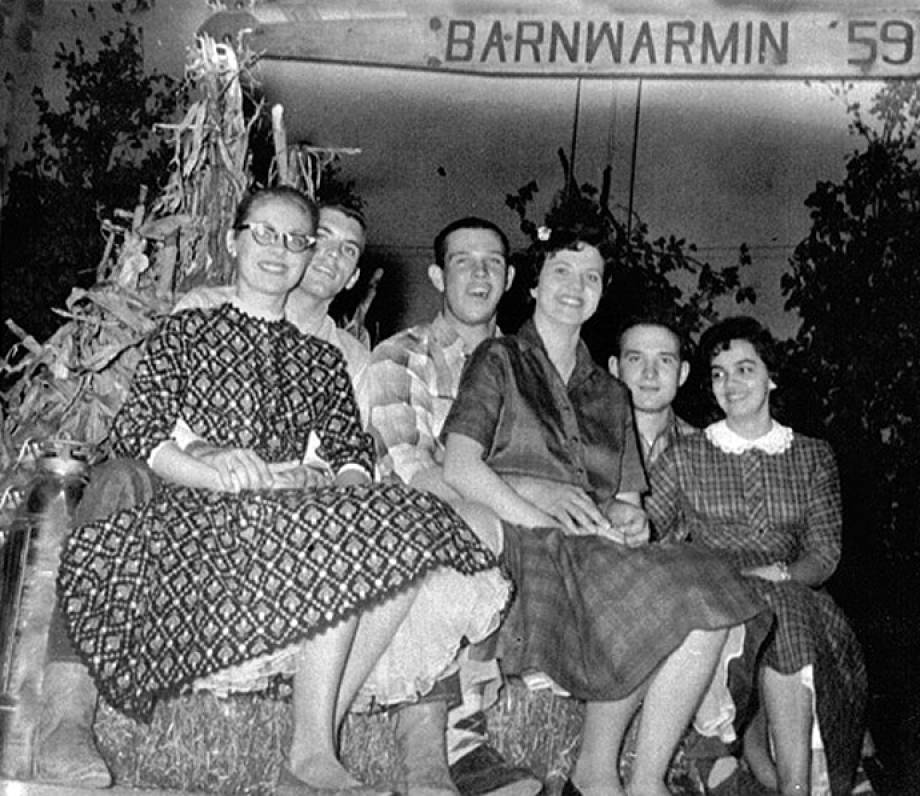 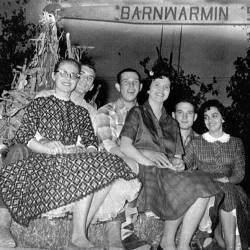 Competing for the 1961 Barnwarming Queen are (left to right) Margo Maxwell, Heather Graham, Janice Kimes (the winner) and Jan Stone. 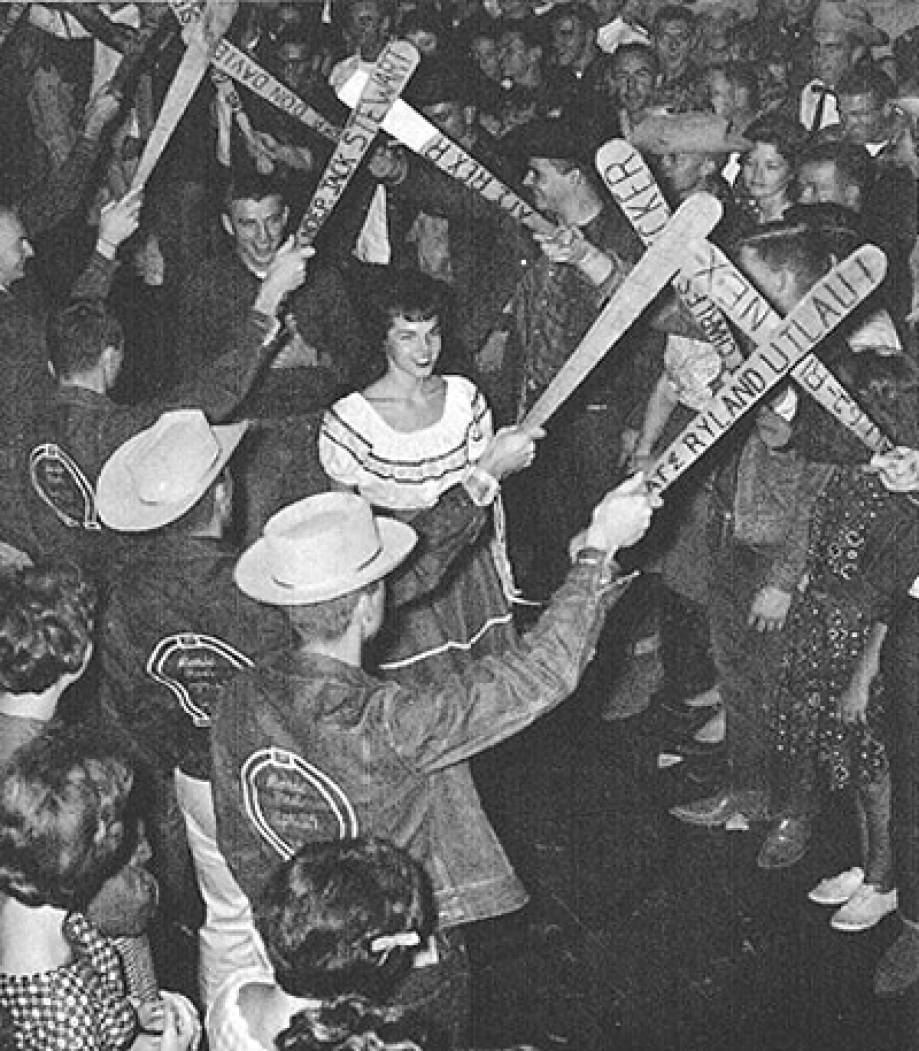 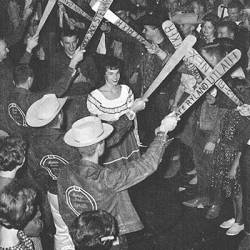 An honorary arch of Ruf Nex paddles rises above the head of queen finalist Kathy Stenzel before the crowning of the 1961 Queen of Agriculture. 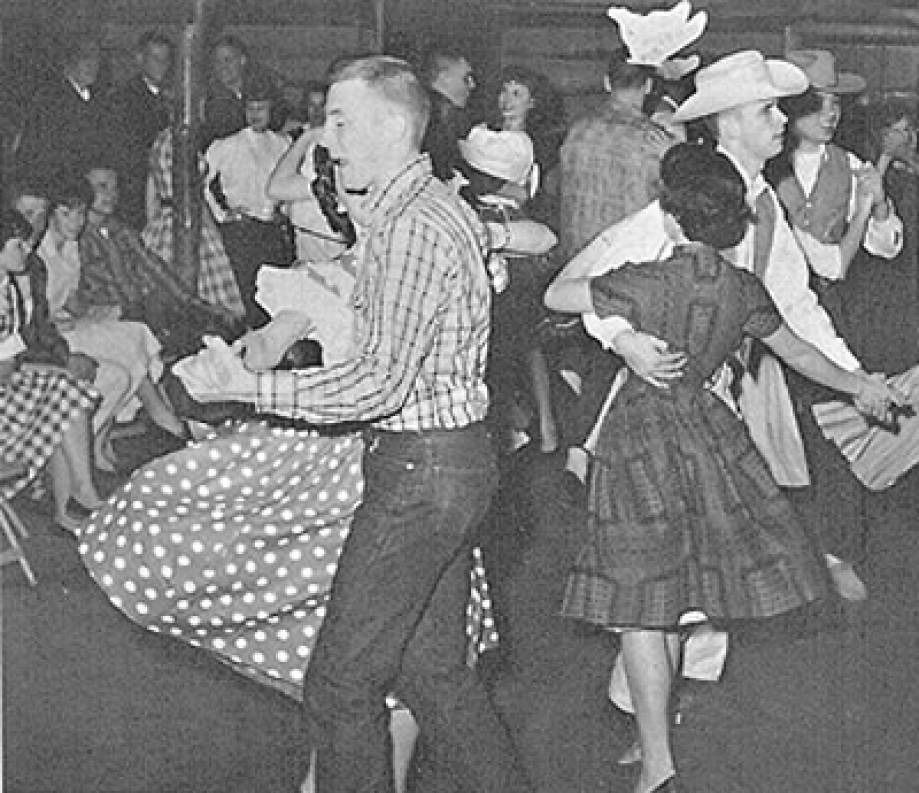 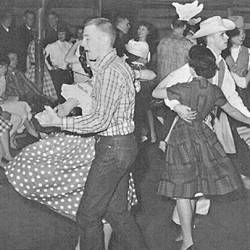 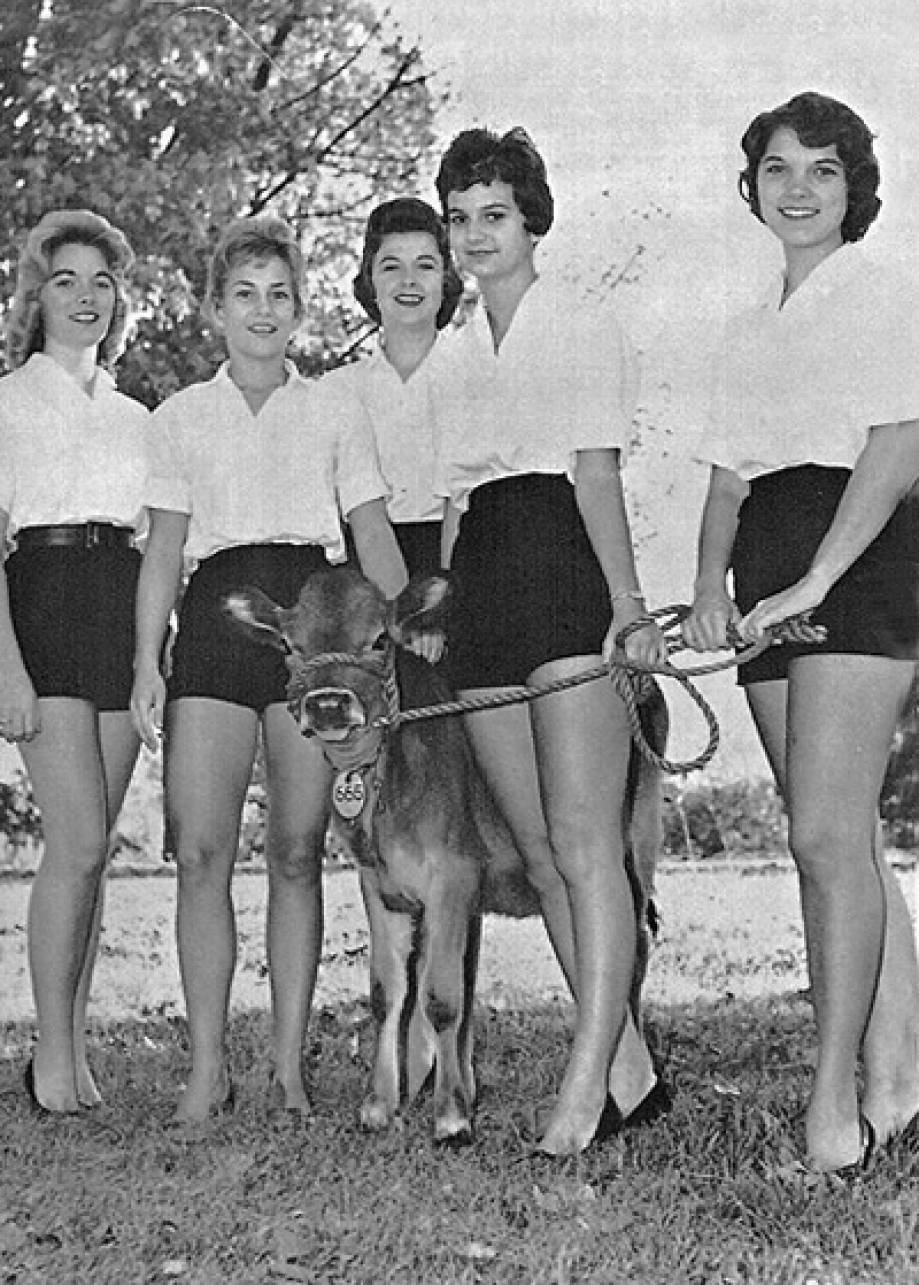 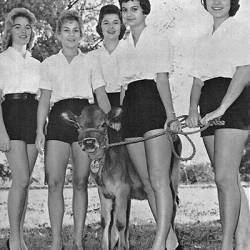 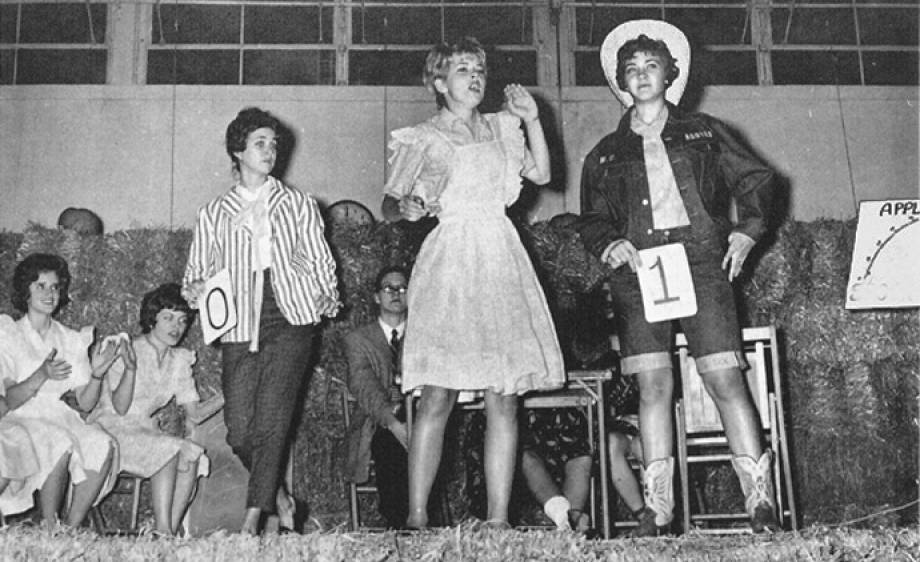 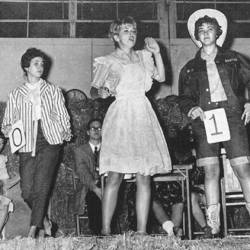 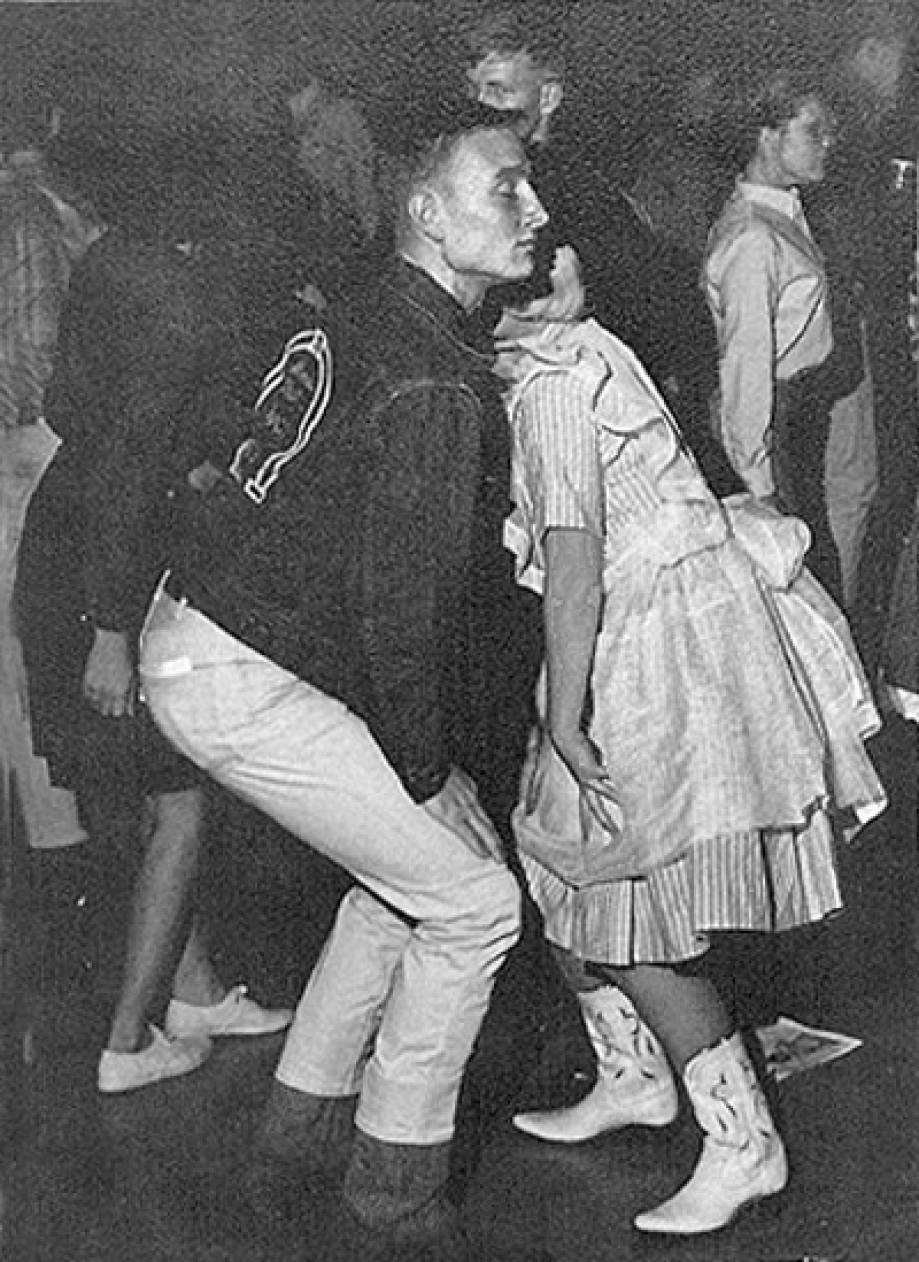 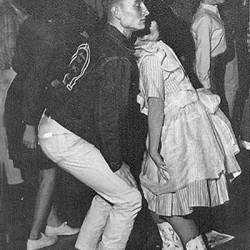 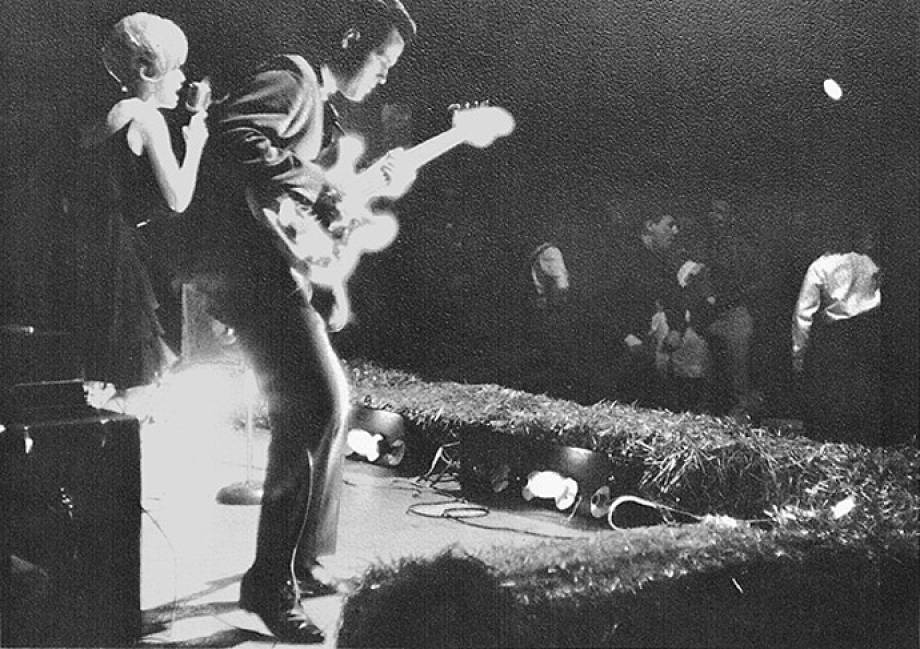 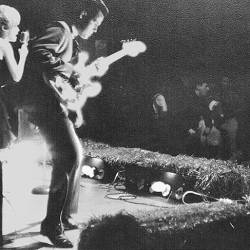 A band called the Renegades played for the 1964 Barnwarming.

Barnwarming, a staple of CAFNR Week until a few years ago, started in 1906 at the request of Dean Frederick Mumford who wanted to bring agricultural students together in a fun social event. It was an annual party at the College for a century.

The first Barnwarming was a barn dance held in the Horse Pavilion on the University Farm. It would become one of MU’s biggest campus events.

Later events were held in October and centered in Rothwell Gymnasium. In those days it could be either a formal dress-up affair or costume party. Barnwarming was organized by the Ag Club. In some years a horse show and beef and dairy judging contest were held in conjunction with the event.

The 1922 MU’s Savitar yearbook reported that in its second decade the event featured a Garden of a Hundred Fountains, cornhusk wigwams, pigs in pens, ‘possums in trees, stacks of yellow pumpkins and golden corn, bales of straw for seats, and a staircase of baled hay. A jazz orchestra provided entertainment.

In the 1930s amidst the Swing musical era, Bob Crosby and the Bob Cats, a nationally known orchestra, was brought in to entertain.

In those years, a greased slide was the only way to get into the event. VIPs entered in a dilapidated wagon pulled by a humpbacked mule. The Harvest Queen was crowned during the event.

Soo-ee: The Social Event of the Year

Being invited to the dance was a big, and unusual, deal for sororities. Beginning at 4 a.m., male agriculture students would make hog calls outside the houses to bring out their intended dates. Often, the hog callers were accompanied by a white goat. Around World War I, invitations attached to ears of corn were thrown into the windows of invitees.

Look Magazine, one of the largest national magazines of its day, published a pictorial spread of Barnwarming in its Jan. 30, 1940, issue.

An early tradition of Barnwarming was set aside in 1943 when crisp autumn leaves and corn shocks no longer decorated the event. A.L. Early, retiring president of the Ag Club, made the decision in the wake of a disasterous fire at a Boston night club. Previously, Barnwarming officially ended when the decorations were burned in a big bonfire.

In most years Barnwarming was co-sponsored by Ruf Nex, an honorary agricultural organization founded in 1920. Made up of Independent Aggies and three agricultural fraternities, Alpha Gamma Rho, Alpha Gamma Sigma and Farm House, the group promoted friendship among agriculture students. However, at Barnwarming their duties were to paddle freshman and student guests from other colleges.

Another tradition stipulated that if someone brought a non-Aggie date, to enter barnwarming the girls had to kiss a goat or the men had to kiss a sheep.

Agriculture Changes, and So Does Barnwarming

In the 1960s, Barnwarming began to have less of a rural agriculture theme with inclusion of a barbeque, comedy night, scavenger hunt, career exploration and fundraising events for the Ronald McDonald House and Central Missouri Food Bank.

Barnwarming’s centennial year was 2004. A CAFNR Corner Post article in that year described the demise of an Aggie tradition ”that wasn’t exactly talked about in front of administrators, spolioli.” Spolioli was an alcoholic drink made every year during Ag Week. The drink was made with fruit juice, and some form of alcohol, garnished with fresh fruit.

“We made the drink in trash cans and NOT on University property,” Denny Pogue, 1979 Barnwarming chairman said.