Spending time around the lake is second nature for Tony Thorpe. As the Coordinator for the Lakes of Missouri Volunteer Program, he is constantly analyzing lake water samples gathered by his volunteers, and conducting research on the water. However, one of his favorite times spent at the lake comes once a year, and it’s one that takes serious preparation. It’s the annual Float Your Boat for the Food Bank cardboard boat regatta held at the Bass Pro Shops Lake in Columbia.

The College of Agriculture, Food and Natural Resources is the presenting sponsor of this family-friendly event. This April will be its fourth year. 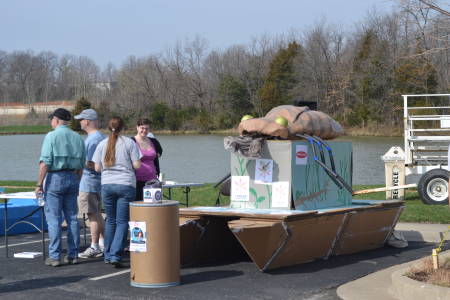 Thorpe and team’s, dragonfly boat for the 2014 Float Your Boat Regatta.

The event raises money for The Food Bank for Central and Northeast Missouri, and Thorpe has been a dedicated participant from the start.

Usually he and his team begin working on their boat the month before the race. Prior to constructing their boat, Thorpe and his team begin gathering supplies, which consist of duct tape, liquid nails, paint and a lot of cardboard. Typically they will construct a few miniature designs to see what direction they want to go, and then the set up begins. And although they typically put in more than 100 hours of work, and a lot of dumpster diving, “It’s a good time for a great cause,” Thorpe says.

However his participation in the event doesn’t revolve solely around making a successful boat. Thorpe and his team are also adamant on raising money for The Food Bank in addition to participating in the race. Their hard work continually pays off. The last two years Thorpe and his team have received the “People’s Choice Award” for raising the most money.

The race itself is a fun and lively environment filled with creative boats, costumes and themes. However, Thorpe said his favorite part of the event is getting to work with the kids. His team is always sure to set up a table of activities next to their boat prior to the race. Last year, they constructed their boat as a dragonfly; therefore, they had some dragonflies in an aquarium, along with pipe cleaners and crafts so kids could make a dragonfly of their own. 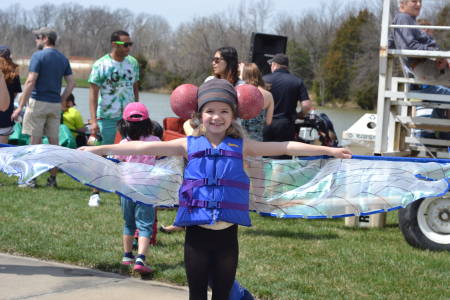 During the 2014 Float Your Boat Regatta, Thorpe and team included Eva Martin as their dragonfly mascot.

Thorpe does his best to encourage people to participate in the event each year. “It seems terrible that here we are in a first-world country, and we have people that are hungry. There are people that don’t have any food or means to get it, and the event is really about making sure people get fed,” Thorpe says.

He and his team are already bouncing around ideas for this year’s Float Your Boat race, which will be held April 25 at Bass Pro Shops Lake in Columbia. The registration has already opened at floatforthefoodbank.org, and will continue until March 12. Numerous awards are given out, and if you’re a land lover there are still ways to donate and show your support for the cause.