Is a troublesome fish in the U.S. ready for prime dinner time? A taste test at the University of Missouri suggests it is.

MU Campus Dining Services, in collaboration with Mark Morgan, an associate professor in the School of Natural Resources, tried three dishes using Asian carp to see if students, faculty and staff would consider eating the invasive fish that is spreading through Midwestern rivers, displacing native species. Morgan is seeing if diners can overcome the fish’s awful reputation and accept it as a new food. A commercial fishing industry based on carp would create jobs and reduce the numbers of the fish. 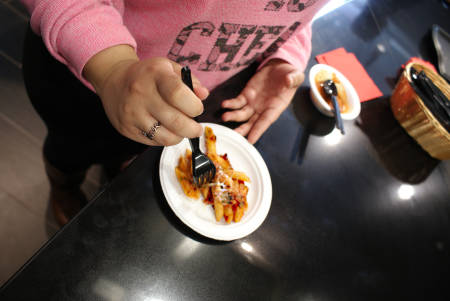 Ground carp is a cheap protein that sells for under $1.99 a pound. Previous taste tests at MU ranked carp as tasting better than catfish.

By a good margin, the chowder was the crowd’s favorite, followed by the pasta. The stew came in last. “No one disliked the stew,” said Tim Wall, helping Morgan collect the taste test data. “It was more so-so for the stew, perhaps because everyone so liked the chowder.”

The chowder scored perfectly with the crowd, many saying they would buy the dish in a restaurant for $5. A few scored the chowder at being worth more than $5. 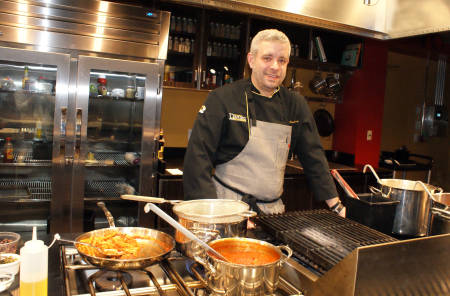 Not That Other Carp

Asian carp are often confused with the common carp, a bottom-feeding fish. Asian carp is said to taste more like cod, but not many consumers know that, Morgan said. In his earlier taste tests, Asian carp outpolled catfish. Catfish is the most commonly eaten fish in Missouri.

An advantage of Asian carp is how healthy it is. Morgan found it was lower in mercury than tuna. It also tested lower than other fish in chemical compounds and toxins. Low in fat and high in protein, it is heart healthy. It has more omega-3 fatty acids than salmon, according to Morgan’s research.

At $1.99 a pound, it costs substantially less than ground beef. “Plus, it’s more environmentally friendly than other sources of protein,” Morgan said. “Every fish consumed is one fewer one that is displacing a native species.”

During the 1970s, plankton-eating silver and bighead carp were imported to control algae in wastewater treatment lagoons and commercial fish ponds. In the 1980s they escaped into the wild.

Today, carp are well-established in Midwestern rivers, where they can reach extremely high numbers, competing for habitat with native catfish and sturgeon. Carp have been captured from South Dakota to Louisiana, Minnesota to Ohio. The Lake Sturgeon, Niangua Darter, Pallid Sturgeon and Shovelnose Sturgeon are native fish on the endangered or threatened species list, at least in part because of the loss of habitat to the carp.

After the taste test results are further analyzed, the carp dishes may show up in one or more of the Campus Dining restaurants.