Scientists all over the world are looking for ways to use switchgrass as an effective biofuel. They should speak with Tim Reinbott, who has been doing that all winter.

Reinbott, superintendent of the Bradford Research Center, east of Columbia, has substituted switchgrass bales for wood in the furnace that heats the center’s administration building. The fuel is more than cheap – it’s free; harvested on the property.

Reinbott has done more than just chuck the grass into the furnace and enjoy the warmth. He’s evaluated its economic and environmental aspects and found several advantages.

He discovered, for instance, that the BTU output of baled switchgrass is about the same as cordwood, per equal weight. He also measured the energy output of a ton of switchgrass and found it was equivalent to about 200 gallons (1,660 pounds) of propane. 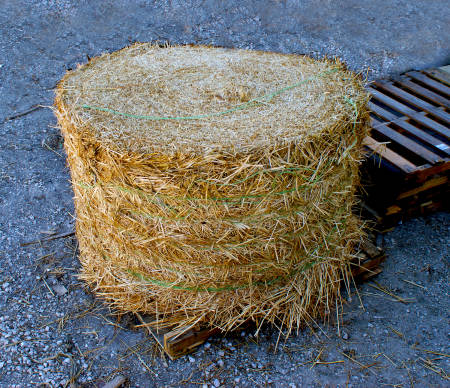 Baled switchgrass burns at about the same temperature and burn duration as wood, so there is no diminishment of comfort or convenience. Matt Volkmann, agricultural science research technician for the USDA’s Agricultural Research Station in Columbia and who originally suggested experimenting with baled switchgrass, found that on a typical cold winter day a 250 pound half-bale in the morning and another in the afternoon keeps a large building sufficiently toasty – about the same as with cordwood.

Unlike cordwood, Volkmann and Reinbott also found that there was significantly less ash residue with switchgrass than wood. Reinbott last year experimented with discarded wooden pallets in the furnace and found, that while they burned well and were cheap, they produced fairly large amounts of ash and nails that had to be cleaned out and discarded.

“Ash produced from burning switchgrass is not only less in volume, but it is powdery, making it easier to dispose of,” Reinbott said. “Switchgrass ash also is high in minerals, so we spread it back into the soil as a free fertilizer.”

That gives switchgrass an advantage over cornstalks, another waste product burned on many farms to produce heat. “Switchgrass is a perennial that translocates nutrients back into the soil in the fall,” Reinbott said. “Corn is an annual that uptakes and keeps the nutrients. We would rather put the cornstalks back onto the soil to replenish the earth.”

Reinbott has compared the energy yield of baled switchgrass to pelletized switchgrass, an emerging use of the material, and found that while pellets do produce a little more heat and for a longer period, that isn’t the full story.

“Remember, you have to expend energy to make and transport the pellets,” Reinbott said. “Compared to the simple harvesting and baling of the switchgrass, I think this is a neutral energy comparison, but there certainly is a cost saving by burning bales.” 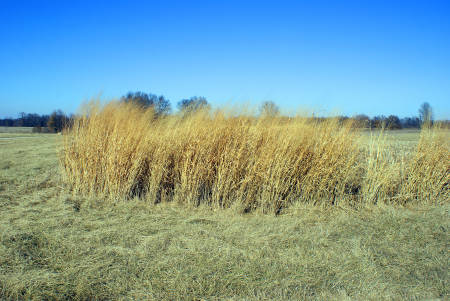 Switchgrass is a hardy, deep-rooted warm season grass that grows from Canada to Mexico. It is found wild in prairies, along roadsides and streambeds. It is often used by farmers for soil conservation, forage production as animal feed, game cover and as an ornamental grass. In warm and humid climates switchgrass has the ability to produce 25 tons of material on 100 acres.

Switchgrass is a great way to improve the environment, Reinbott said. Research at Bradford shows that just planting it will enhance erosion control, slow nutrient runoff and provide ground cover for wildlife. Also, switchgrass has the ability to absorb pesticide residue from the soil.

Since the 1980s it has been researched as a renewable energy crop, mostly as cellulosic ethanol.

In the last decade interest has increased to using switchgrass as a source of thermal energy. In most of these applications, switchgrass is pressed into pellets that are burned in stoves designed for the pellets. Switchgrass pellets have been widely tested as a substitute for coal in power generation, too.

Scaling Up for Fewer Emissions

The furnace at Bradford is typical of those used on many farms and rural businesses. Reinbott said there is no reason the system can’t be scaled up to small commercial power plants looking to reduce carbon emissions from coal. Several power plants, including the MU Power Plant, are adding wood chips to their coal stream. 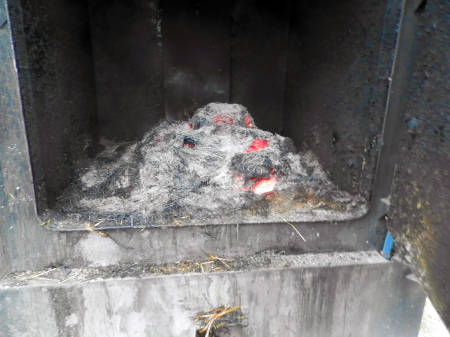 Switchgrass burns to a fine ash.

Important for a working farm, Reinbott’s baled switchgrass has also reduced the workload of heat generation. “Swichgrass is actually a time saver as we don’t have to go out and cut the wood, load it into a truck and stack it at the furnace,” Reinbott said. “We’re creating an energy product by expanding what we are doing already.”

Next winter Reinbott and Volkmann will take their research to the next step by blending other environmentally useful grasses into the mix destined for the furnace.