Researchers at the University of Missouri have determined that an enzyme known as MMP12 does not remain outside of cells while it fights infections, but rather it travels all the way into the center of them.

Understanding this function is an important step to creating treatments for inflammatory diseases. Sometimes, these enzymes accidentally damage tissues in inflammatory diseases such as chronic obstructive pulmonary disease, cancer and heart disease. The enzymes’ destructive roles were little understood until it was discovered that they worked inside, rather than outside, the cell.

“As a part of the human immune system, white blood cells create a number of enzymes that help fight disease,” said Steven Van Doren, a professor in the MU Department of Biochemistry and principle investigator in the research. “Scientists believed these enzymes remained on the outside of cells. Now we know the MMP12 enzyme can bind to cells and travel all the way to the nucleus at the center of a cell. With this knowledge we can begin further study of how this enzyme interacts with those cells. Ultimately, increasing this understanding may lead to the creation of treatments to turn off this enzyme, and others like it, when they are damaging the body.”

Enzyme MMP12 can be found in elastin, which is an elastic tissue found in the lungs and arteries that allows organs and blood vessels to resume their shape after stretching. When there is unwanted MMP12 action in the lungs and arteries of smokers, it breaks down the elastin, causing the lungs or arteries lose their shape elasticity. This leads to inflammation in those areas, which can cause diseases like chronic obstructive pulmonary disease and diseases of the arteries. 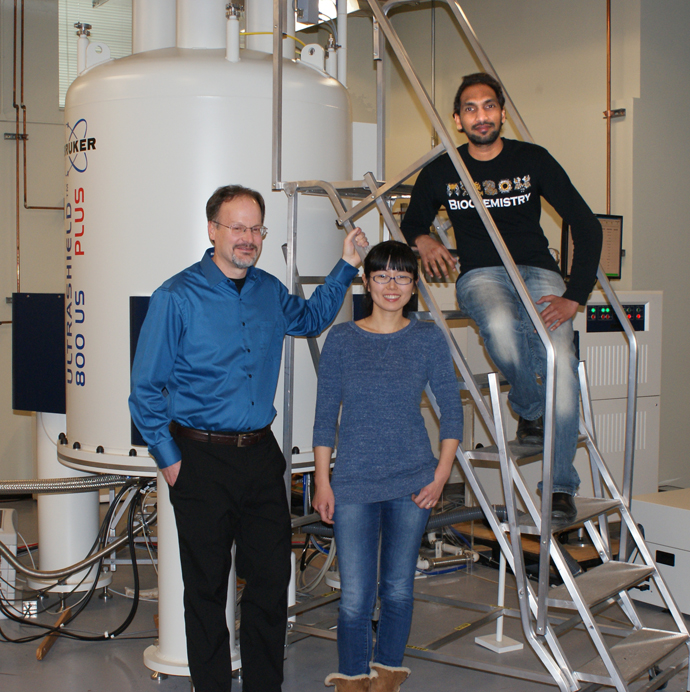 For his study, Van Doren introduced a fluorescent substance to MMP12 enzymes, which caused them to glow. Using a technique called magnetic resonance spectrometry of atoms’ nuclei, or NMR, which is similar to magnetic resonance imaging (MRI), Van Doren was able to study structural details of how these enzymes interacted with cells on a sub-microscopic scale.

“We know that MMP12 enzymes play important roles in fighting bacterial and viral infections and fighting arthritis,” Van Doren said. “The more we understand these enzymes, the closer we come to learning how to use these enzymes more effectively to fight diseases while preventing them from causing damage when they act inappropriately. This illustrates the importance of basic scientific research when looking to solve large, practical problems. One next step is to determine how these enzymes get through the cell. Understanding that mechanism will tell us much about how these enzymes work. ”

The Department of Biochemistry is affiliated with the MU College of Food, Agriculture and Natural Resources and the MU School of Medicine. This study was funded by a grant from the National Institutes of Health and has been published in Nature Communications.

The early-stage results of this research are promising. If additional studies are successful within the next several years, MU officials will request authority from the federal government to begin human drug development. If this is granted, researchers may conduct human clinical trials with the hope of developing new treatments for diseases.

Get a tour of MU’s magnetic resonance spectrometer here.