The University of Missouri has unveiled a prototype small-scale anaerobic digestion system that produces biogas from pig manure. The biogas can be used to heat a farm and create electricity. The device also reduces odor from swine operations.

“What we want to do is improve and fully utilize all the biogas for energy production,” said Teng Lim, Extension Ag Systems Management associate professor.

Funded by the MU College of Agriculture, Food and Natural Resources, the anaerobic digester consists of three tanks. Manure from the hog barn pit is pumped into one tank where the manure is stored and mixed. The anaerobic digestion takes place in the other two tanks, where bacteria break down the manure in these warm and oxygen-free tanks.

The biogas from the manure can be used for electricity and hot water production. With some further treatment it can also be stored as a compressed natural gas, for heating or even vehicle fuel. 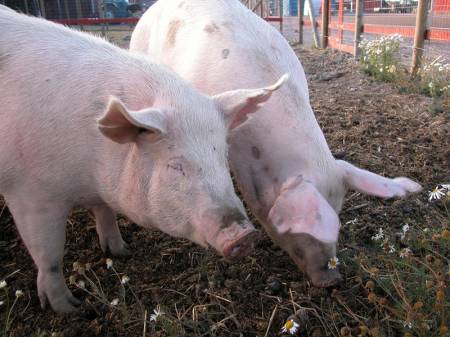 Lim says a larger scale digester could supply a farm’s energy needs and also be sold to the grid to provide electricity to the community.

There are other benefits to anaerobic digestion in addition to energy generation. The digested manure retains the nutrients to be good fertilizer while becoming a more consistent product. Also, the digester can reduce odor emissions.

“When the manure is treated by the digester process the odor concentration is significantly reduced,” Lim said. “There is still going to be odor, but it’s going to be much lower and less fluctuation than the raw manure.”

A Lot of Pork

The swine industry is big in the United States – there are 73,150 pork farms in America with 120 million pigs marketed each year.

Before the 1960s, most pork in the U.S. was raised in outside lots or on pasture systems. With the development of slotted floors and liquid manure handling equipment, it became possible for producers to more easily care for larger numbers of animals. Enclosed buildings overcame most weather problems and predators, and minimized the potential pollution from outside lot runoff.

Typically, pig odor is a localized air quality problem, with low concentrations of odorous gases such as p-cresol. Odor problems are often a starting point for litigation. Many farmers can go out of business just fighting a lawsuit.

An Important Part of Future Farms?

There are challenges to anaerobic digestion, the biggest being cost and management. In a commercial setting the digester would be 100 times larger than the one at MU’s swine research facility.

Lim pointed out that industry leaders and scientists believe anaerobic digesters will be an important piece of future farms, both to mitigate odor and for generating renewable energy.  The cost is a major obstacle now. The team is working closely with industry experts from Martin Machinery, a Missouri company who specializes in biogas generators and control systems.

MU researchers are using the scaled down digester to find ways to make digesters more affordable and easier to manage. They are also using it as an education tool to show producers the potentials, what it takes to process the manure, and to train people how to properly run a system like this.