You may get more than you expected when you buy a used combine out of state.

Palmer’s amaranth seeds may travel across state lines with the combine, said Kevin Bradley, associate professor of plant science at the University of Missouri College of Agriculture, Food and Natural Resources.

“Know where your feed, seed and equipment come from,” he continued. “It is not by accident that you see Palmer amaranth growing around hay bales, feedlots and near places where you have cleaned out your combine.” 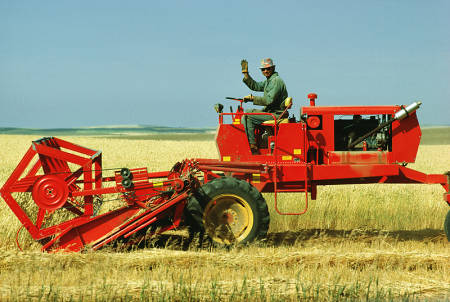 The weed can unknowingly be brought across state lines via used equipment, hay, straw and feed. Bradley considers Palmer amaranth the number one weed to watch in Missouri, and he recommends exercising caution when bringing in materials from outside Missouri or from the Bootheel, where Palmer amaranth predominates.

Bradley said Palmer amaranth is “not a weed for the faint of heart.” It is aggressively moving from the southern United States into the Midwest and north-central U.S., including locations in the northern half of Missouri.

The plant became resistant to glyphosate herbicide, the most-used weed control method in the state, about three years ago. Each plant can produce as many as 300,000 seeds per plant and can grow up to 7 feet in height.

It keeps soybean plants from growing by shading them. Its extensive root system robs plants of nutrients and water. The summer annual can reduce soybean yields by as much as 79 percent.

It is hard to identify Palmer amaranth in its early stages of growth. Many species within the pigweed family look similar. Palmer amaranth seedling cotyledons are narrow and green to reddish in color. Mature Palmer amaranth plant petioles are usually longer than the leaves. The leaves have a poinsettia-like arrangement when viewed from above. It is easier to identify by its towering seed head at the end of the growing season, but by then it’s too late.

Corn and soybean producers must control the weed by integrating cultural control practices like narrow row spacing, cover crops and tillage where appropriate in combination with multiple herbicide modes of action, especially in the form of pre-emergence herbicides.

“This cow’s out of the barn and I don’t know that we can ever close it,” Bradley said. “But we should try.”