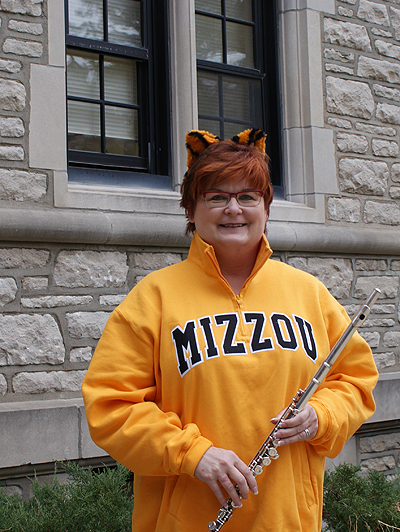 Johanna Reed Adams, John Tummons and other Mizzou alumni have found a fun way to support their alma mater.

Reed Adams, community leadership development state specialist, is on the Board of Directors of M2AB – Marching Mizzou Alumni Band. Tummons, instructor of agricultural education and leadership, is also a member. Anyone who marched for one semester in Marching Mizzou is eligible to be part of the organization, which performs a pre-game show each year at Homecoming, and fills in for the current band when they have to be in too many places at one time – at basketball games when Marching Mizzou is traveling for a football bowl game, for example.

“I’ve enjoyed camaraderie with band members I marched with in undergraduate school,” said Reed Adams, who has been part of M2AB since graduating with her B.A. in political science in 1981. She also has an MPA and a Ph.D. in educational leadership and policy analysis from the University of Missouri.

“Marching Mizzou provided me with a family at Mizzou as a freshman,” she said. “I’ve made lifelong friends as a result. It is an avenue to support my alma mater.” Reed Adams plays the flute with M2AB, as well as with her church and, in the past, with the community band in Moberly.

Tummons, a tuba player, has been involved for 14 years and enjoys the chance to connect with old friends during the alumni performances.

A Rush Just Being on the Field

“Many of my closest friends in college were fellow Marching Mizzou members because we spent so many hours together practicing, marching or traveling to away games,” Tummons said. “I also enjoy the rush of getting to march on the field for pregame.”

Schiller Fusco said M2AB’s focus is also to provide service to Marching Mizzou. They host a BBQ for current band members before their concert on the quad, provide scholarships for current members and have also done a senior lunch. They are directed by Gary Taylor, a Mizzou alum from Columbia.

Although M2AB has members all over the country, Schiller Fusco said it has become harder and harder to recruit younger alumni to join, an issue that is not unique to just their alumni organization (M2AB is an affiliated member of the Mizzou Alumni Association). They are looking at different ways to attract younger members and welcome any suggestions.

Reed Adams and Tummons both said they recommend anyone who has participated in Marching Mizzou to consider joining M2AB.

“You’ll meet committed and dedicated Marching Mizzou alumni and share experiences from the past and present,” Reed Adams said.

“Marching is a fun way to celebrate homecoming!” Tummons said.