Research at the University of Missouri has characterized mutant proteins responsible for a type of glycogen storage disorder in humans. The work could help with patient diagnosis and development of therapeutic options for associated hypoglycemia, muscle disease and hormonal abnormalities inked to this inherited disease.

Glycogen storage disorders, which affect the body’s ability to process sugar and store energy, are rare metabolic conditions that frequently manifest in the first years of life. Often accompanied by liver and muscle disease, this inability to process and store glucose can have many different causes, and can be difficult to diagnose. 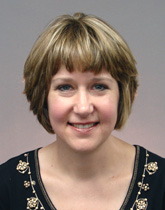 “In February of this year, I found an article in the New England Journal of Medicine (NEJM) that caught my eye,” said Lesa Beamer, associate professor of Biochemistry and Chemistry and at MU. “It was a landmark study identifying a new, inherited metabolic disorder in humans called phosphoglucomutase 1 (PGM1) deficiency and affects the human versions of the very same enzymes I had studied.”

The NEJM study was the first to characterize the multiple effects of the disorder in humans and pinpointed the enzyme involved. The disorder, described initially in 21 patients, is considered rare but will likely be found more often now that genetic tests have been developed.

According to the study, the disease often affects patients in early childhood or adolescence and can cause liver disease, developmental abnormalities and cardiac problems. Many patients exhibit exercise intolerance and, because the condition could not previously be diagnosed, these problems sometimes lead to early deaths.

Beamer’s lab researches similar enzymes in bacteria that play important roles in carbohydrate (sugar) metabolism, including sugars like glucose. These enzymes perform the same chemical reaction as the human protein involved in the newly identified inherited disease and share many other similarities.

“Once the disease involving the human equivalent had been identified we were able to put the knowledge we’ve gained to immediate use,” Beamer said. “Using the information provided by the NEJM study, we recreated the mutated proteins that cause the disorder in a test tube and conducted detailed biochemical analyses. Our study was the first to systematically characterize and index these mutant proteins for comparison with the symptoms in human patients. Because patient studies are complex and time consuming, our biochemical analyses are proving essential to understanding the complicated clinical presentation of this inherited disorder.”

The early-stage results of this research are promising. If additional studies are successful, Beamer believes that her bacterial enzyme research could assist with patient prognosis, as well as the design of targeted therapeutics. Her lab currently is collaborating with clinicians to “fast track” further research.

The study, “Compromised catalysis and potential folding defects in in vitro studies of missense mutants associated with hereditary phosphoglucomutase 1 deficiency,” was funded in part by the National Science Foundation and was published in The Journal of Biological Chemistry.