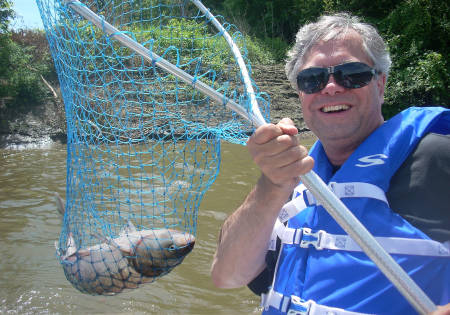 Mark Morgan and the subject of his research, the Asian carp.

Asian carp are creating havoc in Midwestern rivers. The invasive fish is usurping habitat of native species in the Missouri and Mississippi river basins, and threatening to enter the Great Lakes. The easily scared carp even injure recreationists when the fish leap out of the water at the sound of a boat motor.

Conservationists haven’t yet found a solution to slow their spread, but Mark Morgan, an associate professor in the School of Natural Resources at the University of Missouri, has an idea to fight back: If you can’t beat ’em, then eat ’em.

With help from a Mizzou Research Council grant, he and his research team have identified a commercially viable boneless carp product, conducted a taste test on campus, compiled tasty carp recipes and test marketed the product at local restaurants and grocery stores. His mission now is to get people to overcome their reluctance to try the fish. 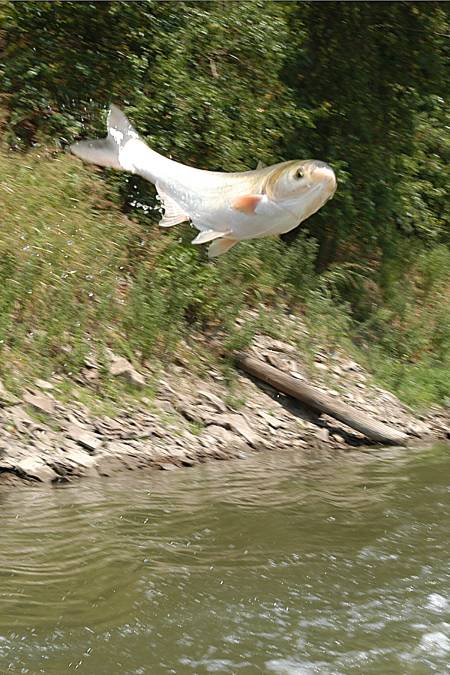 He’s confident that he will have diners hooked. The creation of a commercial carp fishing industry on the Mississippi and Missouri Rivers could help control numbers of the troublesome fish.

Carp are not indigenous to North America, yet five known species from China are now in the U.S., Morgan said.

“The invasion began in the 1830s when carp were brought over as cheap protein to feed immigrant populations,” he continued. “The immigrants politely refused. During the 1970s, plankton-eating silver and bighead carp were imported to control algae in wastewater treatment lagoons and commercial fish ponds. In the 1980s they escaped into the wild.”

Today, carp are well-established in Midwestern rivers, where they can reach extremely high numbers, competing for habitat with native catfish and sturgeon. Carp have been captured from South Dakota to Louisiana, Minnesota to Ohio. The Lake Sturgeon, Niangua Darter, Pallid Sturgeon and Shovelnose Sturgeon are native fish on the endangered or threatened species list, at least in part because of the loss of habitat to the carp.

In 2007 the Department of the Interior declared all silver carp to be an injurious species. In 2012 Congress directed the Corps of Engineers to speed up strategies to protect the Great Lakes from Asian carp.

Stopping invasive carp from spreading into Lake Erie is critical as that lake is the ideal habitat for their population to explode, Morgan explained. “This could lead to carp choking out the native fish, and potentially collapsing a multi-billion dollar fishing industry.”

Eating carp may be a practical solution to stop the invasion, but the fish are a hard sell to American diners. 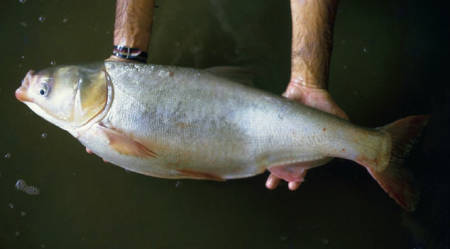 “Carp won’t take bait easily, so you have to net them,” Morgan said. “Given how they leap out of water and injure people, traditional fishermen avoid them.”

Carp are bony fish, too. In China, where Asian carp are a delicacy and have been cultivated as a food source for more than 1,000 years, children are taught to eat around the bones. “Americans don’t want to mess with bones for fear of choking,” Morgan said.

Asian carp are often confused with the common carp, a bottom-feeding fish. Asian carp is said to taste more like cod, but not many consumers know that, Morgan said. In his taste tests, Asian carp outpolled catfish, Morgan said. Catfish is the most commonly eaten fish in Missouri. 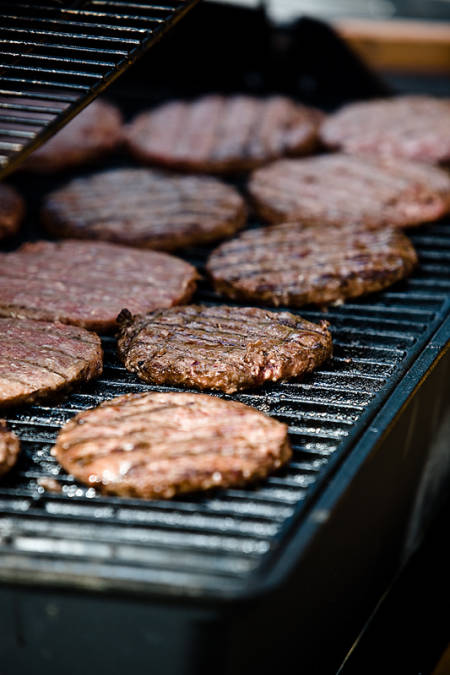 Morgan’s team is working with Schafer Fisheries in Illinois, which developed a process to mostly debone the fish. Rather than market fillets containing small Y-shaped bones, Morgan has centered his efforts on ground carp. Here, the fillets are pressed against a wire mesh leaving the skin and bones on one side and flesh on the other.

“Think of ground turkey,” Morgan said. “With only a slight fish flavor.”

An advantage of Asian carp is how healthy it is. Morgan found it was lower in mercury than tuna. It also tested lower than other fish in chemical compounds and toxins. Low in fat and high in protein, it is heart healthy. It has more omega-3 fatty acids than salmon, according to Morgan’s research.

At $1.99 a pound, it costs substantially less than ground beef. “Plus, it’s more environmentally friendly than other sources of protein,” Morgan said. “Every fish consumed is one fewer one that is displacing a native species.”

Onto the Grocers’ Shelves

Morgan has entered the next phase of his carp campaign by test marketing the product in Columbia, Missouri, supermarkets. Moser’s Discount Foods sells frozen ground carp alongside other specialty foods like frog legs and pork chitterlings.

Morgan joined in the unveiling by making some carp chili for customers to sample. “Many said they liked it and said it didn’t taste fishy,” Morgan said. In the first week, Moser’s sold 73 pounds of the product.

Morgan has been collecting carp recipes that include fish tacos, tempura, con queso, chowder, omelets and burgers. “I’ve tried several applications and they all taste great,” he said.

His next step is to get local chefs to try the fare and incorporate carp into their menus.

“Carp won’t win any beauty contests and that’s a problem,” Morgan said. “They’re kind of ugly. The only way to get over the fear of eating carp is to face it and eat one.”