In the 1930s a media sensation was centered in little Marshall, Missouri. A hunting dog named Jim was astounding townspeople and press alike with an uncanny ability to identify objects and people, predict the gender of babies before birth, and respond to questions spoken in a foreign language.

To determine what was really going on with the dog, his owner sought out the director of veterinary science at the College of Agriculture, University of Missouri, where tests were conducted to determine if it was all a hoax or if the dog really did have powers beyond human comprehension.

The Runt of the Litter Becomes a Wonder Dog

Jim (1925–1937) was a Llewellyn setter born in Louisiana on March 10, 1925, one of a litter of seven pureblood champion field pups. Though his litter mates sold for $25 each, a princely sum then, Jim was considered slow and homely, and was almost put down. 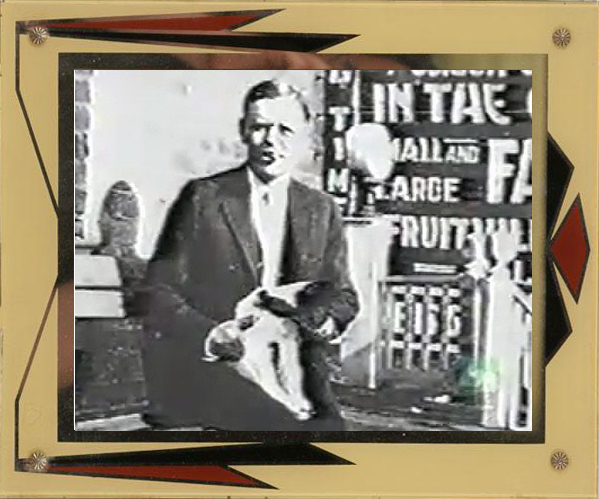 As a gag, a friend gave the clumsy pup to Sam Van Arsdale, an expert hunter who owned several prized hunting dogs. Jim seemed hopeless. He would lie in the shade while Van Arsdale trained his other dogs. When taken on a real hunt for the first time, however, Jim immediately went to a covey of quail, came to a perfect point, held steady until a bird was shot, and immediately brought the prize to Van Arsdale.

Jim proved a marvelous hunting dog, knowing where quail where and where they were not. Van Arsdale kept track of birds flushed by his now-beloved and handsome dog. He stopped counting at 5,000. Outdoor Life magazine named Jim “Hunting Dog of the Century.”

By accident, Van Arsdale discovered that Jim seemed to understand what he was saying. When Van Arsdale suggested that they should rest under a hickory tree, Jim went immediately to one even though there were numerous types around. Surprised, Van Arsdale asked Jim to go to a walnut, then a cedar, a stump and a tin can. Jim complied perfectly. 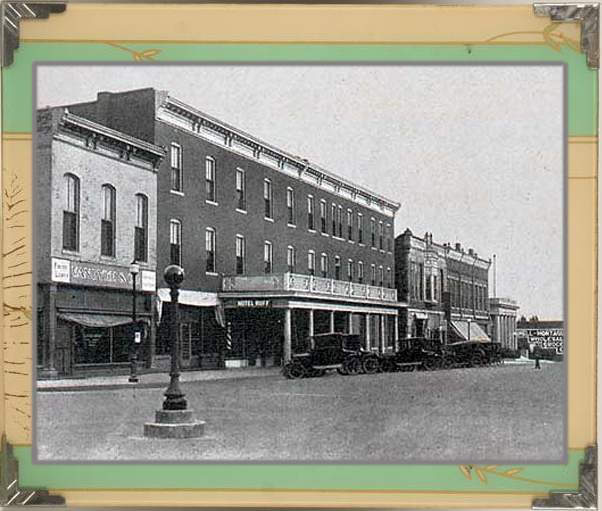 The Ruff Hotel in Marshall, since torn down.

“What made Henry Ford rich?” he asked. The dog walked over and looked at a Model T.

“What would I do if I had a stomach ache?” Van Arsdale asked next. Jim stood next to the town physician.

Someone in the crowd then shouted: “S’il y avait une Bible dans la foule?” Van Arsdale didn’t understand. Jim, however, trotted into the crowd and sat by a Methodist minister. Van Arsdale asked what was said.

“Is there a Bible in the crowd?” was the answer. With that, the pastor reached into his coat pocket and produced a small New Testament.

The Future According to Jim

Jim’s apparent powers didn’t stop at understanding commands. Contemporary press accounts indicate that he could foretell the future. For seven years in a row, it was reported, Jim was shown a list of Kentucky Derby entries, and he picked the winner each time before the race. 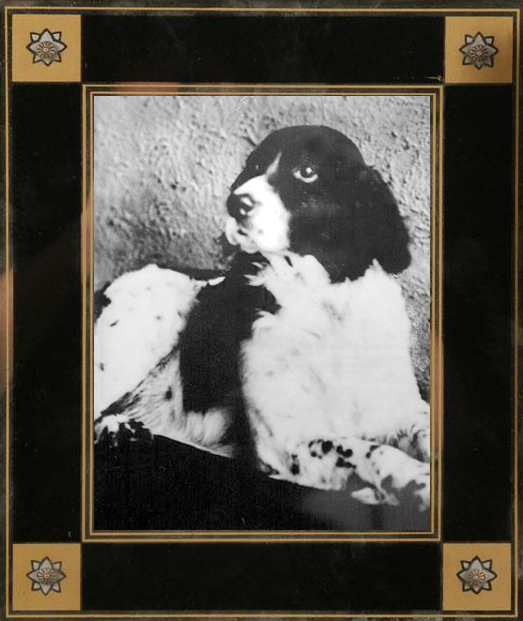 Expecting mothers asked Jim, now nicknamed Jim the Wonder Dog, to foretell the gender of the babies. The local newspaper reported both the birth announcements and Jim’s successes.

In 1936 during the playoffs, Van Arsdale, in the presence of the Missouri press, placed in front of Jim pieces of paper with the names of the teams. Van Arsdale asked who would win the series. Jim placed a paw on the word “Yankees.” Later events proved him correct.

Jim’s ability to understand foreign languages intrigued some Mizzou students studying Greek, who asked for a demonstration. According to witnesses, Van Arsdale asked that a request in Greek be written for Jim. A paper was placed in front of the dog, but Jim didn’t move.

Van Arsdale, embarrassed, apologized. The students chuckled, then one spoke up. “It says nothing,” he said. “It’s the Greek alphabet.”

That only made Van Arsdale more curious. He sought out the best scientific mind available to evaluate Jim. That was the respected A.J. Durant, chair of veterinary science at Missouri’s College of Agriculture.

The Professor and the Psychic Dog

Adrian Jackson Durant (1886-1980), born in Bromley, Alabama, graduated from MU with an agriculture degree in 1913 and master’s in 1915. He stayed at Mizzou as an Agricultural Experiment Station research assistant, where he began work on his Ph.D. He changed his mind and pursued a DVM degree, which he earned from Michigan State University in 1924. 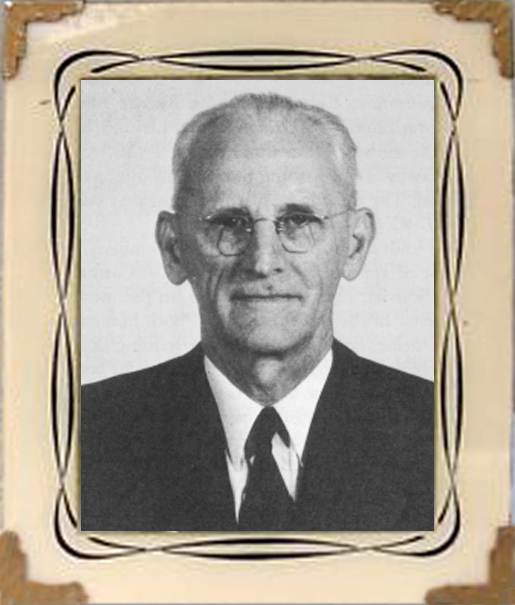 He returned to MU as an animal sciences professor. In 1931, he succeeded John Connaway as chair of the MU College of Agriculture’s Division of Veterinary Science.

Durant was a recognized researcher. He helped discover the trigger of Bang’s disease, which caused spontaneous abortion in cattle. After 10 years of study, Durant determined the method of transmission of a virus then killing chickens by the millions. The treatment for neurolymphomatosis, known as fowl paralysis, saved millions of dollars annually for the poultry industry. Durant found that canaries can contract leukemia, providing human medicine researchers a clue into the mechanism of that disease.

Durant was no milquetoast professor. His students described him as tough, data-driven and exacting. Even as an aged man he traveled to Alabama with his dogs to hunt wildcat. A March 1954 Missouri Alumnus magazine piece quoted him as saying he bagged 12 of them in 13 shots. He said his greatest thrill occurred in a swamp where he shot a cat ready to spring on him from a tree.

Durant decided to go all out on the study of Jim. Sherman Dickinson, another respected Mizzou College of Agriculture animal scientist, was recruited as well as several liberal arts teachers. Also participating were psychiatrists from Washington University in St. Louis. Paramount Motion Pictures caught wind of the deal and sent a newsreel crew to film the testing. 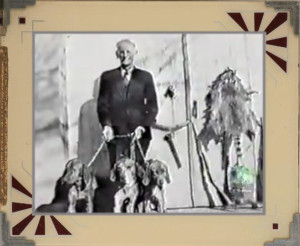 A.J. Durant was an avid hunter, as well as a respected veterinarian and researcher.

To start, Durant gave Jim a thorough medical examination. He found nothing unusual.

The next step was held on the Mizzou Quadrangle before a curious crowd. Van Arsdale began: “Jim, there is a professor here named Dickinson. Show him to us.” Jim did, proving Van Arsdale wasn’t using confederates.

A line of language professors stepped up. Surely, a hoaxer couldn’t master a half-dozen languages.

To make sure Van Arsdale wasn’t giving secret signals, he was told not to move – not even his eyes.

A MU professor asked in Italian to be shown an elm tree. Jim put his paw on the closest one.

Another directed Jim in French to point out a certain license number. Jim walked directly to the car.

The next, speaking in German, asked him to find a girl in a blue dress. He did.

Still another, in Spanish, asked the dog to find a man with a black mustache. Jim responded promptly. 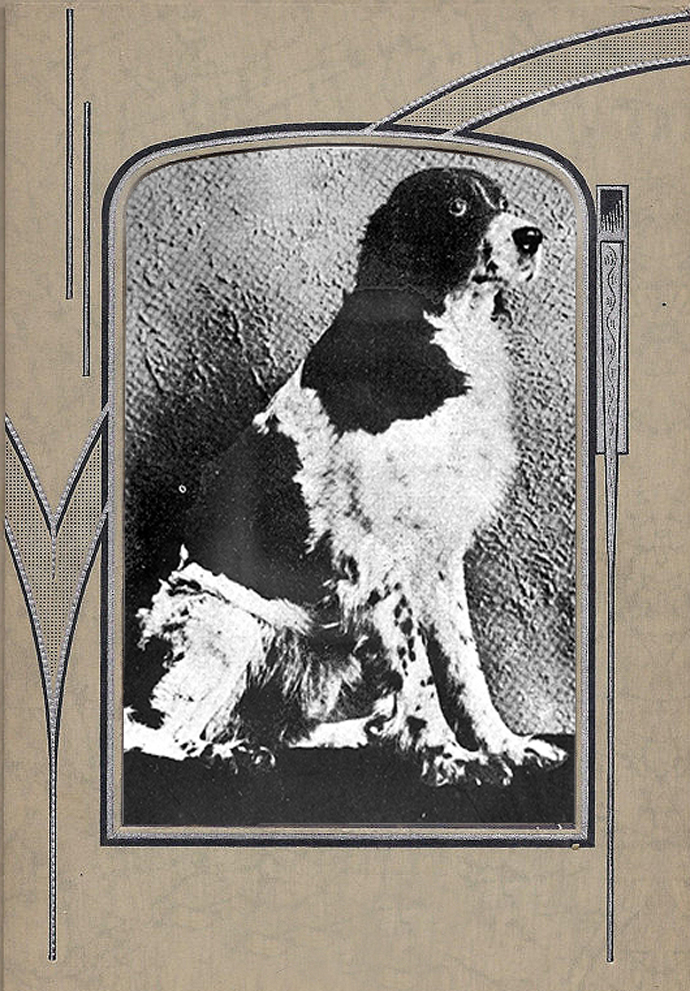 Jim the Wonder Dog during his 12th birthday party.

Witnesses reported that Jim accepted the proceedings calmly, and returned to sit quietly at his master’s feet until ordered out again.

Durant, who had been skeptical about the whole thing, was startled. Van Arsdale may have developed some elaborate scam, but not respected MU educators whose reputations were on the line.

Tests continued and Jim missed only one. A faculty member asked him to find a boy who had just had a permanent wave made to his hair. The embarrassed kid ran away before Jim could get to him.

The Washington University psychologists basically shrugged, and said there was no evidence that dogs couldn’t read minds.

The professors conferred. Speaking with the weight of the University of Missouri, Durant announced that Jim possessed an occult power that might never come again to a dog in many generations. In later years, veterinary colleagues asked Durant if he had made a big joke out of the affair. Durant didn’t waver from his analysis.

The Mizzou study got the politicians intrigued, and Jim was asked to demonstrate his powers before a joint session of the Missouri State Assembly. He again successfully picked out the people and things, as commanded. He even obeyed an order in shorthand. But the thing that shocked everyone was when he responded to instructions communicated via Morse Code. Jim repeated his feats at the Missouri State Fair. Van Arsdale waived their honorarium.

Van Arsdale refused to take advantage of Jim’s ability through betting or product endorsements. In the depths of the Depression, Van Arsdale was offered $100,000 if he and Jim would appear in a movie. He declined. “Jim’s powers are beyond my comprehension. I do not care to commercialize on them in any way,” he said. 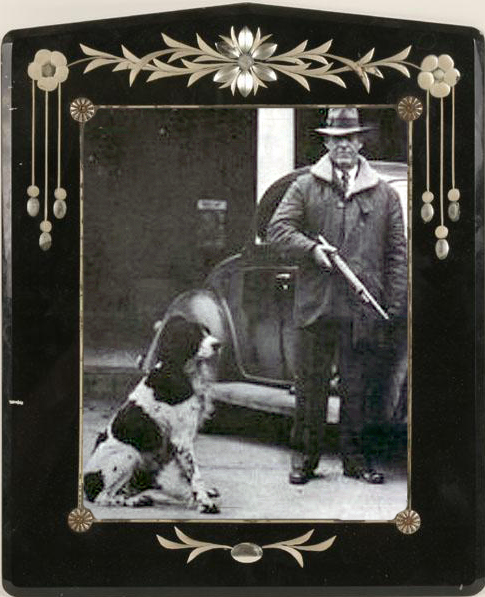 On March 18, 1937, Van Arsdale whistled for Jim, who leapt from the easy chair where he had been snoozing. The two got into Van Arsdale’s car and headed for a fishing trip at the Lake of the Ozarks. Jim had just celebrated his 12th birthday.

Parking the car, Van Arsdale opened the door and Jim jumped out. The dog ran a short distance, then collapsed. Van Arsdale sped him to a Sedalia veterinary hospital. The dog breathed only twice after being placed on the examination table.

As Jim was considered one of the family, Van Arsdale requested he be buried in the family plot in Marshall’s Ridge Park Cemetery. Authorities refused, so he was buried, in a specially built casket, just outside the cemetery gate. A crowd, with Durant and Dickinson attending, paid their last respects.

Since then, the cemetery has been enlarged and Jim’s grave is now within its fences, near the children’s section. Caretakers report that more people still visit his grave than any other in the cemetery, sometimes leaving coins and flowers on his headstone.

In May 1999, a park in downtown Marshall was built in Jim’s honor.  It features a bronze statue of Jim by Andy Davis, a Columbia sculptor. The park is located on the former location of Sam Van Arsdale’s Ruff Hotel.

The Animal Planet network aired a 2007 story on Jim. See it here.

You can sing along with the Jim the Wonder Dog Song here.