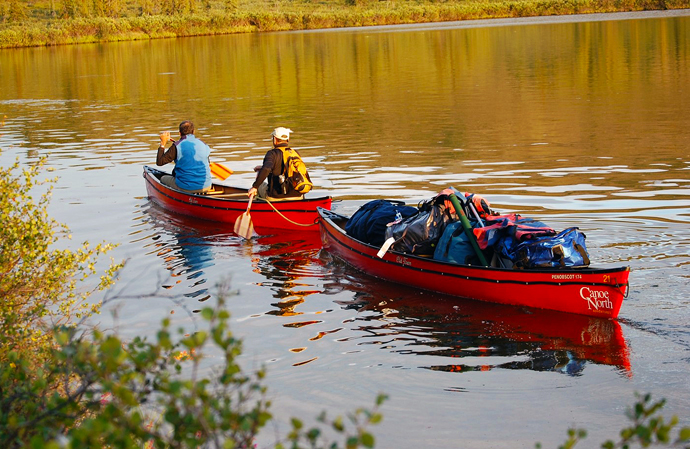 This past August Tom McFadden and Bill Lamberson made a float trip a little different than those usually made by Missourians. The director and associate director of the Division of Animal Sciences, with two companions, took a three-week, approximately 250-mile canoe trip above the Arctic Circle down the Horton River in northern Canada.

The trip is a rare one. Only about six groups a year make the journey, and the nearest village is 150 miles away from the river. The team saw no one else or any sign of civilization. In case of an emergency their only link to rescue was a satellite phone. 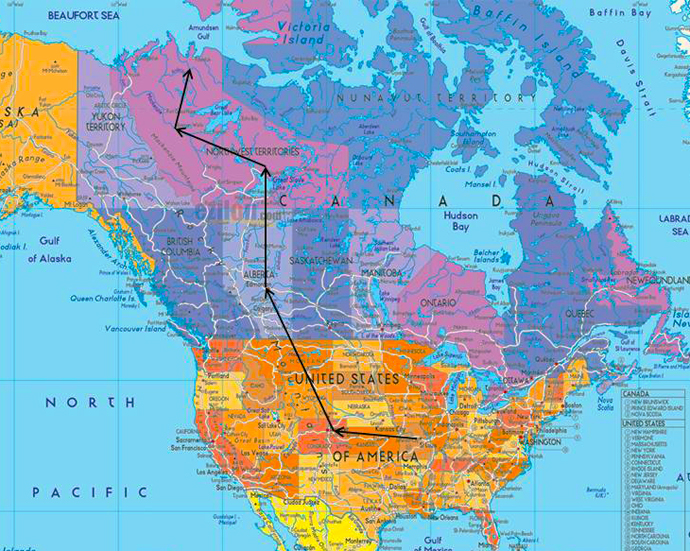 To get 150 miles above the Arctic Circle, Lamberson and McFadden took commercial flights from Columbia to Norman Wells in the Northwest Territories, Canada. 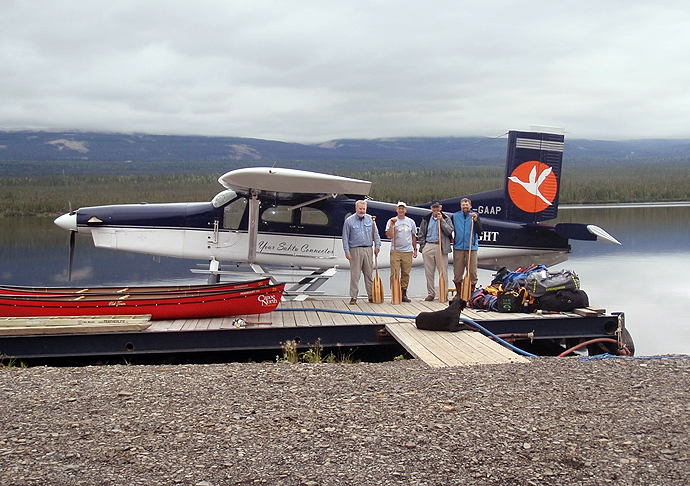 There, they boarded a bush plane for the flight north to the Whaleman Confluence of the Horton River, inside the Arctic Circle.

Everything for the trip had to be packed into the canoes, including tents, sleeping bags, food, cooking gear, rope and water purification filters. Food consisted of freeze-dried provisions, supplemented by lake trout and Arctic Grayling fish caught along the way. 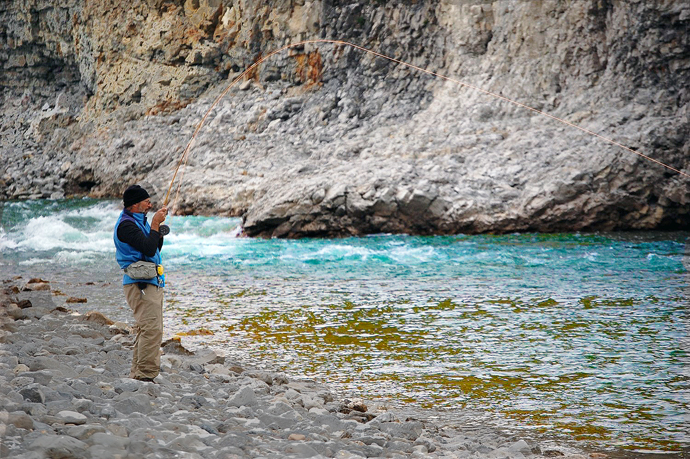 A typical breakfast was dried eggs and ready-to-eat bacon, oatmeal and coffee. Lunch often consisted of flour tortillas with either peanut butter and jelly or tuna. Dinner was freeze-dried meals, canned soups and chicken. The provisions and fish didn’t supply enough calories to make up for the exertion of hiking, paddling and cold wind. Lamberson said he lost 15 pounds during the journey. 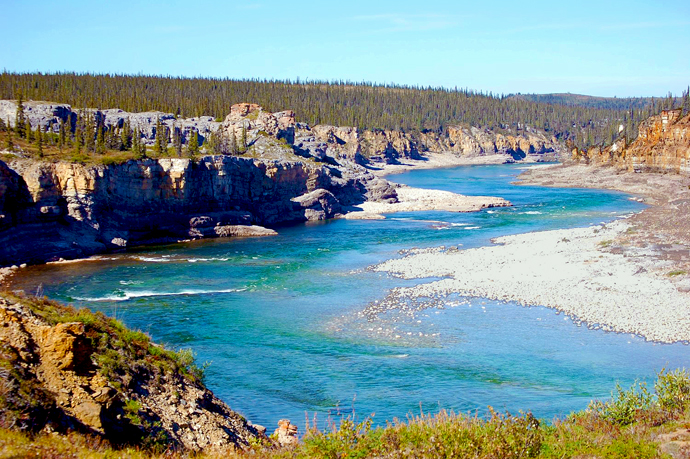 The Horton is the northernmost river in North America. Much of it lies within the Mackenzie Lowlands. The hilly topography is marked by numerous lakes and streams. Stands of trees line the riverbanks for the first 200 kilometers downstream of Horton Lake, yet virtually disappear as canoeists approach the coast. Even by Northwest Territories standards, the Horton is remote. The Inuit from Paulatuk, the nearest community, rarely travel this far. 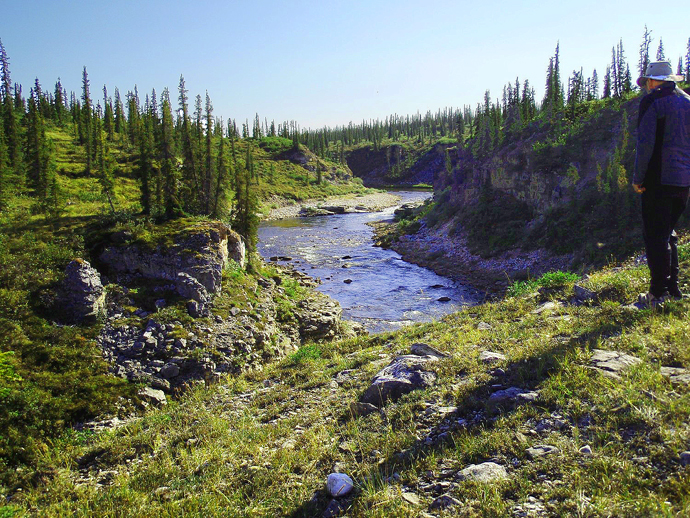 Much of the southern part of the river is bracketed by limestone bluffs. 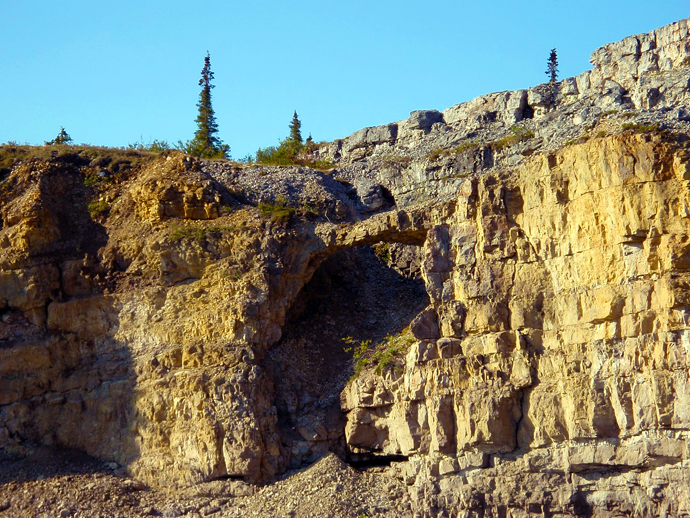 A range of ancient mountains hems in some of the river. The underlying limestone rock formation is part of a vast sedimentary arctic coastal plain. Birds of prey often perch on the canyon walls. 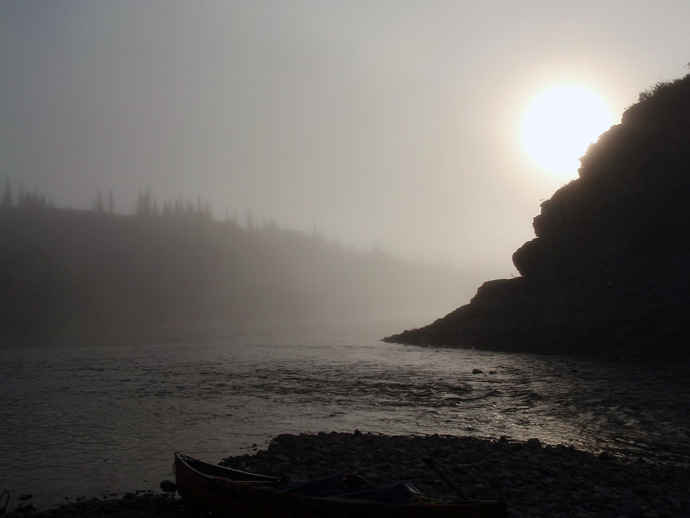 At this latitude during the late summer, the sun almost doesn’t set. The team experienced about 22 hours of daylight each day. The temperature ranged from 40 to 60 degrees in the day to below freezing at night. 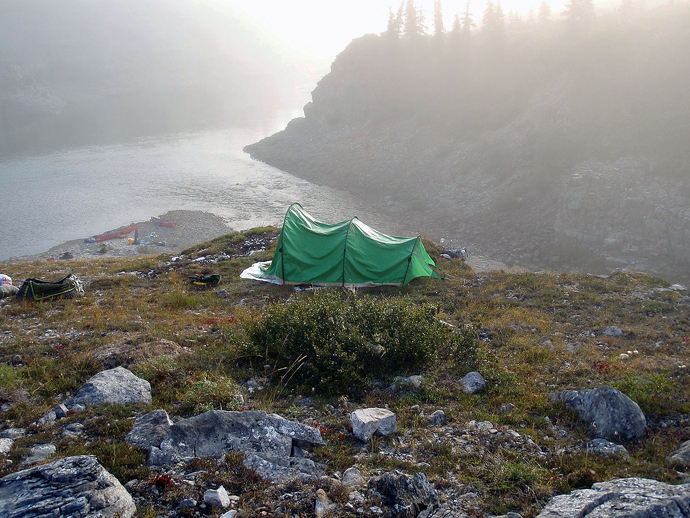 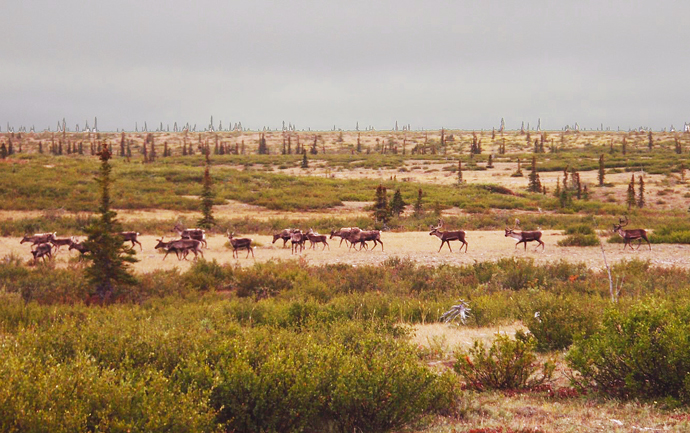 McFadden and Lamberson saw hundreds of caribou, along with arctic fox and grizzly bears. 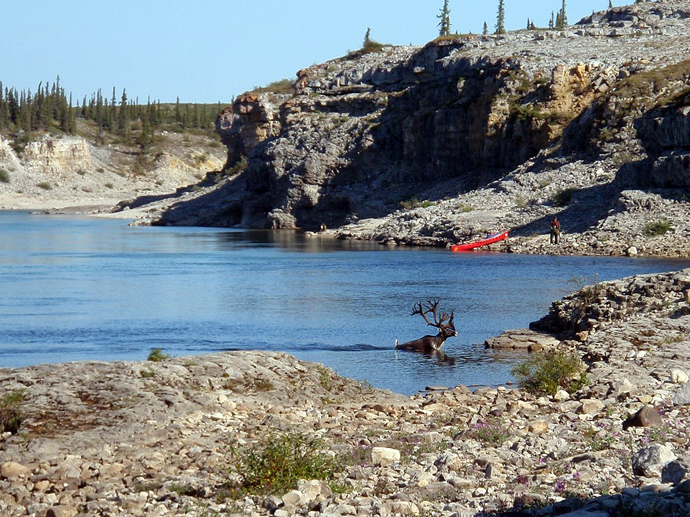 One caribou, swimming across the river, was startled to see the campers. Unable to reverse course, the animal continued on into the middle of camp, then quickly moved on his way. 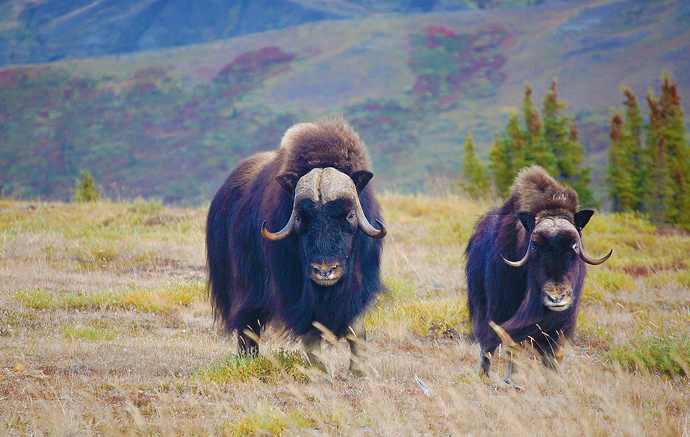 The team also got very close to the muskoxen who live on the tundra. 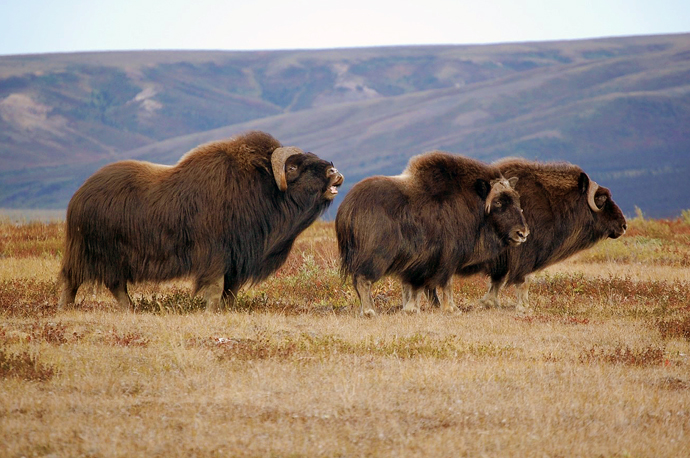 It was mating season for the muskoxen and Lamberson and McFadden, both animal scientists, photographed this bull’s courtship behavior called a Flehmen response. This lip curl is also commonly seen in rams and bulls. 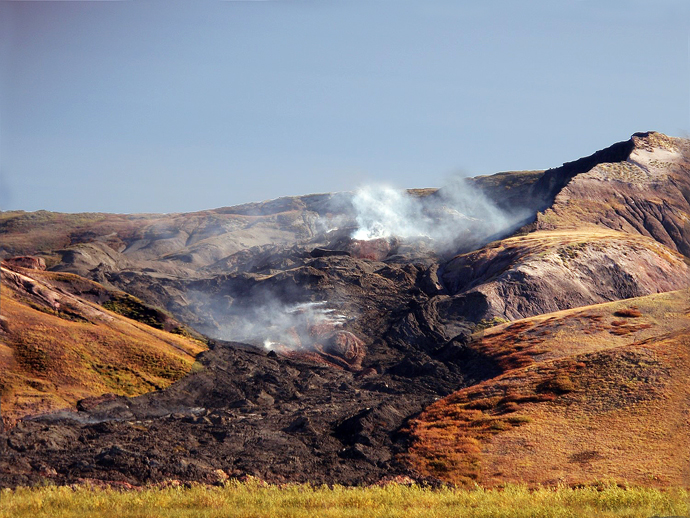 In the Badland Region of the Smoking Hills, the area contains deposits of magnesium and low-grade coal seams called lignite. As the landscape erodes, the coal seams are exposed and combust spontaneously emitting steady plumes of smoke from smoldering vents. These hills have been burning for thousands of years. 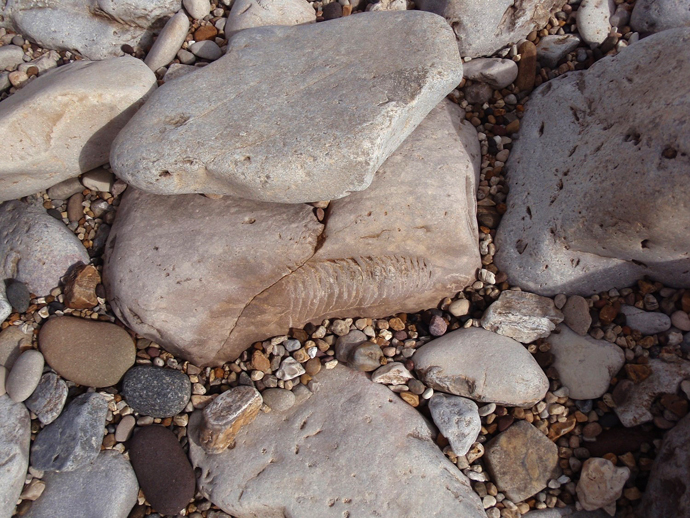 Fossils of ancient animals were easily found along the river. 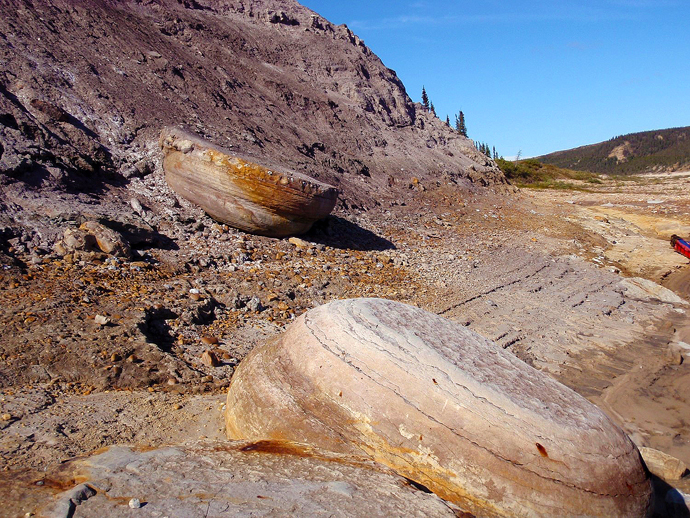 Along the river are strange rock formations created when the glaciers receded from this area, rolling boulders into round shapes.

Rocks, with heavy deposits of iron ore in them, exhibit signs of rusting. 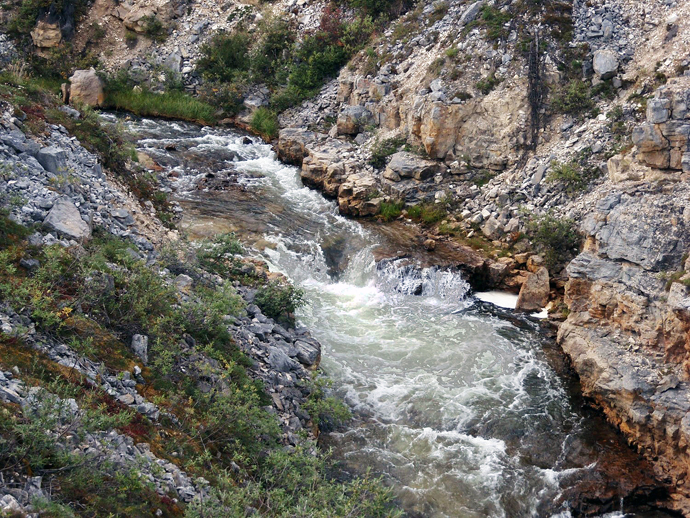 Parts of the Horton River are technically rated as whitewater. The canoeists had to portage around only one particularly fast stretch of rapids. 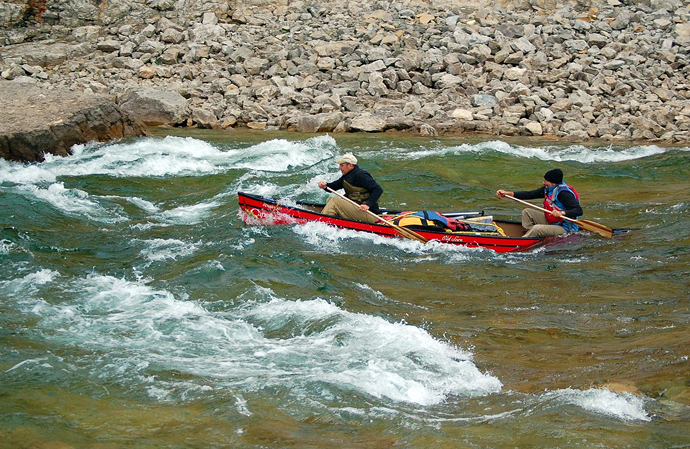 Lamberson, in the rear of the canoe, navigates a stretch of rapids. 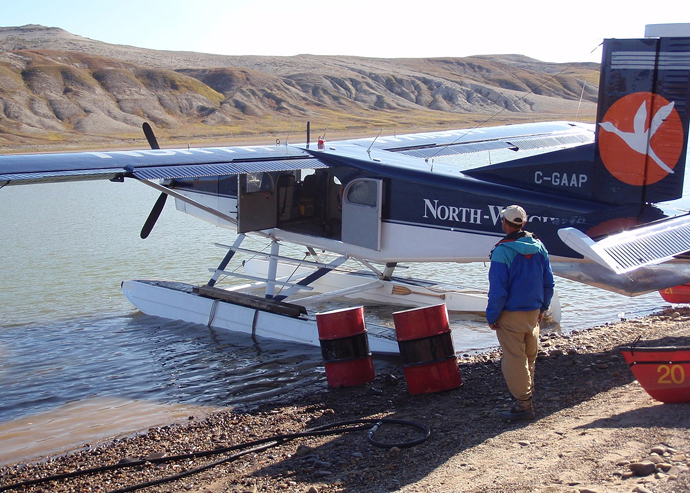 McFadden and Lamberson and companions met the bush plane at Franklin Bay on the Beaufort Sea for the flight back to Norman Wells. They shared cabin space with barrels of Jet-A fuel, needed to refuel the airplane for its return flight. 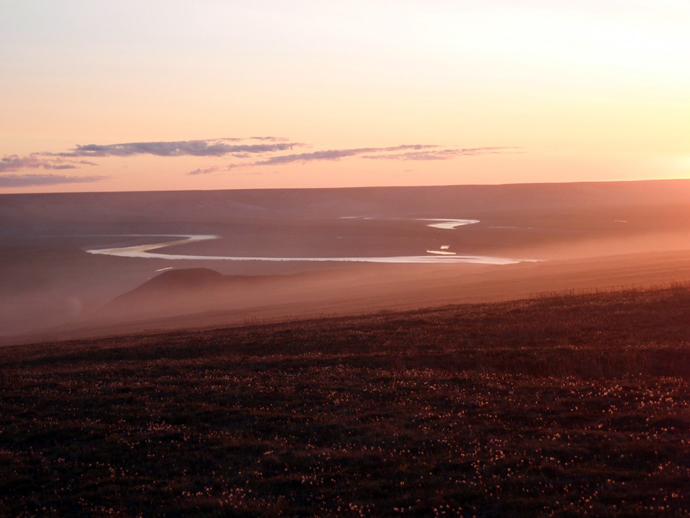 The Horton River, which they had just traversed by canoe, as seen from one of the hills along the coast.