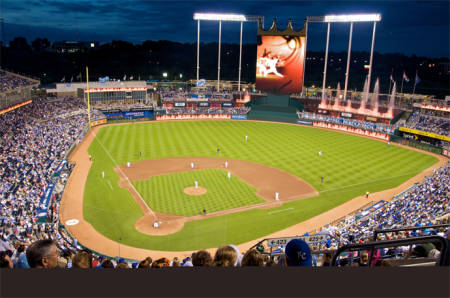 Kauffman Stadium at night. A crew of 13 experts keeps the stadium’s grass the greenest in Kansas City.

Graduates of CAFNR’s Turfgrass Science program can go far. Curt Mayes, an alumnus of the program, is the grounds manager of the Kansas City Royals baseball team. In this position he oversees the overall operation of the natural grass field at Kauffman Stadium. Mayes is a 2001 graduate of Monroe City High School. He discovered his love of turf and landscaping during summers caring for local lawns and at Mosswood Golf Course and Lions Club Field.

During his education at the University of Missouri he spent a summer at Roger Dean Stadium, the spring training home of the St. Louis Cardinals and Florida Marlins. After graduating, he landed a job with the Kansas City Royals on the grounds crew. He spent six years on the day crew and was promoted in 2012 to assistant head groundskeeper. His wife, Liz, is a middle school health and physical education teacher in Lee’s Summit School District. They have a son, Sawyer Lane.

What got you interested in working in this area? 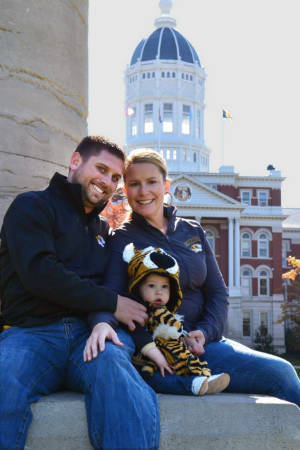 I became interested in the turf industry after spending three summers back home in Monroe City working for Wink’s Lawn Service. At the end of the third summer I decided to transfer from the business school to CAFNR. I loved working outside and the different types of work I was doing from mowing, installing and pruning landscape beds, and irrigation work. Growing up our neighborhood was always full of kids playing whatever sport we had enough to make teams for, so transferring into the sports turf program allowed me a way to stay involved with sports and also continue doing something that I enjoyed.

What was a memorable moment in your education at MU?

I have many great memories from MU from the guys that I met in my degree program who are taking care of sports fields all over the country today. I also appreciate the knowledge of the turf industry that was shared with us by Brad Fresenburg. I also met lifelong friends from my time working at the Rec Center on campus for the Rec Sports program. Outside of the classroom and working at the Rec Center I always enjoyed Saturdays at Faurot in the fall. Now that I have a family of my own I can’t wait for my son to be old enough so that I can take him to a game and see the excitement on his face for the first time.

What do you most love about your job?

There are so many great things about working in Major League Baseball that it’s hard to pick just one thing. First of all, I get to work outside every day. While I do have office responsibilities there is still a majority of my day spent outside. My first year in my current position was 2012 which was the year Kauffman Stadium hosted the MLB All-Star Game. Not only was it an awesome experience to be around all of the big name players at the time, I was also able to have the opportunity to work alongside Brad Fresenburg (assistant extension professor of plant sciences) and Josh McPherson (sports turf manager for the Mizzou Tigers), who my boss Trevor Vance (director of groundskeeping and landscaping) had invited over for the week. That week we had six people that had ties to the Mizzou Sports Turf program on our crew. One other thing I love about my job is being around the guys every day and seeing a different side of them than the common fan sees, most of the guys in baseball are great guys to be around and seeing them before everyone is screaming from the stands for a ball or autograph allows you to see what kind of person they really are. 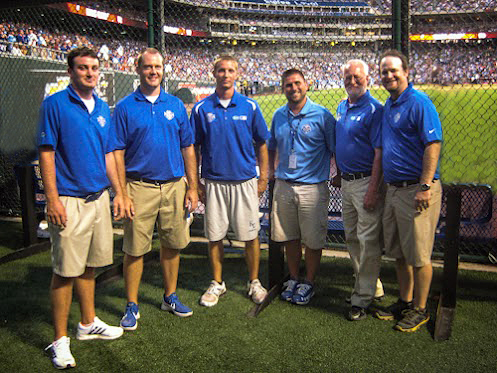