Students this fall in Mumford Hall didn’t get their traditional “Good morning, econ fans” greeting. That’s right, Jan Dauve, teaching professor of agricultural and applied economics, and director of undergraduate studies and adviser chair for the department, has retired.

Dauve estimated he taught more than 17,000 students in applied micro and macroeconomics during his time at the university, which, he says, was precisely 27.1 years.

One of those students is now a colleague – Scott Brown, research assistant professor of agricultural and applied economics. Brown said Dauve stood out for many reasons, but among those – one still stood out. 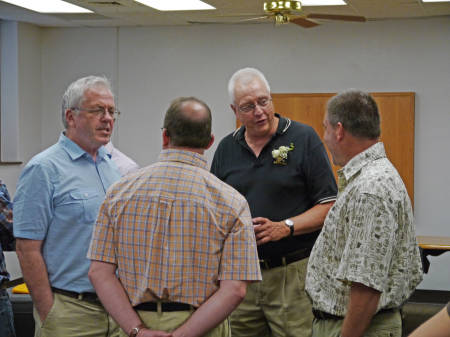 Dauve visits with colleagues at a reception in his honor on campus.

“I think it’s the mentoring aspect,” Brown said. “He gives good advice but he doesn’t push his advice. He gives you the medicine you need to take. He knew students are all different. They all make different choices and he didn’t penalize them for those choices. He sees the broader picture.” Brown said he joked that the carpet in front of Dauve’s office door was worn out from the number of visitors he’d have each day.

“It was students, but faculty too,” Brown said. “I don’t know sometimes how he got anything done. But he loved it.”

“He balances caring and empathy with rigorous academic expectations,” she said. “He is there to help a student succeed, but never at the expense of lowering expectations or learning outcomes.”

“He would always engage us in class, even if I didn’t want to,” Brown said. “And it went far beyond the classroom.”

Not Just a Student Number 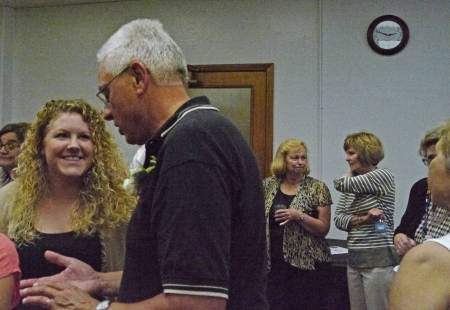 Dauve chats with Beth Nordwald, a former student who spoke at his reception.

“You were always a ‘name’ and a ‘face’ with Dr. Dauve, never just a ‘student number’,” Wilcox agreed. “Dr. Dauve always found a way to make a personal connection for students to the course content, the activities available to them, or potential career choices. In addition, he was always pushing and encouraging you to strive for more for yourself – helping you push out of your comfort zone just enough to find a new world of possibilities.”

“Dr. Dauve listens to students and exhibits genuine joy when interacting with them,” said Beth Nordwald, graduate student in agricultural economics. “He makes them feel important, valuable and worthy of his time. Dr. Dauve has a unique ability to connect with anyone. As an adviser, mentor and professor this means he could help and guide each person he encounters in a way that benefits them the most.

“In a fast-paced world he was able to slow down and connect with students, being fully in the moment.”

Classes grew in size as the years passed, Dauve said.

“It was nice to have so many different students,” he said. “It also forced me to consider different presentation styles or techniques. As long as I was learning new things, I was generally happy.”

“He was such a perfect fit in our department,” Brown said. “He was most connected to the student side.” 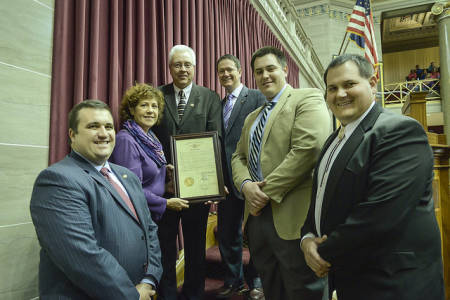 Dauve was honored in April at the Missouri State Capitol for his service. Photo by Tim Bommel, MO House of Representatives.

Dauve’s excellence was recognized by the University and the College many times throughout his career. He received the MU Faculty Alumni Award in 2012, the MU Outstanding Advisor Award in 2008, the MU Ag Alumni Association Citation of Merit in 2006, Governor’s Award for Excellence in Teaching in 2003, William T. Kemper Fellow in 2003, and Outstanding Undergraduate Teaching in CAFNR in 1998.

And what’s most amazing, to Brown, is that Dauve doesn’t seem to realize how much he influenced his students.

“He’s at the top of a lot of people’s lists,” Brown said of his influence as a mentor.

“It is hard for me to visualize CAFNR or the Ag Econ department without Jan Dauve,” Wilcox said. “He has impacted so many students over the years, earned multiple recognitions for his teaching and advising, and continued to do this with grace and humbleness.”

“Dr. Dauve was the front door of the home that is CAFNR. No matter if someone was in the College for a short time or here to stay for a while, Dr. Dauve met them with an open heart and cheerfulness – a positive first impression of CAFNR,” Nordwald said. “He gave students a positive experience, no matter what grade they had when they left his class. As he retires our home loses a large part of its charm and will have to be remodeled to accommodate the “”vacancy he will leave.”

On April 30 Dauve was honored at the Missouri State Capitol for his dedicated years of service to students at the University of Missouri. He was presented with the resolution by former student Joe Don McGaugh, now a member of the Missouri House of Representatives from the 39th District

In August faculty, staff and students were invited to a reception in Dauve’s honor in Mumford Hall. And just this past weekend, alumni roasted and toasted him at an event at Shakespeare’s South in Columbia.

“It was a great place to learn from some amazing people,” Dauve said of his time at Mizzou. “Bruce Bullock, Roger Mitchell and Mike Nolan are people who were inspiring during my time here. There are many in the department and across MU who are wonderful and exceedingly productive.” 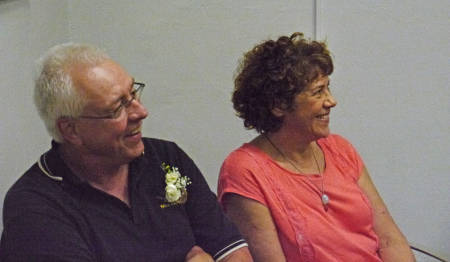 Dauve and his wife, Terri, enjoy the speeches at his reception.

Dauve already has plenty of plans to keep busy since retiring.

“First on the agenda will be to spend more time with my wonderful wife, Terri,” Dauve said. “I certainly plan on doing more fishing and a lot of it will be in the smaller lakes in mid-Missouri and I hope it will be very relaxing.” Other activities will include distant fishing trips, and working on the acreage he has outside of Columbia, he said.

“I am an MU grad and have been a fan for years,” Dauve said. “My affiliation has lasted for over 44 years and will be with me forever. Go Tigers!”

Colleagues and friends have established the Jan Dauve Fund for Excellence, in recognition of Dauve’s years of commitment. Learn more about honoring Dauve with a donation to the fund.

Question and Answer with Jan Dauve

“For years I had started class with some music playing and then when I stopped the music everyone knew it was time to start. I found myself not keeping up with current music as much so student interest created by the tunes was waning. I decided to stop the music but still wanted that clear sign class was beginning.  I tried ‘Good morning, econ fans’ and it seemed okay but I decided to try something different (something so successful I cannot remember what it was). Some students who had me before came up in a group and told me they missed starting the class with ‘Good morning, econ fans’ so I started again and have been doing it for just over a decade.”

“The Dauve dollar idea came from a meeting with Dr. John Kuhlman of the economics department. He had been teaching large intro sections and had developed quite a reputation. I found myself teaching the final few weeks of Ag Econ 50, a combined micro-macro course, because Dr. Boggs had severely injured his knee and was in the hospital. To try to prepare myself I visited with Dr. Kuhlman. He showed me some things he was working on. One of those was a short video which included his picture on a dollar bill as part of a montage. It stuck with me and years later I was trying to an in-class example and thought it would work better if there was actually an exchange taking place and that took me to counterfeiting.”

“The candy was an outgrowth of me reading about student engagement. I wanted to do something that involved the students. It started with a demonstration of marginal utility and how it works. The students seemed to like it so I expanded the use. Some did not care for it but most seemed to enjoy it and it did increase class participation.” 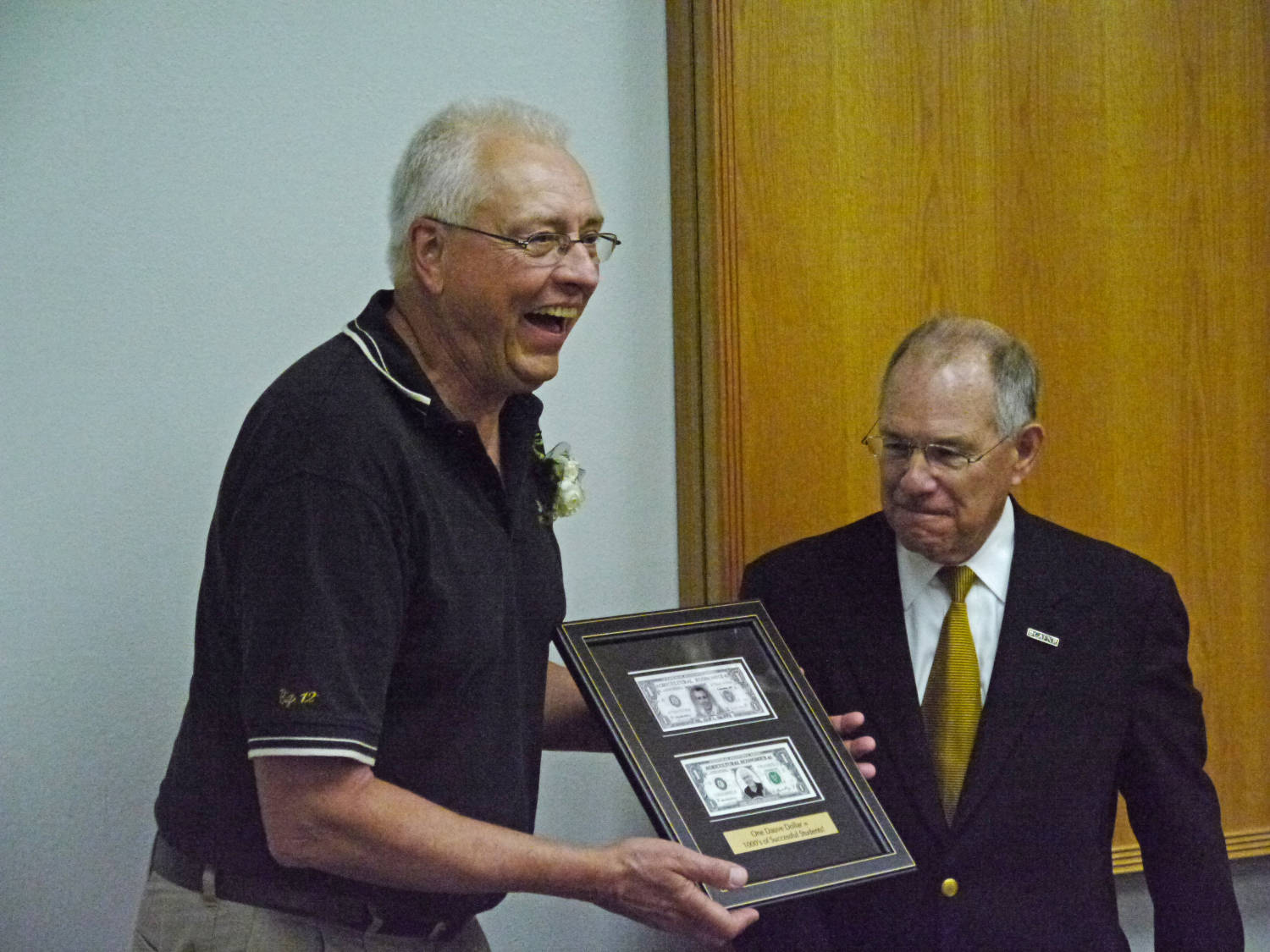